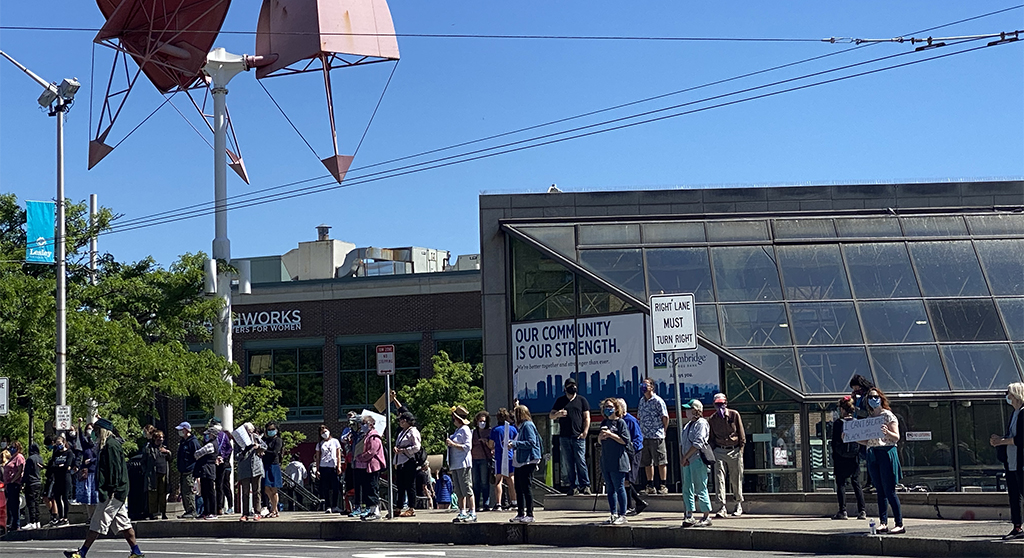 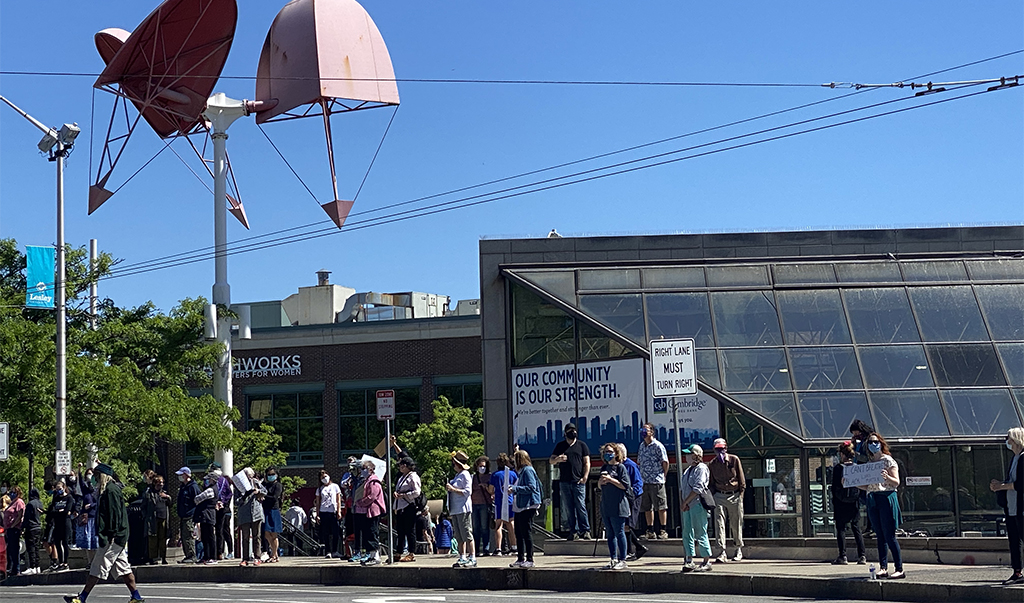 Protesters gather Sunday in Porter Square after a renewed spate of nationwide deaths of people of color at the hands of police. (Photo: Tom Meek)

Around 200 residents assembled along Massachusetts Avenue in Porter Square on Sunday to protest police brutality and ask for justice in the Memorial Day death of George Floyd in Minneapolis – and in countless other blue-on-black incidents nationwide. The video of police officer Derek Chauvin kneeling on the neck of Floyd has sparked protests across the country, many turning violent as people join with uncertain motives and police respond.

Update from June 3, 2020: Police officers estimate that the protest “maxed out with about 100 participants,” according to Jeremy Warnick, director of communications and media relations for Cambridge police.

Curfews have been imposed in 40 cities; the National Guard has been called to 15. Social media is pulsing with videos of looting and police violence.

Not in Cambridge, though.

Chants of “Hey, hey, ho, ho, these racist cops have got to go,” and “No justice, no peace,” filled the area as cars drove by, honking in support. Signs demanding justice and the end of police brutality joined a sea of “Black Lives Matter” placards.

The protest, organized by North Cambridge attorney Gerry McDonough through social media, was peaceful and without incident. McDonough, launching an activist group Stand Out Against Racism, or Soar, said the day’s event was one of many to come. At the rally portion of the event, he announced a day of action slated for Saturday, when smaller groups in neighborhoods would stage similar protests. 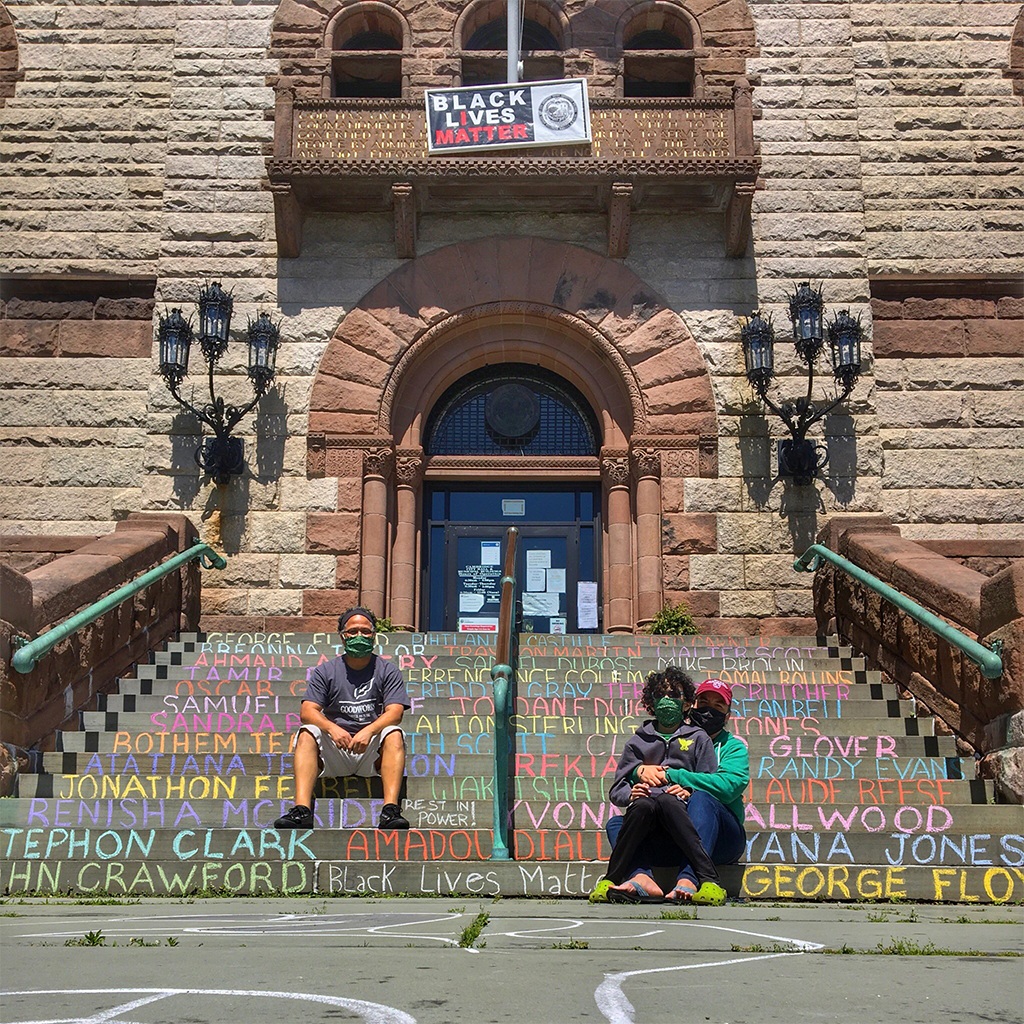 Other signs of protest popped up around the city, from a “BLM” tag for the Black Lives Matter movement spray painted on a building at Kirkland and Beacon streets to the names of people of color slain by police chalked on the steps of City Hall. The names stretched back at least as far as Amadou Diallo, killed in New York in 1999.

One of the concerns of protests and demonstrations in the time of the Covid-19 pandemic is public safety and social distancing. All demonstrators present wore masks, but a 6-foot rule was rarely achieved.

Mayor Sumbul Siddiqui said Saturday that she was planning an online vigil. “Facilitating a community healing process will be one of our most important jobs as elected officials, so we can collectively address the pain of this pandemic, the pain of this moment and the generational pain many of us carry in our bodies every day,” she said via social media.

Plans for the vigil, made public over the weekend, have it taking place from 5 to 5:30 p.m. Monday on cable Channel 22 and via Facebook Live. Details are here.

“Like many of you, I am navigating waves of anger and sadness as I think about [Floyd’s] life, his family and community – and about this country’s history of criminalizing blackness. George Floyd’s death should not have happened. May he rest in power,” Siddiqui said.

Work with City Manager Louis A. DePasquale and police commissioner Branville G. Bard Jr. is ongoing on “how best to keep our community safe from violence,” she said. “We must also work to keep people safe from discrimination and safe from displacement.”

Bard commented briefly on Floyd’s death as well. “Make no mistake about it, George Floyd’s death was the result of depraved indifference.” Bard said online Wednesday before expanding on his thoughts after the protest. Speaking to fellow law enforcement officials via tweet, he said, “I hope we realize that it will take more than words to correct this! Action, and only action will help to reverse this.”