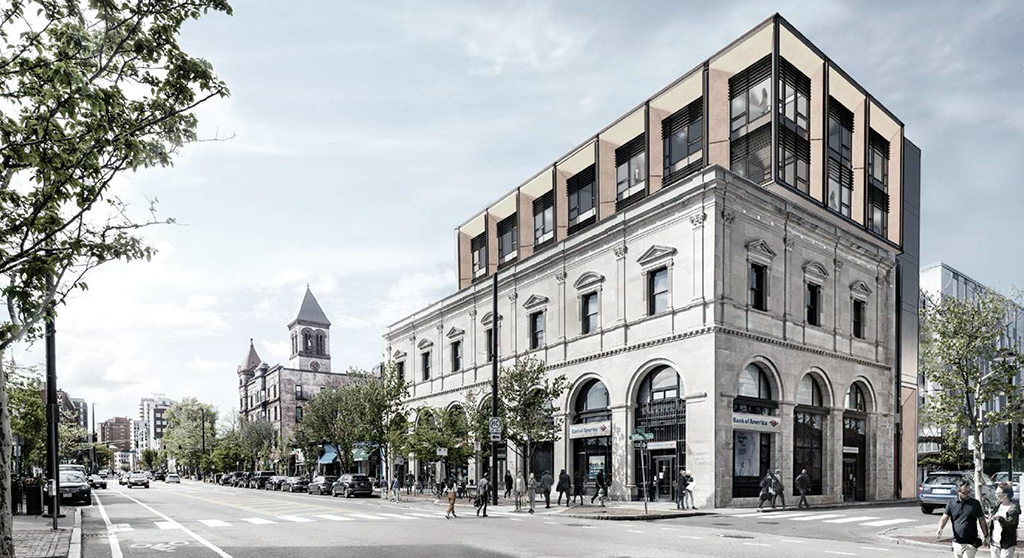 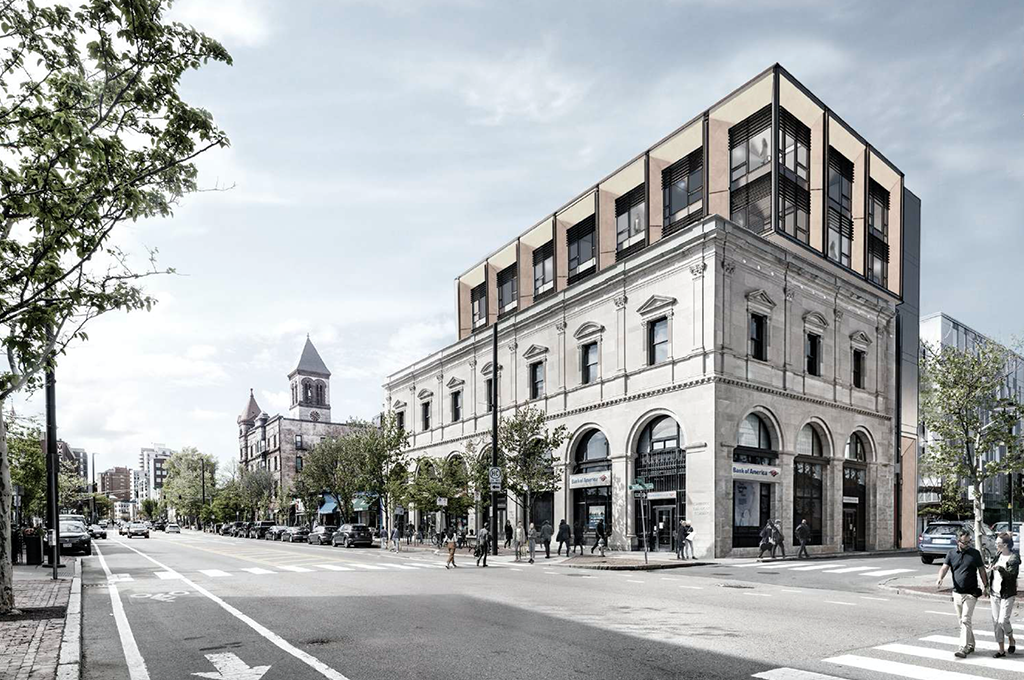 A proposed addition of three stories of hotel rooms in atop a historical Central Square building is to be discussed Tuesday by the Planning Board. City Hall is seen in the background of this rendering.

To see how to watch or give public comment at the week’s meetings, follow the links found in the agendas, which are themselves embedded as links in the names of each board or commission.

Reopening school in the fall

Planning Board, 6:30 p.m. Tuesday. The agenda holds talk of another proposed recreational pot shop – this one from the KG Collective for Mount Auburn Street by the Watertown border in Strawberry Hill, by a Star Market (convenient!). The more interesting item is about adding three stories of 37-room boutique hotel above Central Square’s historic 1912 Cambridge Gas and Light Building at Massachusetts Avenue and Temple Place. There would still be ground-floor retail (currently a convenience store and Bank of America, and the bank has a long-term lease), with the hotel entrance going on Temple Place. Two floors of office space will go between, for a total six stories. Televised and watchable by Zoom video conferencing.

Rules of the City Council

Government Operations, Rules & Claims Committee, 2 to 4 p.m. Wednesday. This committee run by Simmons plans to talk about the rules of the City Council. Televised and watchable by Zoom video conferencing.

Setting up a ‘caregiver university’

School Committee Communications and Community Relations Subcommittee, 12:30 to 2 p.m. Thursday. The committee plans to talk about setting up a “caregiver university” that would see the school department organizing and providing information to caregivers so they can be better “partners in the education of their children.” Watchable by Zoom video conferencing.

License Commission, 3:30 to 5 p.m. Thursday. Did you think the License Commission was going to keep meeting Mondays just because it did the past two times? Don’t be a sucker. It’s moved to a Thursday – for now – with no agenda posted, but with a promise to uphold Open Meeting Law by posting an agenda not later than 48 hours before the meeting. Now the commission stands out in two ways: It’s the only city board that can’t find a consistent time and day to meet or post an agenda in a timely way. Watchable by Zoom video conferencing.

Board of Zoning Appeal, 6 to 11:30 p.m. Thursday. Amid a long agenda: The board will consider a plan to turn the Polish Club at 747 Cambridge St., Wellington-Harrington, into a mixed-use building with 1,500 square feet of ground-floor commercial space and eight apartments overhead. More controversial is the continued hearing on a variance to build a 29-unit micro-studio apartment building above 544 Massachusetts Ave., Central Square, displacing the Studio@550 dance space. Watchable by Zoom video conferencing.