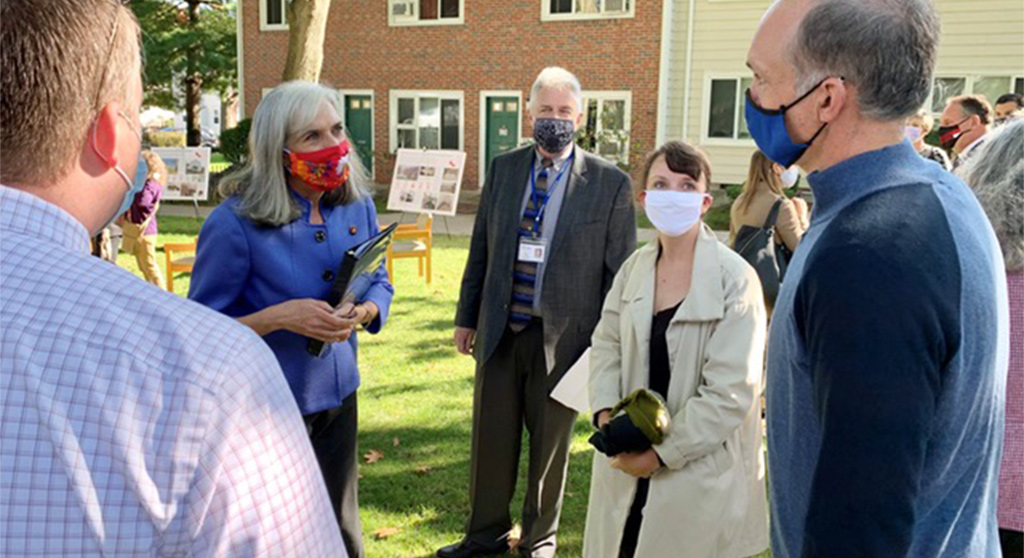 The Cambridge Housing Authority says it faces a delay as long as 15 years in some of its remaining public housing modernization projects as well as in plans to build new affordable housing, unless Congress approves a proposal to remove limits on a key element in its financing strategy. U.S. Rep. Katherine Clark, one of the bill’s sponsors, launched a campaign to approve the legislation on Oct. 6 at CHA’s Corcoran Park public housing development.

All in all, a total of 526 existing units that need renovation and 444 potential new apartments could be delayed because of the problem that Clark’s bill would solve, the housing authority says. After redeveloping about 1,000 units since 2013, despite dwindling federal support, “we’re up against a roadblock now” in finishing an ambitious plan to modernize the agency’s entire portfolio, executive director Mike Johnston told agency commissioners Wednesday.

The agency needs to renovate its public housing – one of the few resources in expensive Cambridge for very-low-income families and individuals – because continuing deterioration could make it uninhabitable, agency officials have said. The revitalization program aims to preserve the housing for the next 40 years.

Without federal money, Cambridge turned to private investors under the Department of Housing and Urban Development’s Rental Assistance Demonstration program. Financing depends on CHA getting federal tax credits for low-income housing, which it can sell to investors who want the tax break. The agency can also borrow money from banks with the aid of tax-exempt state bonds known as private-activity bonds, which finance affordable housing and other projects.

Being awarded the state bonds entitles the authority and other affordable housing developers to get a certain amount of the essential low-income housing tax credits to sell to investors. The roadblock arose because there’s a cap on the state bonds, and increased development in recent years means demand for the bonds exceeds the maximum.

“We’re bumping up against this cap,” Johnston said. For example, the renovation of just one project, Jefferson Park Federal in North Cambridge, scheduled for 2022, requires $100 million in state bonds – about one-third of bond agency MassHousing’s entire allocation for the year, Johnston said. “It’s a big ask,” he said.

Clark’s bill would solve the problem by exempting developers of federally assisted affordable housing, such as the CHA, from the bond cap. That would open the gate to $445 million in state bonds for the entire preservation campaign, Johnston said in an email. “We have the ability to save/create almost 1,000 units of affordable housing. But without this legislation, if I have to squeeze my way into the pipeline to get access to $445 million of bonds, it would take 10 to 15 years. We currently have discussions underway to get the bonds necessary for Jefferson Park in 2022 and folks know that Corcoran Park and Roosevelt Mid-rise [in East Cambridge] are right behind. But remember, the whole state gets about $675 million each year, and we are just one player in the state.”

The bond cap has plagued the agency since 2016, when it unexpectedly threatened to stall the revamp of the agency’s second-largest redevelopment project: Manning Apartments, a senior housing site in Central Square. As financing was about to be finalized, authority officials learned that the state bond agency wasn’t going to allocate enough bonds to meet the need. Scrambling to save the project, CHA offered to reduce the bond amount and finance the project over two years, and the bonding agency agreed.

Since then, the schedule for other redevelopments has lengthened as CHA and bond agency officials negotiated over how to deal with the cap.

West Cambridge’s Corcoran Park, with 153 apartments, is one of the developments that could face delays in revitalization. Ample land at Corcoran Park would allow the agency to build an additional 50 units, Johnston said.

Clark’s bill has bipartisan support from co-sponsors Rep. Gil Cisneros, a California Democrat, and Republican Rep. Kenny Marchant of Texas. “Right now not a lot is happening in Washington pending the election. At some point bills are going to move,” said CHA general counsel Susan Cohen, who worked with Clark’s staff on the bill.