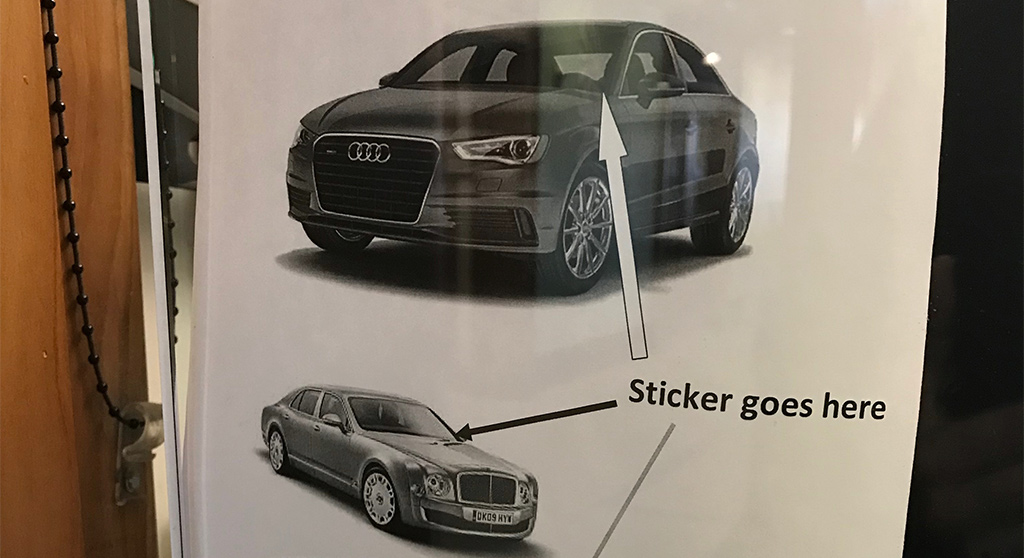 An explanation of resident parking sticker placement posted in the City Hall Annex in 2018 shows high-end cars, including an Audi and Bentley. (Photo: Marc Levy)

A proposed $15 parking sticker fee hike was rejected Monday by city councillors piqued that city staff ignored their own two-year-old request for a look at the same topic that exempted low-income residents.

Raising resident parking permits to $40 from $25 – the price since 2013 – would bring in a half-million dollars and help make up for annual $6 million loss estimates to the city’s parking fund as coronavirus discouraged driving into and around the city, City Manager Louis A. DePasquale said.

But it was immediately obvious there would be problems winning approval.

“I read this agenda item with interest because we held a meeting on this very topic [in] 2018,” vice mayor Alanna Mallon told DePasquale and Joseph Barr, director of the city’s Traffic, Parking & Transportation Department. “I stated that I couldn’t support an increase in permit parking fees that does not consider those who have a financial need. This agenda item two years later speaks to declining revenues, but not to the City Council order.”

Asking whether there were a companion proposal that took lower-income residents into account, Mallon continued, “I understand our revenues are being impacted by Covid-19 – parking ticket revenue is down, our parking meter fees are down. [But] how are we looking at this without even talking about a needs-based assessment when it was very, very clear two years ago that this council was interested only in putting this forward if there was a needs-based application process?”

No time this year

Barr agreed that there had been a “clear message” and said his department was “committed to heading in that direction” – and not just the next time additional revenue was needed, but sooner.

But there was no time this year to explore setting up a system to determine who would be charged the $40 rate and whose finances warranted a lower rate, he said.

“This is really in the immediate moment about revenue,” Barr said.

DePasquale agreed that bringing forward the proposed increase “was a decision made as we looked at our numbers and said, ‘We can’t wait, we have to at least try to move this forward.’”

At first it wasn’t clear whether the council’s 2018 order had been remembered and made part of staff discussion of the proposed increase, but DePasquale offered a vague assurance that “We talked about that when we met.”

Cambridge car registrations seem to have peaked in recent years at 41,000 in 2003, and in more recent years has been closer to around 38,500 throughout the November-to-August permits issuing season. Two years ago when the council’s Ordinance Committee discussed charging more for passes, only 34,823 had been issued, though Barr expected that to rise as students returned. For this sticker renewal season, though, fewer students were in the city.

There was some support for passing the increase – such hikes have been discussed in the past as ways to encourage residents to get rid of their cars, and councillor Dennis Carlone called the permits “the biggest bargain in the city at $40” – but it became clear that too many councillors were irritated by finding another order of theirs had been seemingly blown off by city staff.

“We’ve known that parking revenues were going to be down for months. This is not new,” councillor Marc McGovern said. “And now two months before the end of the year, we’re being told that we have to move on this now, without the means testing we asked for two years ago?”

Councillor Jivan Sobrinho-Wheeler made his displeasure if anything more explicit, even while signaling he would vote to approve the increase. “At the end of the day it’s $15 more – but I wish staff and administration would take policy orders that council passed seriously and acted on them,” he said. “The council wanted to do this intentionally, and that that wasn’t done is really disappointing.”

Along the way the councillors affirmed that people 65 and older weren’t charged for their resident parking passes, and residents paying for a resident parking pass got a visitor parking pass (also valued at $40) for free. They also made various suggestions on avenues to explore toward raising more money on fees without hurting those already struggling. Voluntary donations through property tax payments was asked about (though a current system of contributions brings in little money) along with voluntary payments by well-to-do seniors, rates based on the age of a car and a needs-based eventual reimbursement.

It marked the end for an increase in fees for the 2021 renewal season. “The city does not have plans to revisit this issue this fiscal year,” said Lee Gianetti, Cambridge’s director of communications and community relations.