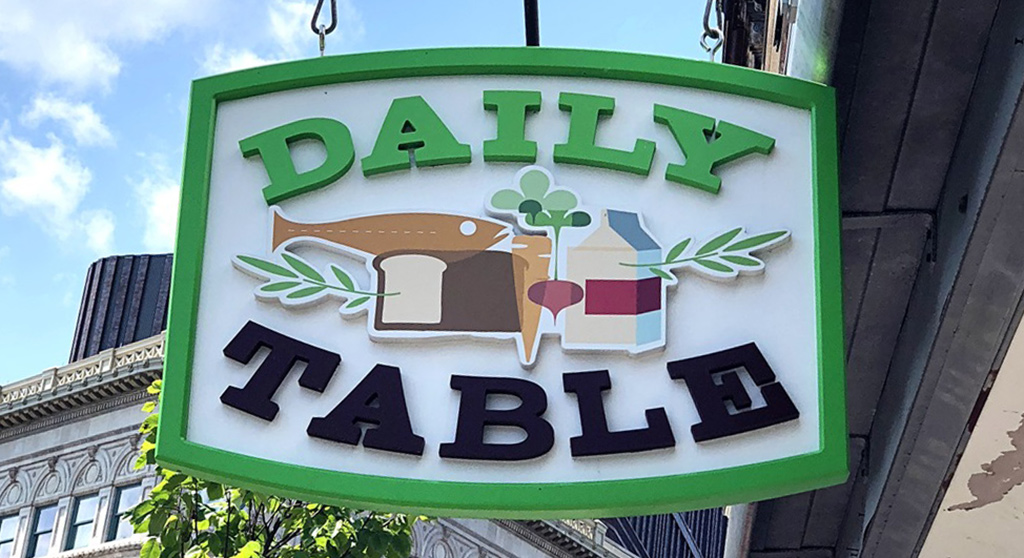 A Daily Table grocery store is due to open in Central Square in the first half of January, the third site for the nonprofit community grocer with a mission of making healthy food affordable to everyone.

Founded by Doug Rauch, former president of Trader Joe’s, the small chain opened its first stores in Dorchester in 2015 and Roxbury in 2018 – the year Central Square and its surrounding neighborhoods lost a University Park Star Market in February, only to see the Harvest Co-op shut down in October after 44 years.

“We are extremely excited about Daily Table,” said Michael Monestime, executive director of the Central Square Business Improvement District, which worked with the landlord to get the lease signed. “It’s the first we’ve helped to pen as curators for what happens on Massachusetts Avenue.”

Michael Malmberg, chief operating officer of Daily Table, said he expected construction to be done next month on the 3,000-square-foot sales floor at 684 Massachusetts Ave. – replacing an Au Bon Pain that closed in December – in time for managers to begin hiring. They plan to interview locally and pay at the same $15.69 starting rate as at the other stores.

Daily Table has been looking for as much as a year and a half for its third location, and as far away as Lynn, Lawrence and Lowell. But Food for Free, the Cambridge nonprofit based at 11 Inman St., is a partner with the chain. When executive director Sasha Purpura talked with Monestime about Daily Table, he “got super excited, reached out to us and quickly showed us a bunch of available spaces in Central,” Malmberg said. Company research into such things as Supplemental Nutrition Assistance Program enrollment rates confirmed that the location made sense for Rauch’s mission, formed during a fellowship program at Harvard University’s Advanced Leadership Initiative.

“Cambridge certainly has a different reputation in terms of its socioeconomic makeup, but there is a very significant population, particularly in and around Central Square, that is low- to moderate-income and probably experiences food insecurity at various points of the month or even all the time,” Malmberg said.

The chain has a lease of up to 15 years and plans to be in the city indefinitely. “We’re committed to the location. It takes a lot of investment to put in a grocery store with all of the refrigerated equipment and electrical work,” Malmberg said.

The space is small – Roxbury, by comparison, is 4,100 square feet; Dorchester is 3,300, but holds a commissary kitchen that provides heat-and-eat and prepared foods throughout the chain. (Before coronavirus, prepared foods amounted to about 15 percent to 20 percent of Daily Table sales. It’s now much less. “The hypothesis is that people are cooking more at home, eating out less, have more flexible schedules and they’re trying to save money,” Malmberg said. “Although our foods are extremely affordable, prepared food still costs more than buying produce.”)

Despite being not quite a full-service grocery, with only 600 kinds of products on its shelves – “a rounding error to a Stop & Shop,” Malmberg said – Daily Tables manage their space efficiently to serve people without time to stop at more than one store. “We don’t have 12 kinds of mustard or 30 kinds of pasta sauce. We have a few limited selections of the basics at great values,” he said. Going lighter on center-of-the-store items allows for more of the healthier foods shoppers find around the edges of larger retailers, including fresh meats and what Malmberg calls the “best prices on fresh seafood in town.”

The approach has changed since Rauch’s initial concept of stocking food that was donated, discounted or rescued because larger stores considered it damaged or ugly. Now more food is bought at lower rates made possible by Daily Table’s nonprofit status. “We supplement those with those opportunity buys and a little bit of a treasure hunt aspect,” he said. “Our procurement team is often finding great deals on surplus inventory that we can sell at a fraction of the cost, even higher-end natural products. We sell as much as we have, then it’s gone and something else will come and take its place.”

While most of Malmberg’s work experience is with nonprofits and farms, he spent more than a year with Amazon in New Jersey at one of the retailer’s highest-volume fulfillment centers. “It was a great learning opportunity. Amazon is very frugal in their approach to problem solving, and that certainly applies in the nonprofit setting where you have to think about how you continually do more with less,” he said. It may be no surprise Daily Table managed to keep toilet paper on its shelves into April, after coronavirus stripped supplies across the industry. “We actually had employees and customers taking selfies with it,” he said.

It’s impossible to say what will happen as coronavirus resurges, but if Cambridge is in lockdown as Daily Table opens in 2021, the store expects to be prepared with third-party delivery for food bought with SNAP benefits – an option available to only a handful of retailers nationally, and in Massachusetts now limited to Amazon and Walmart. “We are really pushing hard to set this up” with the U.S. Department of Agriculture, Malmberg said. (In-person shoppers, meanwhile, shouldn’t be put off by a requirement imposed by the IRS: Technically, Daily Table is members-only. But “membership” is free and virtually instantaneous at the register.)

“It’s affordable. It’s great food. Doug Rauch was the former president at Trader Joe’s – he opened 100 of them. The man knows what he’s doing. And I think for that location, and for Central Square, and because we lost Harvest, I think this is going to be out of a box – they’re going to kill it,” Monestime said. “I think they’re gonna do really well with an audience who need affordable grocery options.”