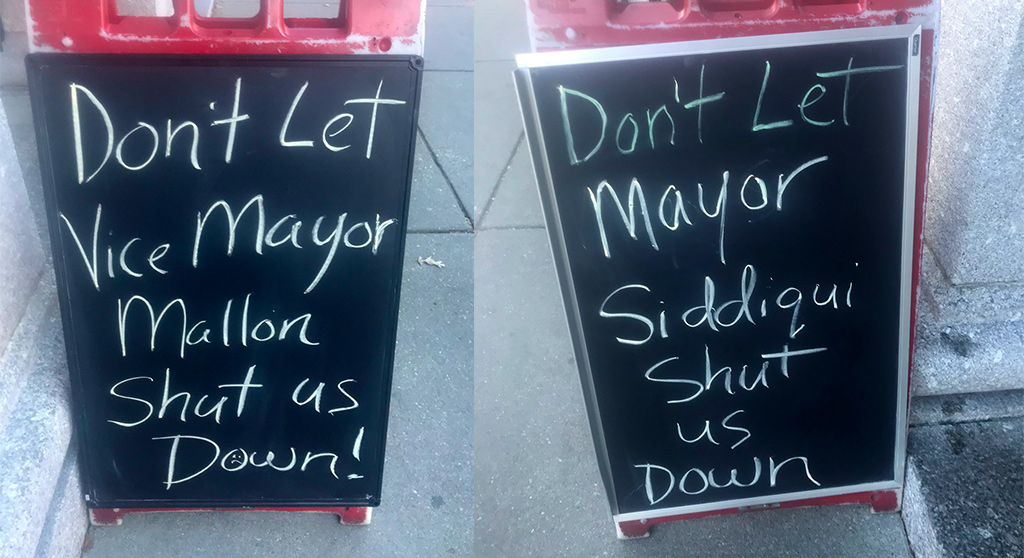 A photo tweeted Wednesday shows strong reaction in the business community to a City Council order about coronavirus that didn’t quite get discussed at the previous council meeting. (Photo: Kelly Dugas Coveney via Twitter)

An order that alarmed small businesses last week returns Monday to the City Council with some promised language meant to be less alarming. It’s unlikely to prevent a torrent of public comment, some spurred by the city’s business groups.

The end-of-meeting proposal by Mayor Sumbul Siddiqui and vice mayor Alanna Mallon was to look at shutting down nonessential indoor activities regionally in the hopes of reducing the spread of coronavirus. A small-business and restaurant relief program was part of the order, but a look at those details was cut off when councillor Tim Toomey invoked his “charter right” Monday to delay discussion by one regular meeting.

“A policy order of this magnitude at this hour, I just cannot support it,” Toomey said.

With discussion cut off, the text of the order that bothered people – that Siddiqui and Mallon wanted “to close indoor dining, gyms, casinos and other nonessential indoor activities as soon as possible” – went out without them being able to make clear that the city manager would first have to confer with the Metro Mayor’s Association to make the effort part of a regional solution. Though that part of the order came before a reference to “casinos,” readers such as Toomey for some reason fixated on the fact that Cambridge has no casino while ignoring the regional aspect of the order. There is an Encore casino in Everett, less than 5 miles from Cambridge.

Further, Siddiqui and Mallon said in a Friday letter, the order was directed at “high-risk indoor activities where people will be unmasked.”

“This recommendation does not seek to close any business completely. We are suggesting interventions. We would not recommend prohibiting any low-risk activities like retail,” they said.

The substitute order eliminates the distracting reference and adds the element of risk, to now say simply that the idea is “to temporarily restrict high-risk indoor activities, such as indoor dining and gyms,” while keeping the parts about conferring with the Metro Mayor’s Association and working to “organize a relief program to assist and financially support businesses affected by these temporary closures.”

“Measures to improve public safety only work when there is a regional approach. No city or town is in a bubble, and no one community can solve what is a growing regional and statewide problem,” Siddiqui and Mallon said in their letter.

Also staying in the order is the rationale behind it: Cambridge Public Schools has a trigger for shutting down in-person learning based on coronavirus metrics. The order was framed as a call to “take action to restrict the activities of nonessential businesses and gatherings in order to keep our schools open,” and many responses targeted Siddiqui and Mallon as pitting schools vs. small business, especially after a proposed change by councillor Quinton Zondervan.

“The more people are indoors in an enclosed space at the same time, the higher the likelihood of transmission is. It’s really critical that we reduce those opportunities as much as possible wherever we can. So I hope that my colleagues will consider potentially amending this order so it actually calls on the city manager to close these indoor spaces immediately,” Zondervan said.

The Harvard Square Business Association responded quickly, sending out a Tuesday email with the subject line “City Council pitting businesses against schools,” and a weekly meeting of restaurateurs organized by Kari Kuelzer of Grendel’s Den devoted two hours to the topic. Grendel’s was forced to close Friday after members of its staff tested positive for Covid-19.

One business set out chalked signs urging passersby not to let the mayor and vice mayor – identified by name – “shut us down.”

Odd note from the Chamber

A letter from City Manager Louis A. DePasquale went out Wednesday suggesting there would be no rush to act. “It is very difficult to show causal linkages of transmission directly attributed to any one activity, like indoor dining or gyms,” it said.

But that reassurance didn’t end the alarm. The Chamber of Commerce issued a statement Thursday, followed later in the day by a Cambridge Local First video call attended by more than 40 members, leaders of nonprofits and small-business owners, most expressing upset and some angry. Two representatives from the City Manager’s Office, Bob Reardon and Matt Nelson, were on hand to answer questions and report back to DePasquale.

The chamber letter took a direction surprising for an organization led by former longtime city councillor David Maher, describing the workings of city government in an unrealistic shorthand. “As written, and if adopted, the order would have a significant impact on small businesses – essentially shutting down all non-essential businesses in the City of Cambridge,” said the letter signed by Maher, chamber chief executive and president, and Nancy Donohue, its director of government and community relations. It continued by making a curious argument about being a lower-risk community: “While the increase in positive tests are concerning, the data and the metrics need to be put in perspective … as the city conducts more testing, more cases are going to be identified.”

Cambridge Local First executive director Theodora Skeadas said she spent “countless hours on the phone” this week talking with members and CLF directors to hone the organization’s response, and was in touch with the mayor and vice mayor as well. On Saturday, she shared their letter with her organization’s members, including its expression of anticipation for a more thorough discussion Monday and the comment, “A temporary restriction on indoor dining and other indoor high-risk activities only works if there is a firm commitment from the city to provide relief funding. These are tough times, but Cambridge is fortunate to have the resources to weather this storm.”

But there was skepticism over that funding. “It’s clear that there is no financial package that the city can offer our businesses to keep you all afloat. It really cannot be a municipal decision, it has to come down from the state,” said Jason Alves, executive director of the East Cambridge Business Association, during the CLF call.

Members had alternate suggestions, including already available 15-minute, self-administered tests that Kuelzer said she’s been urging action on since September; others advocated prominent administering of some $300 fines to people who refused to wear masks – an option police have had since April but say they have not used.