‘Let Them All Talk’: A supposedly fun thing that’ll keep you diverted until the unpacking 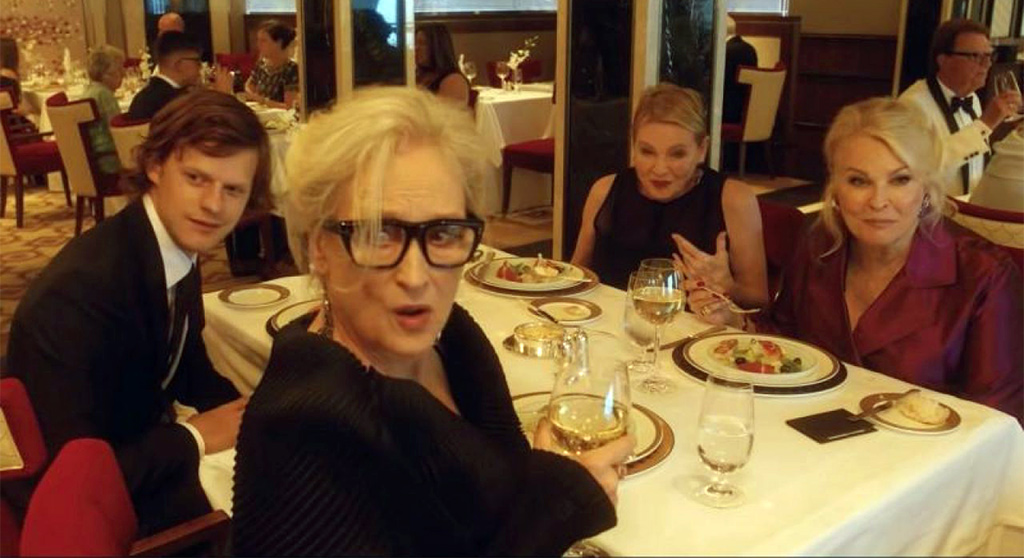 ‘Let Them All Talk’: A supposedly fun thing that’ll keep you diverted until the unpacking

I’ve never been on a cruise ship. I’ve marveled at the behemoths sailing into the Black Falcon Terminal in the Seaport, I’ve drunk in many moments of deck-perched merriment on friends’ social media posts, read David Foster Wallace’s semi-famous essay “A Supposedly Fun Thing I’ll Never Do Again” and enjoyed those peculiar and perplexing murder mysteries at sea that crop up on true crime investigative shows now and then – but I have yet to be part of a floating colony. In my heart, I feel I mostly align with Mr. Wallace, remaining tepidly cruise curious. Thanks to “Let Them All Talk,” the latest from Steven Soderbergh, cinema’s official auteur of quirky cool, my wan curiosity has received a reinvigorating shot.

Soderbergh, the man who made the “Ocean’s Eleven” films as well as such experimental fare as “Unsane” (2018) and “Bubble” (2005), slides toward more the latter here. He gets Meryl Streep aboard the Queen Mary 2 luxury liner en route to London as Alice, a Pulitzer Prize-winning author who can’t fly – Alice is a solemn sort, set in her ways, and won’t take the cruise unless her publishers give her top accommodations. Her besties from college, Susan (Dianne Wiest) and Roberta (Candice Bergen), get to tag along, as well as her nephew, Tyler (Lucas Hedges, who in “French Exit” opening later this year, again crosses the Atlantic; it’s by different means but with an equally complicated and mature woman of stature). The film, an improvisational bit formed from a short story by writer Deborah Eisenberg, has its moments: Roberta refuses to do any one-on-one time with Alice; there’s a strange man coming out of Alice’s cabin each morning; and adding to the mix is Karen (Gemma Chan, who provided a graceful, stately presence in the otherwise riotous rom-com “Crazy Rich Asians”), who’s from the publishing house and wants to educe another prize winner from Alice. Overall it’s choppy seas, though, lacking earnest, emotional cohesion. Sure, there’s a lot of suppressed emotion seeping through strong performances, but the material and devices never quite seem to warrant the requisite outpouring. It feels like a Robert Altman movie without a maestro of mass mania to wave the baton.

Though everything is tied together with twists and revelations, back on firm ground one might wonder if the journey was worth the trip. From what’s onscreen you can imagine Soderbergh and his cast had a rollicking good time making the film, and the boat they chose was not a floating family theme park, but one with stately dining rooms and libraries with dark wood carousels overlooking scenic vistas of the ocean. That’s my cruise. Will I ever take it?

“Let Them All Talk” streams on HBO Max.