‘Unsane’: Soderbergh and stalker victim Foy become danger to themselves in genre flick 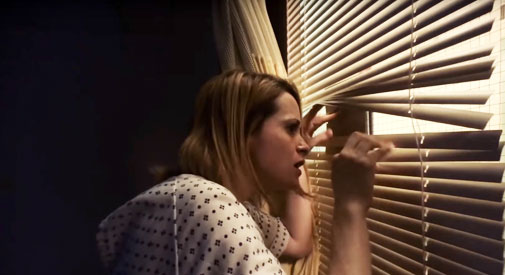 ‘Unsane’: Soderbergh and stalker victim Foy become danger to themselves in genre flick

There’s little room for debate that Stephen Soderbergh’s one of the most intriguing directors working (Paul Thomas Anderson and Nicolas Winding Refn are also on that list, to give you a taste). There’s not much the “considering retirement” auteur hasn’t tinkered with: non-professional actors (“Bubble”), a “serious film” staring a porn actress (“The Girlfriend Experience”), a Liberace biopic (“Behind the Candelabra”) and of course more mainstream fare such as “Traffic” that scored him an Oscar. Many of Soderbergh’s films, such as “Magic Mike,” the “Ocean’s” films and “Logan Lucky,” possess a playful wit. He seems to be able to conjure up a hip nod and a wink on a dime and adroitly inject a seam of bleak reality as need be (see “Contagion,” or “Sex, Lies and Videotape”). Here Soderbergh tries something new – not groundbreaking, to be sure, but genre-savvy nonetheless and shot on the down low with iPhones (not new, as Sean Baker did a similar trick for his quirky indie gem “Tangerine”). Despite all those curiosity-piquing tags, the result’s a muddled mix of great performances, edgy atmosphere and infuriating “is this really happening” plot twists. 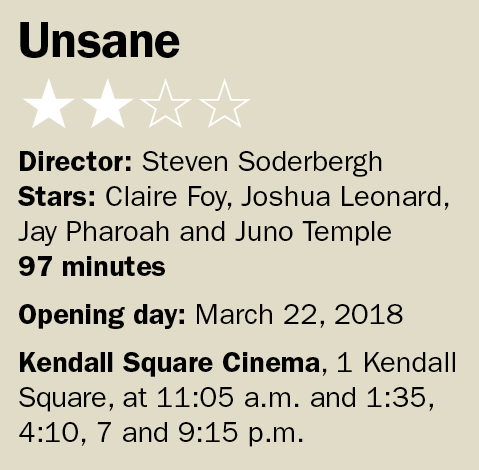 If you’ve caught any of the trailers for “Unsane,” you might think it’s somewhere between ’80s (well 1979, to be exact) B-roll from “When a Stranger Calls” and M. Knight Shyamalan’s “Split” (2016). It lies somewhat closer to “One Flew Over the Cuckoo’s Nest” with elements of the aforementioned flicks sprinkled in, and it’s a tough movie to discuss without spoilers. We meet up with the gloriously named Sawyer Valentini (Claire Foy from “The Crown”) a young woman who works a generic job in a generic office with a married male boss whose mawkish demeanor and suggestion for a team trip – just them two – verges on a #MeToo violation. Sawyer, no pushover, seems to know how to control the situation and exits with an awkward, “I should get back to work.” She also seems to know what she wants, hooking up with a guy on Tinder, telling him the night will go his way, but in the morning he has get out and forget they ever met. Back at Sawyer’s pad just before the event goes down, Sawyer has a breakdown. Said dude, wise to the cloud of dysfunction, exits and then, through late-night Google searches for support groups and therapists, we learn that Sawyer has been the victim of a stalker up in our blessed Boston and relocated to a Pennsylvania burb to escape her pursuer’s reaches.

It’s unclear as to how far in the past the stalking occurred and if Sawyer had been in therapy, but she ends up at a hospital for treatment and unwittingly (they’re template forms, basic stuff, the therapist tells her casually) signs paperwork that voluntarily commits her for observation. She calls the police and later her mom (played with stoic, matronly charm by Amy Irving – who’s not onscreen enough), but they’re powerless to extract her. There’s a whole “American Horror Story” vibe that feels like things might erupt into a bloody shop of horrors at any point (though the scariest aspect remains the insurance scam that imprisons Sawyer against her will), but Soderbergh and Foy hold us close to reality, at least for a while.

Ultimately the cards tip and what ensues is pure pat genre – fisheye and distorted lens shots, the stumbling heroine in the woods and all – that hits some ludicrous notes in its attempt to freshen up old tropes. Foy holds the film together throughout, selling the major plot device of Sawyer’s unreliable POV with surefooted credibility. The couch trip gone bad almost works, but in the end, the eye-roll quota is too high to swat away. It’s too bad, too, because these two talents are capable of more than this.

It’d be great if they got a do-over and did something else – a period piece, perhaps?