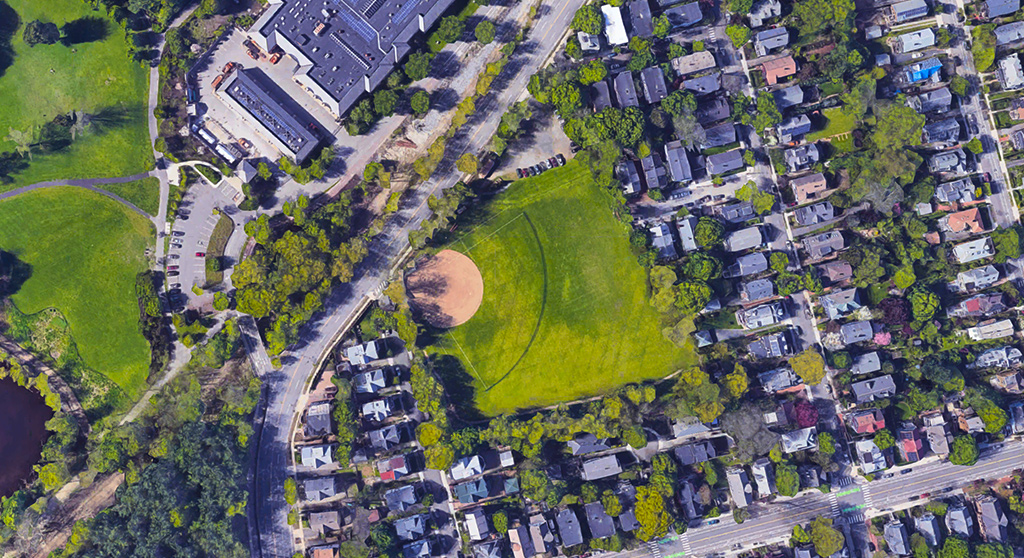 The city plans to buy the 4-acre Buckingham Field in West Cambridge, with its permanent use to be decided later. (Photo: Google)

A vote Monday locks in spending $18.5 million for a friendly land taking of the 4-acre Buckingham Field in West Cambridge, but not its use as permanent open space – a distinction that was crucial to several of the eight city councillors who agreed to the purchase.

The holdout was Tim Toomey, who said he was “distressed and dismayed” to see the city manager’s request for a field in an area that already held much of the city’s open space. The land, used by the Buckingham, Browne & Nichols private day school as a playing field, is at 185 Larch Road, directly across the street from Fresh Pond.

The school said in November that it plans to spend the sales money immediately, buying 6.1 acres on Grove Street in Watertown from Mount Auburn Cemetery as part of a planned 20-acre athletics complex. Cambridge’s part of the deal was needed to move forward this week, councillor Marc McGovern said he’d learned from the city manager.

Toomey, who has long complained about East Cambridge’s unfair burden of affordable housing compared with West Cambridge, was upset by what looked like a gift to residents and a business in an already privileged part of town.

“It is really striking for the city to all of a sudden be able to access $18 million in these very stressful financial times. To me it is really astounding,” Toomey said, noting that nowhere in the document shown to councillors did the term “affordable housing” appear, though there was a note that after three years the council would be able to use the land for any municipal use. (The term encompasses construction of affordable housing, city solicitor Nancy Glowa explained later.)

Toomey was also struck by the “unbelievable price [in which] Buckingham, Browne & Nichols gets the better of the arrangement,” considering that an assessment two years ago had shown a value of $6 million. “We can come up with $18 million for a wealthy private school who will now have a nice arrangement with the town of Watertown for almost exclusive use of open space.”

City Manager Louis A. DePasquale said that in his three decades in City Hall, including in service to two previous city managers, he’d heard councillors call repeatedly for open space to be bought whenever possible to supplement its shortage in a small, densely packed city – including newer calls for fields for games of lacrosse, cricket and soccer. During the coronavirus pandemic he’d heard the need even more urgently, with calls to keep Memorial Drive closed to cars for use as open space, and for the city’s golf course to be repurposed as well. “The reality is, we still need open space,” DePasquale said. “On the other hand, we didn’t want to handcuff the council and declare it as open space … BB&N hopes it can be open space, but we haven’t guaranteed that” after the first three years, when the school will still need its occasional use.

Other councillors seemed confident the acreage could stay at least in part open space, even if there were eventually affordable housing or even a prekindergarten sharing the 4 acres. The vote was 8-1 in favor of the deal in anticipation of an eventual public process that would decide that mix.

Some councillors criticized the staff for missing past opportunities – Toomey’s example was Fulkerson Street in East Cambridge – and urged the city to keep looking for land becoming available in even more essential areas such as Alewife, where a surge in residential construction suggested an onrushing need for a neighborhood school and neighborhood open space. But no matter playing fields’ addresses, they are used by “youth from across the city,” councillor Patty Nolan said. “We are one city.”

They seemed less concerned about the price than Toomey, especially after an explanation from Gayle Willett, director of assessment for the city: “This [has been] an exempt property,” she said, referring to BB&N’s tax status as as school. “The practice of the department has been to put the majority of our work and effort into taxable properties and review the exempt properties when we are coming up on a reevaluation. That is next year.”

A private appraisal placed the field at $20 million, Glowa noted, and Nolan said her own quick research showed the city’s friendly eminent domain offer as “very much in line with prices in that area.”