‘News of the World’: Tom Hanks returns, bringing his decency to a frontier mission 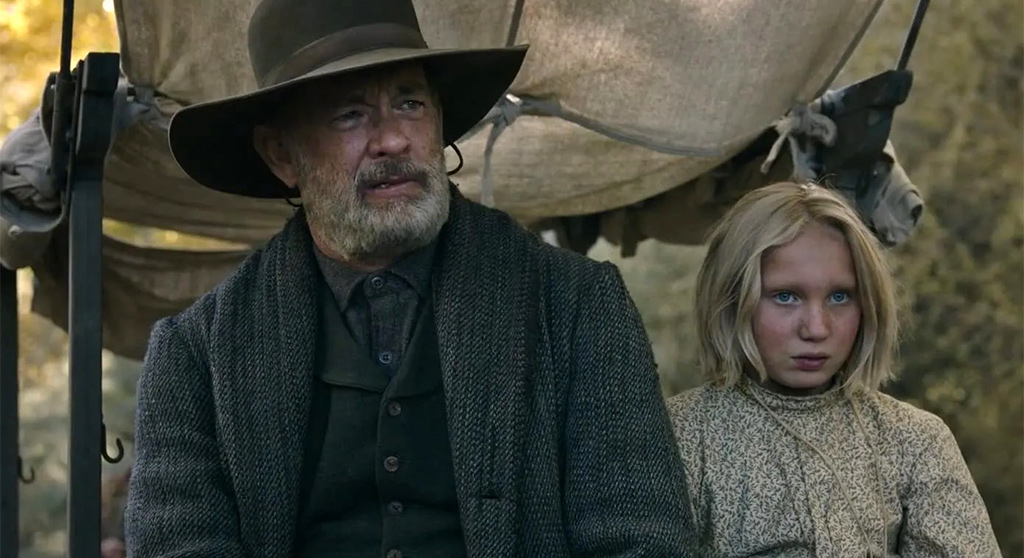 ‘News of the World’: Tom Hanks returns, bringing his decency to a frontier mission

“News of the World” re-teams Tom Hanks (“Greyhound,” “Big”) and director Paul Greengrass (“United 93” and the Jason Bourne films) after their 2013, real-life Somali pirate ordeal, “Captain Phillips.” That was a serviceable enough film. Here, in this Reconstruction-era Western, the production values and sense of place – a lawless frontier peppered with amorality and humanity – go far. Based on Paulette Jiles’s bestselling novel, Hanks plays Captain Kidd, a gentlemanly Confederate veteran who drifts through Texas reading news stories with dramatic flair to townsfolk who gather in a church, barn or paddock and pay 10 cents for his heightened oration. They’re true stories, mind you, right from print; you can think of the wandering tour as something akin to newsreel footage shown in theaters during the two great wars before there was TV.

At one juncture between towns, Kidd comes across a lynched black man with a note affixed, “Texas Says No! This is White Man’s Country” – a stark reminder of where we’ve been and sadly still not too far from. Close by, Kidd finds a young German girl named Johanna (Helena Zengel), whom he quickly learns was taken in by the Kiowa tribe when her parents were killed, raised as one of their own and, as a result, speaks more Kiowa than German or English. A passing law party tasks Kidd with returning the girl to authorities in the next town (the Kiowa, we find out, have been eradicated through land grab policy), but when those accommodations prove unsound, Kidd takes on the responsibility of shepherding Johanna to her aunt and uncle.

Part of Hank’s cinematic appeal has always been the way his “decent fella” navigates a brutal land, and it’s put on full display here where, once outside a town’s main street, the law won’t come even if they hear you calling. Johanna proves to be a lot to handle in her own right, and many along the way want to cut Kidd down so they can abduct the girl and sell her on the flesh market; there’s also the fact she’s considered native, which parks her in the same subhuman caste as a black person in the eyes of many.

To its advantage, “News of the World” isn’t so much about the plumbing of division and hate – it’s right there in nearly every frame – but the slow-budding bond between Kidd and Johanna in light of it. Hanks holds it all together with his soulful eyes, channeling the conflicted righteous goodness of Jimmy Stewart: You get a good idea who the man is behind them and what he’ll do when the chips are down. The film’s big revelation is Zengel, who demonstrates broad emotional range and nuance in a role in which a language barrier and fits of tween angst are part of the package. She handles both with aplomb.Of course, none of this happens without the sets and setting, pulled off with authenticity. To Greengrass’ credit as director and co-writer, the shootouts and trail conflicts are awkward, sudden things that often go down in unexpected and sloppy ways. It’s the kind of raw, revisionist stamp that separated Clint Eastwood’s “Unforgiven” (1992), Kevin Costner’s “Open Range” (2003) and most of Sam Peckinpah’s Western classics from the morally right black-and-white Hollywood studio staples. In that gray area where good doesn’t always prevail and the fastest gun doesn’t always win, there’s truth.