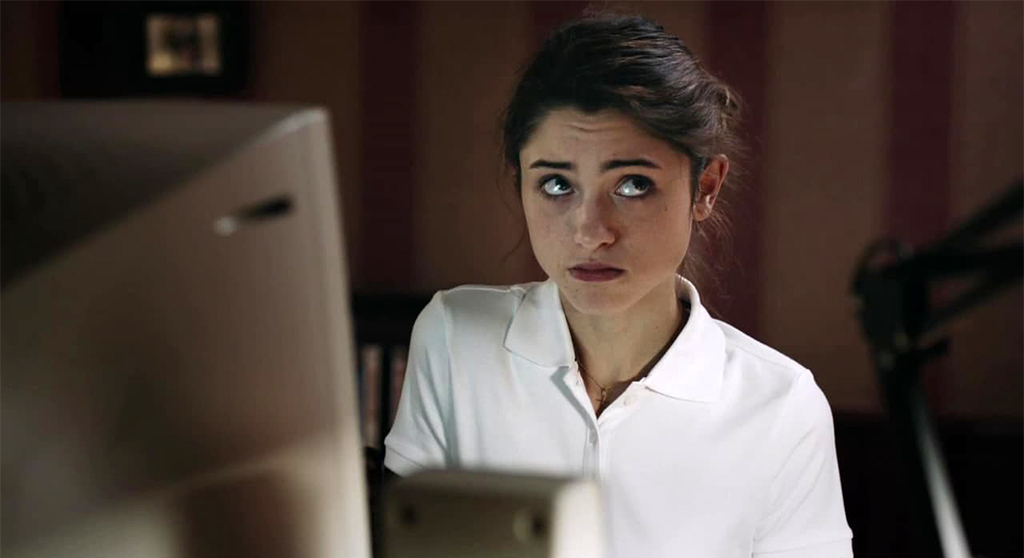 Karen Maine, writer of “Obvious Child” (2014), gets behind the lens for this tale of sexual repression and liberation at a religious camp for high schoolers where hypocrisy is high priest. We hang on Alice (Natalia Dyer, from “Stranger Things”), a wide-eyed ingenue who becomes the subject of a nasty rumor (check out the urban dictionary definition of “tossed salad”) and comes under the scrutiny of mean girls, staffers and the father running the retreat. The pious ain’t so pious, it turns out. The film is something of a throwback, with a “Meatballs” (1979) feel to it. Not all the jokes land fully, but Dyer, with her expressive face, holds it all together, becoming the camera’s focal point as Alice learns that certain objects – such as a vibrating cellphone and a mop handle – can provide physical happiness.

Tom Hanks gets back in the captain’s seat (“Sully” and “Captain Phillips” the other two) for this WWII burner about a destroyer attached to a fleet of supply ships crossing the Atlantic (the “Black Pit”) and hunted by German U-boats. It’s a tightly paced game of cat and mouse that erupts into some spectacular naval battles, intensified by the psychological effect of late night radio calls by the Germans taunting imminent death and the amazing human machine of the vast crew that executes as one after Hanks barks an order. Hanks, righteous and effusive, also penned the script from C.S. Forester’s novel, “The Good Shepherd.”

The other great Russian film (alongside Sergei Eisenstein’s 1925 classic, “Battleship Potemkin”), but not as widely known or recognized. Director Andrei Tarkovsky made just a scant few films (“Stalker,” “The Sacrifice” and “Solaris” among them, and all pretty great). This, an early effort, revolves around the titular 15th century monk, an iconographer who travels the landscape of feudal Europe where civil war and Tatar invasions are a regular thing. The sets, staging and scope astound. Besides the great battle sequences, there’s a pagan orgy in the middle of the film’s eighth chapter. The film clocks in at more than three hours, but feels only half as long with themes of self, religion, art and freedom perforating each episode.

A later effort from Tarkovsky about a post-apocalyptic world in a fictitious country where people eke out a meager existence. On the outskirts there are “zones” guarded by the military; “stalkers” are those who run illicit excursions or scavenger missions into them. Based loosely on the sci-fi novel “Roadside Picnic,” Tarkovsky’s adaptation follows a stalker (Aleksandr Kaydanovskiy) leading a writer (Anatoliy Solonitsyn) and a professor (Nikolay Grinko) into one such zone on a quest to find “the room” where one’s desires and dreams are realized. The film does have some neat action sequences – getting past the tanks and guns and into the zone – but ultimately becomes more of an existential exercise in hope and faith. The alternating use of matted and color palettes and frame within frame, shots by Tarkovsky and his trio of cinematographers, is an aesthetic wonderment in its own right.

A mute alien from another planet (Joe Morton) who has the appearance of a black man, but can read your mind and fix anything, is stalked through the streets of Harlem by two celestial bounty hunters (director John Sayles and David Strathairn). The themes of race, racism and slavery (Morton is an escaped slave) register even more pointedly and barbed in the here and now. Sayles (“Eight Men Out,” “Matewan” and “City of Hope”) has always had his finger on social issues; this one, something of a B-ish sci-fi dramadey, provides laughs as it provokes.

Mumblegore maven Ti West (a “V/H/S” segment, and “The Sacrament”) tells something of a ghost tale in the Yankee Pedlar Inn in Torrington, Connecticut – a place I’ve spent a few nights. The film centers on two innkeepers (Pat Healy and Sara Paxton) on the eve of inn’s shuttering (as I read it, it is still closed in real life) when a celebrity novelist and psychic (Kelly McGillis, calling to mind Kathy Bates in “Misery”) checks in. The lore of a death at the hotel bubbles up and there’s something in the basement that begs exploring. The cast, especially Paxton, is excellent, but the film doesn’t quite know how to transition from character study to creepshow.

Mumblecore does mumblegore. This lean ($1 million budget) home invasion thriller directed by Adam Wingard and written by Simon Barrett moves in unexpected turns. Let’s start with the fact that some of the yuppies in at a country manse are mumblecinema staples (Joe Swanberg, Ti West and Larry Fessenden); then there’s the sociopolitical twist of the 99 percent consuming the 1 percent, which kicks off unceremoniously when one of the guests catches a crossbow bolt in the head out of nowhere. The masked invaders (in tiger, lamb and fox masks) are pretty efficient in their mission, but one of the guests (Sharni Vinson) has a background in dealing with such lethal shenanigans. The film checks all the requisite boxes and moves in a few new directions to boot.

Roman Polanski’s home invasion in a seaside castle at the end of a lane is eerie in how it predates the Tate-LaBianca murders by two-plus years. Two hoods on the run (the always amazing Donald Pleasence and Lionel Stander, who played Max on “Hart to Hart”) insert themselves into the home of a young woman (Françoise Dorléac, “The Young Girls of Rochefort”) and her feeble older husband (Jack MacGowran). Given it’s Polanski, the film’s loaded with nuance and dark comedy as allegiances and agendas shift. The stark, yet gorgeous cinematography is provided by Gilbert Taylor (“Star Wars” and Polanski’s other dark drama, made the year before, “Repulsion”) and also features Jaqueline Bisset is a small role.

Wes Craven’s grim, lo-fi thriller is a heart-racing experience the first time you see it. Based on true events, the film begins with two suburban girls kidnapped and brutalized by a gang of escaped convicts when they go into the city for a rock concert. The gang then goes coincidentally to one of the girl’s homes parading as traveling salesmen and realize from pictures on the walls whose house it is. The parents likewise have a good idea who their houseguests might be, and then it’s game on. The film has a near documentary feel to it that makes the prolonged acts of brutality that much more vivid and horrifying. Not for all, but yet a classic.