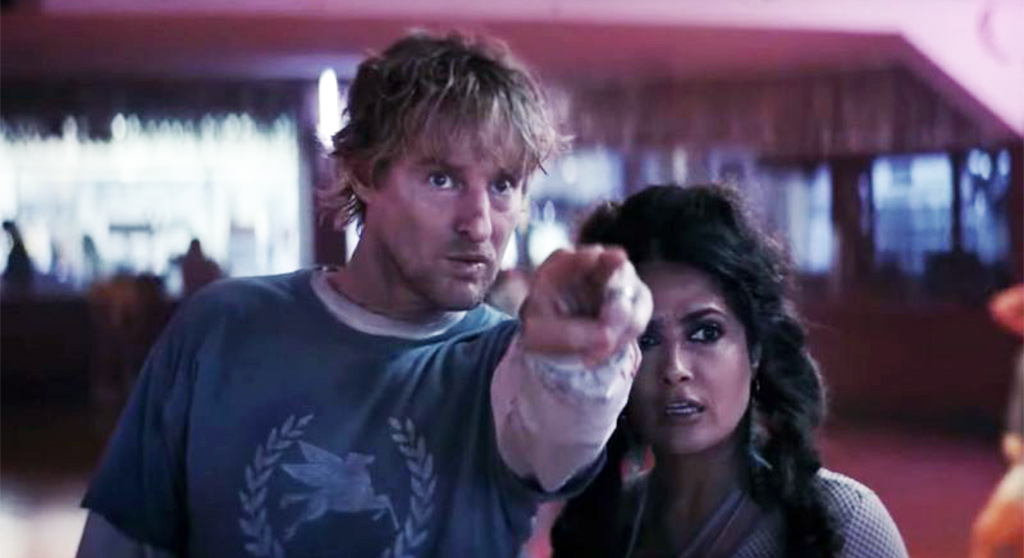 Mike Cahill, the somber indie voice behind “Another Earth” (2011) where alternate realities coincided, overlapped and collided, retools the concept here with a bigger palette and broader ambition. It grips and grabs as his former film did, but the result’s not nearly as compelling. “Bliss” begins something like a Mike Judge offering (“Idiocracy,” “Office Space”) with an IT office cog gloriously named Greg (Owen Wilson) who doodles sketches of a fetching woman on some exotic veranda. The place Greg works at, Technical Difficulties, is a pressure cooker, bleeding business to cheaper, India-based call centers; needless to say, Greg’s artistic malaise doesn’t bode well with his coworkers. In short order he’s called in and terminated; but before the escorted-out-of-the-office walk of shame takes place, Greg accidentally kills his former boss, decides to cover it up (in a great tracking shot) and heads to the bar next door to steel his nerves.

It’s a grandly dark and goofy (mostly because of Wilson’s shaggy dog persona) waltz in. You’re hooked; Greg’s either liberated from the yoke of unappreciative capitalism or en route to a 10-to-life term for manslaughter. But where Cahill goes from there becomes muddled and disconcerting. At Plato’s Dive (said watering hole ) Greg is called out by a woman (Salma Hayek) sitting across the dark divide in a booth. “You’re real,” she exclaims, pointing a finger at him like she has him snared in a tractor beam. Curiosity piqued, Greg takes a seat, tunes in and over the course of a soul-nourishing scotch, the thick-haired maven (Isabel, as the film has it), operating with shamanistic authority, pops a few magic crystals and makes Greg’s office worries disappear. It’s here that we learn Greg is newly divorced, his daughter is graduating college and he’s been living in a motel somewhere around the corner. It also looks like he hasn’t washed his hair in weeks. (Some people might find the pairing of Hayek and Wilson a curious one. I did, but the Mutt and Jeff contrast abates early.)

The film bounces us to Isabel’s digs, something of a hobo encampment within the confines of the concrete channel that is the L.A. River (“I’m not homeless,” she says. “I’m living off the grid”) and pulling back the veil, the two are at a grand Riviera estate with Bill Nye in a tuxedo addressing Isabel as a doctor and professor. The two are also in grand attire, with Greg’s hair washed and blown out, and every now and then passersby are seen as glitchy computer generated images – FGPs, or Fake Generated Persons, as Isabel tells us. What’s going on? Have we jumped down some weird, sci-fi rabbit hole? Are these homeless delusions à la “The Fisher King” (1991), or some type of a psych ward or science experiment gone off the rails like “12 Monkeys” (1995)? Then there’s all the “Matrix”-esque crystals Isabel keeps popping.

The device that rooted the viewer in that stasis-dreaming-man-as-a-battery trilogy helmed by the Wachowskis and those Terry Gilliam films (and “Vanilla Sky” as well) was the reliable point of view from their unreliable protagonists: We saw only what they saw. Here Cahill has us tight in with Greg, and halfway through the film offers side vignettes of his children (interestingly, looking nothing like Greg – something that’s never really explained and doesn’t really need to be) and other POVs that jar and poke holes in the tenuous bubble he’s filled with techno/other-world mumbo-jumbo.

One of the more interesting spins is that Isabel and Greg, when jacked on crystals, can use their fingers to throw the fake people around. “You’re a telekinetic warrior,” Isabel says of Greg after he crushes a van full of harassing hoods like a tin can. But it’s somewhat unsettling to see him take a walker out from under an old woman just because of a scowling glare directed at Isabel. What begins as a social justice payback when Isabel takes out the legs of a creep copping butt grabs of yoga-panted women at a skating rink becomes something of the bar bloodlust scene Hayek was part of in “From Dusk Till Dawn” (1995). In that Quentin Tarantino-Robert Rodriguez vampire creation, it was comical and to the point; here, even given the impunity of consequence, it’s not dark or even cruel like a boy blowing up frogs with firecrackers – it just undermines the characters and the tone of the film.