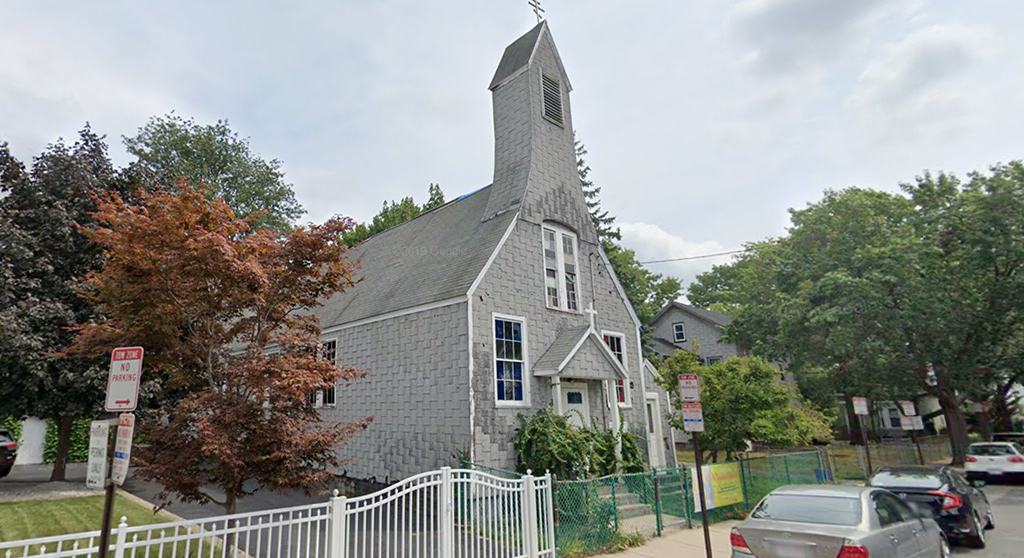 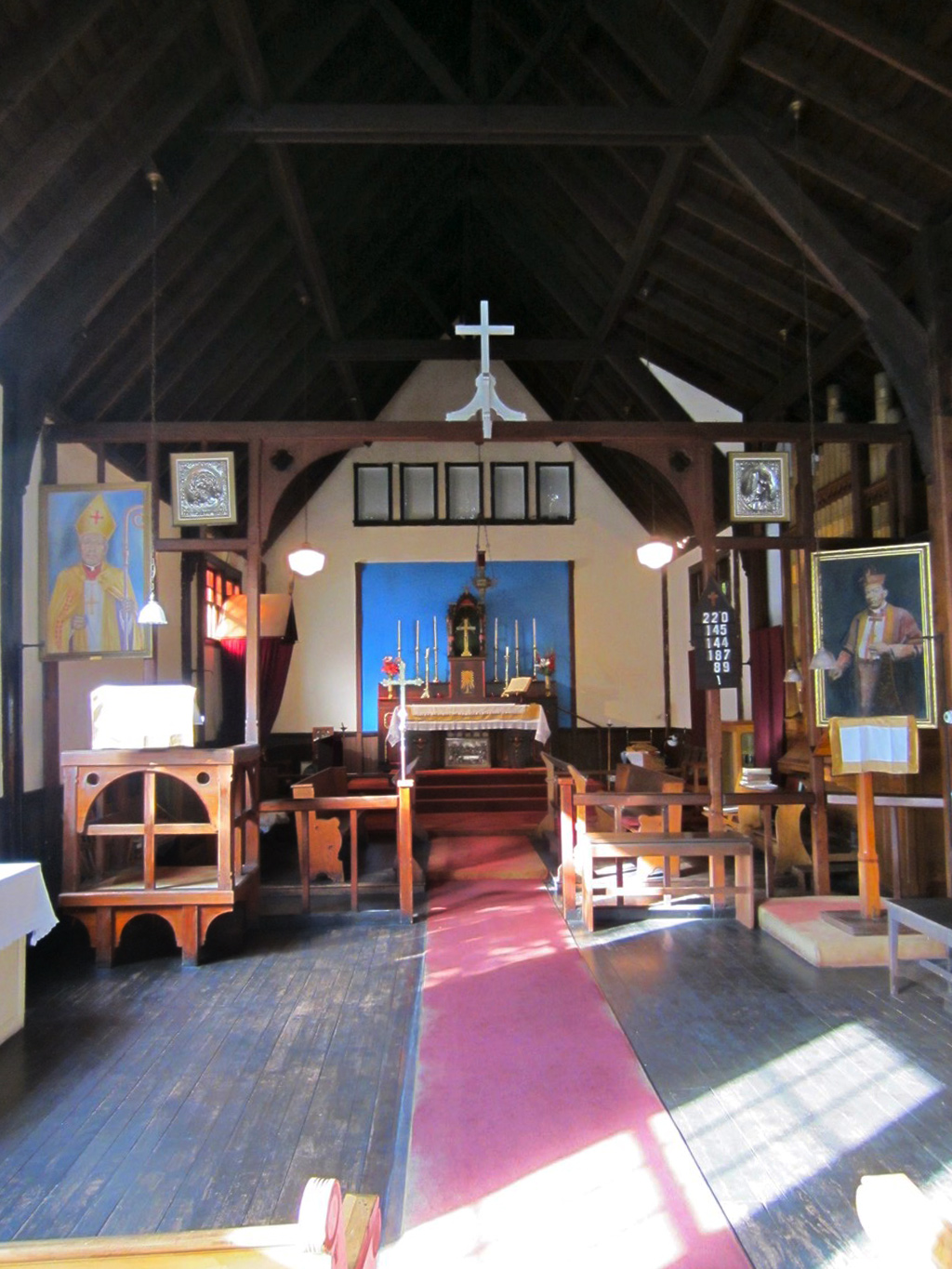 Restoration work at St. Augustine’s, a Cambridgeport church dating back to 1886, could see a boost from the Historical Commission’s unanimous vote Feb. 4 to recommend landmark status and likely approval Feb. 22 by the City Council.

“Now we march on and continue the great work that we have begun,” said the Rev. Kit Eccles, St. Augustine’s minister, responding to the commission vote.

Next for the 137 Allston St. church is removal of weathered asphalt shingles from 1949 and a return to the look of the original red cedar shingles – some still peeking through – that the commission called “the main priority for restoring the historic character of the structure.” Restoring an original side entrance is also on the to-do list. And if commission staff had its wish? Making the bell visible again in the church’s bellcote. 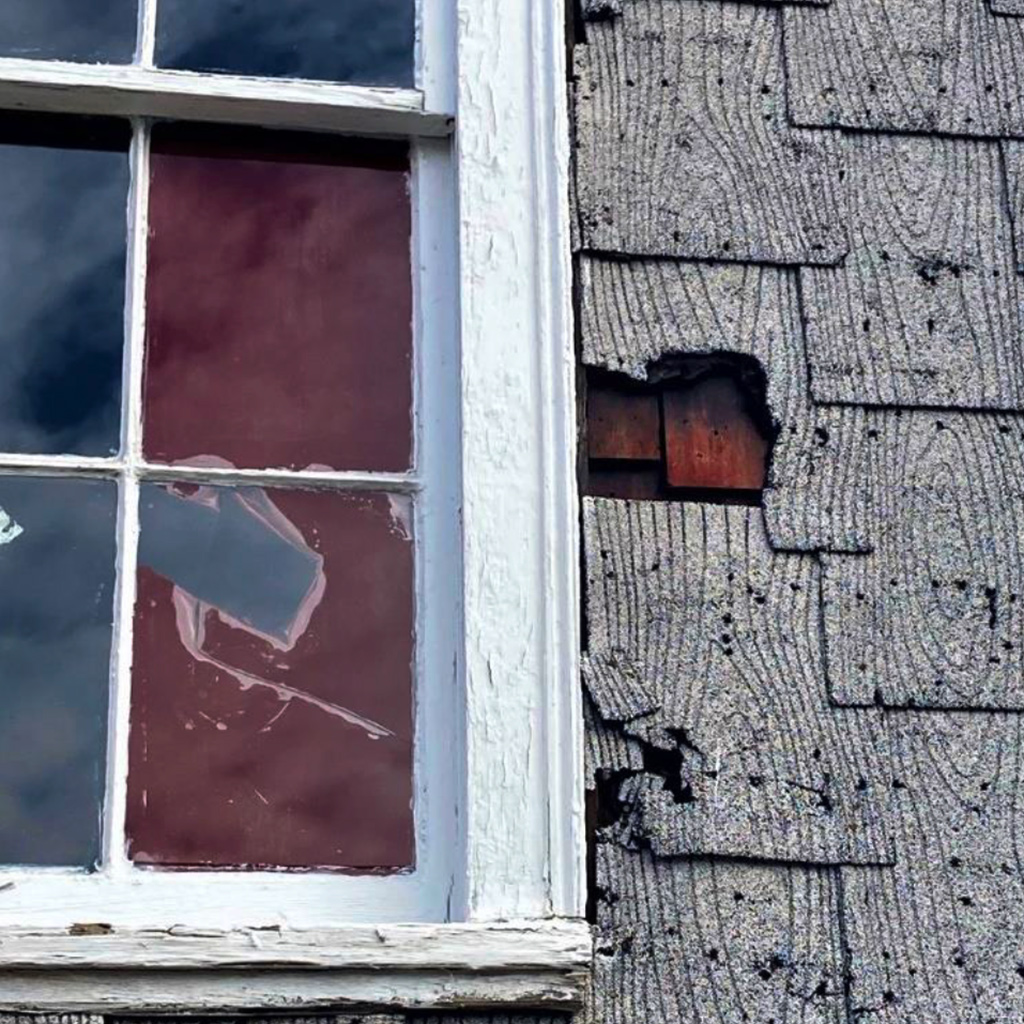 Some of the original red cedar shingles peek through asphalt shingles laid on top in 1949. (Photo: Cambridge Historical Commission)

St. Augustine’s African Orthodox Church has “important associations with the broad architectural, cultural and social history of the city,” commission staff said. “The immediate issue confronting the property is the condition of the building itself.”

From alarm to action

The Cambridgeport Neighborhood Association, whose officers said they were “alarmed” by St. Augustine’s deteriorating condition, began raising community awareness and funds in fall 2018, finding a partner in the commission, which awarded two matching-fund grants totaling $150,000 to support restoration of the church exterior. Nearly 270 donors joined in to contribute about $80,000 to help the church make the match, and the National Trust for Historic Preservation awarded two grants worth $17,500, said Cathie Zusy, treasurer of the association.

Since then, the nonprofit Black History in Action for Cambridgeport – co-founded in 2019 by Kris Manjapra, a Tufts historian and Cambridgeport resident – has joined the effort, setting up headquarters in the church to promote programs focused on sharing Black culture, arts, history and education, as well as sustaining and revitalize St. Augustine’s as a neighborhood center for assembly, empowerment and outreach. (Cambridge Arts has awarded BHAC a $5,000 grant from its Art for Racial Justice program to pay for a podcast series, Zusy said Thursday. The series begins Saturday with a conversation with Ulric Johnson, founder of Teens Advocating a Global Vision.)

A petition from St. Augustine’s and community supporters inspired the the Historical Commission’s yearlong landmark designation study that culminated in the Feb. 4 vote. Executive director Charlie Sullivan presented a final report and public testimony followed in support of landmarking from speakers including former mayors E. Denise Simmons and Henrietta Davis, Eccles and Manjapra, as well as Cambridgeport Neighborhood Association board members Gabe Cira and Zusy.

St. Augustine’s played a role in the work of Marcus Garvey, the black nationalism and Pan-Africanism movement leader who helped inspire the Nation of Islam and Rastafarianism.

The structure started existence in 1886 as an Episcopal mission – and a popular one, built as an expansion of a church in Central Square and itself physically expanded after just two years to double its capacity and seat 400 people. But the congregation was neglected, and by 1927 the building was sold. First it went for furniture storage; but in 1931 it came to George Alexander McGuire, an Antiguan who’d established his African Orthodox Church in 1921 after breaking with the Episcopal Church over its racism and discrimination against black clergy. McGuire joined forces with Garvey and ran the African Orthodox religion as a wing of Garvey’s black political movement. This church was given the designation of “pro-cathedral,” meaning it was the home base of the bishop and of the religion himself.

McGuire broke from Garvey in 1924, but that didn’t stop the church’s growth. When McGuire died in 1934, “the African Orthodox Church could claim approximately 30,000 members in 30 congregations in the United States, the West Indies, South America and Africa,” it was noted in the commission report.

In addition to the re-siding and relocation of an entrance, the church is due for window repair and insulation, as well as an upgrade in accessibility for people with disabilities, Zusy said.

St. Augustine’s restoration gets $110,000 grant from Mass Cultural Council; it must be matched