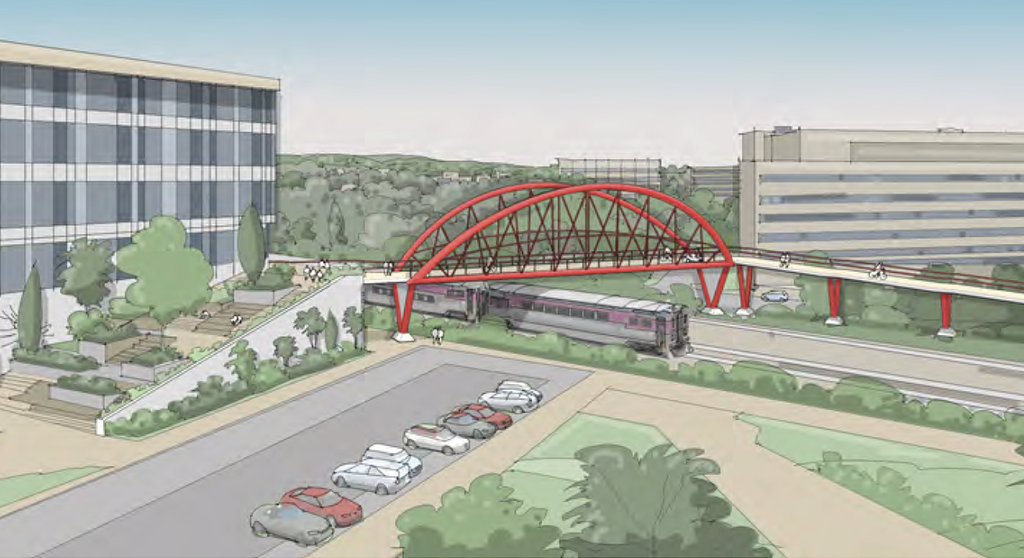 Developer Cabot, Cabot & Forbes has some work to do in the next two weeks to win city councillors over to a plan to remake its own 16 acres in the Cambridge Highlands, though it was late changes to a major project that also had some councillors annoyed Monday – especially since the zoning would affect some 26 acres total.

The project, known as the Alewife Quadrangle Northwest Overlay District, was moved formally to a final consideration March 15 on a 6-3 vote, with vice mayor Alanna Mallon and councillors Tim Toomey and Quinton Zondervan opposed. But others called moving it onward to a second reading necessary, since the petition is due to expire the next day.

“They can refile. But they are clear that they won’t, that they have refiled enough,” said councillor Marc McGovern, who has helped shepherd the proposal as co-chair of the council’s Ordinance Committee.

That would leave the company with the option of simply turning its land into four to six lab and office buildings, instead of including 490 units of housing, additional open space and ground-floor retail uses such as a gym and brewery that would help turn the area into a real neighborhood, McGovern said. In addition, the company would build and help maintain a long-wanted bridge over railroad tracks – one of a pair of bridges for pedestrians and cyclists that could include shuttles to public transportation.

McGovern’s co-chair, Dennis Carlone, said he was pleasantly surprised by what he found in Monday’s packet. “The more we looked at this information, we discovered a few things that we didn’t know – 48 percent of this proposal is for housing. We were both very surprised that it was as high as that,” Carlone said. (A chart referred to by McGovern showed 40 percent.) “And the parking has been lowered significantly, and so the garage is smaller.” Jay Doherty, chief executive of Cabot, Cabot & Forbes, told councillors last month that the central garage would go to around 500 spaces from 700.

Yet it was exactly the surprise expressed by the committee co-chairs who’d seen the proposal through three hearings, the most recent being Feb. 16, that drew concern from other councillors. 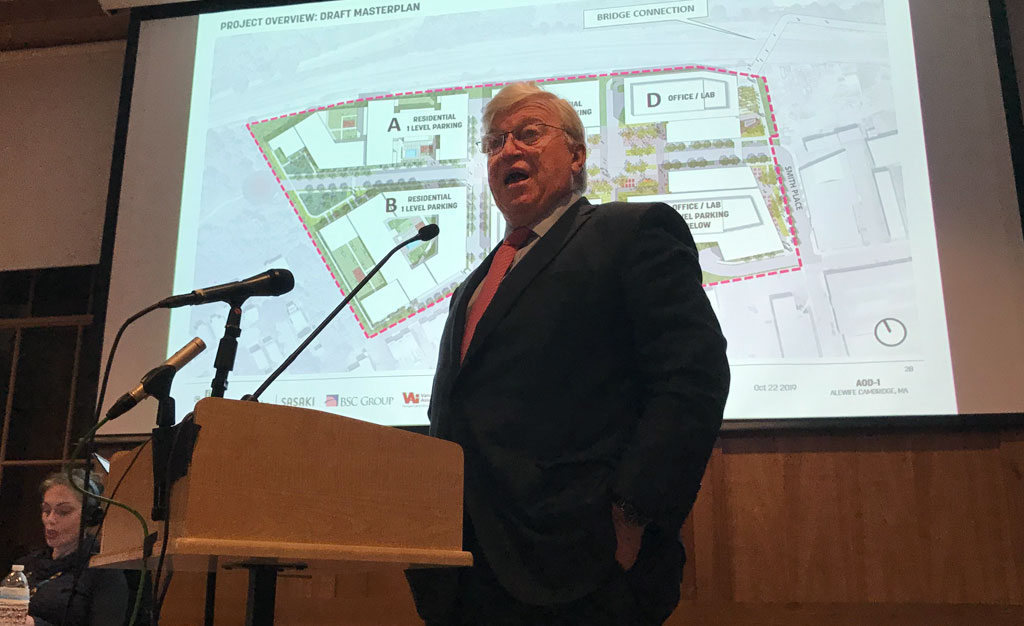 Though the proposal was first heard in October 2019, there have been numerous tweaks and factors introduced, with the company adding another neighboring 4.4 acres five months ago with the purchase of 67 Smith Place. The zoning proposal is in its fourth iteration, having been first identified as the Navia petition (when a Planning Board member found it “not even half-baked”), then the Hartvigsen petition and then the Srinivasau petition, which was placed on file last year and refiled in October. A weary-sounding McGovern said he didn’t know why Cabot, Cabot & Forbes had gone the route it has. “I thought that was a mistake, particularly when you have a company [where] there already were some trust issues with them based on some past behavior,” he said.

Neighbors remained concerned about building heights that, including rooftop mechanicals, could go over 110 feet with the company’s zoning rewards from the added housing, retail and bridge construction, according to remarks during public comment.

Changes to a financial analysis of the project that treated its ground-floor retail spaces as a loss – elsewhere it was described as a $32 million net benefit – contributed to Mallon feeling “a little bit skeptical.”

“There’s a significant difference between what they’re getting for an upzoning, and what the City of Cambridge is getting back [as community benefits],” Mallon said. “Just in some of the conversation we’ve had here tonight … updates are coming later this week, many items are forthcoming, councillor Carlone said ‘the more we looked at this, the more we discovered things we didn’t know’ … there are far too many unknowns, far too many conversations that need to be had.”

Several councillors noted that the developer hadn’t provided an updated letter of commitment, which left unstated everything from a guarantee to have union labor build the project – even though union reps were already calling to lobby for it, Mallon said – to the status and size of the promised bridge. “The fact that the developer has not put anything forward is a red flag for me,” Mallon said. “I feel like I have a gun to my head on a significant upzoning for 26 acres in a new area of Cambridge that we really need to be looking at in a much more holistic way, and not be doing this at the last minute.”

Councillor Patty Nolan called it a “scramble,”and Quinton Zondervan was struck that the council was still debating basic aspects of the plan. Jivan Sobrinho-Wheeler said he was unhappy it had gotten out of committee Feb. 16 on a narrow, 5-4 vote with the opposition of Sobrinho-Wheeler, Mallon, Nolan and Zondervan. Tim Toomey agreed there were “too many unanswered questions” and hoped the petition would be placed on file for the developer to start the process anew – for a fifth version – “if that is the wish of the developer.”

Toomey did not expect to vote for the plan March 15. “In the next two weeks to try to devote as much time and attention to trying to get this resolved, I just don’t see how that is humanly possible considering the time constraints and the level of unanswered questions,” he said.

“These things always do come up to the last minute,” McGovern said. “And that’s in part because we’re constantly negotiating and pushing things. So we end up in this position an awful lot.” 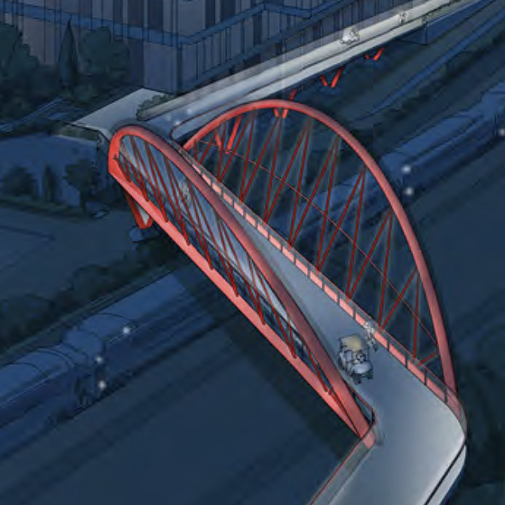 Many of the questions Monday were about the developer’s bridge, details of which remained elusive despite a Feb. 16 presentation from builder Miguel Rosales, of Rosales Partners, and an assurance from Doherty that his company would pay for design and construction with $9 million placed in escrow as details were worked out with the city, Conservation Commission and Massachusetts Bay Transit Authority. (The financial analysis put the company’s total commitment at $17 million.)

It would be partnered with a $25 million bridge built by the city to connect to a proposed Alewife commuter rail station that Susanne Rasmussen, the city’s director of environmental and transportation planning, said was supported by state transportation officials during a 2015 study; any bridge getting residents over the tracks, whether there’s a commuter rail station or not, has been an object of desire for the area since at least 1979. The wider the bridge and its capacity to accommodate an electric shuttle as well as bikes and pedestrians, the higher the cost, planners said. Rosales is identified as the designer for both bridges. 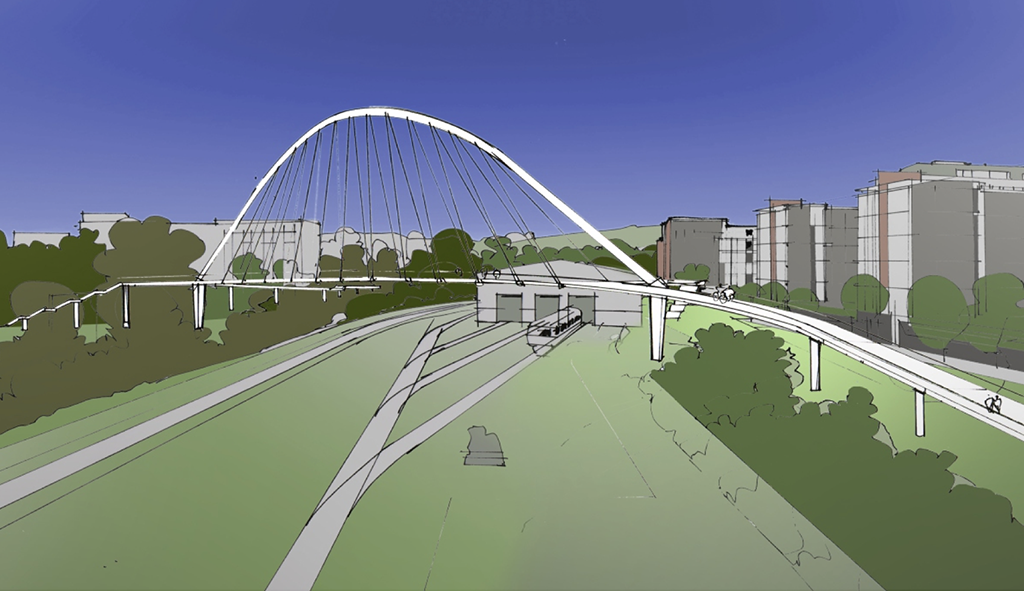 More information came from a meeting last week between city staff, the developer and Rosales. “They were actually further along than what we had understood them to be,” said Department of Public Works city engineer Kathy Watkins, describing the conversation to councillors. And city staff has also come to understand Cabot, Cabot & Forbes’ expectations for a lower price tag.

“One of the big things that we’ve all been talking about is how come the two bridges have such different costs. Their bridge is actually a foot wider than the bridge that the city has been working on,” allowing for electric shuttle vehicles, Watkins said. “The issue really is about the length of the bridge and the length of the ramps: Their bridge is much shorter based on the location [over a] narrow section of the tracks.” The city’s bridge is longer because it’s “much more of a diagonal” across the tracks to align with a future commuter rail station.

Some of the discussion was also to “make sure that this bridge happens, and really tie it to building permits and certificates of occupancy” and answer what will happen if the developer can’t get permits, Watkins said. “Those are some of the things that they’re working to put into the letter of commitment and to really finalize those details.”