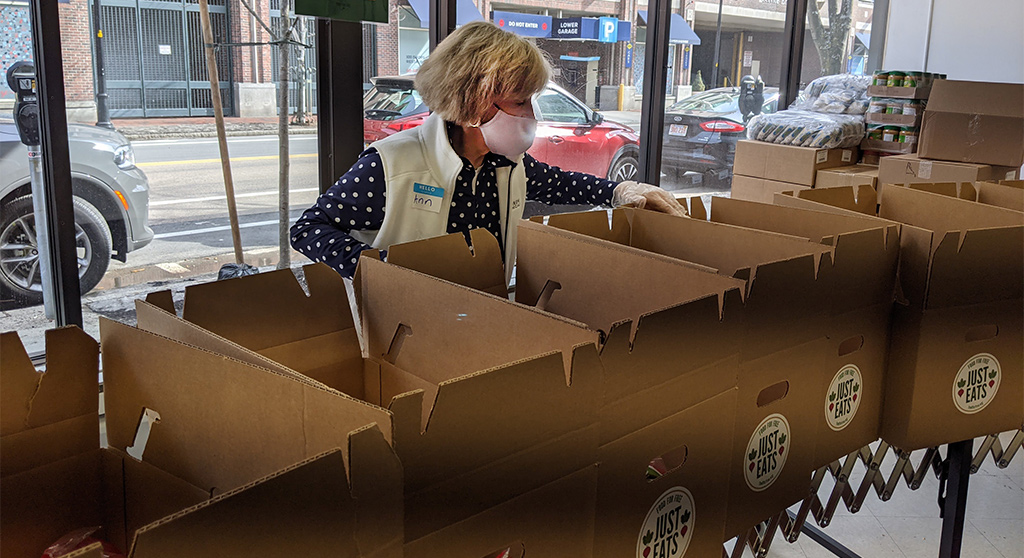 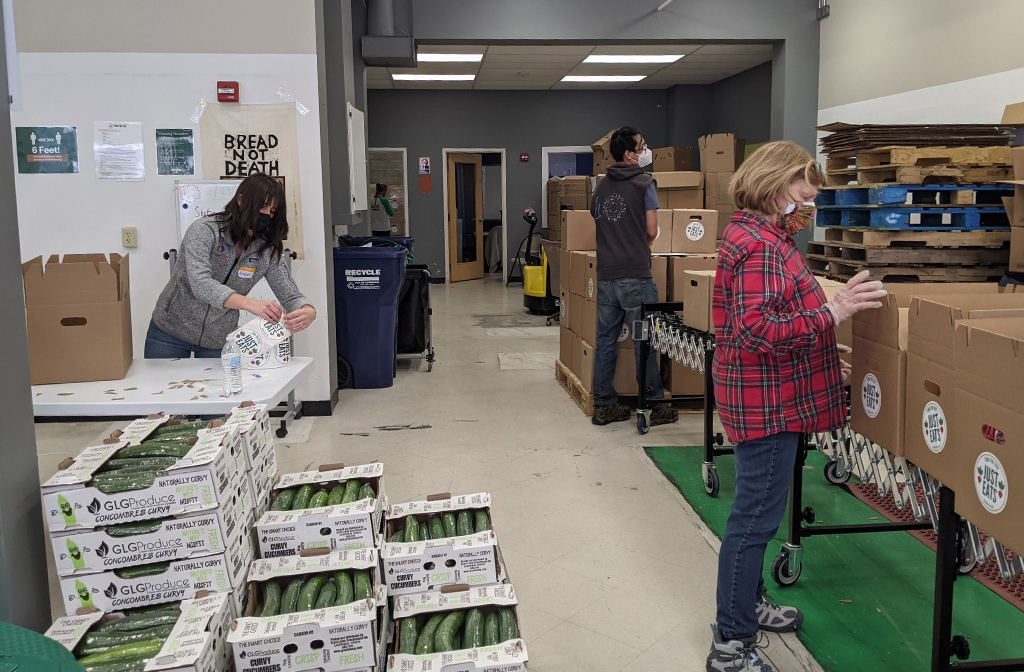 Food for Free workers and volunteers put together some of the first Just Eats Grocery Boxes on Feb. 24 in East Cambrdge. (Photo: Life Science Cares)

The nonprofit Food For Free began assembling Just Eats Grocery Boxes on Feb. 24 at its new distribution center on First Street in East Cambridge, producing 3,000 family boxes of food a week for distribution through its network of community partners in Cambridge, Somerville, Boston and Chelsea, including food pantries, Cambridge Housing Authority sites, other low-income housing sites and schools.

The $170,000 starter funding for the project came from Life Science Cares Boston, described as the life science industry’s platform for giving back ($50,000); the Biogen Foundation, the philanthropic arm of Cambridge-based neuroscience pioneer Biogen ($100,000); and Alexandria Real Estate Equities, reputed to be the largest owner, operator and developer of collaborative life science campuses in Greater Boston ($20,000).

From May to October, Food For Free distributed boxes of fresh produce as part of the federal Farmers to Families Food Box Program, but access to that federal funding shrank in the fall. Food For Free said it intends to fill the gap for hungry families with fresh food items such as potatoes, onions, carrots, apples and oranges, as well as staples including rice and dried beans. Some food will be bought; some will arrive through nonprofit partners such as the Greater Boston Food Bank and Boston Area Gleaners.

Food For Free plans to use the money from its corporate partners to produce 1,000 boxes weekly in its new East Cambridge food packing center and contract another 2,000 through the Boston Area Gleaners group, organizers said.

It’s not known how many Just Eats boxes will be distributed, or for how long, said Sasha Purpura, Food For Free’s executive director.

“The trajectory of the continuing pandemic is unpredictable. What we do know is that hunger is on the rise. We are fielding requests every week from local community groups who need food, and we know that the need for food is still growing,” Purpura said. “We committed to operating the program at least until June and remain open to the possibility of running it longer if the need continues.”

Running the program through the end of June would provide 63,000 of the 25-pound boxes of food – about 1.5 million pounds of food, or 1.3 million meals, Purpura said.

Others were encouraged to “step up with funding to meet these urgent and critical needs … Children cannot learn, employees cannot work, the sick cannot heal without food to fuel them. The Just Eats boxes are a vital tool to ensure families and children have access to fresh, healthy food,” Life Science Cares Boston executive director Sarah MacDonald said.

Kate Dawson, head of Biogen’s therapeutics development unit and chair of the Biogen Foundation, said its contribution was just a continuation of work with Food For Free begun in 2019, when Biogen provided space in its headquarters for the nonprofit’s first long-term kitchen.