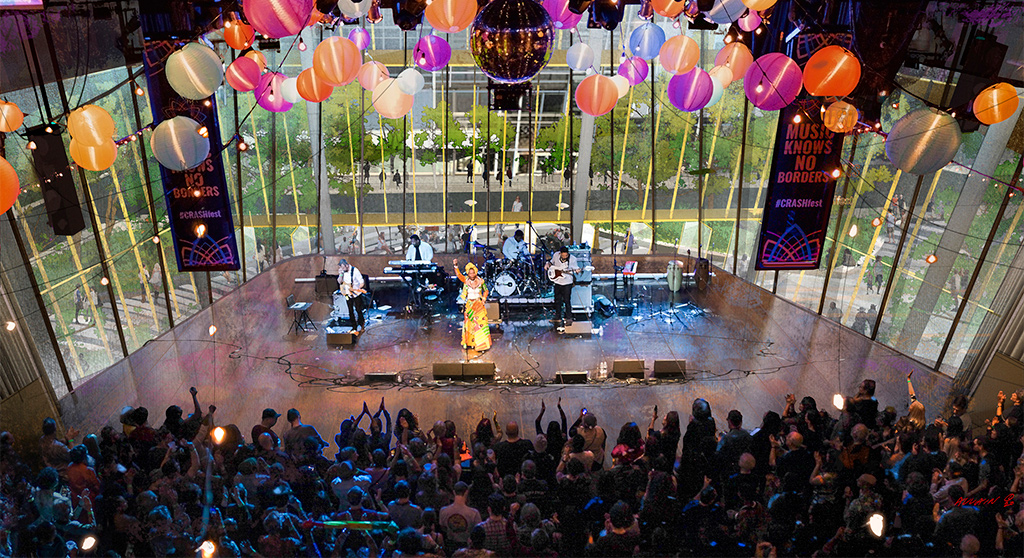 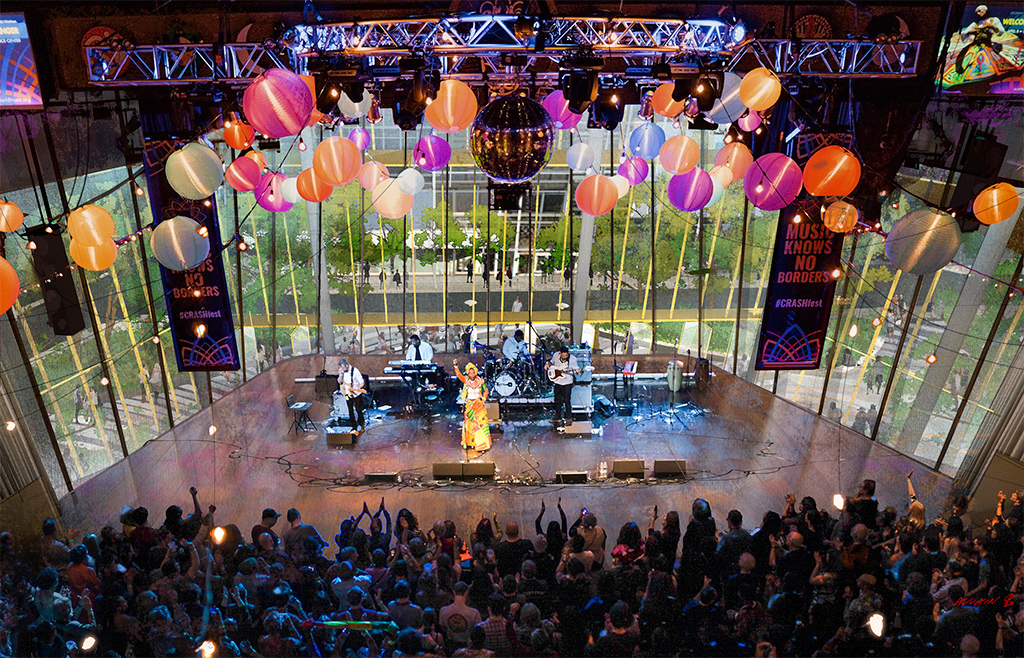 A rendering shows what’s imagined for the main stage at 585 Third St. when the building opens in 2025. (Image: BioMed Realty)

An independent nonprofit called 585 Arts has been formed by BioMed Realty and Cambridge-based Global Arts Live to run the creative side of BioMed’s property in Kendall Square, from its 10-acre Canal District to the 16-story lab building it expects to open in 2025. That building is expected to include 30,000 square feet of indoor and outdoor public space with a theater, rehearsal studio and a lobby garden with its own small performance area.

There’s no name yet for the theater, which is imagined as floating over an atrium at 585 Third St. with glass on three sides and room for 300 to 350 seated customers, said BioMed and Global Arts Live representatives last week.

Global Arts Live, which is focused on international music, contemporary dance and jazz, is expected to raise operating funds for the new 585 Arts entity and become an anchor tenant in the building when it opens, then host at least 100 nights of programming a year – leaving the remainder for outside artists and cultural organizations to rent. In the first year, 28 nights will be available at zero cost, rising to 45 nights by year five, said Maure Aronson, executive director of Global Arts Live. There will be different rate structures for nonprofit and for-profit renters.

“I would like to see that most of those nights go to individual artists, and not so much cultural organizations,” Aronson said in a Monday interview. Additionally, 585 Arts said it expects to focus on attracting artists and audiences of color, “tapping into the vibrant neighborhoods that surround Kendall Square,” in part by listening to the community creative arts advisers it refers to as the Arts Influencer Circle.

Affordable, but limited in scope

To benefit all kinds of patrons as well, “we’re going to make the very, very best effort to make this affordable. It’s very important that it be affordable,” Aronson said.

“It’s a place that we hope will be accessible to all of the performing arts in Cambridge and in the Greater Boston region,” he said.

But there are some limits on what people can expect to see – or perform – in the spaces programmed by 585 Arts.

“In the 30 years that we’ve been programming, one of the things that we do very successfully is we put the right artists into the right space. That means your audience is going to have the most enjoyable experience,” Aronson said.

Though the full potential of the garden space is described as still under discussion, it might host such things as spoken-word performances, smaller dance companies and mini versions or bite-size previews of what’s to come upstairs – in the words of Sal Zinno, BioMed Realty’s vice president of development, “performances that don’t require a lot of infrastructure like the full-blown theater we’ll have upstairs.”

That theater, Aronson said, is “being built to accommodate a dance performance – and once you build a stage that can accommodate a dance performance, practically anything can perform on that. Because dance is the most technically demanding.” Still, as shown in a rendering and described by Aronson, it seems to be a space focused on music and dance: There’s no backstage or wings, nothing underneath that would allow for trap doors and contribute to clever theatrical staging and “no fly space,” he said, referring to the systems that raise and lower curtains, lights, scenery, stage effects and actors. (A rendering shows a light bar overhead.)

“Have you ever been to the ICA theater? It’s very similar to that in size, usage and design,” Aronson said, referring to jewel box theater looking over the water of the Boston Main Channel at Boston’s Institute of Contemporary Art. “This is not going to be a theater where you would present a fully produced opera production.”

And though there will be music, “it’s not a rock club,” he said. “There will certainly be music in there, because we do put music into theaters. But … for a sit-down music group, for jazz, for a group that wants to do a an acoustic set instead of a electric set. That would make this the appropriate venue.”

It’s expected that there will concessions available to theatergoers, but no hot foods – and whether they’re provided by local vendors was “TBD,” Aronson said. Zinno added that incorporating “some more significant offerings along the lines of food service” was discussed but rejected in favor of inspiring more business at nearby restaurants.

Aronson, whom Zinno said helped BioMed determine the size and capabilities of the stage, called the needs for creative space “dire” in Cambridge and Greater Boston. “This is what I hope will be the first significant step in addressing the many cultural space needs of the area,” he said.