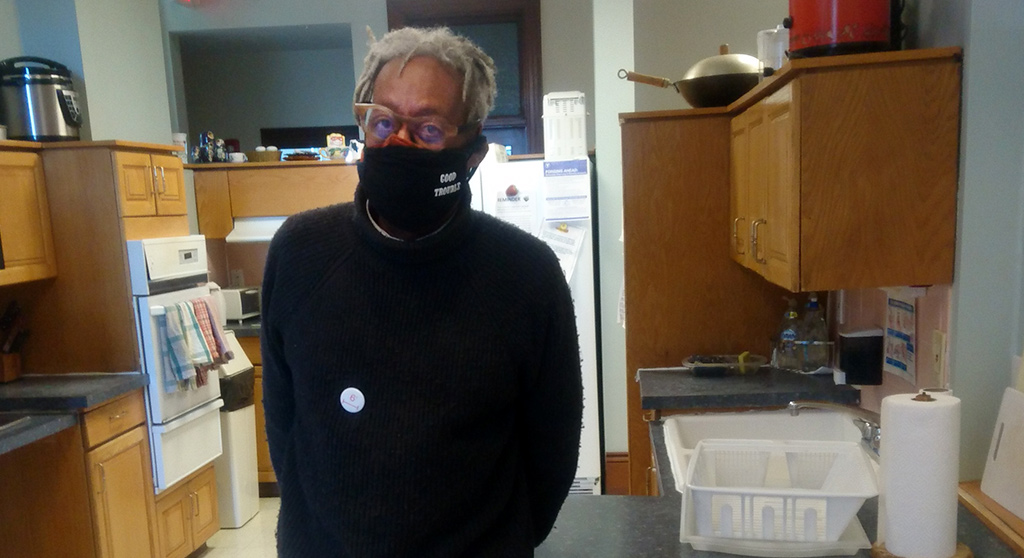 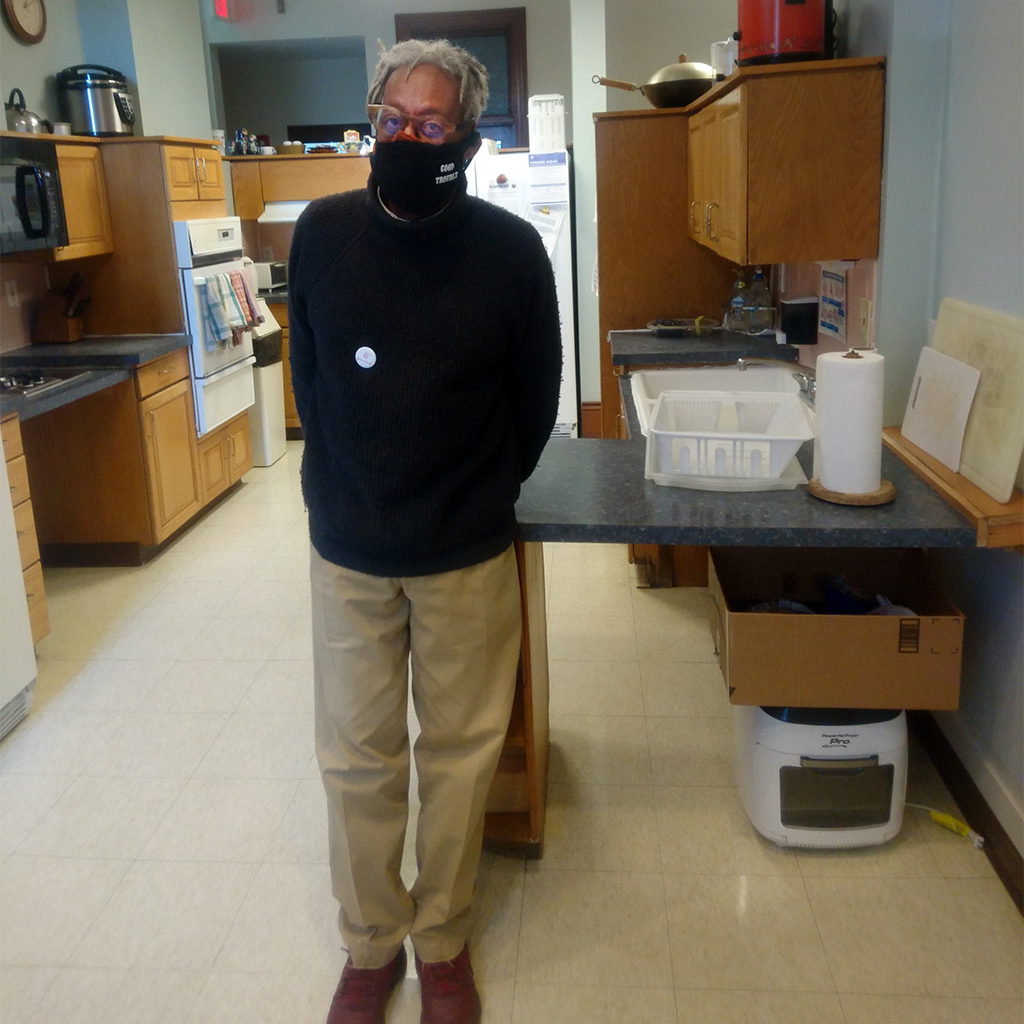 Jeffery Mcnary alerted public officials in January that help was needed at his home, the 37-unit 116 Norfolk St. (Photo: Reinert)

There was trash in the sinks of the shared kitchens, cat litter in the toilets of the shared bathrooms. “Throughout the day and evening, howls, screams and curses of troubled inhabitants ring through the premises,” the description continued. Where? A single-room-occupancy building operated by the Cambridge Housing Authority at 116 Norfolk St. The site, a former nuns’ residence, houses many people who were chronically homeless before they moved in.

The writer, Jeffery Mcnary, 73, lives there. He sent a passionate email on Jan. 23 to every city councillor, Gov. Charlie Baker’s office and the staff members he had praised, pleading for “seasoned, psychological support to back up the committed, hardworking and refreshing staff.”

Little has come of it in public, but Mcnary’s email has brought to light the challenges facing efforts to move people with long-term homelessness into permanent housing. The “Housing First” movement that arose in the 1990s and early 2000s gave the impression to some observers that simply providing housing would end the growing problem of homelessness. Even organizations that promote the idea acknowledge that some formerly homeless people will need services to stay and thrive when they get a permanent place to live.

“This is what we mean by Housing First: That homelessness is a problem with a solution, and that the solution is housing. For everyone,” a statement on the website of the National Alliance to End Homelessness says. Then it adds: “It never has been housing only, and it never should be. Supportive services are part of the Housing First model.”

In Massachusetts those services can be fragmented and sparse, people with experience in permanent housing programs for the homeless say. That includes Mcnary, who has lived at 116 Norfolk St. in The Port neighborhood since 2018. “When is there an engagement [with services] unless a resident goes into crisis?” he said. “Seventy percent of the people here need to engage with someone.” A social services coordinator from Somerville and Cambridge Elder Services works at the site 20 hours a week, on weekdays. At other times a “concierge” handles emergency or urgent needs, Mcnary said. One resident who felt himself sliding into a psychiatric crisis ended up calling an Uber, on his own, to take him to the emergency room, Mcnary said. 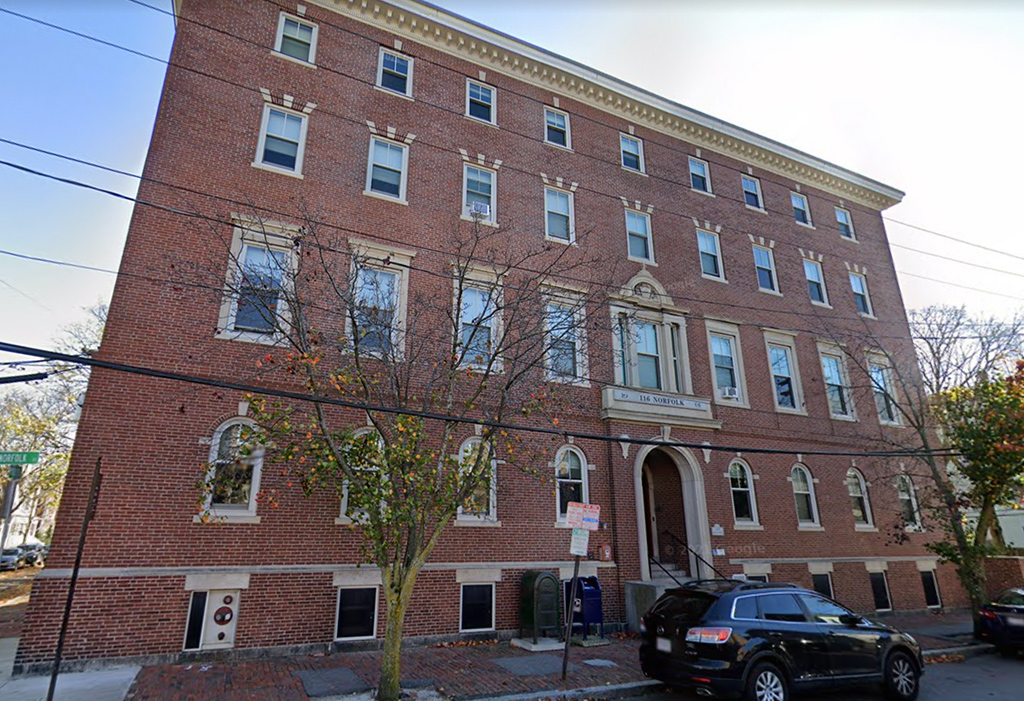 Cambridge Housing Authority executive director Mike Johnston agreed more services are needed for residents. “Currently the services are paid through the Executive Office of Elder Affairs and are not sufficient for full-time staffing or even the level of services that are needed to assist residents to move to more independent living,” he said. CHA is rehabilitating and expanding the building next year and working on a financial plan for the modernization that would include money for services. The housing agency acquired the 37-unit building in 1975.

“We are having discussions with various parties to help guide us through the services piece, as we are not just interested in renovating the bricks and mortar but are looking to create an environment that will assist residents to move forward on their own,” he said. One bricks-and-mortar change could convert the building into apartments from single rooms with common kitchens and baths. Some people in the field of housing for the homeless say shared kitchens and baths increase opportunities for conflict.

In the short term, Johnson said he had told managers in charge of the building to come up with a plan in response to Mcnary’s email. “They did respond with specific details and explained in detail what their next steps would be, which I cannot share with you other than to say they were appropriate responses,” Johnston said in an email. “Again, like any property manager, we have a responsibility to [ensure] that the terms of the lease are followed, but we are dealing with a vulnerable population and also need to move forward with some sense of compassion.”

Other agencies besides the housing authority face similar challenges in moving people from chronic homelessness into permanent housing. Danielle Ferrier, chief executive of Heading Home, which operates shelters, transitional and permanent housing sites in Cambridge, Boston and surrounding communities, described a system in which housing needs and service needs are funded by different government agencies and the service element is split up even more. “Say someone has a mental health issue, you access behavioral health from MassHealth,” she said. “Substance abuse [and] domestic violence, DPH.”

Like the housing authority, Heading Home’s permanent housing sites offer a social services coordinator who provides “light touch” help – putting residents in touch with a provider such as a therapist who can give mental health treatment, instead of offering the treatment onsite. The agency gets only “a few dollars for services” and must supplement that with fundraising, Ferrier said.

She and other providers of housing for formerly homeless people are backing a legislative proposal to establish a “flexible housing subsidy pool” to provide funding for “the medically complex needs of disabled men, women and children” who are homeless, according to the description of the bill on the state Legislature website. Los Angeles, with its huge homeless population, has similar funding.

A housing subsidy that also pays for services might reduce the fragmentation Ferrier sees. Yet there’s another problem even if there’s enough money: not enough therapists. “We do not have enough therapists to access, and we have seen extreme mental health and substance abuse problems,” exacerbated by the “extreme isolation” of the pandemic, said Ferrier, who worked as an outpatient therapist specializing in trauma for 15 years. “What you hear from me is worry.”

Even if an agency offers adequate services, residents don’t have to accept them. “We need to improve the system, but also there are a big group of folks who say ‘I don’t want that help,’” , Ferrier said.

“I keep offering it. That is what I keep doing but I can’t force them. Not everyone believes in therapy. Some people aren’t looking to change the way they live,” she said. Johnston at CHA echoed her observation.

On a recent Saturday afternoon, the building at 116 Norfolk St. was spotless and quiet. Still, a strong odor of cigarette smoke filled the hall on the basement level. The interior feels calm and timeless, with wood panelling and cabinets, high ceilings, a stained-glass hansom over the front entrance, and a graceful wood bannister curving along the stairs to the second floor.

“It blew me away when I saw the physical plant,” said Mcnary, who said he studied with the Jesuits, without being ordained, and 116 Norfolk St. reminded him of that time. Mcnary, who said he spends much of his time writing, ran unsuccessfully for the City Council in 2019 pledging not to accept contributions. He didn’t, but almost had to pay a fine for not filing a final financial report – documenting his zero contributions – on time. Mcnary has spent time in government service and politics, working for the administration of former Gov. Michael Dukakis, former State Sen. William Golden and Boston city councilor Bruce Bolling.

The quiet was deceptive, Mcnary said.”Most of the time around dinnertime it gets very explosive, particularly on weekends,” he said. “There are often misunderstandings. We’ve got a lot of people here that not so much can’t read as can’t comprehend what they read.”

Sometimes when he opens the door of his room to look out, “you’ll see people sitting on the floor next to an overturned garbage can,” he said.

After he sent his email, councillor Patty Nolan wrote back saying: “Thanks for asking those important questions and reminding us all of the need for more attention to the residents’ needs.” Councillor Jivan Sobrinho-Wheeler said he was “sorry you’re having to deal with this” and offered to talk to Mcnary by Zoom. McNary said technical problems on his end prevented this, though he had a helpful conversation with Sobrinho-Wheeler’s aide.

Sobrinho-Wheeler and councillor Quinton Zondervan have pushed the city to house homeless people in hotel rooms during the pandemic instead of congregate shelters; City Manager Louis A. DePasquale has resisted, partly because of the need for services. Both councillors have said they know of homeless people who are ready and capable of living independently.

The social services coordinator for the building, Jeffrey Clement, responded to Mcnary with an email agreeing: “While working at 116 Norfolk St., I too have seen the challenges of the shared environment part of congregate living. The pandemic has certainly heightened these challenges.” Clement focused on Mcnary’s complaints about tenants and their guests gathering together and not wearing masks, noting that he was heartened that only three building occupants had tested positive for Covid-19. All residents have now been offered vaccinations.

Johnston said a committee of CHA, Council on Aging, Somerville and Cambridge Elder Services staff members and related experts evaluates applicants for housing at 116 Norfolk St. to assess “their appropriateness for placement at this congregate facility” and how well the site can meet their needs. The team also meets at least quarterly to assess needs of individual tenants.

Mcnary said he had a difficult time getting in and was ordered to undergo a physical examination by his doctor, a requirement he found strange. He also needed to enlist the support of then vice mayor Jan Devereaux, he said. He did not recall meeting with the committee.