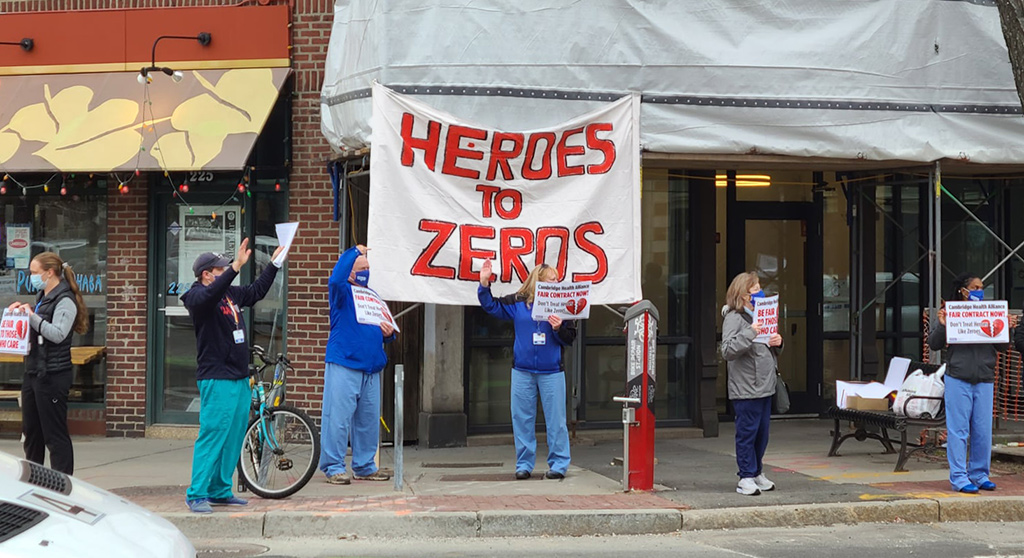 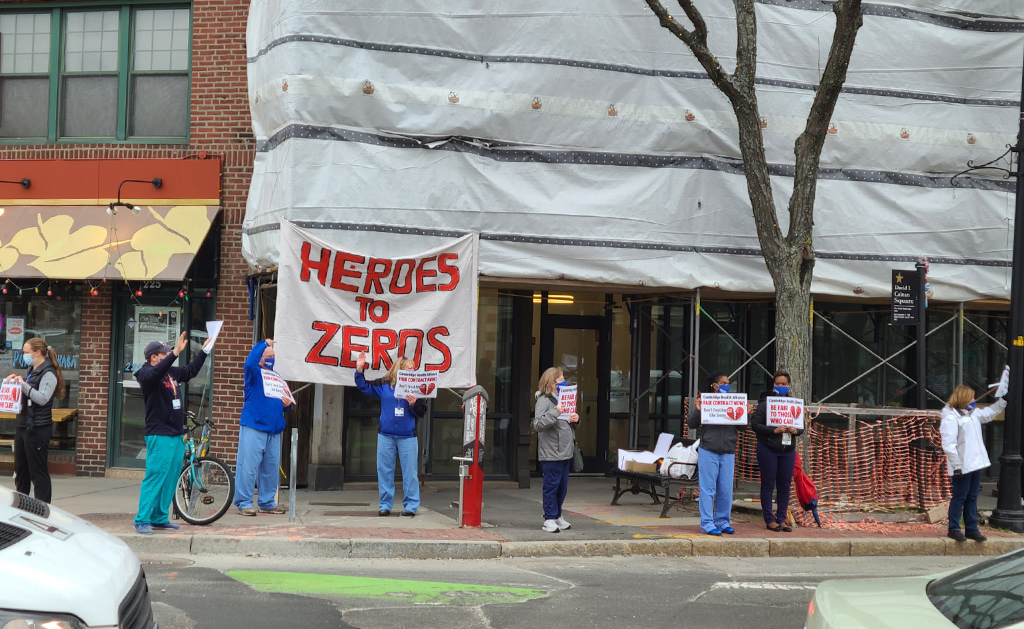 “It’s not just about money, it’s about what we went through for the past year,” said Suzanne Dailey, co-chair of the Massachusetts Nurses Association bargaining unit at Cambridge Hospital. “We feel very disrespected.” 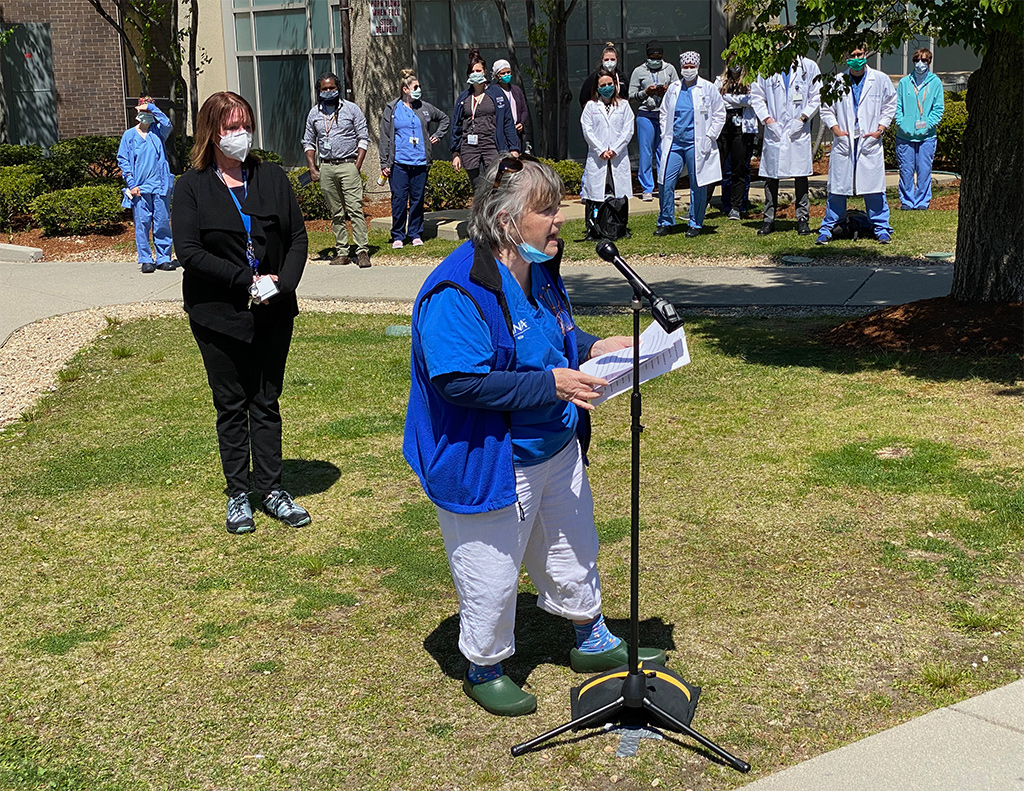 In a statement, CHA said that during the pandemic “our nurses have made life-saving contributions to our community and are a highly valued part of our team,” and the Alliance has been “negotiating in good faith to reach a fair contract for our Massachusetts Nurses Association-represented nurses.”

The Alliance’s final offer “proposed wage increases, building on our already market competitive salaries and a comprehensive earned time program – currently in place in all other aspects of CHA – for MNA nurses. We have also made substantial changes to our initial proposals in response to MNA requests.”

The last time nurses spoke against the Alliance publicly was May, when they said shortages of protective gear were contributing to them catching Covid-19, while the health care system claimed none had been infected on the job.

An information flyer being distributed by protesting members of the Massachusetts Nurses Association.[/caption]

Dailey said the union has gone three years without a new contract and negotiations were suspended for six months because of the pandemic. The lack of a contract meant union members got only longevity wage increases, no raise, she said.

The main sticking point for the union was the Alliance’s demand that nurses get all their sick time, vacation time and other time-off entitlements in one combined “earned time” benefit, Dailey said. This would have reduced time off for some longer-term employees, she said. The union would have gone along with the change if the Alliance guaranteed those employees wouldn’t lose any time, but it rejected the proposal, Dailey said. “We were very disappointed,” she said. 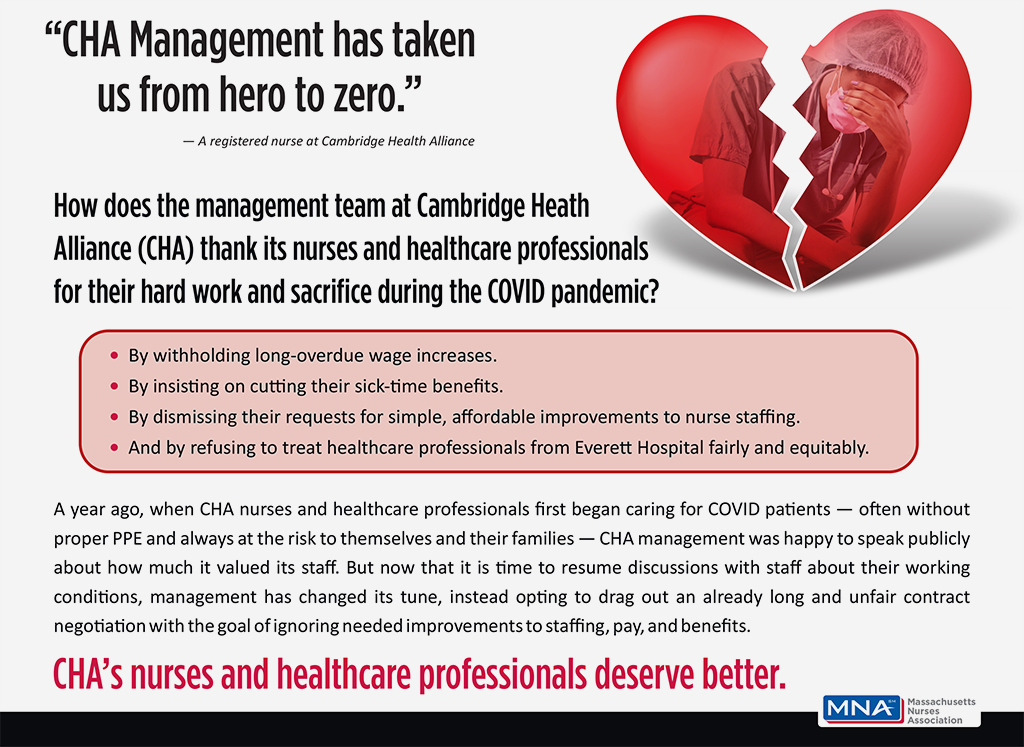 An information flyer being distributed by protesting members of the Massachusetts Nurses Association.

The union decided to “turn to the community” by organizing “informational picketing” after the Alliance made its final offer last month, Dailey said. Union members carrying the “Heroes to Zeros” signs have demonstrated at Cambridge City Hall, Inman Square, in Somerville’s Davis Square and in Everett. More demonstrations are planned for April 27 at CHA Cambridge Hospital, CHA Everett Hospital and the CHA Somerville Campus. The Cambridge event will be held from noon to 2 p.m.

Before a fact finder

Other issues in dispute are pay increases, including retroactive pay; nurse staffing and treatment of non-nurse health care professionals, according to the union. The dispute is now before an impartial fact finder who can decide which proposal – the Alliance’s or the union’s – should be adopted. The decision isn’t binding, but the Alliance could ask for an order enforcing the fact finder’s decision, said Massachusetts Nurses Association spokesman Joe Markman.

Dailey, who said she’s spent her entire 30-year career at the hospital, said the pandemic “was not like anything we have ever experienced … Crazy hours in units where you had never worked, exposing yourself, exposing your family.” She had been working as a clinical leader at the CHA Windsor Street primary care clinic when Covid-19 arrived. “I got deployed to work at the hospice clinic,” Dailey said. “You just step up.”

“This has been very disheartening to the membership,” Dailey said, speaking of the failed negotiations. In contrast, the Alliance statement said: “We have made every effort to reach an agreement with the MNA and we are confident that our offer is fair, supports outstanding patient care and reflects respect for our nursing community.” It urged the union to “move forward with our proposal to provide immediate benefits to our valued nursing team.”

This post was updated April 21, 2021, to add a photo and correct the spelling of a name: Joe Markman.