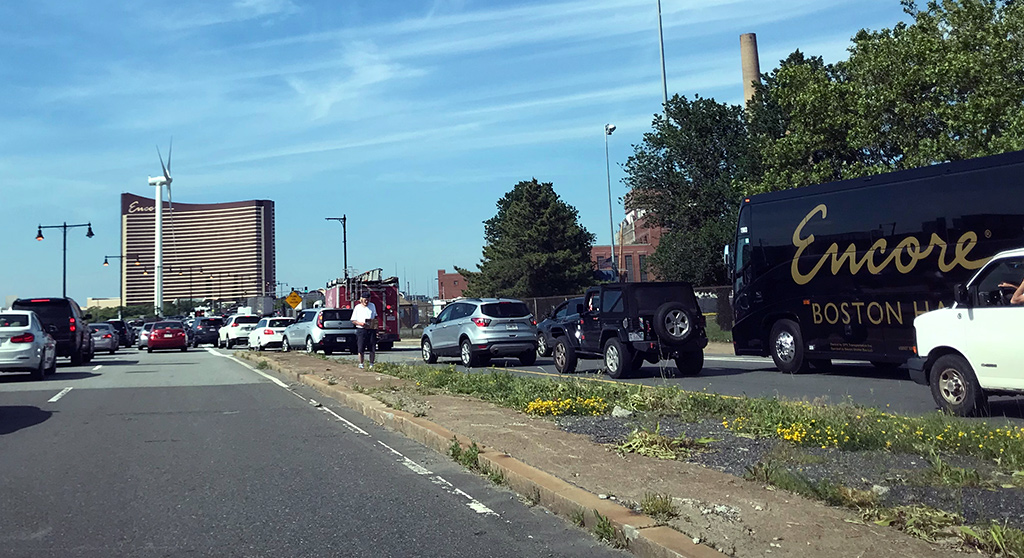 The Encore casino in Everett, which is hosting coronavirus vaccinations, is seen from Route 99 in June 2019. (Photo: Marc Levy)

A regional collaborative to administer Covid-19 vaccinations to residents of Cambridge and communities north and west of the city as well as the general public will begin operating after weeks of waiting for the state to provide vaccine. Gov. Charlie Baker announced the opening of the Metro-North Regional Collaborative on Monday.

There were few details initially, but on Tuesday the collaborative issued a press release saying it has begun administering vaccine at the Encore Boston Harbor casino in Everett and the Gantcher Family Sports and Convocation Center on Tufts University’s Medford campus. A third site, near the Target department store at 176 Somerville Ave., Somerville, will open to the public next week. Cambridge Health Alliance has been vaccinating its own patients there and began offering its own patients vaccinations at Encore on April 27.

CHA will act as the medical provider, and staff will come from local health boards of the nine communities in the collaborative, including Cambridge and Somerville, the Tuesday announcement said. Tufts is also a member of the collaborative. In its application to the state to act as a regional Covid-19 vaccination collaborative, the group pledged to administer at least 750 doses of vaccine a day and said it could give as many as 5,000 shots a day. Any state resident can make an appointment at home.color.com/vaccine/register/metronorth.

Cambridge chief public health officer Claude Jacob made his own announcement at Monday’s meeting of the City Council, saying he had “exciting news … We will now have the vaccine supply to fully operate the collaborative.” But there were few details then except for the previously named vaccination sites.

Supplies were cut off

The collaborative said Tuesday that the state will allow the group to reserve 25 percent of its vaccine allocation for residents of the nine communities and plans to target “underserved persons and areas,” perhaps with mobile and popup clinics. This is similar to what Cambridge has already been doing.

The state Department of Public Health approved the collaborative March 16 but did not allocate vaccine to it.

Cambridge and its partners proposed the collaborative after state officials cut off vaccine supplies to most local health departments for clinics serving their residents. Besides helping to organize the collaborative, the Cambridge Public Health Department successfully obtained vaccine for special projects targeted to underserved communities, such as vaccinating elderly and disabled residents of public housing developments in their buildings and bringing vaccinations to homeless shelters.

Last week the health department started offering shots of the one-dose Johnson & Johnson vaccine to anyone 18 and over who lives or works in the city, without appointments, at sites in North Cambridge and the CambridgeSide mall. The department is using doses from its allocation of 3,000 shots for vaccinating residents of hard-hit neighborhoods, spokeswoman Susan Feinberg said.

Sixty people were vaccinated at the first session Saturday at the Reservoir Church in North Cambridge, Jacob told councillors.

City Manager Louis A. DePasquale told councillors Monday that “the number of people vaccinated continues to grow.” He added: “We’re making progress, but we still have a ways to go.”

The weekly Cambridge figures reported by the state show that more residents are getting at least one dose every week, but the pace of additional vaccinations has declined. The number with at least one dose increased 26 percent from April 8-15; but it was 18 percent the next week; and 16 percent in the most recent week, from April 22-29.

The number fully vaccinated didn’t show such an obvious pattern. It rose 22 percent from April 8-15; then 16 percent the next week; and was up 17 percent in the most recent week.

Jacob disclosed that the city health department program to vaccinate homebound residents ended Friday; it had paused while regulators suspended use of the Johnson & Johnson vaccine to investigate rare side effects of blood clots in younger women. A total of 104 residents received shots. Jacob said any additional homebound residents seeking vaccinations will be referred to the state Department of Public Health.

Vaccinations for students are being prepared, with clinic expected to come to the high school