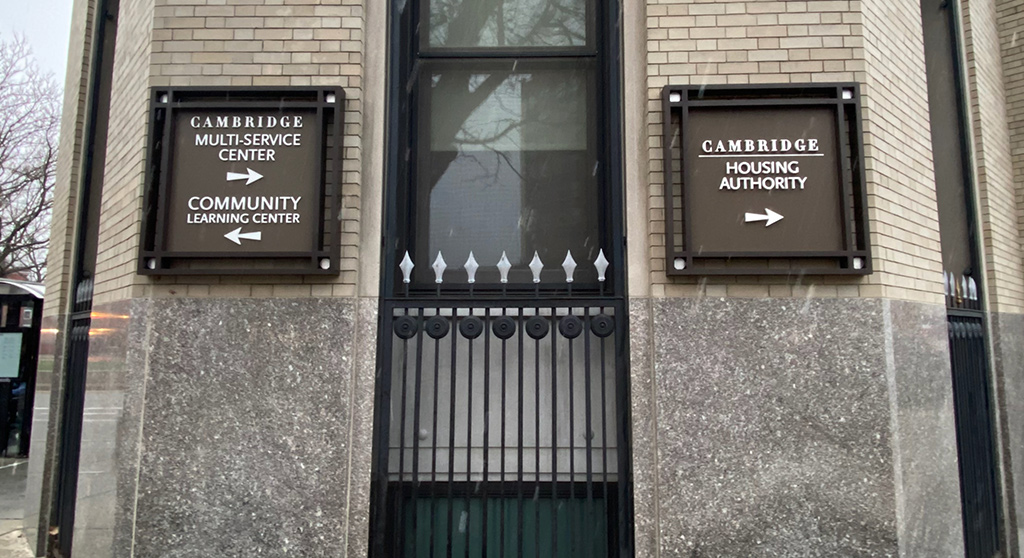 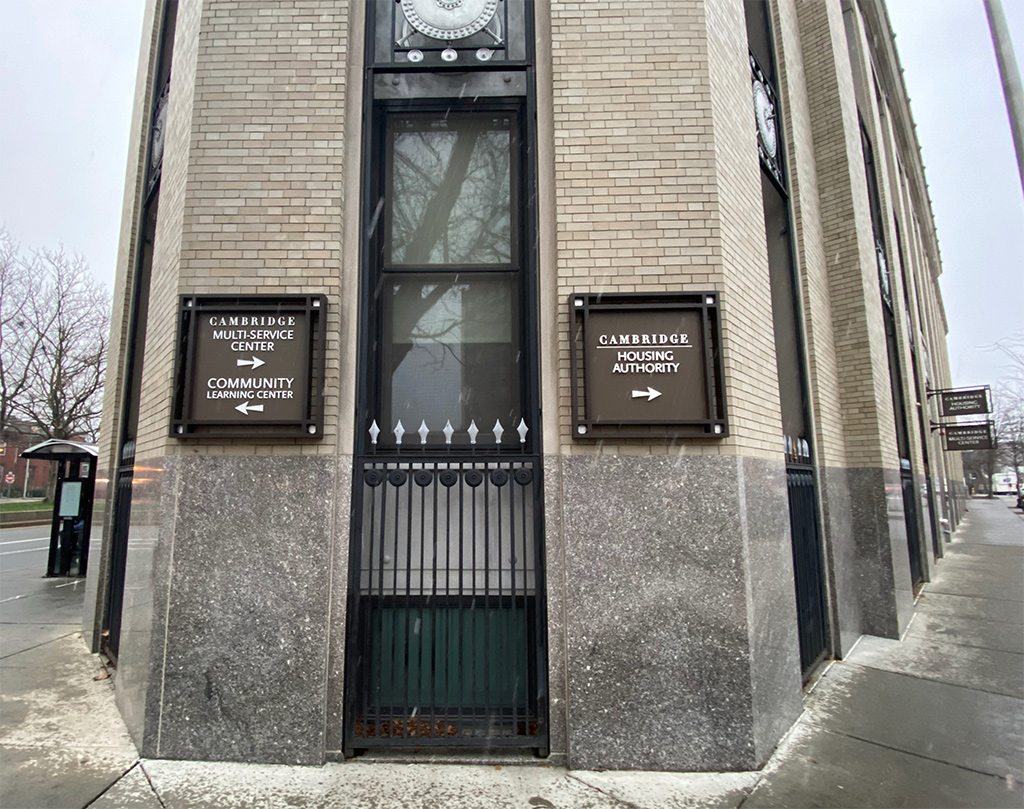 The Cambridge Housing Authority has a headquarters on Green Street off Central Square. (Photo: Marc Levy)

As the city’s eviction moratorium nears its end on June 15, the Cambridge Housing Authority has filed seven eviction cases against low-income tenants in the past three weeks after months of not filing any. At the other end of the income scale, the owner of the North Point luxury housing development near Lechmere continues to seek more evictions than any other Cambridge landlord, but most are for misbehavior or some other reason that doesn’t involve missing rent payments.

The authority earned praise from city officials assigned to help tenants keep their homes in the pandemic, and from lawyers for tenants. They said it acted quickly to avoid eviction when tenants lost jobs, urging them to qualify for lower rent and making it easier for them to apply. Cambridge and Somerville Legal Services, which has represented tenants facing eviction during the pandemic, didn’t respond to a request for comment on the new filings by CHA.

CHA executive director Mike Johnston has said the agency was trying to avoid going to court at all, because even if tenants ended up staying in their homes they would have a blot on their record that would make it harder to find housing if they needed to move.

Asked about the recent court filings – four for nonpayment of rent and three for other causes – Johnston said the authority has tried to help tenants tap into state and local aid, including a new state program aimed at supporting owners of subsidized housing. The program, Subsidized Housing Emergency Rental Assistance, allows landlords such as CHA to apply for money to replace some tenant payments, “but we have to get tenants to agree to the application,” Johnston said.

A CHA social work intern “has reached out to each resident with a delinquency numerous times to identify what problems there might be interfering with rent payments and to offer to work with them. It is sadly the case that some tenants do not respond to such outreach,” Johnston said in an email.

“I am comfortable in saying that no eviction cases have been initiated without every effort being made to avoid this result. CHA intends to continue working with residents, as our goal is to limit evictions to those where there is no alternative,” Johnston said.

The city imposed an eviction moratorium in April 2020. It did not prevent landlords from filing a case but barred them from putting tenants out of their homes if the landlord won in court. (Despite the ban, court records indicate that eviction orders were carried out in 14 cases while the city’s moratorium was in effect.) After the moratorium ends June 15, tenants who lose in court can lose their homes.

An eviction moratorium ordered by the U.S. Centers for Disease Control and Prevention for public health reasons – to protect tenants who’ve been evicted from moving into crowded quarters such as homeless shelters – will remain in place until at least June 30; few Cambridge tenants have used it, according to tenant advocates. Tenants must declare that they can’t pay rent because their income dropped, they lost their job or hours, or have extraordinary medical expenses, and must also claim that if they lose their homes they are likely to move into a shelter or double up with others. And the CDC eviction ban doesn’t protect tenants facing evictions for nonpayment reasons.

In May, landlords filed 14 eviction cases against Cambridge tenants in Cambridge District Court, including seven for nonpayment of rent. That was more than the previous month’s total of five cases, three for nonpayment. Three more cases were filed in the first week of June.

The total in Housing Court was seven cases in May, two for nonpayment, and no filings in the first week of June. That was fewer than in April when landlords filed 10 eviction cases in Housing Court. But five of those cases were against a company that apparently rented apartments to lease to short-term tenants. Those five cases and two others were for nonpayment.

Aid to those at risk

The city has distributed $4.6 million in financial aid for rent and other expenses to more than 1,700 households, City Manager Louis A. DePasquale told city councillors when they asked about the end of the moratorium at their May 26 meeting. Public housing tenants were generally not eligible because they could get their rent reduced and the housing authority asked the city to refer applicants for city help back to CHA.

DePasquale also pointed to state programs helping tenants and landlords. The state has expanded programs and initiated new ones, especially after its own eviction moratorium expired last October. A total of 235 Cambridge households got about $1.1 million in state aid for rent and mortgage payments from March 1, 2020, to May 28 this year, according to the state’s Department of Housing and Community Development.

Still, the state’s own reports show that statewide, thousands of applications for the two major aid programs are rejected each month, and the median time to get a decision remains close to two months – half of applicants wait longer and half shorter. In April, 6,354 tenants and 83 landlords applied for help from the Rental Assistance for Families in Transition and the Emergency Rental and Mortgage Assistance programs; in the same month, the state rejected 7,361 applications previously filed, according to DHCD reports to the state Legislature. The median time to a decision was 57 days.

The agency says incomplete applications are the main reasons for the wait times and rejections. Around 80 percent of filings are incomplete, and it can take weeks of back-and-forth communications to resolve problems, according to DHCD. Some never are. The seven-page application asks for documents such as proof of identity and evidence of the applicant’s “housing crisis.” The state is paying regional housing agencies to help people apply.

Reports show that between March and April, the number of tenants approved for the two programs dived – for RAFT, to 615 applicants in April from 5,423 in March; and for ERMA, to 37 in April from 267 in March. According to the state, in April a large number of applications with missing information were rejected after a wait of several weeks.