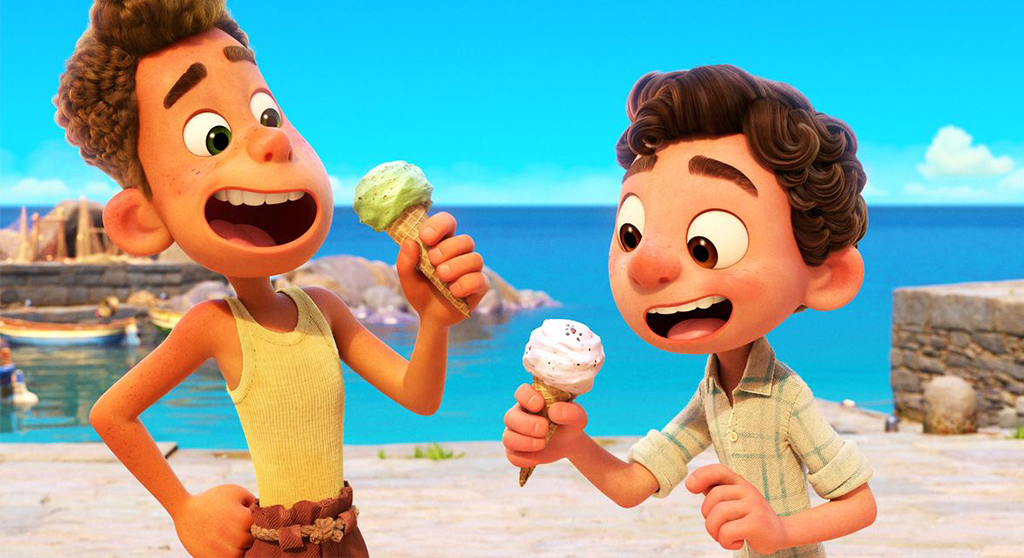 “Luca” is Pixar at its most delicate, an immaculately structured story that might not be the grandest the studio has released, but is one of the most honest. There’s a humanism between the moments of humor and fantasy that anchors the film and makes it a must-watch, and not just for Pixar fans.

The film whisks us away to a fictional seaside town in Italy to meet Luca (Jacob Tremblay), a sea monster who has been advised his entire life to stay away from shore – from the “land monsters.” But as in many coming-of-age tales, he sets off to find a route away from a humdrum life, in this case for a bike race with new friend Alberto (Jack Dylan Grazer), a wanderer left to his own devices for too long. If the stakes seem low, that’s purposeful; the real soul of the story comes through the connection between Luca and Alberto, their newfound friend Giulia (Emma Berman) and the family they’ve left behind and made anew.

Masked in this is the story of a young boy/sea monster looking to live in a world that’s been made to fear him, and to find a community of fellow outsiders. Alluding to stories of LGBTQ+ youth, “Luca” offers potent, emotional resonance even if the subtext is merely that. Still, the message of learning to accept who you are in the face of animosity is a tried and true one, and rendered to tremendous effect.

It’s directed with a clear affection for Italy by Enrico Casarosa, best known until now for the short “La Luna,” which played before 2012’s “Brave.” The burnt oranges and sunset yellows of the seaside village are inspired and animated beautifully, and the elements of the rain that beats down on them, or the light reflecting from the night sky, is rendered to thrilling effect. “Luca” further comes to life through the voice work by the three leads, who deliver spirited and individualist performances, and bolsters itself with character animation that ever so lightly strays from the monotonous style Pixar has used so many times before. It also stands apart from Pixar’s most popular and frequent narrative beats with a deliberate pace that allows room for the characters and viewers to breathe.

Rather than asking the audience to be wrapped up in pure distraction or deferring to emotional manipulation, “Luca” is happy to just be and exist in the moment, distilling nostalgia we possess for childhood friendships and the breeze that crests off the coast into a film that’s unflinchingly whimsical. (The screenplay is credited to Jesse Andrews and Mike Jones from a story by Simon Stephenson.)

Plenty have already dubbed the film “lesser Pixar” or even Studio Ghibli “lite.” I’d argue the opposite, though the charge only bolsters the film’s place as one of my favorites with 2017’s “Coco” and other studio highlights (“Inside Out,” “Finding Nemo,” “Toy Story”). Casarosa has managed to make a story that should be larger than life seem impossibly yet purposefully restrained – quite the feat with otherworldly creatures at center stage, but the film is infused with the joy of liberation and the fear of being known and all that falls in between, creating a story that is as willful and defiant as it is magical.