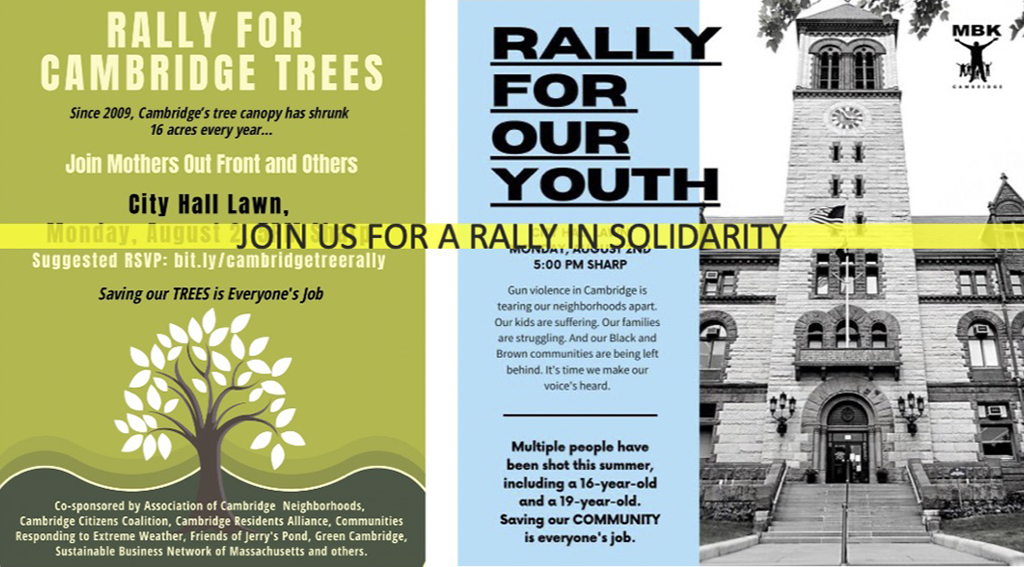 A “Rally For Cambridge Trees” happens Monday on the lawn of City Hall. It is organized by concerned citizens and a coalition of community organizations who care about the quality of life in Cambridge and uphold stated values of social equity and economic justice. Our message: Retaining mature, healthy trees must be a top priority as all development plans are drafted and shared with residents.

Why trees, why now?

On June 28, the council voted to support a tree protection ordinance intended to slow tree destruction by putting their preservation front and center. Staff must honor that intent. In urban environments, large numbers of new trees do not survive long; for those that do, it can take 50 to 60 years to display the same large branching and leaf structure that furnishes shade comparable to existing trees. We are also running out of space in Cambridge where older trees and new ones can thrive. In 2009, the city’s canopy coverage was 30 percent. In 2014, it was 26 percent, and it has steadily decreased since then; the city’s annual loss is enough to fill a dozen football fields.

This year, the Department of Public Works is caring for roughly 19,000 public trees and planting 950 young trees. But it will take 4,300 new trees planted every year to offset the rate of tree canopy decline, so we cannot afford to lose our existing tree canopy.

Cambridge permits affordable housing developments to cut down mature trees without complying with its tree ordinance. The Jefferson Park Federal expansion in North Cambridge plans to remove 144 trees, many of which are healthy shade trees. The abutting Jefferson Park State, which was recently renovated, had most of its tree canopy cut down, and the young trees planted to replace them are not thriving.

City government also makes numerous exceptions for profitable projects, such as the massive Volpe redevelopment in East Cambridge. There, more than 130 mature trees are on the chopping block. In Alewife’s former wetland, profitable high-rises have been built with few large trees to shade the neighborhood. And the city plans to remove a number of large, healthy trees at the Tobin and Vassal Lane schools by Fresh Pond in West Cambridge to accommodate a 1.3 million-gallon stormwater tank.

We know there are better ways for development to move forward. Pitting trees against development demonstrates the absence of creative long-range planning, which prevents us from attaining the city’s climate goals. What Cambridge residents expect and need is a much more complete, transparent and well-vetted design process that earmarks saving our mature trees as a first-tier priority.

We must strengthen the city’s tree canopy as a public health measure to protect the well-being of residents in this era of climate change and extreme weather.

We’re all in this together – residents, the city and developers. The trees can’t speak, so they depend on us to do so.

We’re speaking now, and counting on you to listen and act.

Councillors Patty Nolan and Quinton Zondervan and Mayor Sumbul Siddiqui have submitted a policy order for the Monday council meeting that offers a promising start: it would redefine trees as essential infrastructure and asks the city manager to report back to the council about saving trees on any city project or any project in which the city is involved.