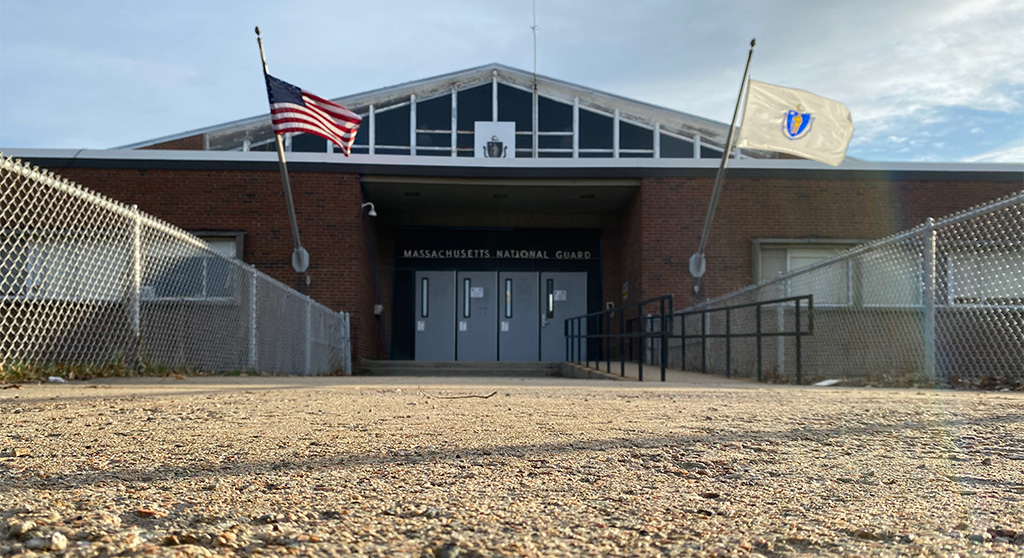 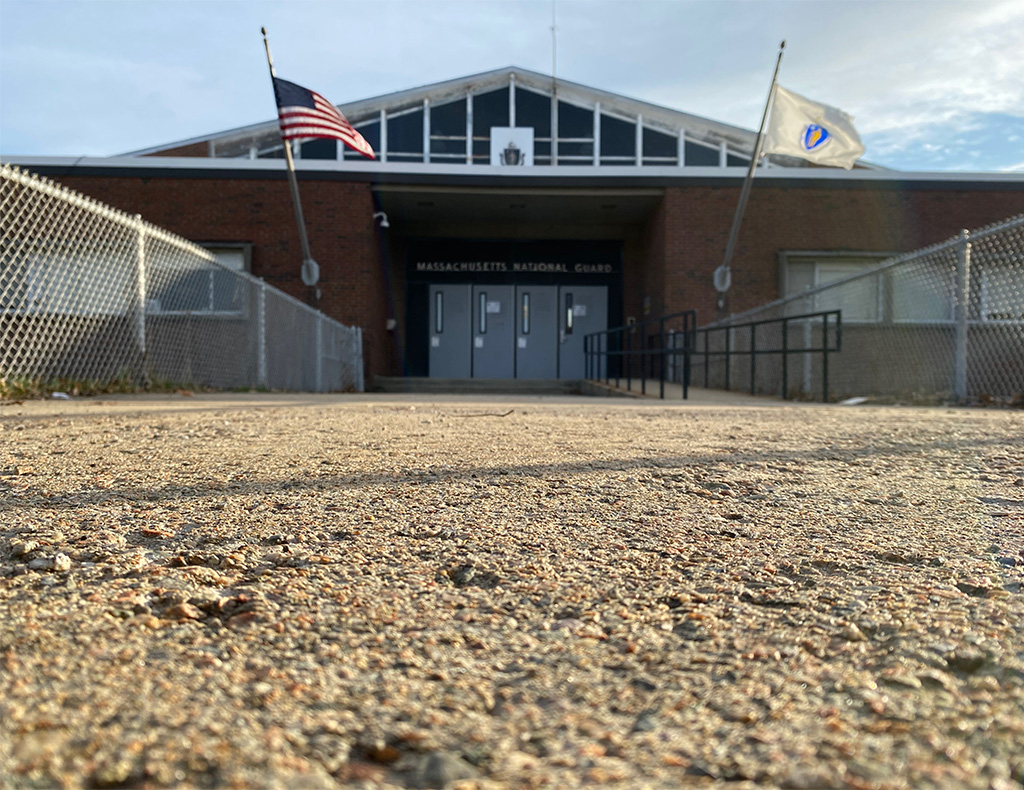 The Massachusetts Army National Guard armory in Cambridge is at 406 Concord Ave., next to the Tobin School and Vassal Lane Upper School campus. (Photo: Marc Levy)

The state Armory Committee voted unanimously Monday to look at transferring a portion of its land in Cambridge to city ownership, which officials called “the first major step in a multistep process” that involves other state agencies, the City Council and approval by the state Legislature.

Cambridge could wind up with 30,752 square feet that the city asked to buy out of the state’s 122,560-square-foot armory site, city director of communications Lee Gianetti told city councillors Monday. The land would be bought “for general municipal purposes” but might be looked at for use as part of the neighboring schools, assistant city manager for finance David Kale said Tuesday.

City councillor Patty Nolan has been pushing the city to buy the armory since her time on the School Committee, and said Tuesday that she was excited by the possibilities. “Even at this late date, even if we’re not changing school building plans, even that slight chunk could affect transportation within the site and hopefully add some green space,” she said.

The armory is at 406 Concord Ave., a neighbor to the Tobin School and Vassal Lane Upper School complex at 197 Vassal Lane being prepared for a $250 million reconstruction, reopening to students in the fall of 2025.

The complication of the next steps means there’s no specific timeline for when the land could become Cambridge property; on its way to a vote by the Legislature, first the land must go through a process with the Executive Office of Public Safety and Security and Division of Capital Asset Management and Maintenance and be offered for use by other state agencies, Kale said. He was also unwilling to speculate on a price at this stage.

The road to “maybe” 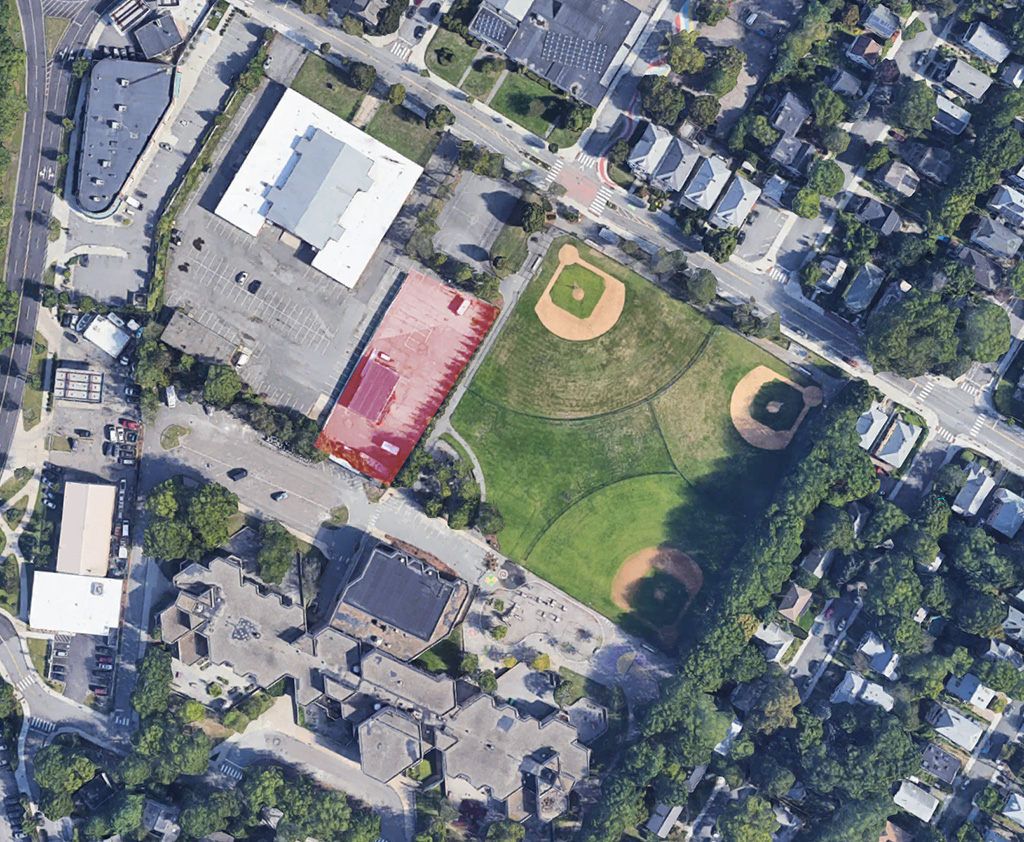 A section of state armory land next to the Tobin and Vassal Lane schools and Callanan Playground, and highlighted in red at center, could be sold to Cambridge. (Image: Google)

The land in question is a rectangle tucked into the L defined by the Tobin and Vassal parking lot and Callanan Playground. Surrounded by Armory or school property and set back from Concord Avenue, the space is now being leased by contractor W.T. Rich as a staging area for school construction.

Nolan said she renewed her calls for an armory purchase after election to the City Council in 2019, and pulled together a meeting with state legislators for the area Sen. Pat Jehlen and former Rep. Jonathan Hecht, along with state Rep. Marjorie Decker. Nolan and vice mayor Alanna Mallon went to the State House for a meeting with the legislators, she said, where “they explained the whole process, they agreed to work on it, they sent a letter and the city at that point sent a letter.” Nolan credits the state legislators for paving the way for a purchase.

“Since it’s state land, it made a lot of sense to me that the state delegation should be involved,” Nolan said.

A Jan. 27, 2020, letter from City Manager Louis A. DePasquale to the state official overseeing the land says the city is “very interested” in that same roughly 3 acres being used by W.T. Rich, though “of course, if the entire armory property were available, we would be interested in that as well.” (In July 2020, city officials also expressed specific interest in acquiring a 10,000-square-foot strip that would divide the school and armory parking lot,)

The response came Feb. 7, 2020, from retired Col. Timothy Mullen, quartermaster for the state’s National Guard Joint Force, that “after careful review … the Military Division has determined they cannot permanently dispose of this area” because the armory “is fully utilized and occupied and provides a key location” for supporting training, administration facilities and logistical storage space for units of the Massachusetts Army National Guard.

State military resistance had turned around a year later, and by May 6, the city had sent a formal request to Mullen for a purchase. A message was left with Mullen on Tuesday seeking comment.

Kale said the existing lease to W.T. Rich as a construction staging site “clearly probably went into [the state’s] decision-making, in the sense that they were able to continue their operations while making a commitment to lease a portion of it,” Kale said. “We’ve asked at various times and the answer was no … Based upon the fact that we were asking for a portion, I think was was something that they wanted to consider.”

A lag and lacking records

Councillors discussing the Tobin and Vassal schools asked March 27, 2017 – nearly four and a half years ago – that the city look at buying the armory site. It could be a way to address early childhood education needs and school population growth expected with Cambridge’s continuing boom in homebuilding, they said.

City councillor Marc McGovern, who was mayor at the time, said this week that it was not clear to him why approaching the state about the armory land took so long. In addition, “my intent, and I believe the council’s, was for the entire property,” McGovern said. 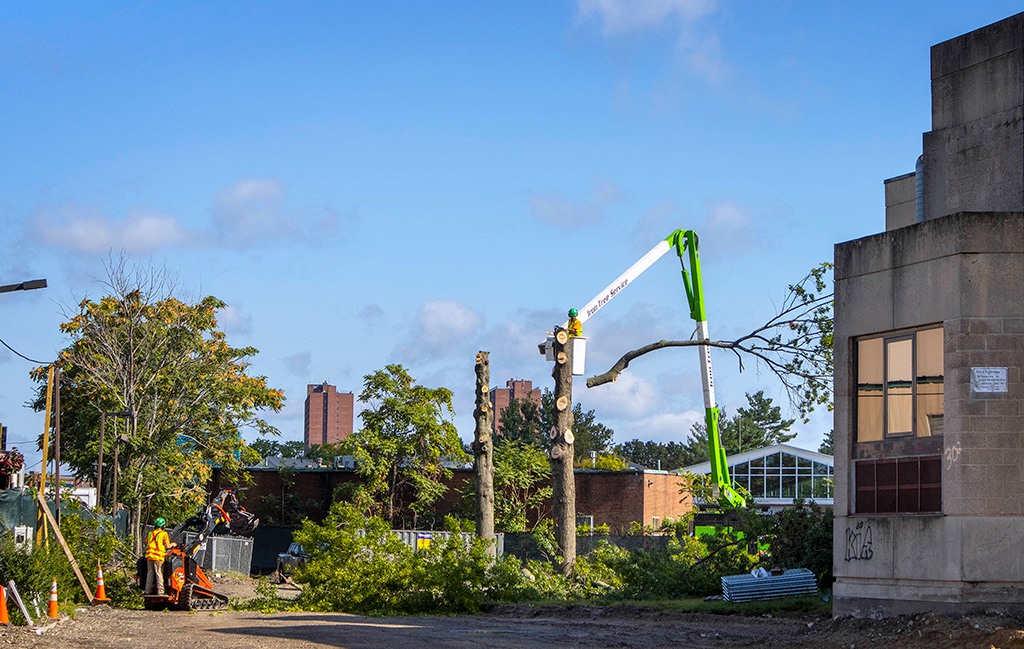 As plans for the Tobin and Vassal Lane schools developed, the parcel become seen as a way to expand the footprint of the campuses and allow for flexibility in design that could save trees from destruction.The city says it will remove 94 of 129 existing trees on the site, or 73 percent, while planting 374; it took down three mature oaks Friday with the explanation that talks about the armory weren’t far enough along to justify delay. “The city’s request to purchase the property is presently before the Armory Committee for review, thus limiting our ability to review this location as a feasible alternative location,” said a memo from city staff. “Uncertainty associated with [the armory’s] alternative location makes it unfeasible” if construction is to stay on schedule.

Asked about the lag between the current approach to the state and the council’s request in 2017 – which came a couple of weeks after he was set to return from serving as town administrator in Belmont – Kale said he didn’t “have that information.” Nolan agreed Tuesday that there seemed to be few city records available about efforts to acquire the armory.

Use by the city

Nolan continues to think that the full 122,560 square feet of land would be better used by the city – which according to her research transferred it to state roughly 80 years ago in exchange for a site in East Cambridge. The armory is now known mostly as a voting location and road-test site for the Department of Motor Vehicles.

“One of the things that has always puzzled me as someone who lives in the neighborhood is that the armory seemed incredibly underutilized,” Nolan said, describing going to the site once a week for months to document the action there – and finding little or nothing going on.

Meanwhile, the Massachusetts National Guard decommissioned its West Newton Armory in June 2019 and transferred it to DCAMM, which declared it surplus after no state agency expressed interest in it. Early this year, Newton bought the site for $1 and a promise to turn it into affordable housing, according to a city report.

“We should have worked harder starting years ago,” Nolan said of buying Cambridge armory land. “I am very disappointed this didn’t happen earlier, because it may well have affected the placement of some of the early childhood centers at the Tobin School.”

Though the city’s Jan. 27, 2020, letter to Mullen says that the purchase was wanted to “greatly enhance the school and open space project, by increasing the open space and improving access to the site,” Kale signaled in a whipsaw of language on Tuesday that residents should not assume the land will become part of the schools complex. “It can be a variety of things. But clearly, the conversation all along has been that basically this would allow us to take a look at the site design for the Tobin School project – for general municipal uses,” Kale said.