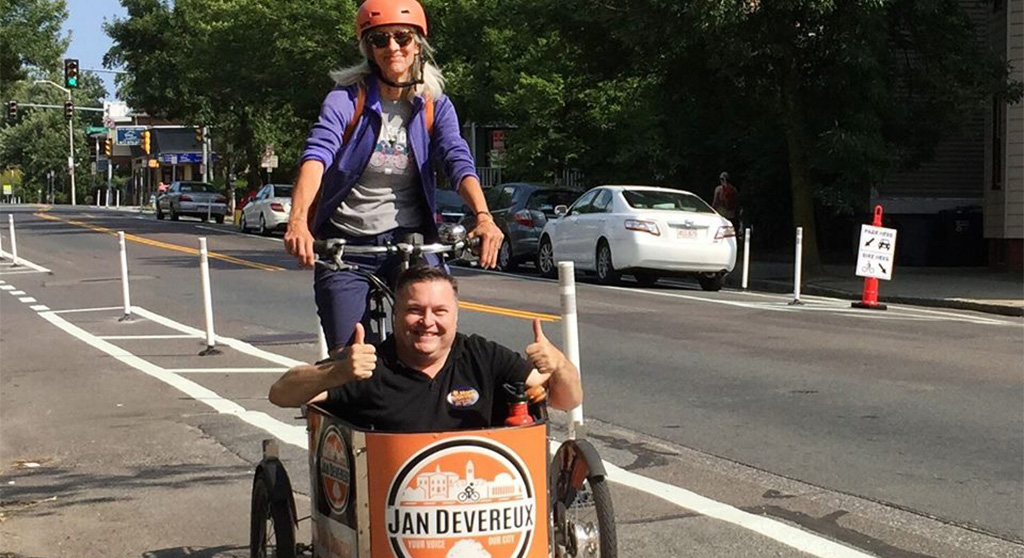 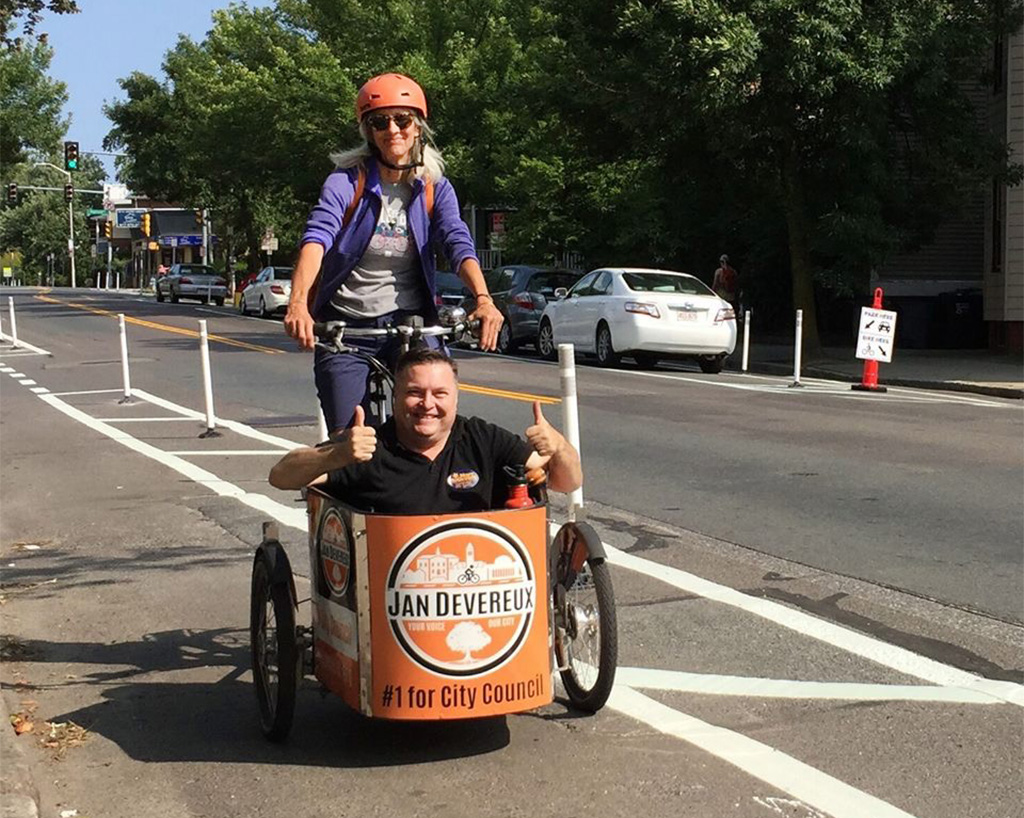 Looking back on my two terms on the City Council, I am most proud of the work I did to advance bike safety and sustainable “mode shift” in Cambridge. Some will recall that I campaigned on a cargo bike decorated with my logo, and that I rode an orange bike while wearing an orange helmet.

Sure, I sometimes used transit or drove my EV to City Hall when there was snow and ice. But much more often, and even in a light rain, I biked home in the dark, and the thrill of riding quiet, nearly car-free streets and feeling the rush of cool air on my face was immense. I’m still riding, though less often now that I work from home, and I feel a small thrill when I bike past cars gridlocked on Fresh Pond Parkway on my way to shop for groceries.

One of my best memories is the opening celebration for the protected bike lanes on Cambridge Street in 2017, when I carried then vice mayor Marc McGovern in the front of my cargo bike for a lap up and down the newly protected section near Cambridge Rindge and Latin School. Following that, Marc and I worked closely to draft and pass the original Bike Safety Ordinance that set a schedule for requiring protected lanes to be installed on major streets throughout the city.

By making biking my default mode of transportation, I showed that it is possible to change one’s habits, even after decades of driving most everywhere, and that you do not need to be a young person to make such changes. You do need the will to do it – and you need a city whose leaders care enough about your safety and about sustainable mode shift to stand up to people who feel entitled to drive and park easily and inexpensively everywhere they go. We are fortunate to live in such a city, though there is still much room for improvement to reach the level of bike shift being achieved in other cities, most notably Paris.

Since leaving the council at the end of 2019, I have been pleased to see the Bike Safety Ordinance strengthened and protected lanes installed on several critically important routes, including on Massachusetts Avenue between Harvard and Central squares. When I commuted to City Hall, I generally avoided riding on Massachusetts Avenue out of the fear of being doored or right-hooked by a turning vehicle; the new protected lanes have greatly reduced that risk, and people in cars should be grateful that their chance of unintentionally injuring or killing a person on a bike is now less. I am grateful that the ordinance was updated in 2020 to require protected bike lanes to be installed on most of the rest of Massachusetts Avenue by April.

That is one reason I am so troubled by the fierce opposition raised by some stakeholders to installing quick-build bike lanes along the section of North Massachusetts Avenue between Dudley Street and the Arlington line. This is not only a bike lane project: It adds a dedicated bus lane that will provide faster, more consistent service to the thousands of passengers on the MBTA’s busy 77 bus route. Buses are used by many seniors and people who cannot afford to own a car; transit priority promotes equity and environmental sustainability – and it reduces congestion for others who have no alternative but to drive. As a result of these two improvements, more people will be able to switch away from relying on private vehicles for transportation in this heavily used corridor, and many residents have voiced strong support for the project. Fewer people relying on cars means less carbon emissions and less air pollution that increases the risk of asthma, dementia and other health conditions among residents.

Contrary to what some residents insist, there already has been and will continue to be significant community outreach to refine aspects of the implementation, with a final meeting at 6 p.m. Oct. 28. The project adds 20 metered parking spaces on five side streets (active only between 10 a.m. and 6 p.m. to benefit local businesses) and allowing the southbound bus lane to be used for 15-minute parking and loading after 9 a.m. after the peak morning rush for bus commuters. The North Massachusetts Avenue area already has several privately owned parking lots that serve businesses and could potentially be rented by residents at other hours. In addition, the city will follow its established process to create on-street parking for residents with disabilities. Residents must shake the notion that their real estate taxes (or their landlord’s) entitle them to park on the street directly in front of their home.

The ordinance’s timeline does not require a full street reconstruction; instead, all work can be done quickly and cheaply using paint, occasional sign changes and installation of flex-posts or bollards. Actual installation can be done over a few nights, and with winter coming, now is the time to do the street work that cannot be done in cold weather. For example, applying the bright green thermoplastic markings for bike lanes isn’t possible below about 40 degrees.

I urge all city councillors and candidates to support implementation of the quick-build lanes this fall without further delay. Running the clock on implementation leaves people on bikes at continued risk of injury or death especially as the daylight hours shorten. And, yes, people biking after dark should always light up and wear a helmet, but even well-lit, helmeted cyclists need the protection of protected lanes – and, in fact, are entitled to such protection under city law.

This post was updated Oct. 21, 2021, to eliminate a reference in the photo caption to Jan Devereux and Marc McGovern being vice mayor and mayor at the time and Oct. 29, 2021, to correct McGovern’s role at the time.