‘Belfast’: In Ireland for the violence of the 1960s with time for schoolboy crushes and matinees 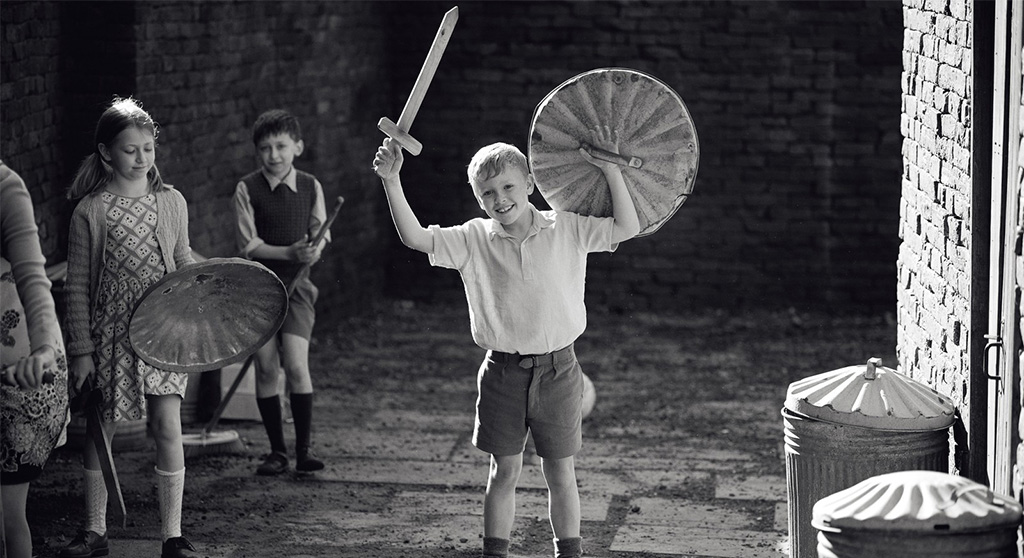 ‘Belfast’: In Ireland for the violence of the 1960s with time for schoolboy crushes and matinees

Kenneth Branagh’s nostalgic, semi-autobiographical twist on growing up during the Protestant-Catholic conflict of the late ’60s and ’70s – yes, one of England’s best living actors is Irish – is an arty yet intimate affair that gets lost some in the wistfulness of youth and bigger thematic constructs that never fully come together. Shot primarily in black and white by Haris Zambarloukos (“Thor,” “Locke”), “Belfast’ is a gorgeous film to drink in, no question. We begin with a color travelogue of Belfast today, then cut to 1969 in black and white as 9-year-old Buddy (Jude Hill), coming home from school, rounds a corner and ends up in the path of an anti-nationalist Protestant mob looking to torch the homes of Catholics who want to cut ties with England.

It’s a bold opener, with the threat of sudden violence smoldering in the corner of every frame, be it the increased presence of barbed-wire barriers lining the streets or a local ruffian who viciously cold-cocks a fellow Protestant for refusing to fall in with his thuggish operations. That said, “Belfast” is more about bridging divides than holding the line, and how a family holds itself together under such outside duress. Told through Buddy’s eyes, “Belfast” is a coming-of-age tale that leverages the lens of innocence much the same way – but not as effectively – as John Boorman’s heartfelt 1987 classic “Hope and Glory” (1987) chronicled a British lad growing up in World War II England. Many of the setups in “Belfast” ride the edge of the conflict, such as the shy, demurring Buddy, whose family is Protestant, getting a crush on Catherine, a pretty Catholic classmate (Olive Tennant), or the local organizer instigating those incursive acts of terror (Colin Morgan) putting pressure on Pa (Jamie Dornan) to sign up or else. It doesn’t help that Pa works in England and is hardly around, and when he is, Morgan’s brute is always lurking nearby. Not all is bleak and despair; some of the more touching moments come as Buddy seeks advice from his grandfather (Ciarán Hinds, “Munich”), who lives under the same cramped row-house roof and is forever applying saddle soap to equestrian gear he never puts to use. (Granny is played by Dame Judy Dench.)

Pa works in England and is hardly around; when he is, there’s a local organizer instigating those incursive acts of terror (Colin Morgan) who puts pressure on Pa (Jamie Dornan) to sign up or else. Given the chaos in the street and Pa’s work constraints, much of the pressure, domestic and otherwise, falls on Ma (Caitríona Balfe) who, like Pa, holds onto her morals and ethics regardless of what comes; in the wake of one riot,  a store gets looted and Buddy, encouraged by other kids, takes a few bars of candy – which has Ma dragging him through the throng and back to the store to return what he did not pay for.

If you’re wondering where Branagh’s passion for film originated, there are several scenes with the family at the local theater taking in such era classics as “The Man Who Shot Liberty Valance,” “One Million Years B.C.” “Chitty Chitty Bang Bang” and “High Noon.” That Gary Cooper classic foreshadows the mounting tensions between Pa and Morgan’s stalker, which culminate in a “Noon”-like showdown in the street. Dornan’s portrait of square-jawed resolve, however charismatic and admirable, becomes too much of a cape of righteousness without nuance or flaw. Similarly, Balfe casts a winning screen presence but her Ma feels too put-together and fashionable for the rough-and-tumble streets. Hill, who bears a heavy yoke for such a young thespian, is the film’s discovery. It’s amazing just how much vulnerability, confusion and desire Hill conveys in his saucer eyes and furrowed brow. I bet too Branagh’s a big Van Morrison fan; no fewer than seven of the Irish rocker’s ballads get cued up over the course of the film. “Belfast” is an adoring love letter that churns chaotic brutality into a fairytale.