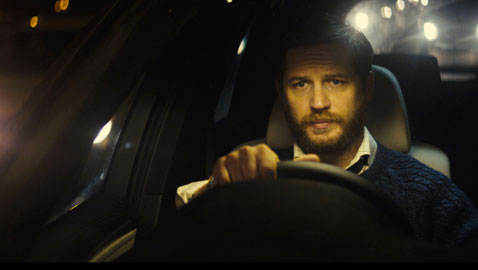 A man driving around in his car might not make for much of a movie, not unless he’s got a phalanx of baddies armed with uzis blasting away on his ass. That’s not the case in “Locke,” and thankfully so. What “Locke” has going for it is high stakes and Tom Hardy, the actor who has done everything from the violently outlandish “Bronson” to “Tinker Tailor Soldier Spy” and even played a malevolent cage fighter in “Warrior,” not to mention those two small films he did with Christopher Nolan “Inception” and who could forget his turn as Bane in “The Dark Knight Rises.” Hardy’s range and versatility has him on his way to becoming the bona fide A-list name from the U.K. that Jude Law never quite became. If there was any question, “Locke” cements it. 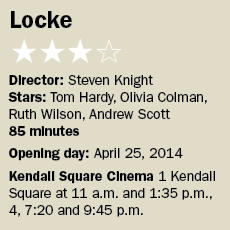 The premise is quite simple: A man gets in his car and drives for nearly 90 minutes in crisis management mode. Hardy’s Ivan Locke is a high-performing construction foreman building the biggest modern-day skyscraper in the London area, but panicked calls from a woman in a hospital needing his reassurance keep pouring in over his BMW’s Bluetooth system. He also uses the system, a platform for his calm control over things out of his reach and the driving plot device for the film, to let his most loyal know he won’t be there at 5 a.m. when hundreds of cement trucks roll in to pour the building’s foundation. This sets off a management shit storm, but Locke, ever calm and confident, defuses each mini-tempest with reason, explanation and solution. What’s not so easy are the calls from his wife, who is confused as to why he is driving through the night and not home watching the big soccer game with the boys.

The reason Locke is ostensibly ducking out on matters is a big MacGuffin. To say any more would be to cheat the film, but I can tell you, I never knew a pour of cement was so complicated, nor had I ever seen a builder so intimately involved in the process.

It’s written and directed by Steven Knight, known mainly for screenplays for “Easter Promises” and “Dirty Pretty Things,” and he gets this character study right behind the lens as well as on the page.

Even more amazing is the gorgeously stark cinematography by Haris Zambarloukos. The streak of lights and illumination and enveloping blackness of night is breathtaking, and as much a player in Locke’s lonely emotional journey as his Bluetooth. And not enough can be said of Hardy, pinned behind the wheel the whole time with the camera close on his face as he talks through sticky situations. It’s a tour de force performance seen more typically on stage than on the screen, and his nuance and inflection nail simple emotional ripples, especially when there’s anger masked behind his soothing words.

Shooting off into the unknown to atone is a brave choice not many would make. Locke risks a lot; Hardy and Knight may have risked more. The riches of their gamble shimmers in the cold dark night heading into London, guided by an cold electronic voice of one of Siri’s sisters. The subtle commentary on technology and being wired in is a daft mirror. Not all of “Locke” rings through, but what there is is very real and leaves much to reflect upon.