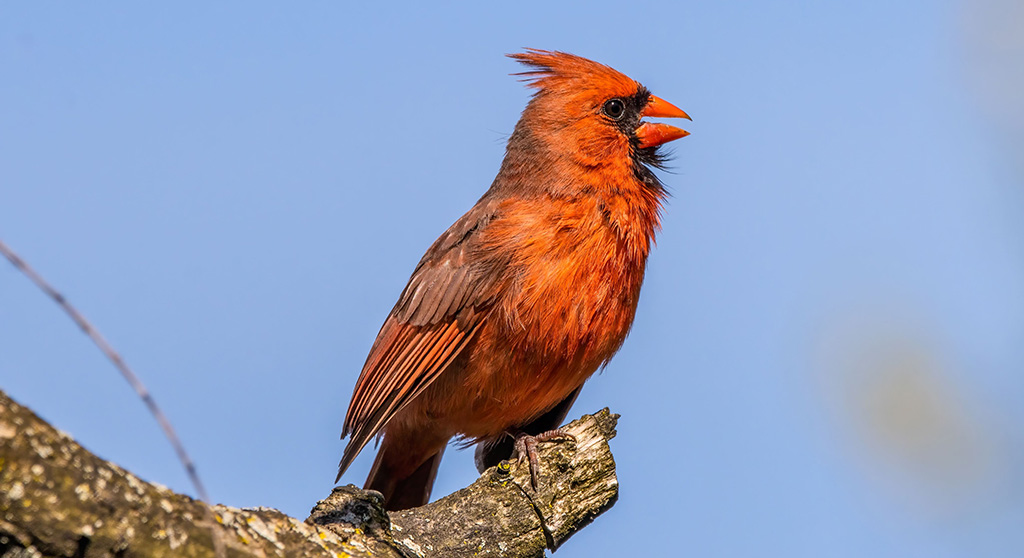 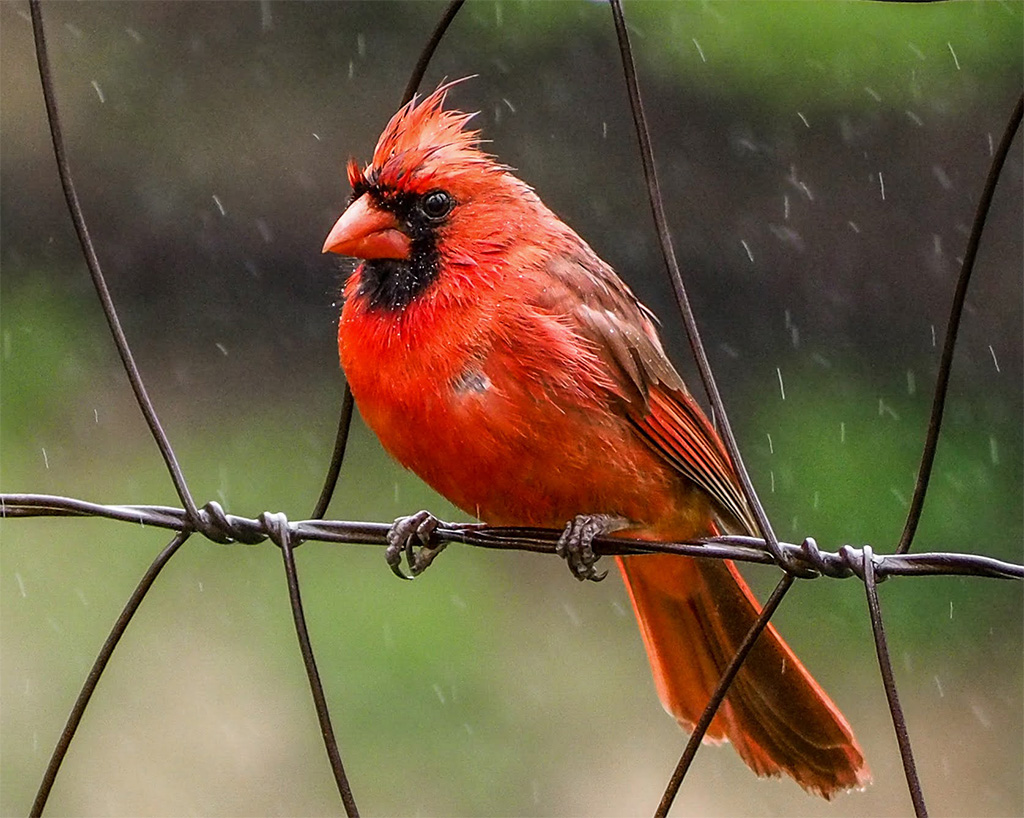 One summer many years ago, we found a brownish baby bird hopping around in our basement near the base of our chimney. The bird had a feather that stood up on its head like a cowlick. We did not know what to do with this tiny creature, but phoned around and were advised to put the bird in a box in a tree in our yard. We did this, and soon observed that the presumed parents (a male and female cardinal) did indeed respond to the youngster’s calls and began bringing food to the baby in the box. This little bird was quite nimble and soon was standing on a flap of the box. Hours later, it had jumped from the box, never to be seen by us again. I hope the fledgling was able to hide well while grounded, but the mortality rate for young cardinals at this age is high (as much as 42 percent). Staying in the box might have been more dangerous than leaving it, though. A predator merely had to watch the parents feeding the youngster to ascertain where the baby was. Once a baby cardinal hops out of the nest, it can move around on the ground and change its hiding place.

Watch another cardinal pair raise young nestlings until they too mysteriously disappear in this video.

Since young cardinal fledglings have wing feathers that are not fully grown, they mostly hop around on the ground pecking at things and chasing after their father, who feeds them. At this point, the mother cardinal stops caring for the fledglings and busies herself building a nest for the next brood. After the youngsters learn to forage and fly for themselves, they leave their father, who then also turns his attention to the next brood. Cardinals have two or more broods of young per year. 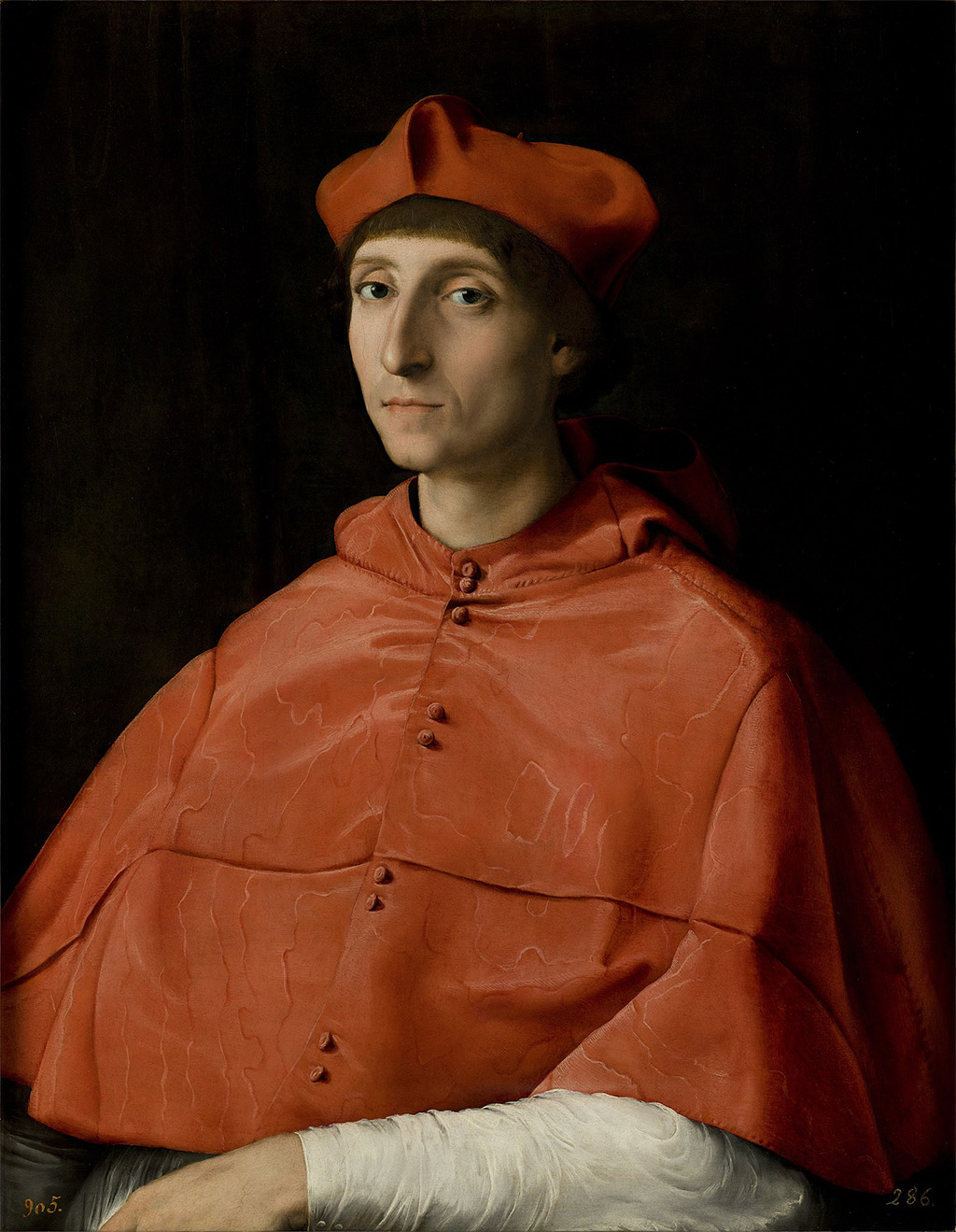 Early settlers in North America had never seen cardinals before, and referred to them simply as red-birds. But for some, the male’s bright red feathers made them think of Roman Catholic church officials, who wore similarly colored robes and caps. Thus, the name cardinal (Cardinalis cardinalis) was born. To this day, some collective nouns for a flock of cardinals are a conclave, Vatican or college of cardinals.

Northern cardinals are widely distributed in the East and not found in the West, where I grew up. When I moved East after college, I commented one day to a co-worker about a bright red bird I had seen, calling the bird an oriole. My co-worker thought I knew what I was talking about and said, “You are very fortunate to have spotted one. They aren’t often seen here this time of year.” 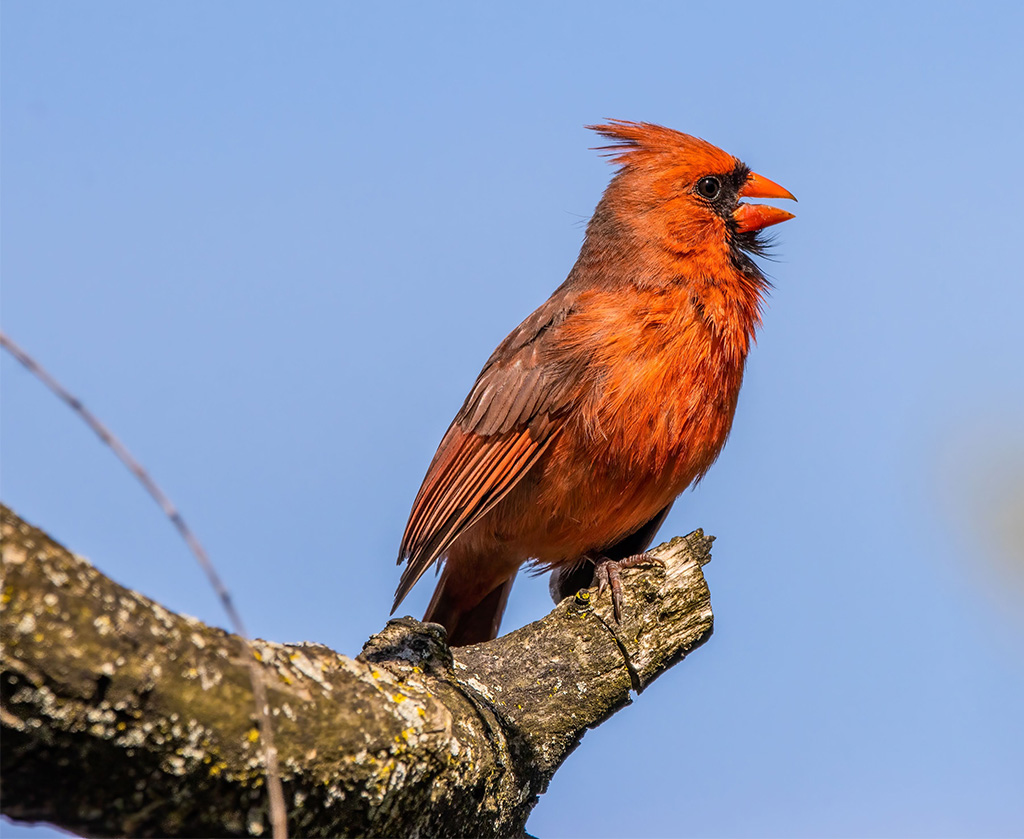 In the spring, the northern cardinal can be heard in backyards, parks and along the edges of woodlands. This one sings in North Cambridge in May. (Photo: Richard George)

Beginning to doubt myself, I said, “Maybe it wasn’t an oriole? What’s a bright red bird?”

She replied, “A cardinal?”

At this point, I did a bit of research and concluded that I had, indeed, seen a cardinal.

More than 100 years ago, cardinals were found mostly in the southeastern United States. Slowly they expanded their range northward. By 1895, cardinals were seen as far north as the Great Lakes. In 1898, a northern cardinal nest was found in Brookline – though it is thought an escaped caged bird may have created it. In 1958, the first true wild cardinal nest was reported in Massachusetts. Today, of course, cardinals are quite common in our region all year long. Cardinals are found in the eastern and central states, as well as southeast Canada and Mexico, Belize and Guatemala. Because of climate change and backyard bird feeders, the northern cardinal’s range in increasing. 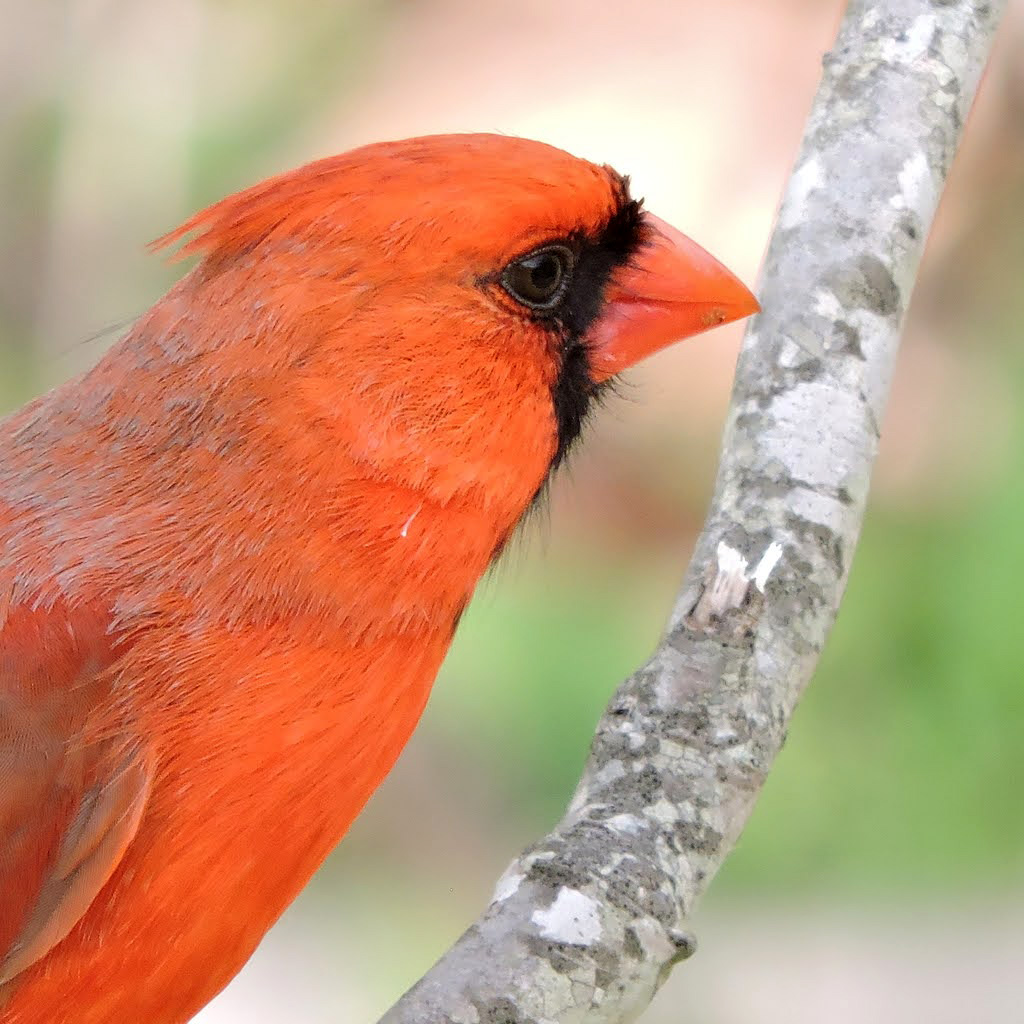 Cardinals have vivid orange beaks. This one was spotted along the Alewife Reservation in August. (Photo: Ann Schlesinger)

In about 1925, ornithologist Edward Howe Forbush wrote about these birds,

Cardinals are abundant in some of the extreme southern states, but are not common in the northernmost states. … They do not seem to be able to maintain themselves long in New England. There are many records of the species in this region, but the birds seem to be mere chance wanderers, staying with us for only a brief period, and then disappearing.

Nuttall reported cardinals in Massachusetts, as early as 1832: “A few stragglers even proceed as far to the north as Salem in Massachusetts.” But I have to wonder if the cardinals Forbush and others saw in New England were caged birds that had escaped or been released. 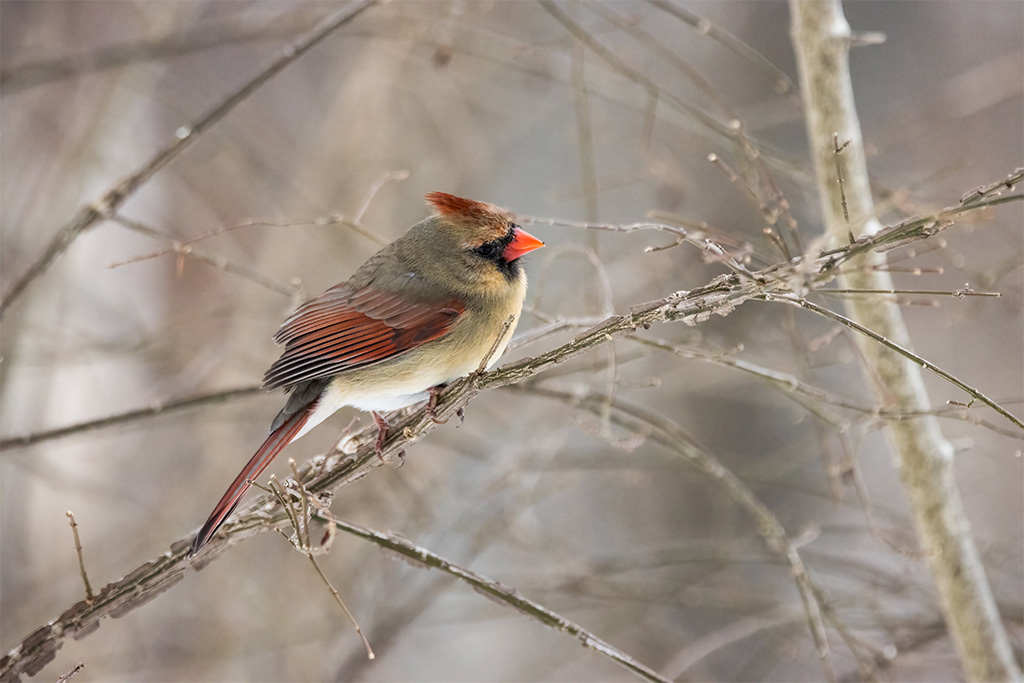 Female cardinals are pale brown with reddish tinges in the wings, tail and crest. Like the male, they have black feathers surrounding the beak. (Photo: Richard George)

In the 1800s, cardinals were highly prized as caged birds and for their red feathers, which were used to decorate hats. Trappers in southern states captured the birds and sold them to fanciers in northern states and in Europe (thousands were shipped to Europe). This practice ended in 1918 when the Migratory Bird Treaty Act disallowed the killing, capturing, selling, trading or transporting of most native birds in the United States.

In A Manual of Ornithology, Thomas Nuttall wrote of cardinals in 1832,

They are so easily domesticated immediately after being caught in trap cages, it is unnecessary to raise them from the nest. By this kind of unnatural confinement, the brilliant color of the male is found sometimes to fade until it becomes of a pale whitish red. They live, however, long in confinement, and an instance is known of one which had survived for 21 years. In the cage, they have not that variety of song which they exhibit in their native wilds.

The cardinal has ever been a favorite cage bird, and in some localities in the South great numbers have been trapped and sold into captivity. In times past it has suffered greatly also from persecution of millinery collectors. Despite legal enactments against the killing of birds for hat gear, even yet the practice has by no means ceased, and among other useful birds the cardinal still suffers to a greater or less degree. In the District of Columbia cardinals were noted on hats as late as 1906.

According to the U.S. Department of Agriculture in 1905, “Thousands of mockingbirds, cardinals, indigo birds and other bright-plumaged species were formerly trapped for sale in this country and abroad, and so assiduously did the bird trappers ply their vocation that in some localities these species were almost exterminated.” 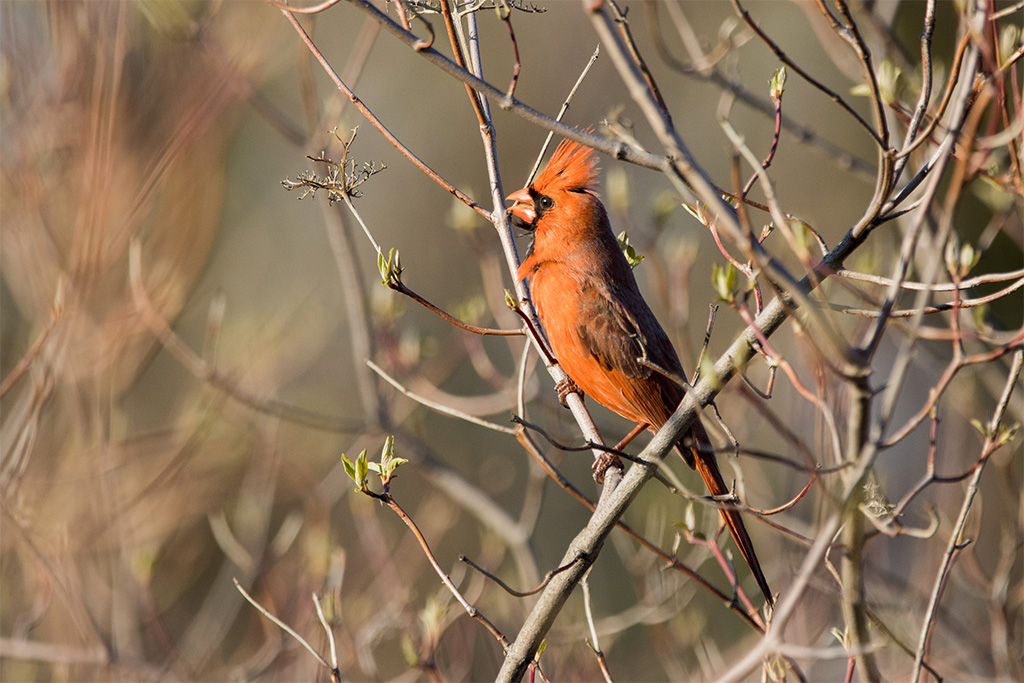 Nuttall went on to say of cardinals, “So highly were these birds esteemed for their melody, that … the Spaniards of Havana, in a time of public distress and scarcity, bought so many of these birds, with which a vessel was partly freighted, from Florida, that the sum expended, at 10 dollars apiece, amounted to no less than 18,000 dollars!” He goes on to say, “As cardinals were caged and sold in many countries, the trapping, handling and sale of these birds was in the aggregate an important business.”

Cardinals are grain- or seed-eating birds. They have beaks well adapted to cracking open seeds. Cardinals will also eat fruit and insects when available. Because of its flexible diet, cardinals do not need to migrate to find food and stay in one location year-round. Cardinals forage mostly while hopping along the ground looking for seeds, insects or berries. Cardinal parents feed their baby birds insects (mostly caterpillars) that they stuff into wide-open mouths. If a chick does not swallow the caterpillar at first, the adult will take it back and chew it some more before returning it to the chick’s gaping mouth. 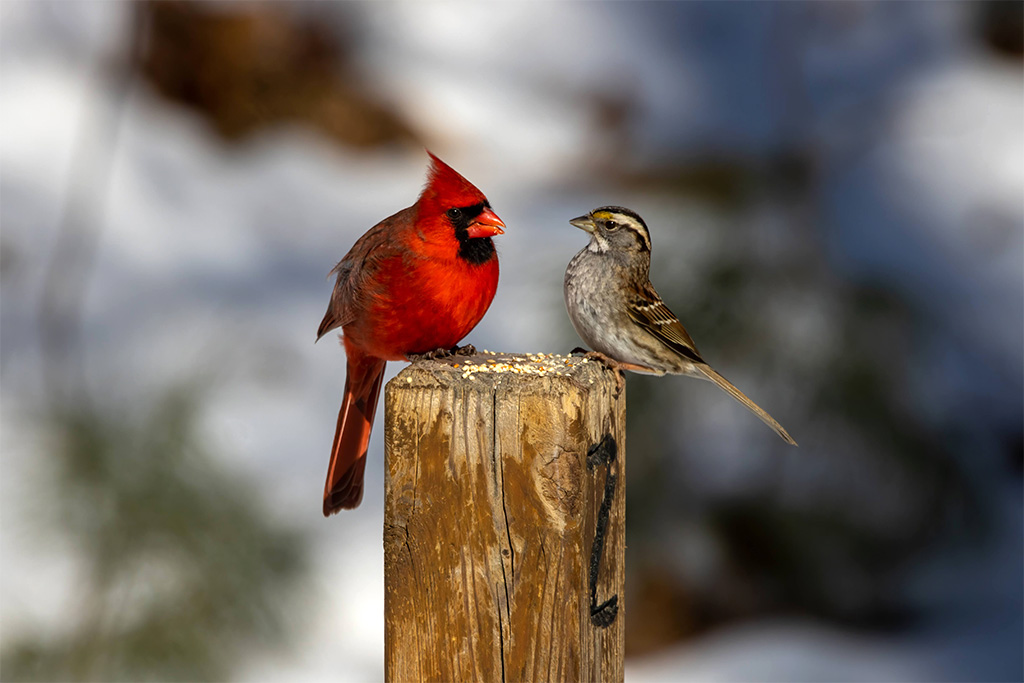 A young cardinal and a song sparrow interact near Alewife Brook in August 2020. (Photo: Richard George)

During breeding season, male cardinals are territorial and chase away other birds who could potentially harm the eggs or young. But even so, eggs and nestlings are highly vulnerable to predation: only about 15 percent to 37 percent of nests produce fledglings. Male cardinals will even attack their own reflection in the mistake belief that this is an interloper. Cardinal pairs are often monogamous and remain together year after year, but DNA fingerprinting reveals that 9 percent to 35 percent of young cardinals have paternity from other than the nesting male.

A human voice box produces only one sound at a time, but a cardinal’s voice box, called a syrinx, allows it to produce two notes at the same time. The left side of the syrinx produces lower-pitched notes; the right side, higher notes. Studies have shown that many songbird females listen closely to the song quality of males to determine which mates are most desirable. 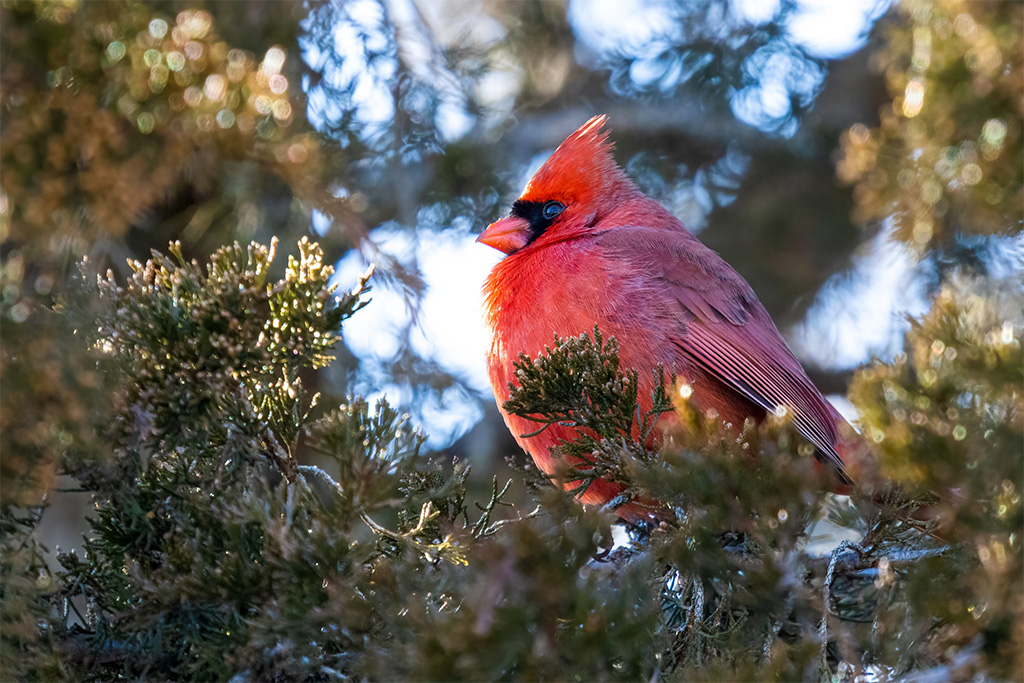 Cardinals live in Massachusetts year-round. This one was spotted in January. (Photo: Richard George)

Chickadees are little, but you wouldn’t know it from appetite for caterpillars and other insects
A BETTER

Starlings may have no real link to Shakespeare, but they have gone from hero to villain to victim
A BETTER