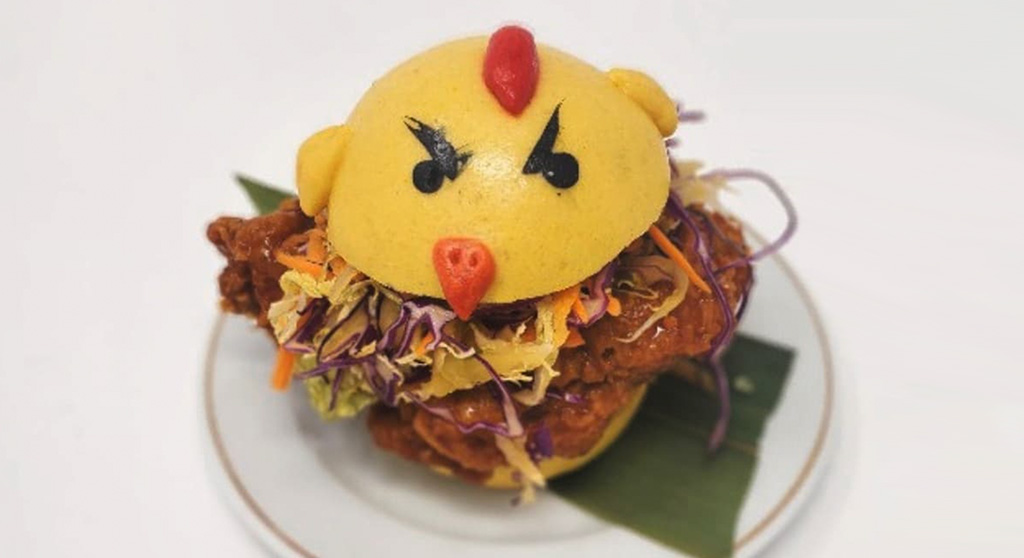 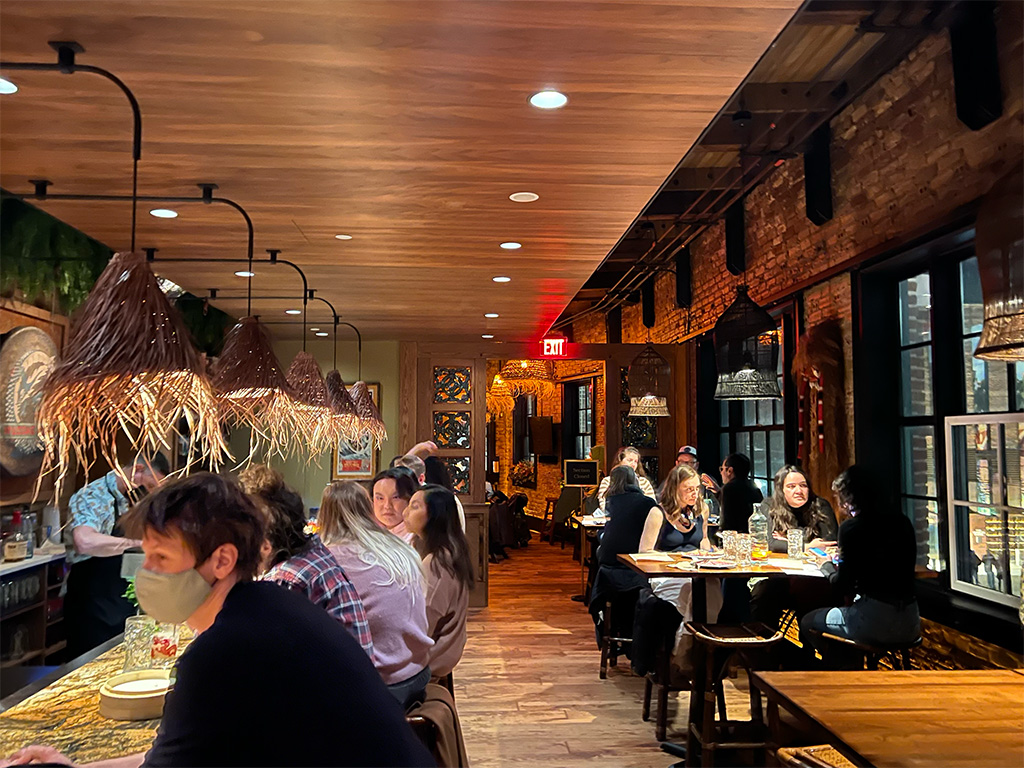 It wasn’t so long ago that restaurateur Garrett Harker transformed the Conductor’s Building – that elongated curio between Mount Auburn Street and the Charles Hotel in Harvard Square, next to the MBTA’s Bennett Alley bus depot – into the grand French eatery Les Sablons in 2017. The interior sparkled and the food delighted, but well before the pandemic, Sablons shuttered. Harker, of Branch Line in Watertown and the former Eastern Standard and Island Creek Oyster Bar hot spots in Boston’s Kenmore Square, closed some other ventures as well, but don’t worry: He’s back on the way up, with a slew of dining spots coming to the Fenway area. Enter former Menton cook Jason Doo and Tom Brush of Felipe’s Taqueria up the way in Brattle Square, who have turned the place into a tiki bar. Gone are the trés French accents (the Les Sablons sign still hangs over Bennett Street, but you enter Wusong from the Mount Auburn side), replaced with homey thatch and bamboo. It’s a Chinese luau, if you will. I went on a Tuesday night and the place was packed during peak dining hours, yet a ghost town when I left. I was told that Tuesdays were as hopping as the weekends.

Doo and Brush held a soft opening in January and look to expand the offerings as they settle in. Wusong’s menu at the moment is limited, but enticing. The star – which I’ve yet to try it, but seems like a must to earn those Wusong tiki wings – has to be the Spam musubi, with a slab of that Monty Python-embraced processed meat wrapped in crisp seaweed and served atop a block of sushi rice with a slice of Japanese sweet egg omelet in between. The other must-haves (that I did have) are the chicken and pork bao buns. The kick is they come with a little pig or chicken face sculpted out of the fluffy bun top, with food dye painted on as eyes and noses. The le poulet version, brined and crispy-fried Southern style with a chipotle aioli sauce, Sriracha dressing and pickled slaw tucked inside that decorated bao, is a juicy, savory mess that makes you wonder if you shouldn’t have ordered two. But fear not, I had the house fried rice on the way, which was pleasingly one of the most non-fried fried rice dishes I’ve ever had. Mixed among the fluffy loose grains were Chinese sausage, fried garlic, onions, peas, tomago (egg), meat-floss-style rousong pork, shallots, spam and scallions. I added shrimp and pineapple and, as my server suggested, topped it with some chili oil to create a fantastic olio of flavors. The dish was pretty light for fried rice, and quite affirming as well. There’s also a General Gao’s Chicken, done tempura-fried-popcorn style with a Sichuan sauce and crispy basil; Dan Dan Ragu, Wusong’s untraditional take on dun dun sesame noodles; a scallion pancake roll-up; and more traditional staples such as Peking ravioli and summer rolls. 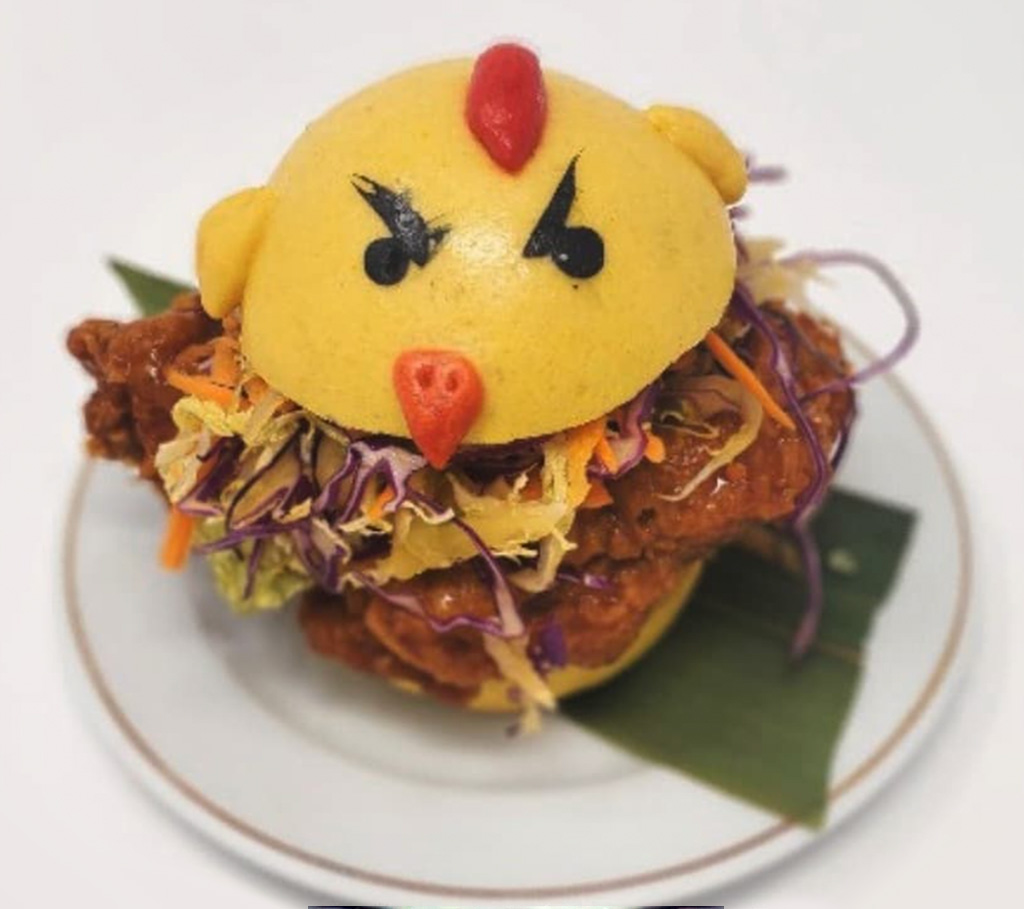 The buns on Wusong Road’s chicken and pork bao are decorated depending on which you order. (Photo: Wusong Road via Instagram)

Of course Wusong has a robust drink menu of tiki musts: a scorpion bowl (with the Hong Kong nearby, Harvard Square now has two spots for multi-straw bowl sipping), mai tai and zombie. I had a refreshing gin and citrus juice concoction that came with fruit and a little umbrella and is gone from the menu, as I am told the slate of drinks is being revamped.  Downstairs, diners get to make their own Hong Kong rice bowls, and Wusong has a roasted duck you have to order a day in advance that, like those scorpion bowls, is a two-or-more dining occasion. Duck to me is treat, and I’m sure I’ll be putting in for one in the near future.

Aside from the rice bowls, the duck and everything else mentioned here – even the tiki drinks – can be ordered to-go. (There is a slight supply shortage on the ducks, but more are on the way.) If I had one druther for Wusong – and it’s one I have with many restaurants in these days of online ordering – it’s that improves its online ordering. It’s hard to tell now what’s being offered via Wusong’s only menu on the Toast system, where there are few pictures. Yeah, there’s Instagram and other social media to explore when researching where and what to eat, but restaurants looking to entice the epicurious should let their websites tell the story, not make the hungry masses bounce around wondering.