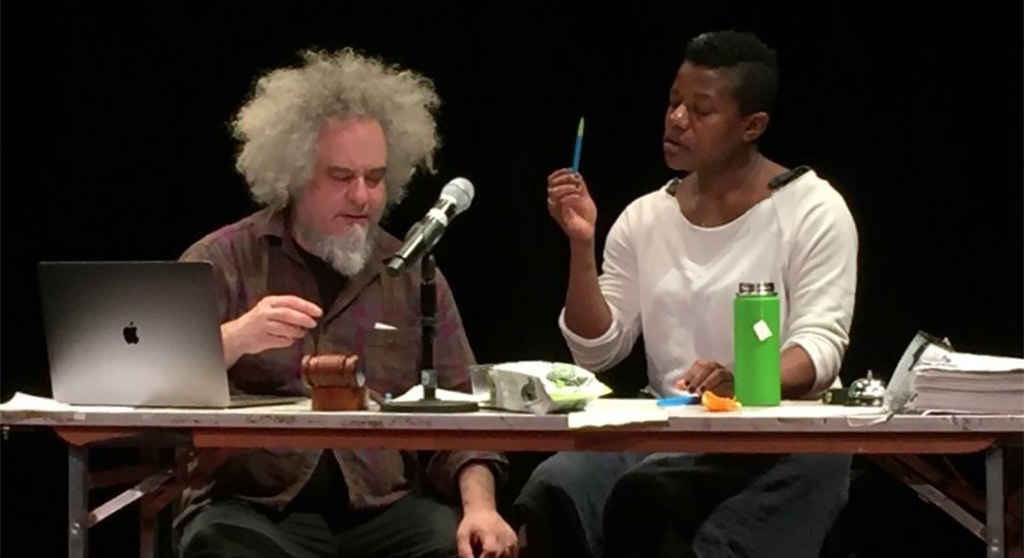 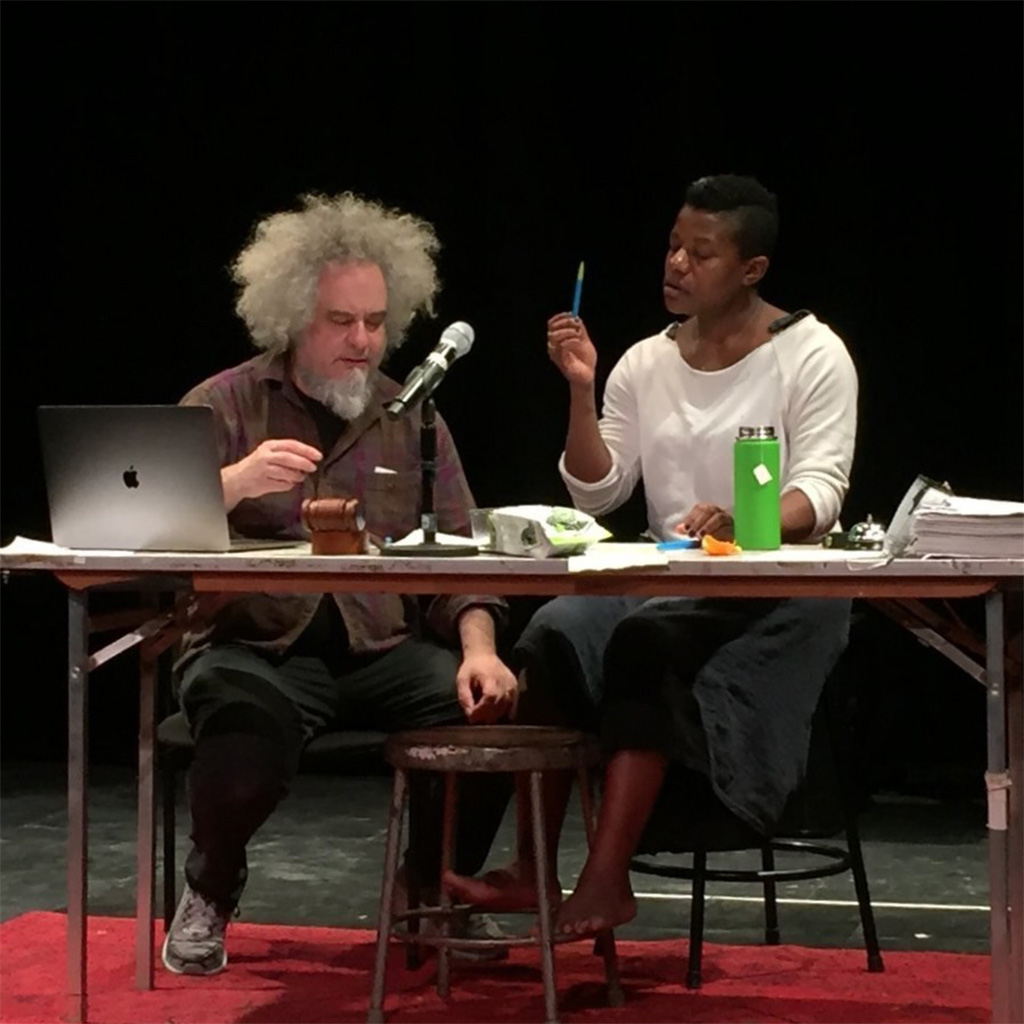 The scene is the inside of the senate chamber of a global governing body, in the future. The character Mr. Majority introduces an “End of Ocean Bill” that would shrink the Earth’s oceans into seven manageable lagoons. Played by the same actor, the Ocean itself comes to life, ready to speak in its own defense. This is the premise of “Ocean Filibuster,” a music theater production with songs by composer Sxip Shirey.

“The theme is very dear to my heart. I feel everyday grief over the environment,” Shirey said. “I have a two-and-a-half-year-old son and have fear for what world we’re giving him. You can talk around it all you want, but it’s a total failure of a species.”

Shirey said that “Ocean Filibuster” is full of surprises, combining video, standup, music, myth and more. While he prefers not to think of the show’s compositions as broken down by genre, the songs span a range of styles, including hip-hop, R&B, folk, rock, songwriting and electronic – all sung by Jennifer Kidwell, who plays Mr. Majority and the Ocean, and a six-person choir. 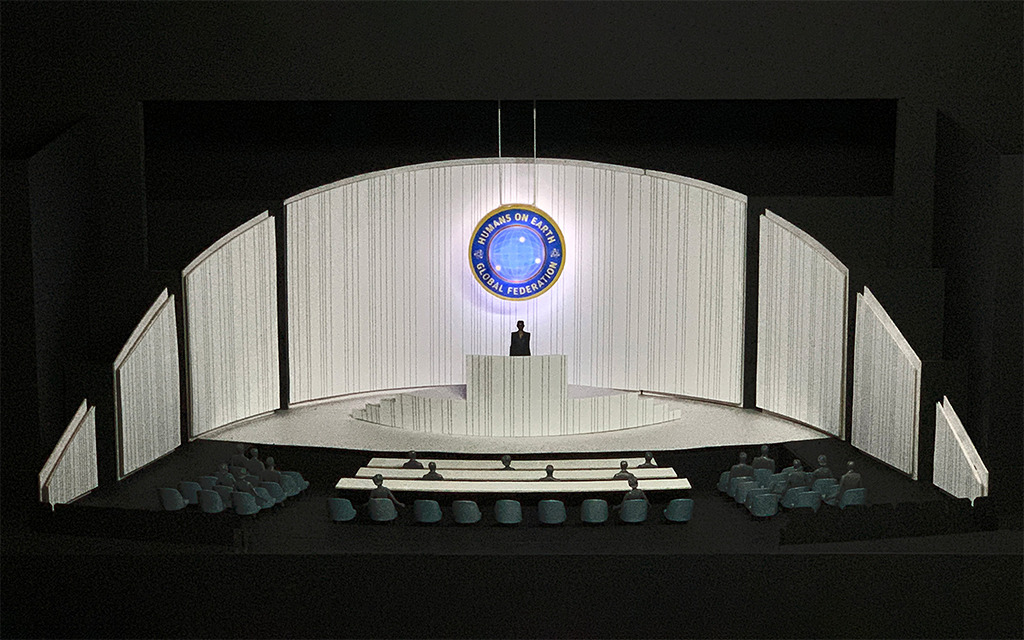 A set model for “Ocean Filibuster” shows rows of “Senate seats” that will go to some audience members. (Photo: Jian Jung)

A song should be easy for the audience to digest and memorable, and it should serve the show, Shirey said. “Because I grew up reading a lot of science fiction and studying physics, I think of songwriting as emotional equations. You set up something, and then you land something. What I’m trying to do with Lisa’s writing is find those emotional equations in the writing and then bring them out,” he said, referring to playwright Lisa D’Amour.

To write for a small group, Shirey said he used techniques that maximize what a choir can do, such as phrase passing, tonal clusters and hocketing, in which singers trade off vocalizations rapidly. But the techniques are service of simplicity. “A lot of what I do is simple and complex at the same time,” he said. “If you can write a compelling, simple tune – no big chord changes, modal – that grabs you by the heart, to me, that’s a big thing.”

Beauty out of facts 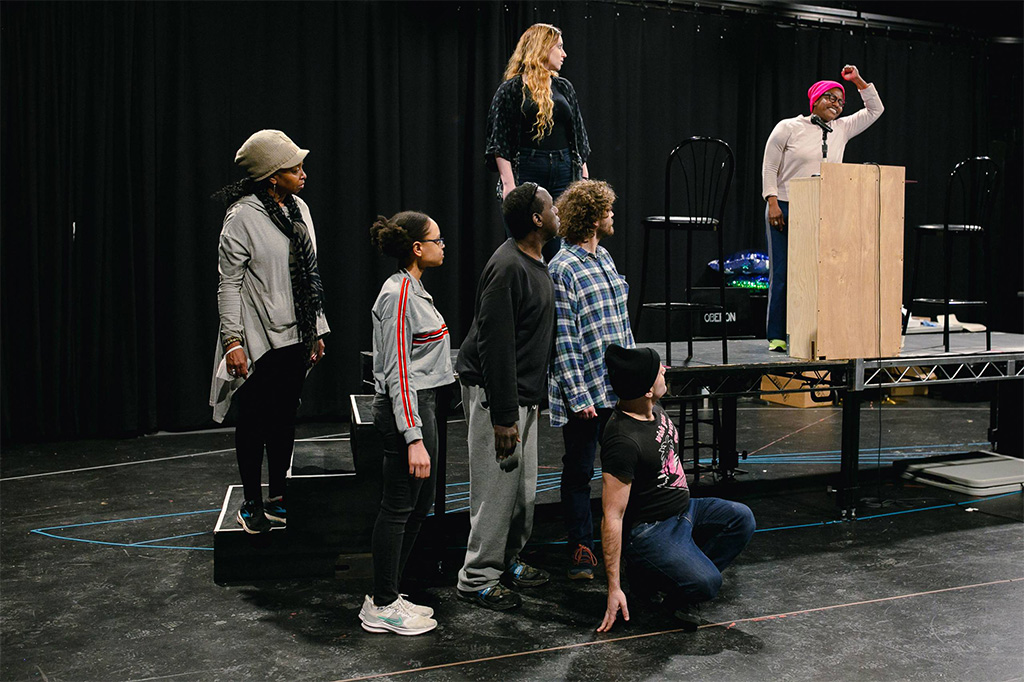 Shirey explained the inspiration behind some of the “Ocean Filibuster” songs, highlighting moments theatergoers can look for:

“Radiolaria”: The Ocean asks people to find beauty and wonder in the nature around them. Part of the inspiration for this piece came when members of the creative team asked scientists what they would want to convey about the ocean, and their answer was: That it’s beautiful. “And that’s enough,” Shirey said. To compose “Radiolaria,” Shirey researched microscopic, marine-dwelling organisms, finding “that these scientific names for these creatures are beautiful. The details of their lives are beautiful.” He quoted some lyrics:

The Pyrocystis can be bioluminescent. They look like tiny crescent moons.

Radiolaria, related to amoebas, they live in glasslike shells and float on little needles.

“That’s beautiful, and I was just reading the facts,” Shirey said. “I look at this list of things, and I start reaching in and finding the rhymes and melodies, the enjoyable phonetics.The goal with that song is to enjoy singing the words.”

“This Land”: Mr. Majority’s patriotic fervor is evoked as he tries to sell the idea of shrinking the Earth’s oceans. The character uses the “language of gentrification” and believes the stuff he’s trying to sell, Shirey said in a public, behind-the-scenes conversation.

“Time”: Time is a human construct and, to the Ocean, not really linear, Shirey said, citing lyrics that capture the concept: “Because 10,000 years doesn’t mean anything to a sponge.”

At the very heart of “Ocean Filibuster” are the notions that human beings are just a delicate part of the world’s ecosystem, that this environment is the only one that we have, and that we must treasure it.

“Under the hood of it, what squishy, fragile, volatile things we are,” Shirey said. “There’s a lot of artifice around us. We live in artifice. But we’re monkeys with machine guns, basically. We’ve extended our abilities, and we even have intellectual technologies. We can talk about our feelings in really rich ways, now. But still, once you get a mass of us, we do dumb things. Also, human beings, in the grand scheme of things – we’re just another species on the planet. Being an apex predator, you’re at the top of a tower that can fall easily. You’re in a fragile place. If human beings destroy everything, there will still be life. There’s life in the heat vents of the ocean. We’re not so important.”

“Ocean Filibuster” was commissioned and developed through a collaboration with the Harvard University Center for the Environment. As directed by Katie Pearl, the production has reconfigured the Loeb Drama Center auditorium to include “Senate Seats” that move a few audience members up close to the showdown at long tables – as though they are the politicians who’ll vote on the “End of Ocean Bill” being debated by Mr. Majority and the Ocean.