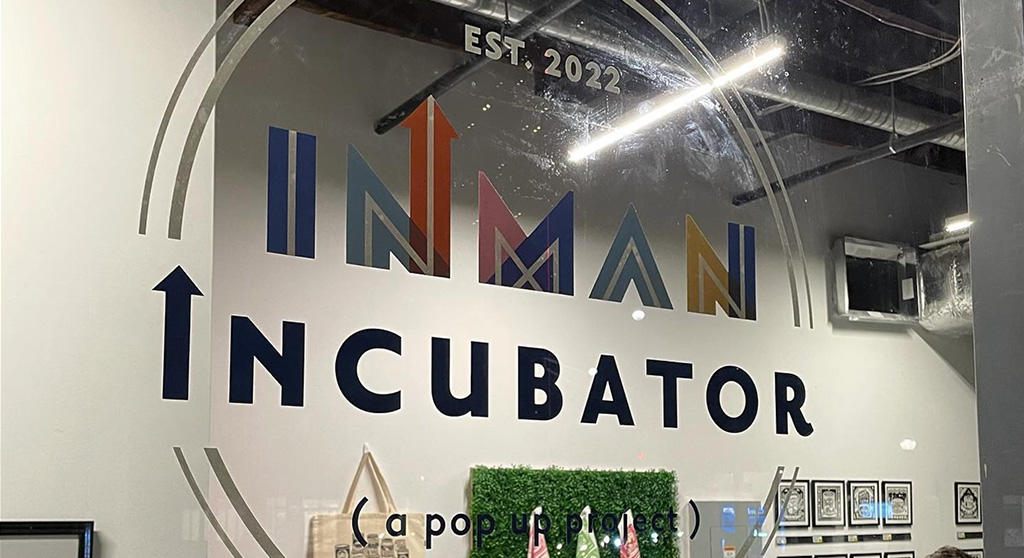 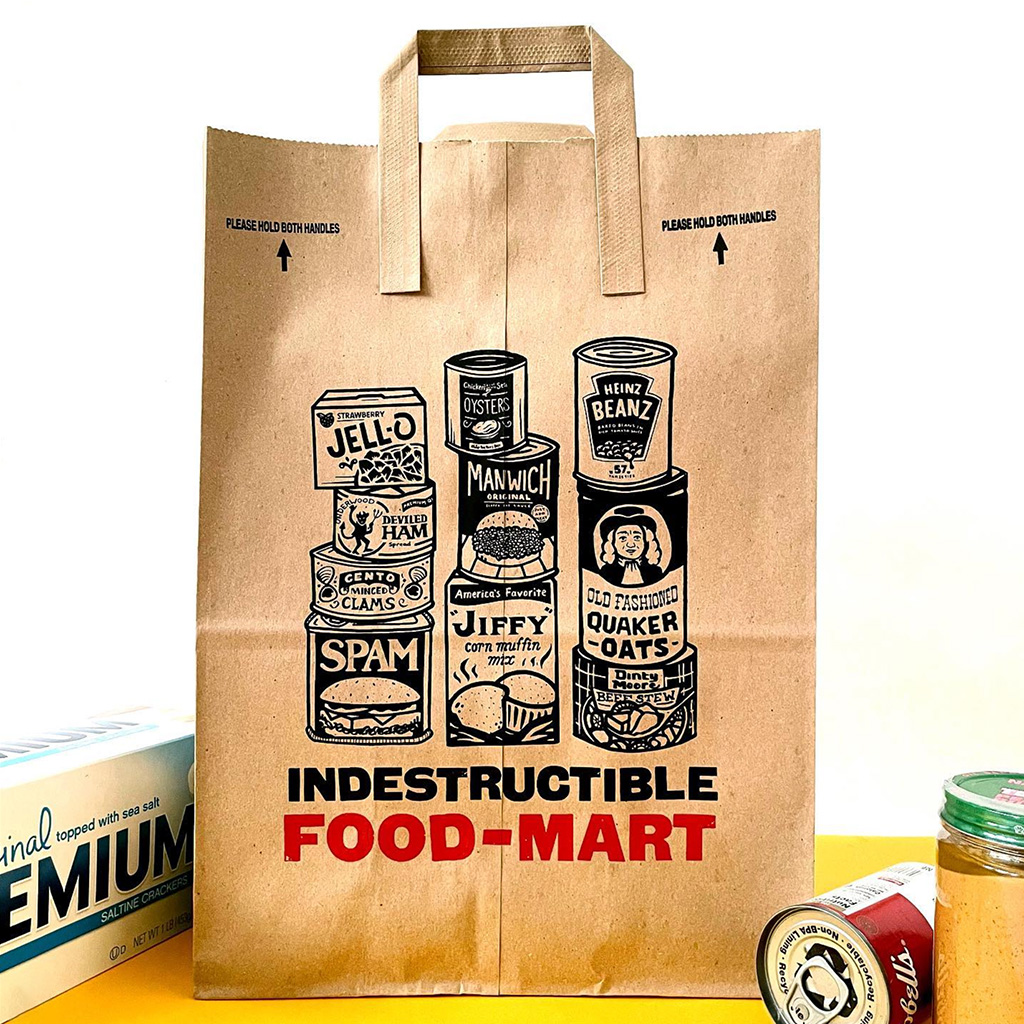 A rotating pop-up storefront called the Inman Incubator opened Friday at 1385 Cambridge St. in the heart of Inman Square, with its first local maker set up for a month of sales: Indestructible Food, with a series of screen prints by Sarah Dudek that turn supermarket staples into wall-worthy art.

“It’s popular to disparage packaged foods,” Dudek said, referring to products she illustrates such as Fluff marshmallow spread, Spam canned meat and Kraft macaroni and cheese. But she also finds them fascinating. “This is food that is engineered to persist. On shelves, and in pantries, but also in memory.”

The project – which includes 48-page booklets of the art with texts ripe with fascinating histories – looks at “how these foods spread, and why they become traditions,” Dude said. “Indestructible Foods sit at the crossroads of nutrition, science, advertising and flavor, which is a neat place to be.”

The Inman Incubator also sits at an intersection: It consists of 190 square feet carved out of Commonwealth Alternative Care, a medical marijuana dispensary set to open this year on a totally redesigned Inman Square. The small retail space was developed to help the company maintain an active storefront separate from its normal cannabis operations, which have strict regulations on outward appearances, said Jason Alves, executive director of the East Cambridge Business Association. “This is a space the community advocated for,” Alves said, crediting the company for its commitment to the solution. “It will be a great asset in the square, especially adjacent to the new plaza.” 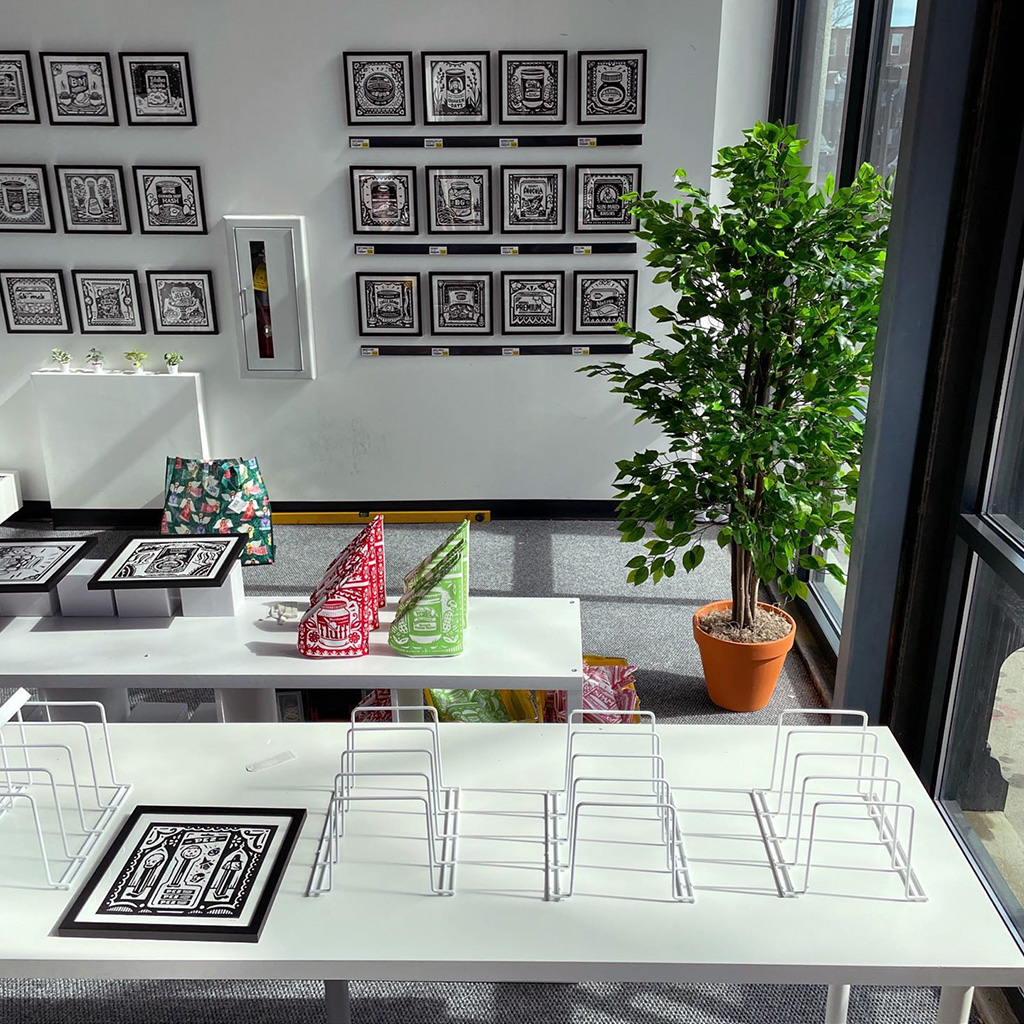 There are no set dates for the opening of the dispensary, though that could come within the next couple of months, or end of construction on the plaza redesign, Alves said. The plaza is expected to be complete this summer – delayed from the spring of 2021 because of issues related to the Covid pandemic, according to the city. The $5 millon project was approved by the City Council in October 2018.

The space is expected to last throughout the year as a partnership between the company; business association; and the Gather Here sewing studio, fabric and yarn shop and community space run by Virginia Johnson, an association board member.

Johnson is curating the makers coming to the Inman Incubator, with Jillian Audrey’s Homeslice Shop – handmade home decor, gifts, art and books by women – coming April 4 and two shops sharing the space starting May 6: the jeweler Sculpture to Wear and Hacker Creations, an art studio that transforms dismantled computer hardware into sculptural collage.

“Our hope for this space is that it provides exposure to the talented, independent artists and makers that we have in the community, and to support women- and minority-owned small businesses that are exploring what it means to operate bricks-and-mortar retail,” Johnson said. “This is a celebration of art and all things handcrafted, and we are excited for our neighbors to stop by and support these local artisans.”

Aside from being able to shop local, handcrafted goods in one place, the Inman Incubator invites the community to meet and converse with the person behind their purchase, Alves said.

The Inman Incubator is also supported by the City of Cambridge’s Small Business Challenge Grant.