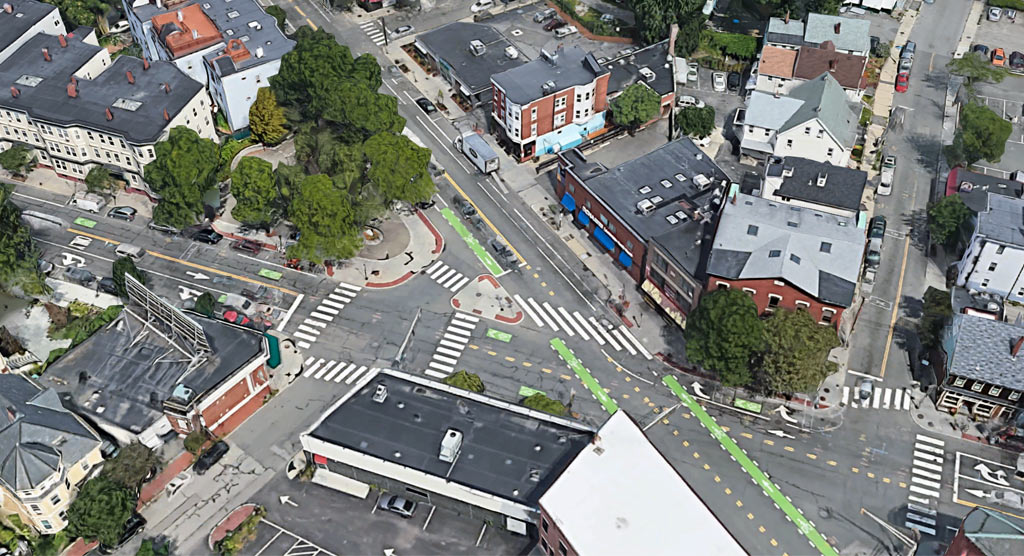 A redesign for Inman Square got a $5 million appropriation Monday from the City Council. (Image: Google)

A plan to redesign chaotic Inman Square won a $5 million appropriation Monday on a 6-3 vote from the City Council.

The changes were debated and opposed to the end, represented by more than a half-dozen residents who showed up for public comment to say the plan to bend Hampshire Street – turning the peculiarly elongated and complex square into two intersections but dividing Vellucci Plaza – was overly complicated, unnecessary without trying simpler fixes first and even made the intersection more dangerous. Councillor Craig Kelley had filed a last-minute communication explaining his objections.

E. Denise Simmons joined Kelley as a “no” by saying she hadn’t been convinced by the safety of the city’s design, believed it would hurt small business through the elimination of 23 parking spaces and doubted the city had a strong enough approach to bolster the square’s businesses through 18 to 24 months of construction that might send customers off to the competition.

The final vote against was by Tim Toomey, who has been a skeptic on the cost of the project, shown Monday to have risen to at least $7 million from a $6 million estimate given in the past. Aware of the issue from Toomey and public speakers, Mayor Marc McGovern took a moment with the city manager during the meeting to assure residents that the project was not going to surge to, say, $12 million and “has always been in this ballpark.”

City staff had indeed been saying $6 million as a total, with $4 million coming from the city’s free cash and $2 million from bond sales for capital projects, and “we are are a million dollars above what we stated the last time. But we did say there was a chance that could happen,” City Manager Louis A. DePasquale said. “That’s making it a better project, and that’s money well spent.”

“I don’t want you to just throw money out the window, but if you think there are things we need to do to make this even better and that’s going to cost a little more money, then I want the best possible outcome,” he told DePasquale. “I don’t want us to say ‘Well, we could make this even safer, but we’re not going to because we don’t want to ask for another million bucks.’”

Residents’ complaints that criticisms and good alternate plans hadn’t been considered were rejected by city staff and councillors, with McGovern pointing to the dozens of group and private meetings held about the redesign and Joseph Barr, director of the city’s Traffic, Parking & Transportation Department, saying the process – which began with a council order in June 2014, before the death of bicyclist Amanda Phillips in June 2016 – had included “several different options that were considered very seriously” and there were several times his department had taken “steps back and reevaluated things.”

Quinton Zondervan said he met with city staff to express his concerns before joining the council in January and felt he’d been listened to as a resident; another first-term councillor, Sumbul Siddiqui, said she too had been “digging deep to find a conspiracy [but] have come to trust that we are doing the right thing.”

Alanna Mallon, noting she is the only councillor who lives in Inman Square, walked a finer line, saying she shared the concerns of her neighbors but believed when city staffers said their minds remained open on the design of the future plaza. That process begins with a community meeting to be held from 6:30 to 8:30 p.m. Oct. 24 in the gymnasium of the Cambridgeport School, 89 Elm St.

Ways to keep small business intact during construction also needed honing, and there were several concerns and suggestions raised. “We are committed to making this work,” DePasquale said. “We are in this with the business community.”

Among other steps the city planned to take to minimize the damage to small business, city engineer Kathy Watkins said, is a contract agreement with the construction company hired that its workers cannot take up the precious few parking spots in the area with their own vehicles – they will have to come in by a company shuttle or by other means.

Construction is expected to start in April and to be done as early as autumn in 2020 or as late as spring of 2021.

The number of residents appearing to protest the redesign was down markedly from past meetings, but they outnumbered the lone member of the public who showed up to endorse the project and urge councillors’ support. Despite strong opposition from some in Inman Square, the mayor reminded the room, the council has also heard from people throughout Mid-Cambridge who supported the project.