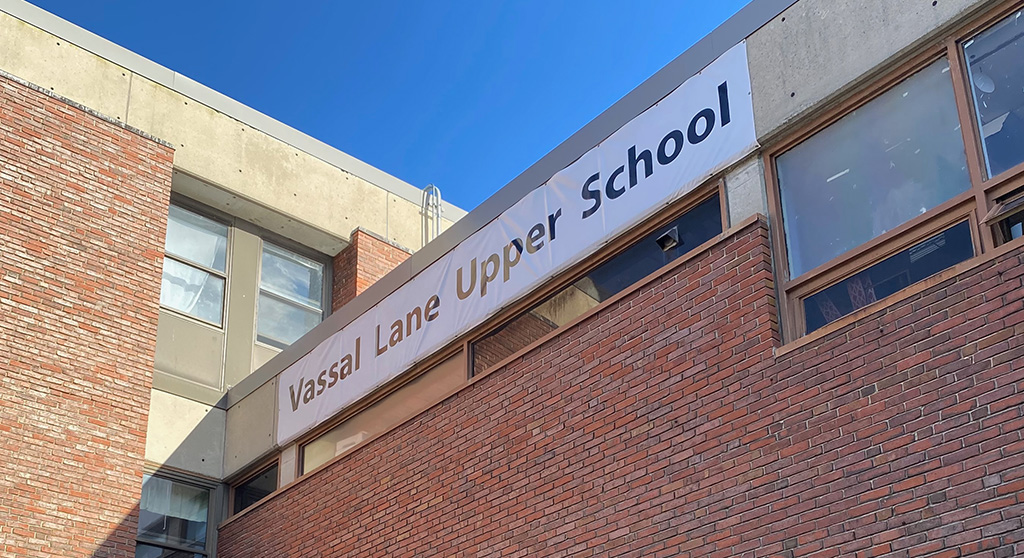 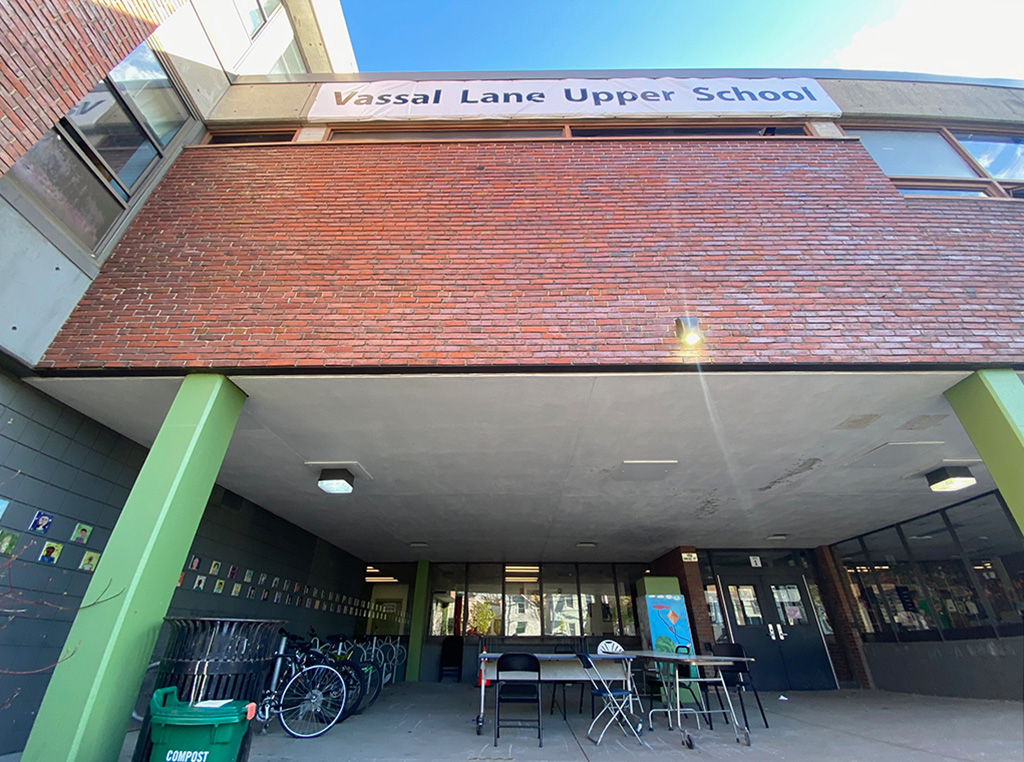 The Vassal Lane Upper School, temporarily in East Cambridge, has been identified as a trouble spot for bullying of trans kids. (Photo: Marc Levy)

The harassment of trans and other LGBTQIA+ students in the district has increased dramatically this school year, say parents and school officials, but the system for reporting incidents may have kept official numbers low – and neither the city nor state tracks those numbers anyway.

This is changing: the district announced April 13 that after months of planning and student engagement, on Monday it launches an incident reporting system called Speakfully.

The system will allow staff, students and caregivers to report any situation anonymously that is “making them feel unsafe or is an area of concern for them.” It will be hosted outside of the district to ensure confidentiality.

The arrival of Speakfully was first reported by The Register-Forum, the student newspaper at the Cambridge Rindge and Latin School, which linked it primarily to years of complaints of sexual harassment. “We, and the district, do expect the number of reports to increase within the near future,” student Morgan Nerich told the paper. “It is actually a good thing because that means the new system works.”

Hints along the paper trail

An email from superintendent Victoria Greer and Mayor Sumbul Siddiqui to the community March 29 referred to “recent incidents involving culturally and racially insensitive graffiti at the high school and transphobic behaviors at some of our schools” and stressed that “this kind of egregious behavior will not be tolerated in any of our schools, and students who participate in it will be held accountable and disciplined appropriately.”

“I’m hearing from families that their children aren’t feeling safe or comfortable at school,” School Committee vice chair Rachel Weinstein said. “Coming out, no matter what age, is a really hard thing to do, and in middle school, when students are not as kind as they were before the pandemic, and not used to being in a community, is scary and not always received with the affirmation and celebration that it should be.”

While LGBTQIA+ bullying has happened – and may be ongoing – at several schools, the Vassal Lane Upper School was identified by the district as a trouble spot.

Until Monday, district processes encouraged students and caregivers to report incidents to any school staff member, who would notify the principal or head of school. An investigation would be aided by members of the superintendent’s cabinet as needed. School district officials said it was important to note that Speakfully does not replace the ability of any member of the school community to initiate a complaint verbally with a principal or other Cambridge Public Schools staff member.

That investigation, though, would “include an interview with the target, the aggressor, caregivers of both students and any witnesses to the incident,” said Sujuta Wycoff, spokeswoman for the district. “Our students, in particular, have shared that the lack of anonymity in our existing reporting structure and a sense of distrust has discouraged them from reporting concerning incidents.”

Neither adults nor students wanted to be quoted by name in this story because they are afraid of retaliation by student bullies.

The district has responded to a public records request for reports or statistics regarding LBGTQIA+ incidents by saying “the city does not possess documentation responsive to your request,” but that the district reports incidents to the state’s Attorney General’s Office of Civil Rights.

That office said it “takes seriously any complaint” of bullying or discrimination, and reviews each “to determine the best course of action.” Still, it does “not specifically track these types of complaints” and suggested submitting an additional public records request for incident reports, which may include data on the type of discrimination.

It may be impossible to determine the type and level of harassment endured by students. The district reports incidents to the state, but “records or data tracking of bullying and harassment are not tracked/parsed by gender identity,” Wycoff said. “The state also does not collect this level of data.”

Day of silence led to bullying

A student organization at VLUS held a day of silence in December in response to some homophobic and transphobic bullying. An adult associated with the school said that while it seemed like a positive event, some students who supported it became the target of bullies.

School leaders took the situation seriously and suspended a student, but the process took too long and the bullying hasn’t stopped, the adult said.

“A lot of kids explore their pronouns, sexual identity and gender, and they’re being targeted by a very small group of loud and hateful and hurtful students,” the adult said. “When it comes to hate speech, these children are being bullied and harassed and made to feel threatened in school. It’s not even safe to ride the bus.” 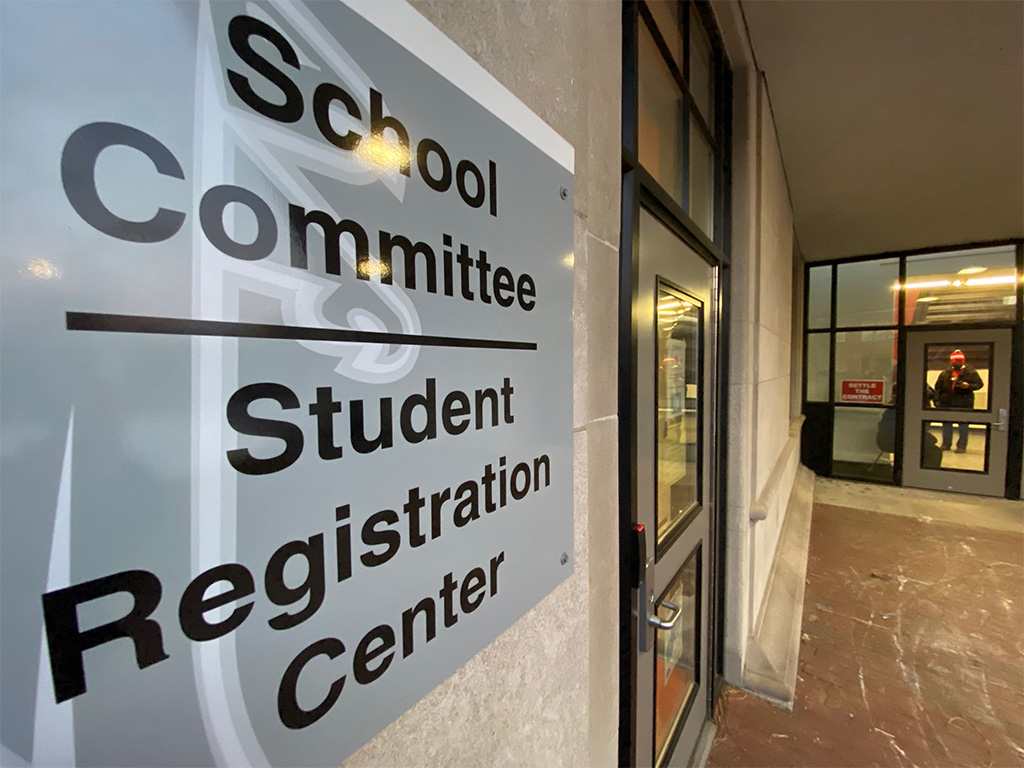 Students who are bullied may request a transfer to another district school through the Student Registration Center. (Photo: Marc Levy)

After students endured 18 months of social isolation and emotional regression as a result of the coronavirus pandemic, teachers were “not prepared for the level of trauma and dysfunction in many students when they returned to school,” said a second adult aware of the situation. “They started the year in a therapeutic [mode], but what the students needed was consistency, boundaries and rules. It didn’t backfire because the school did anything wrong, but because the teachers weren’t trained to deal with this.”

An option available to any student who is bullied is to request a transfer to another district school by submitting a hardship appeal form through the Student Registration Center. Transfer requests from LGBTQIA+ students are placed at the top of the priority lists and can be implemented within days, Wycoff said.

Leadership at Vassal Lane, with help from the district Office of Equity, Inclusion and Belonging, has been “engaged with students and families for several months, creating spaces for conversations, sharing resources and providing transparent information,” wrote Wycoff.

This includes listening sessions with LGBTQIA+ students, caregivers and members of the Gender and Sexuality Alliance, and professional development sessions for all staff on what to do when bullying is heard or seen, she said.

It also included “working intensely with those small number of students struggling to live the school’s core values that embody school being a place where everyone can be their full and joyful selves,” Wycoff said.

The district is discussing “how to expand the professional development and support VLUS staff have received” to other district staff, Wycoff said, including bus drivers and monitors. Some at Vassal Lane hope to establish a districtwide support and advocacy organization for families with LGBTQIA+ members, an adult associated with the school said.

Weinstein said that the mayor, School Committee and district staff have taken the issue of bullying seriously and with a sense of urgency, adding funding to the proposed district budget and working with the Title IX Aurelia Advocates, a student-rights organization born out of sexual misconduct complaints at the high school, to clarify LGBTQIA+ protections.

The district says it provides “learning for all educators on LGBTQ+ affirming and inclusive practices during staff meetings” and offers two courses to district educators that discuss supporting those students. Cambridge Education Association president Dan Monahan said the current training is “often ineffective or inadequate.”

“There should be different training for different educators depending on their understanding of LGBTQIA+ issues,” Monahan said. “Some are extremely knowledgeable and some know very little.” The most knowledgeable could review and improve the training, with compensation, he said.

Monahan said he was not aware of training to watch for retaliatory behavior after an incident is reported. “This is a huge issue,” he said. “There are so many things we can do better, but this needs to be done consistently and effectively.”