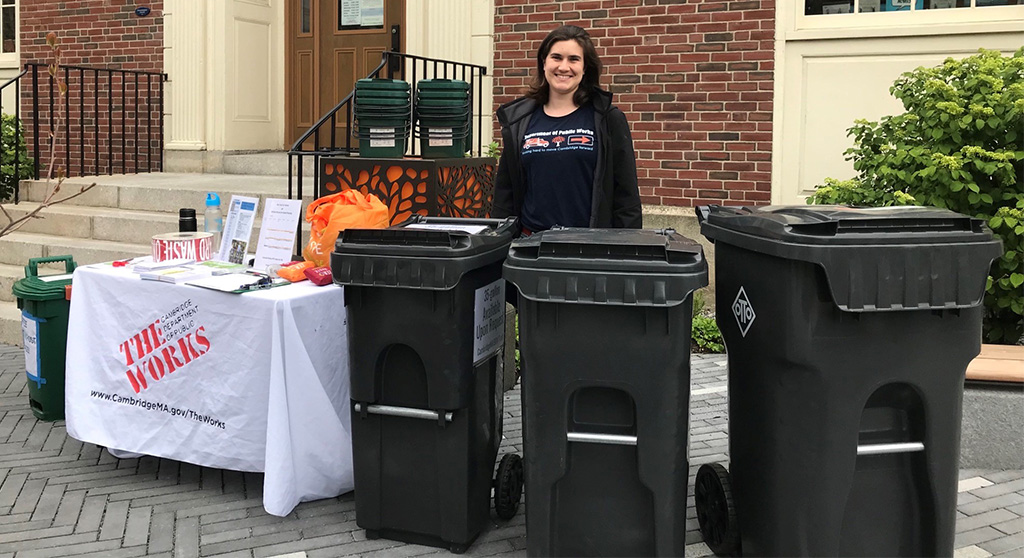 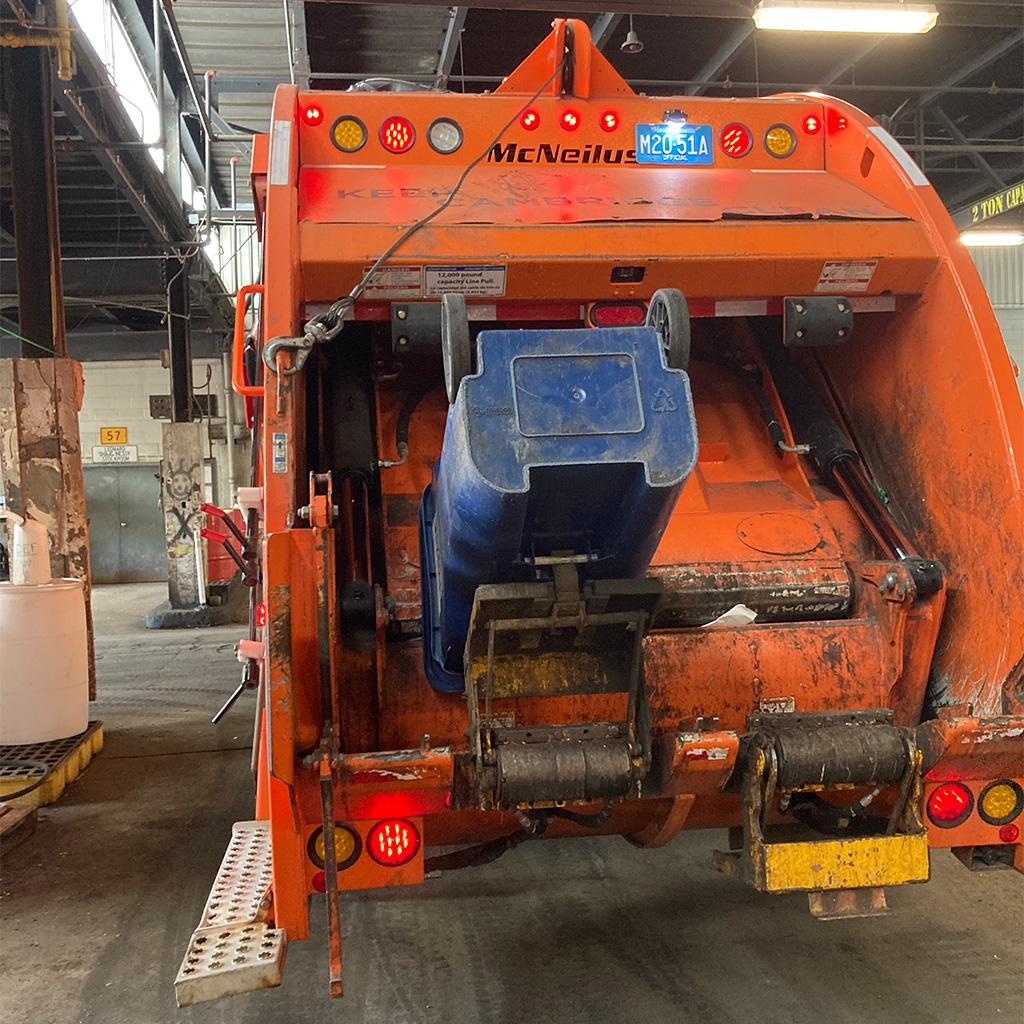 Trash trucks are being retrofitted with tippers to automate some pickup processes. (Photo: John Fitzgerald)

After the city delivers free, standardized, trash carts next month, only those city-issued carts will be emptied by the Department of Public Works’ orange trash trucks making weekly rounds.

That affects the more than 32,000 households using the city’s curbside trash collection, whose 11,000 buildings are due to get about 20,000 of the new wheeled, rat-resistant carts June 6-24. Delivery dates depend on trash pickup days; older carts bought by residents will be ignored during pickups starting June 27.

Rodent control and worker safety are two major reasons for the new carts. “Rodents use their sense of smell to find food,” Mike Orr, Cambridge’s recycling director, said Tuesday. “Currently, about 45 percent of trash bins have evidence of holes or rodent issues. “Going from 45 to zero percent of trash bins having holes will make a huge improvement.”

Orr urged residents to compost all food waste. “The green compost carts have a latch. When the latch is closed, it seals off a lot of the odors.”

According to Public Works commissioner Owen O’Riordan, “Approximately 10 percent of buildings set out trash in plastic bags, which often are the source of food for rodents, so trying to encourage these households to use carts will be a priority of DPW.”

Though plastic bags aren’t banned, “you can’t put white kitchen bags out at the curb,” Orr said. “It’s got to be at least 3 mils thick, like the black contractor bags you can buy at the hardware store.”

The new trash carts are also designed to improve worker safety. “Physically picking up and emptying heavy trash barrels over and over for hours every day is difficult work,” Orr said. Trash trucks will be retrofitted with tippers. Though workers will still roll carts to back of the truck, the process of tipping the contents into the truck will be automated. 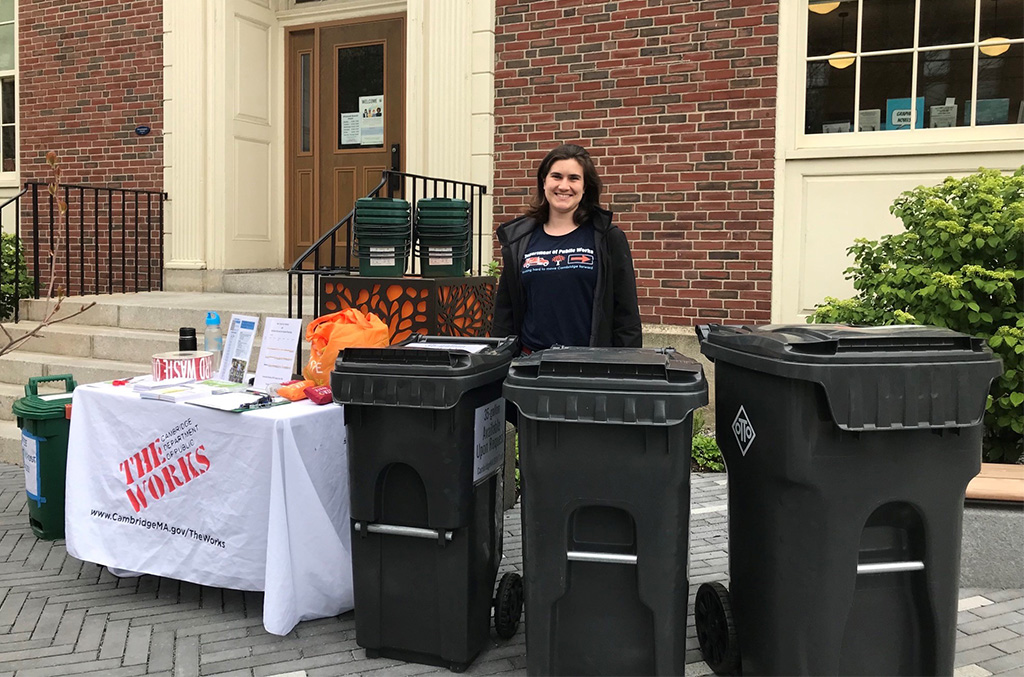 Public Works encourages residents to consider the smaller trash carts and to divert as much material as possible to recycling, compost and the new textile recycling program that launched last year. As of Wednesday, city staff said, 1,280 people had requested alternative carts, with more than 50 percent opting for a smaller cart. “People should choose the smallest bin that suits their needs,” O’Riordan said.

Samples of the new carts will be on view at the the Cambridge Main Library, 449 Broadway, Mid-Cambridge, from 11 a.m. to 1 p.m. Saturday. The deadline to submit a change for what carts your building gets is Tuesday.

After delivery of the new carts, which are made of 40 percent post-consumer content, residents can repurpose or recycle their old bins. Otto Environmental Systems, the contractor providing and delivering new carts, will pick up and recycle old, empty bins left at the curb on special pickup days.

Old bins of 45 gallons or less for can be used for yard waste, and “yard waste” stickers are available from Public Works. You can also find a new home for old bins by listing them on Freecycle or Craigslist in nearby communities.

The new trash cart rollout is funded by a $1.5 million City Council appropriation from March 2021 and a $200,000 appropriation in this month for pickup and recycling of old bins.