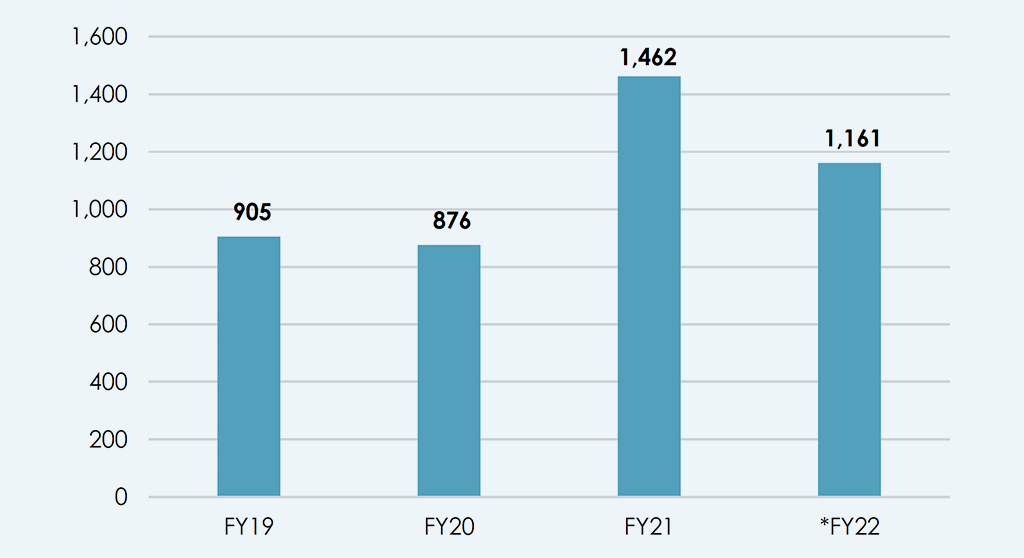 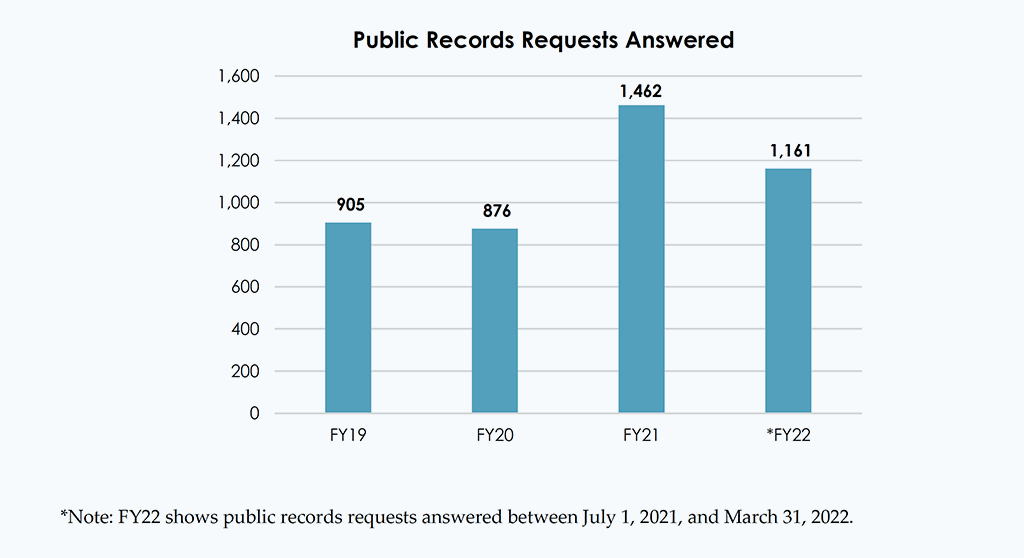 A chart from the city’s submitted budget.

With all due respect to city councillor Patty Nolan, her questions Tuesday into the Law Department and public records law didn’t go far enough.

During budget hearings – the Law Department is due $3.9 million in funds – Nolan noted the rise in the number of public records requests to as many as 1,462 in the 2021 fiscal year, though the number can be as low as the 876 requests from the year before. Nolan wanted to know about the timeliness of responses, which state law says must be within 10 business days.

There are so many public records requests that the Law Department has hired another employee to try to keep up. “The requests have grown exponentially,” city solicitor Nancy Glowa told Nolan. “We actually have increased that department after the statute changed from one public records access officer position to two people – we now have an assistant public records access officer. And I’m sure that they could use two more starting today and still be overwhelmed. There’s a huge amount of work, and they work incredibly hard: nights, weekends, there’s a tremendous amount of work. But our goal is always to comply with the statutory requirements.”

What Nolan didn’t ask was why there are so many requests, and how the figure has risen not since the 2020 fiscal year, but since that statute change was implemented Jan. 1, 2017, and allowed response time went to 10 business days from 10 calendar days. Nolan didn’t ask how many requests went unanswered. She didn’t ask whether the city was taking simple questions to city staff and turning them into public records requests that bloat the figures unnecessarily and clog the system. (It is.) Nolan didn’t ask whether city staff essentially impersonate residents to create “public records requests” without permission. (They do.)

This is additionally important because Nolan offered future funding for technology that could help, and Glowa turned her down by noting that the department put new tech in place for that purpose in 2017 and already has help from city information technology specialists – and that public records access officer Seah Levy has “significant background in IT-related work herself … I don’t think we could use additional technological support, because we have already put a great deal of thought and time into developing the system that we’re using.”

The most recent public records request I made was in July 21. (My records show I made four records requests in all of 2021. This was the fourth.) By statute, that should have drawn a response by Aug. 4; my response came Oct. 19, though, which is 90 calendar days later or 62 business days – late by 52.

Notice the timing: Ninety calendar days is the deadline for an appeal.

Since the initial request wasn’t responded to “timely,” as Glowa likes to say, the information was less relevant than if the city had followed the law. But the information would still be good to have, so at 84 days – six days until my appeal deadline – I called the Law Department to ask Levy what was going on with the request and whether I would have to waste my own time and that of state staff with appeals paperwork.

But whoever answered the phone at the Law Department when I called Oct. 12 would say only that Levy was “unavailable” and that my only recourse was to leave a message. Conscious of the deadline, I asked what that meant: She’s quit? She’s on vacation? Or she’s at lunch, or on the other line? Whether Levy was coming back in an hour, a day, a week or never made a difference to what I needed to do. But the Law Department refused to listen, refused to answer, hung up on me and told me when I called back that if I called again, it might be considered harassment.

That’s right: The Law Department, which was in violation of state law, threatened to file a false charge against me – one implying I was acting willfully and maliciously to be cruel, hostile or to seek revenge and to cause fear, intimidation, abuse or damage to property – for trying to ensure my rights under the same state law the city claims to work so hard to follow.

I called the City Manager’s Office the next day to report what had happened – both the Law Department’s failure to follow the law and its threat against me, but also of its need to apologize to me for that threat.

On the very first call, I was asked if I wanted “to be contacted about this,” and I gave my name and contact information. By December, that became “I’m not familiar with your complaint” and yet another offer to “check in and see what’s going on and get back to you” – another offer never acted on. I was told early on that the office had “sent over” my concerns but hadn’t heard anything back, so my “best bet” was to talk with Glowa herself.

She won’t respond to the City Manager’s Office, which employs her, but maybe she’d respond to me, the complainant, the thinking seemed to be.

Because I didn’t know whether Levy was working within the six days after my initial call, let alone whether she was still working for the city or was alive, I went ahead and filed my appeal before time ran out.

Levy finally responded on the last day of the appeal window, meaning that after spending 90 days on a 10-day request she had indeed gone on to waste my time and was now wasting state workers’ time to respond to an ultimately unnecessary appeal – also wasting taxpayer money. Everything I had tried to avoid.

“My apologies for the lateness of this response,” Levy said Oct. 19. “We are extremely overwhelmed with public records requests currently.”

An apology from the Law Department for ignoring me, hanging up on me and threatening me? I never got one.