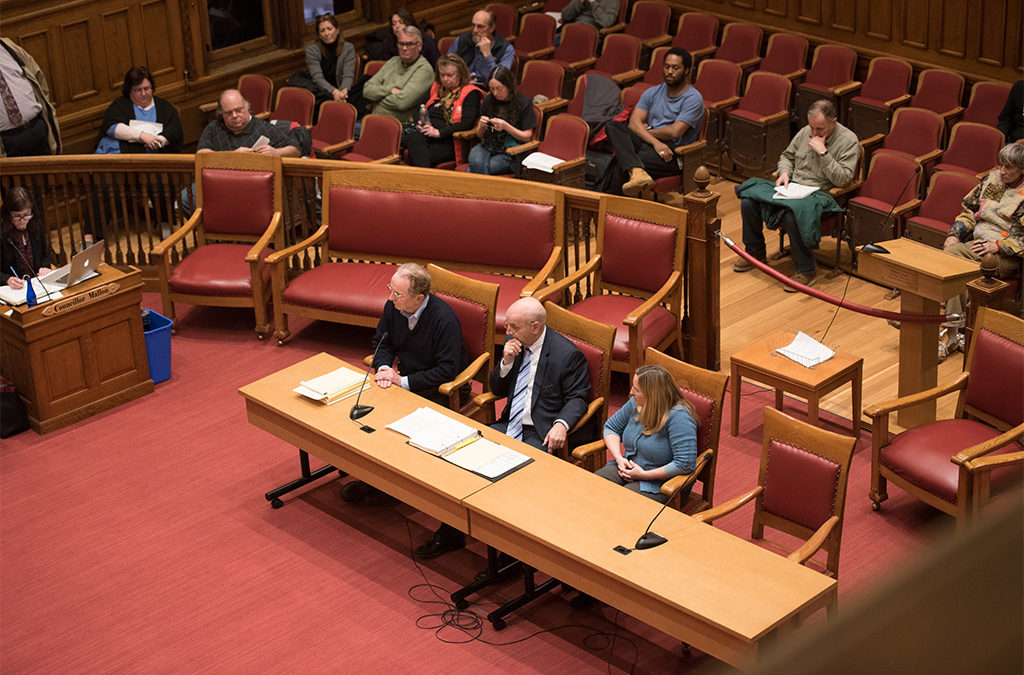 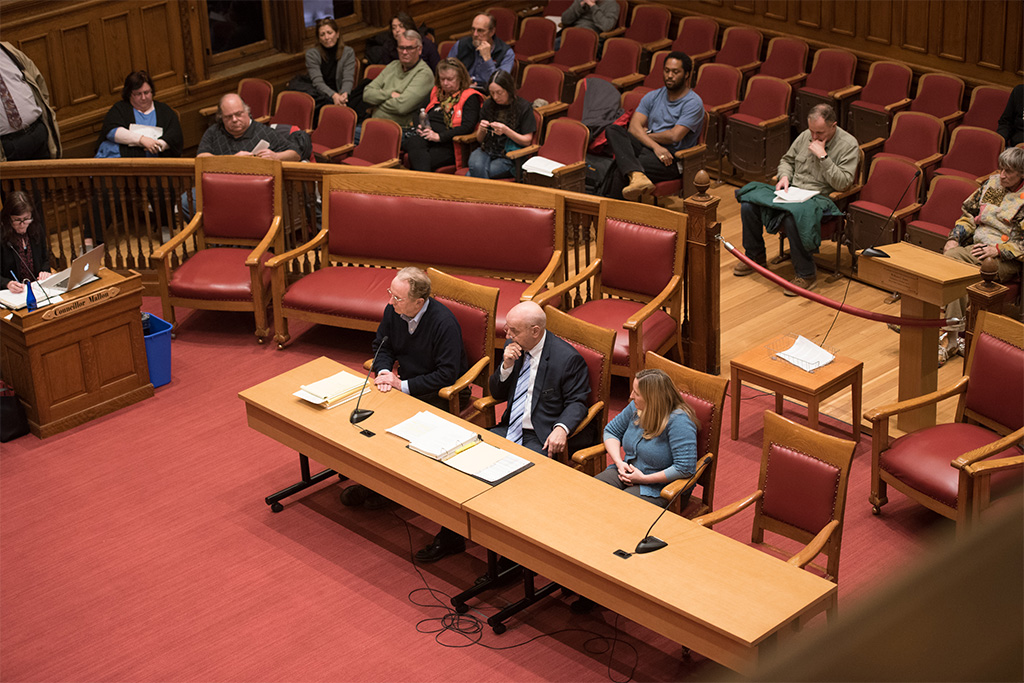 City Manager Louis A. DePasquale, seen in 2018 seated centrally at the table, is overseeing his final budget before leaving office. (Photo: Ceilidh Yurenka)

City councillors got through many questions last week at a hearing about the next municipal budget – a proposed $787.9 million budget for the 2023 fiscal year, which starts July 1 – and another hearing is set for Tuesday. These are a few more items that jumped out from the previous Tuesday’s discussion chaired by councillor Patty Nolan.

Most understandable budget ever still has some work to do

It may have been city staff boasting of a new clarity in the budget book that drew a councillor question suggesting there’s still work to be done. “I’ve been doing budgets for about 40 years, and I really think this is the best budget for the residents to really understand where our money goes,” City Manager Louis A. DePasquale said, calling the lack of ambiguity a multiyear effort among his own office, finance staff and the council’s own Finance Committee chairs. Yet it wasn’t long before one of those chairs, Dennis Carlone, asked why $18 million to buy the 4-acre Buckingham Field in West Cambridge was listed as a “travel and training” expense. “I’m sure it was just a mistake,” Carlone said, until being corrected mid-sentence by staff. “It’s not a mistake?”

It’s not a mistake. The expenditure on a piece of land is “required” to be presented as “travel and training” under the statutory categories of the Uniform Massachusetts Accounting System that Cambridge follows (and so is the paying out of damages for lawsuits). The only categories are salary and wages; other ordinary maintenance; travel and training; and extraordinary expenditures – and somehow paying for land or to settle a lawsuit does count as travel and training and does not count as an extraordinary expenditure. “It’s counterintuitive,” assistant city manager for finance David Kale admitted to Carlone, “and I understand why you may have had the question.” Perhaps the extraordinary thing is that Carlone is just noticing it; the practice isn’t new.

Despite surging public records requests, Law Department is all set on tech

The number of public records requests has risen to as many as 1,462 in the 2021 fiscal year and is nearly as high this year, a figure that city solicitor Nancy Glowa said has “grown exponentially” since a state law around records changed in 2017 – though it’s entirely unclear what it was about the law that caused the surge. (Here’s the secretary of the commonwealth’s description of major changes to the law and a summary from the Mintz law firm.) Though there are now two people handling Cambridge records requests, “I’m sure that they could use two more starting today and still be overwhelmed. There’s a huge amount of work, and they work incredibly hard: nights, weekends, there’s a tremendous amount of work. But our goal is always to comply with the statutory requirements,” Glowa said.

Nolan offered future funding for technology to help, but Glowa turned her down by noting that the department put new tech in place for that purpose in 2017 and already has help from city information technology specialists. Also, public records access officer Seah Levy has “significant background in IT-related work herself,” Glowa said. “I don’t think we could use additional technological support, because we have already put a great deal of thought and time into developing the system that we’re using.” The Law Department is due $3.9 million in funds.

The city is considering raising the annual parking permit fee …

Raising the price of a parking permit from $25 has been discussed by the City Council a few times in recent years, and the city’s Traffic, Parking and Transportation chief, Joe Barr, acknowledged Tuesday that “we’re certainly looking at that.” What councillors talk about is not just a bump in price for the basic permit, but the possibility of having the price leap for a second car (to possibly $100) and even more for a third per household (to possibly $200), “to make it enough so that people at least pay attention,” in Nolan’s words, because councillors want to encourage residents to give up private cars in favor of transportation that clears traffic from city streets. Barr said there was no timeframe on the discussions, which have to take into account means testing so lower-income residents aren’t hurt disproportionately.

Barr said work was coming from his department and Community Development “in the not-too-distant future” to understand the impact higher fees would have on car ownership, since he agreed with Nolan that “it’s a relatively small percentage of the total cost of ownership.” “Even if we raised it significantly, it might still not actually discourage car ownership – it would just generate more revenue,” Barr said. “It’s a sensitive topic.”

… as other parking revenue has waned

The money the city pulls in from transportation fell during Covid – fewer people driving and parking meant fewer tickets and less revenue – but may never come back even if Covid fades completely, Barr said. “We’re getting back close to where we were on a monthly basis prior to Covid, but it’s still very uncertain,” he said, pointing out that discouraging cars will have an impact and so will the Cycling Safety Ordinance, which adds bike lanes to narrow Cambridge streets often at the expense of parking spots. “The vast majority of tickets we issue are meter tickets. If you remove meters, you remove the opportunity to write tickets on those meters. We’re facing factors, obviously that the council supports, that are removing revenue.”

The revenue under discussion is projected to hit $19.6 million in the current fiscal year and $20.2 million in the next year, while looking back four or five years those line items were “about $25 million, maybe $26 million. Even with the movement upward we’re about $4 million or $5 million behind,” DePasquale said.