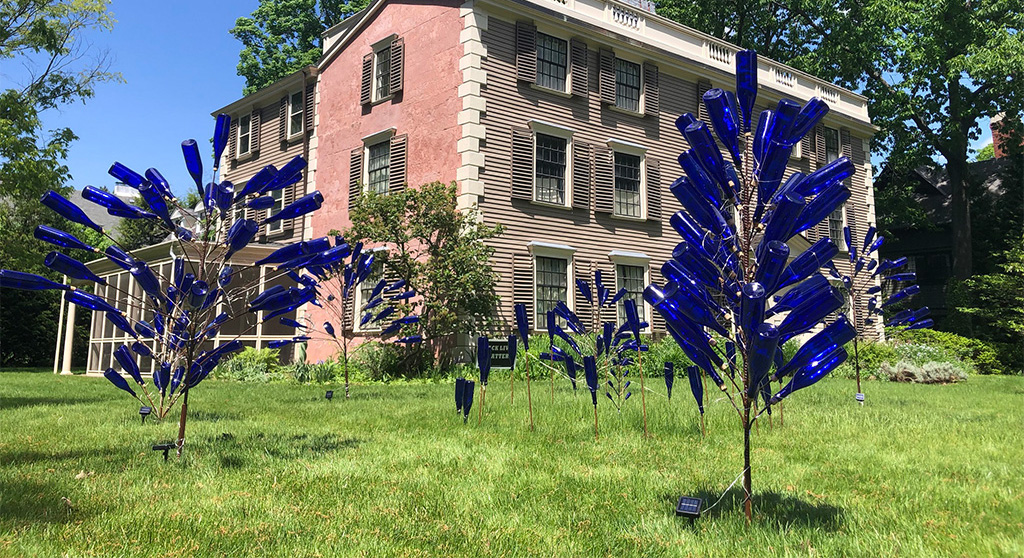 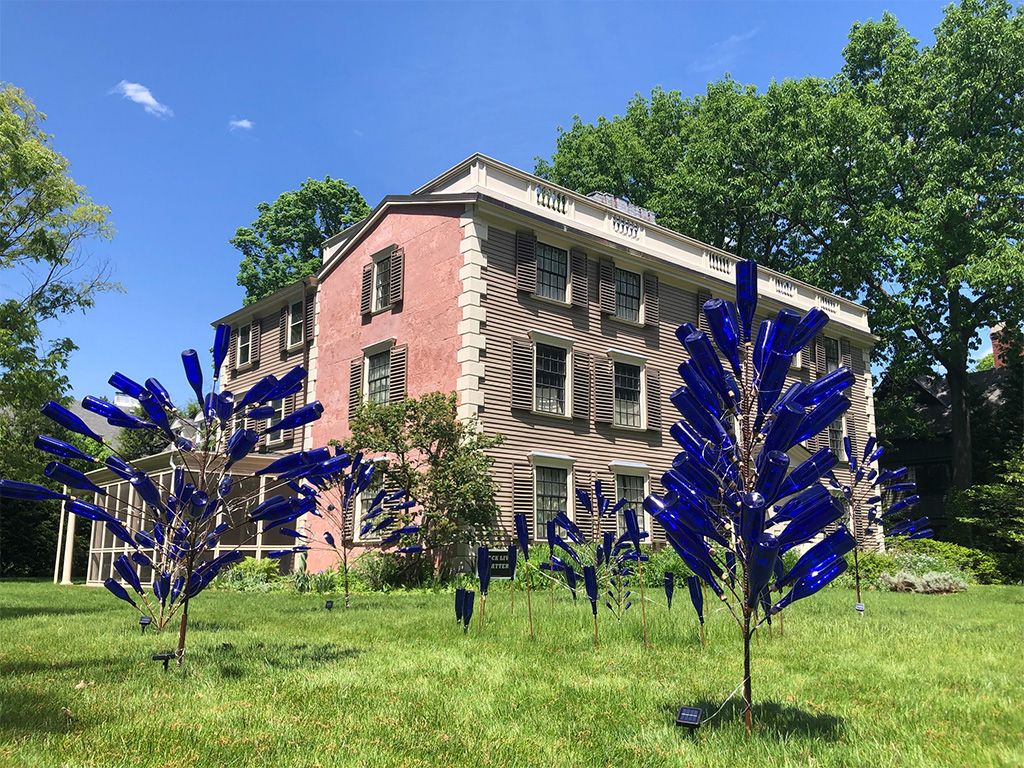 The “Forgotten Souls of Tory Row: Remembering the Enslaved People of Brattle Street” at the Hooper-Lee-Nichols House. (Photo: History Cambridge)

Cambridge and slavery are not often paired in the public imagination. Most think of the enslavement of people of African descent as a Southern phenomenon from which the North, particularly New England, was exempt. But slavery was a very real, ever-present institution in Northern colonies and, later, states – including Massachusetts. Recent efforts by academic and public historians to emphasize the role slavery played in the Cambridge area include the re-centering of Medford’s Royall House and Slave Quarters to focus on the experiences of enslaved people on that estate, as well as Harvard University’s recent release of the “Harvard and the Legacy of Slavery” report. History Cambridge has also been engaged in this important work through our research and public programs, including our Tory Row Antiracism Coalition.

This summer, we were fortunate to get a grant from Cambridge Arts and the Mass Cultural Council to create a temporary public art installation on the front lawn of our headquarters at 159 Brattle St., West Cambridge. Designed by the artists of Black Coral, “Forgotten Souls of Tory Row: Remembering the Enslaved People of Brattle Street” honors the enslaved adults and children who lived and worked on this land as well as those whose labor on Caribbean plantations helped finance the grand homes of white Tory Row elites.

The oldest existing mention of slavery in Massachusetts was recorded in 1638, when African prisoners arrived in the colony on the slave ship Desire, built in Marblehead the previous year. In 1639, the mention of a “Moor” living in the household of Nathaniel Eaton, master of Harvard College, marks the oldest surviving mention of slavery in Cambridge. Massachusetts was the first American colony to formally sanction human bondage under the Body of Liberties law, which was enacted in 1641. Slavery remained legal in Massachusetts until 1783. The colony served as a center of slave-trading in New England as early as 1645, when a Massachusetts-built slave ship sailed from Boston to Cape Verde, where merchants bought Africans to be sold into bondage either at their next port in Barbados or upon their return to the mainland British colonies.

Some Cambridge families, including those in West Cambridge and the residents of Brattle Street (Tory Row), made their wealth through enslaved labor in Jamaica and/or they enslaved people at their homes and estates. Joseph and Rebecca Lee, the owners of the circa 1685 Hooper-Lee-Nichols House, the headquarters of History Cambridge, were complicit in this economy. “Today when you walk up and down Brattle Street, you don’t know that,” notes Marieke Van Damme, History Cambridge’s executive director. “There are signs saying, ‘A wealthy person lived here. They were a Tory.’ Nowhere does it say this ground was walked on daily by enslaved people brought here against their will. Or that this wealth was made by enslaved people whose names we don’t know, who we don’t talk about.” 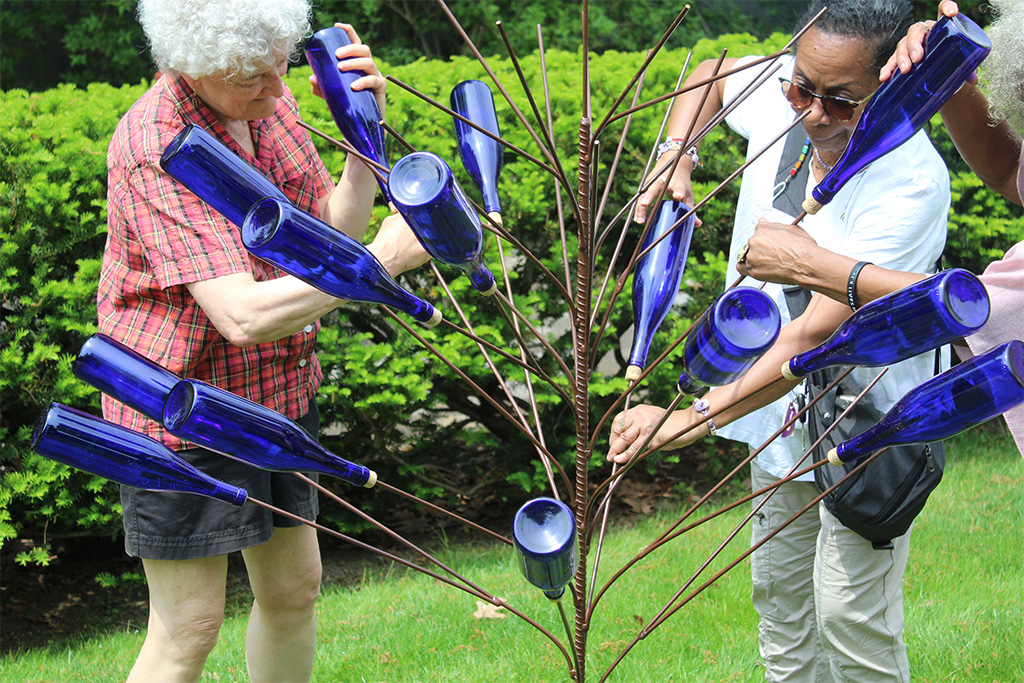 The art installation is put together at at 159 Brattle St., West Cambridge. (Photo: History Cambridge)

This summer’s installation by Black Coral is a collection of bottle trees. Originating in the Congo in West Africa and dating back to at least the ninth century, the bottle tree tradition was brought to the United States by enslaved people, most notably those who lived in Georgia and South Carolina. This tradition was passed down through generations of enslaved and, later, free Black communities, marking the survival of a cultural practice despite the bonds of slavery. The distinctive blue bottles were placed on tree limbs to capture the energy, spirit and memories of ancestors.

The installation by Black Coral is composed of two circles of “trees” made of iron  –  an exterior circle and a smaller interior circle. Blue glass bottles are placed on the end of the branches to form bottle trees. The trees are strung with with solar lights that illuminate at dusk. These trees represent the adults and children enslaved on what we now call Brattle Street by prominent Cantabrigians such as William Brattle, Lt. Gov. Thomas Oliver, the Lees and the Vassalls. Although we do not know all of the names or life experiences of the enslaved people, we aim to honor their humanity through this installation and restore their physical presence to the land where they once lived and worked.

“I hope this is an inspiration for other historical organizations and educational institutions to start talking about the work that enslaved people did,” said Pam Goncalves, one of the artists of Black Coral. “I hope it’s a way to bolster the self-esteem and self-confidence of children and adults who don’t hear very much about their own history. Our hope is to make this a positive experience, for people not to feel ashamed of who they are but to be proud and embrace where they came from. This is American history,” Goncalves said.

The piece will be on view from dawn to dusk. Guests are invited to walk in the bottle tree grove to experience the installation fully. There will be a public celebration at the Hooper-Lee-Nichols House on July 16, featuring poetry, drumming and a libation ceremony to honor the Forgotten Souls of Brattle Street. All are welcome to attend the free event.