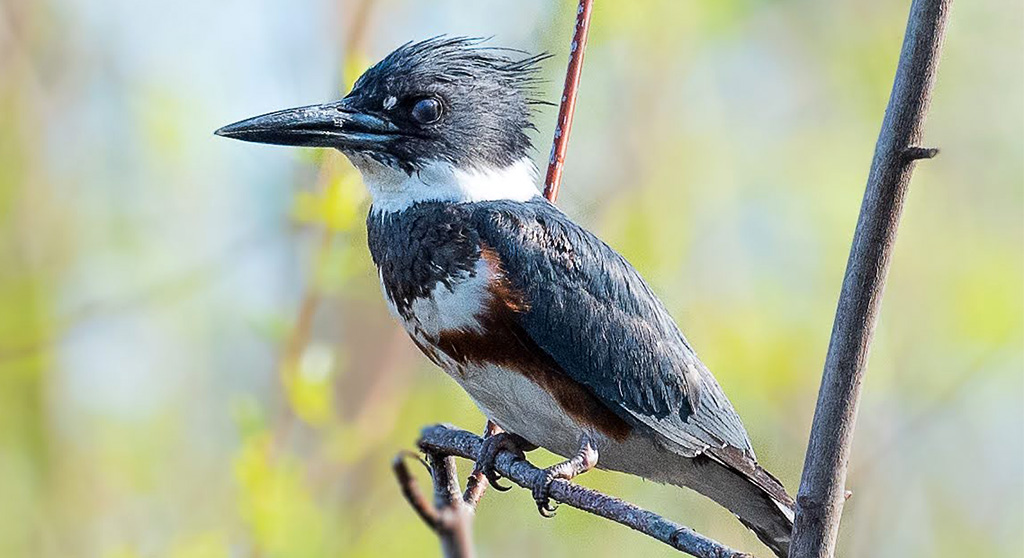 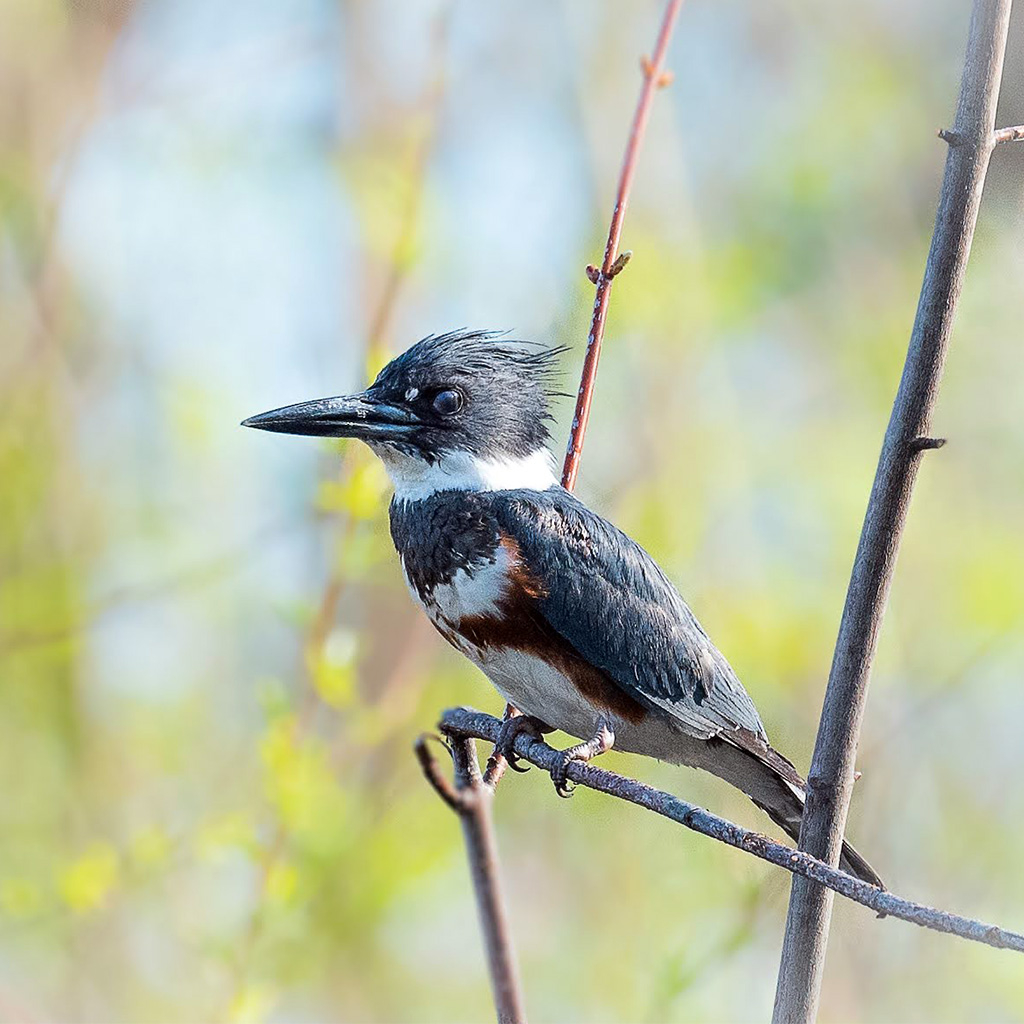 The belted kingfisher (Ceryle alcyon), native to North America, is widespread in Massachusetts and can be found along riverbanks in Cambridge. It lives in banks or cliffs near water (either fresh- or saltwater). A kingfisher sometimes hovers, but most often perches on a high branch, post or telephone wire looking for fish to eat. When it spots a small fish, the kingfisher dives headfirst into the water from 20 feet or more in the air. After catching a fish with its long bill, it perches on a branch, where it slaps the fish against a branch to kill it. Then it maneuvers the fish around in its mouth and swallows the fish headfirst. After eating, kingfishers may regurgitate a pellet of bones, scales and other indigestible parts. Kingfishers, as the name implies, eat mainly fish, but they will also eat crabs, insects, frogs, small mammals, young birds, lizards and tadpoles, for example. 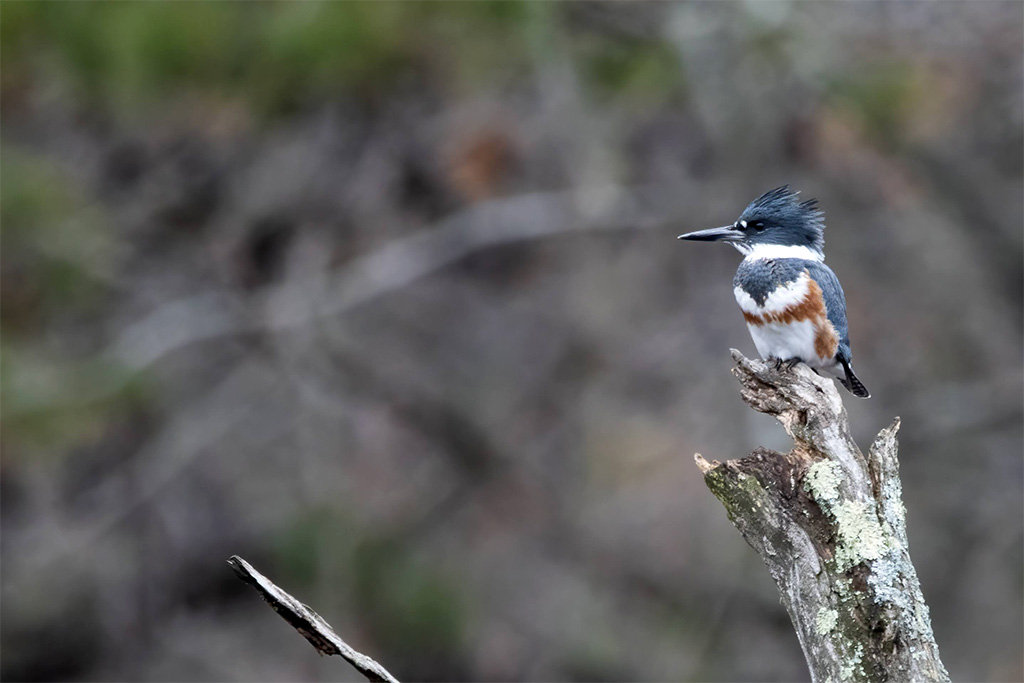 A kingfisher has a spearlike bill that it uses to cut through the water. It doesn’t actually spear fish, but opens its bill to tightly seize its prey. (Photo: Richard George)

In a report on the birds of Massachusetts to the Legislature in 1839, William Peabody wrote:

The belted kingfisher . . . may generally be seen sitting on some post or dead branch . . . . If fish do not come near him, he sweeps along the course of the stream with rapid flight, and occasionally hovers over the water as if watching something beneath. Having made sure of his aim, he darts down, and seldom rises without his prey.

As might be imagined, kingfishers have excellent vision. Their eyes do not move much within the socket, so these birds must turn their head to track prey. But, even so, from great heights they judge depth and compensate for the refraction of water to accurately catch their prey. 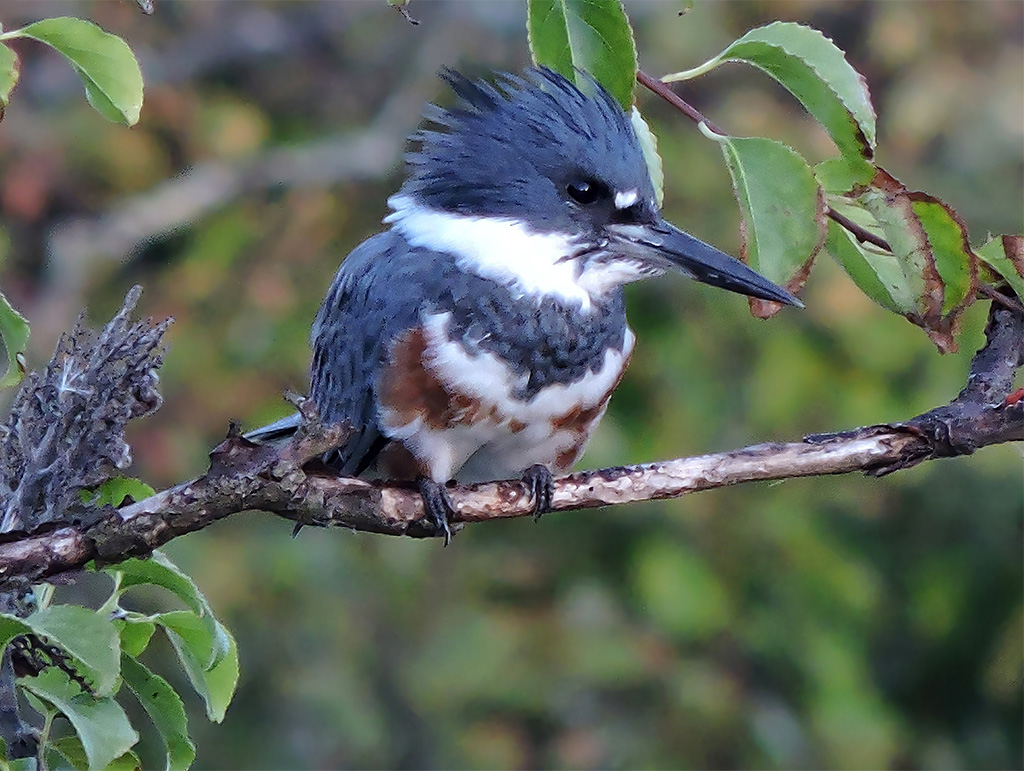 Female and juvenile belted kingfishers – such as this one at Alewife Reservation – have a rusty band. (Photo: Ann Schlesinger)

Kingfishers return to our waterways in March and April. They build nests near the top of a bank, away from vegetation. Males and females dig a 3- to 10-foot tunnel in the bank leading to an underground nesting chamber. Because the tunnels slope upward, if the area floods, the chicks will be able to survive in the air pocket that forms.

Kingfishers do not line their nest, but even so it can take up to three weeks to dig out. Kingfishers are quite protective of their nests, and will attack birds much larger than they are if the intruder comes too near. According to Peabody, “If scared from his retreat, [the kingfisher] flies off with a grating sound of displeasure, resembling the noise of a watchman’s rattle.” 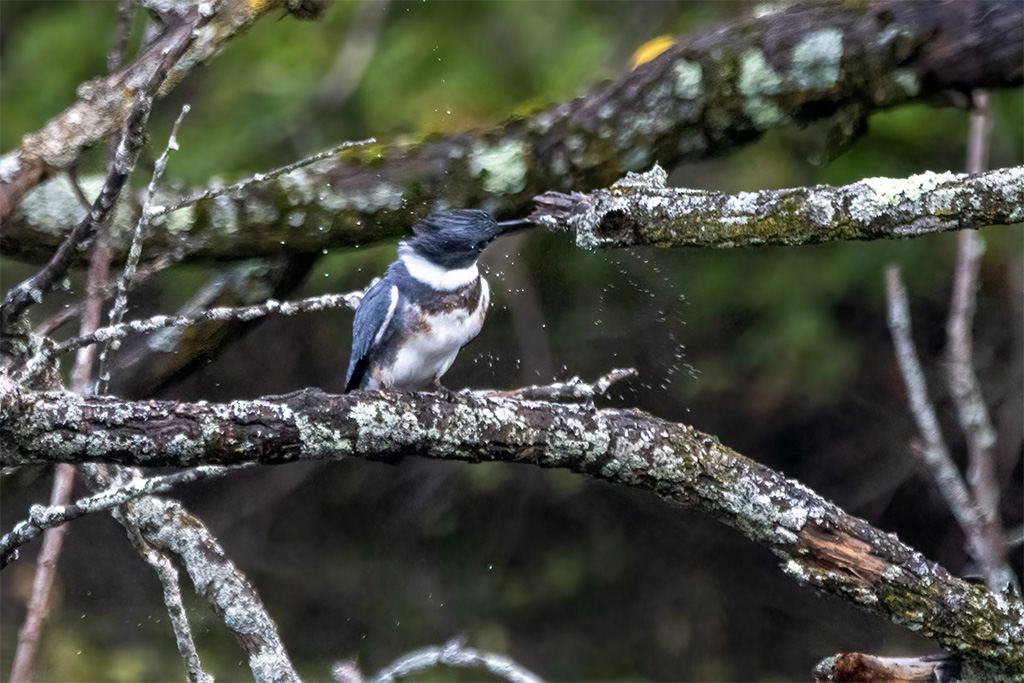 A kingfisher shakes off after a dive. A kingfisher relies on its vision to hunt, diving from high perches to seize underwater prey … (Photo: Richard George) 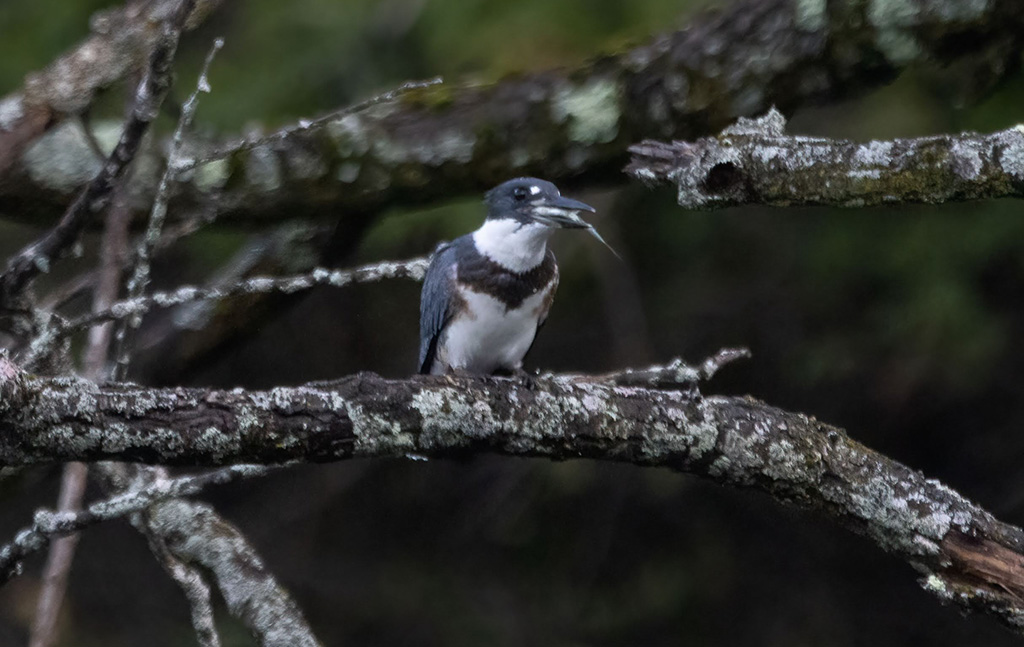 … and unlike many other fish-eating birds, do not seem greatly harmed by environmental toxins, perhaps because kingfishers eat small fish that have not accumulated high levels of pollutants. (Photo: Richard George)

The female kingfisher lays about six eggs, which the male and female incubate for about three weeks. The female incubates the nest at night; the male takes over incubation duties in the morning. When the chicks hatch, they are pink, naked and helpless. (FYI: Birds that lay eggs with large yolks hatch chicks that are fully feathered. Birds that lay eggs with small yolks hatch chicks that are naked and defenseless.) Both parents feed the chicks too – at first, partially digested fish, but as they grow, fish to swallow whole. Over time, the kingfisher nest becomes littered with fish scales, excrement and regurgitated food pellets. After about 18 days, the chicks start to grow feathers. The chicks stay with their parents about a month, until they can forage on their own. Then they separate and become solo independent hunters.

The female kingfisher sports a rust-colored band across the belly that makes it more colorful than the male. 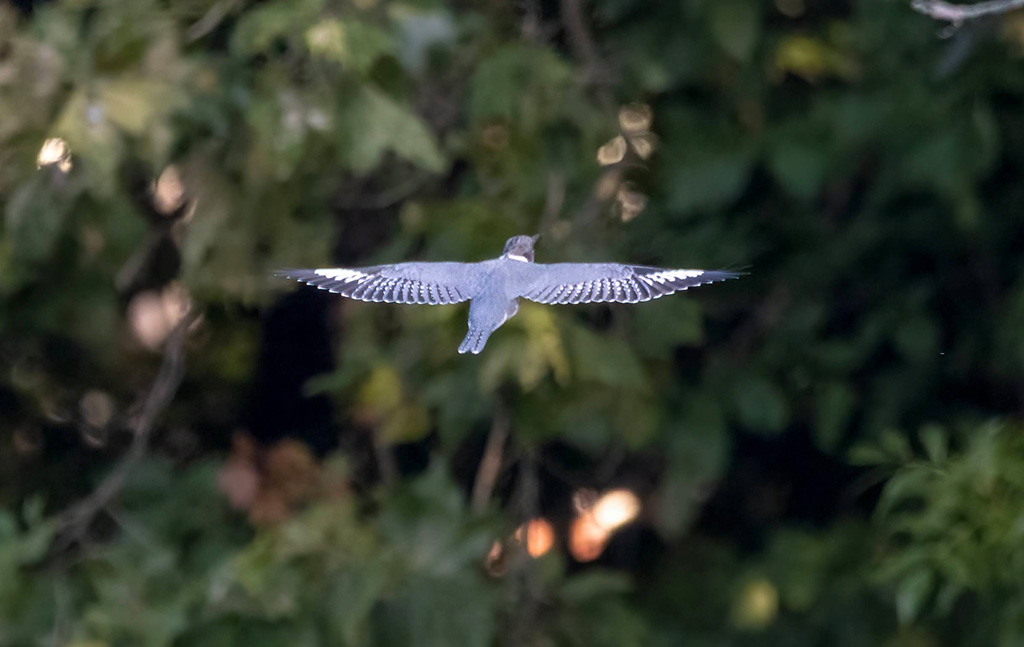 A kingfisher displays its plumage in flight on Strawberry Hill. (Photo: Richard George)

A few belted kingfishers live in Massachusetts year-round, but you are most likely to see them from May to October. According to Peabody, “When the northern rivers are frozen, the kingfisher resorts to the sea, where it may occasionally be seen fishing as in fresh water.” In the fall, however, most kingfishers migrate to the coasts of Central America, South America or the Caribbean, where they overwinter.

The belted kingfisher is abundant (there are about 1.8 million in North America), but its population has declined by about 40 percent since 1966. In most areas, belted kingfisher numbers are relatively stable; in some regions the population is down because of habitat destruction. In earlier times, people trapped and shot these creatures because they feared the birds would threaten trout streams and fish hatcheries. 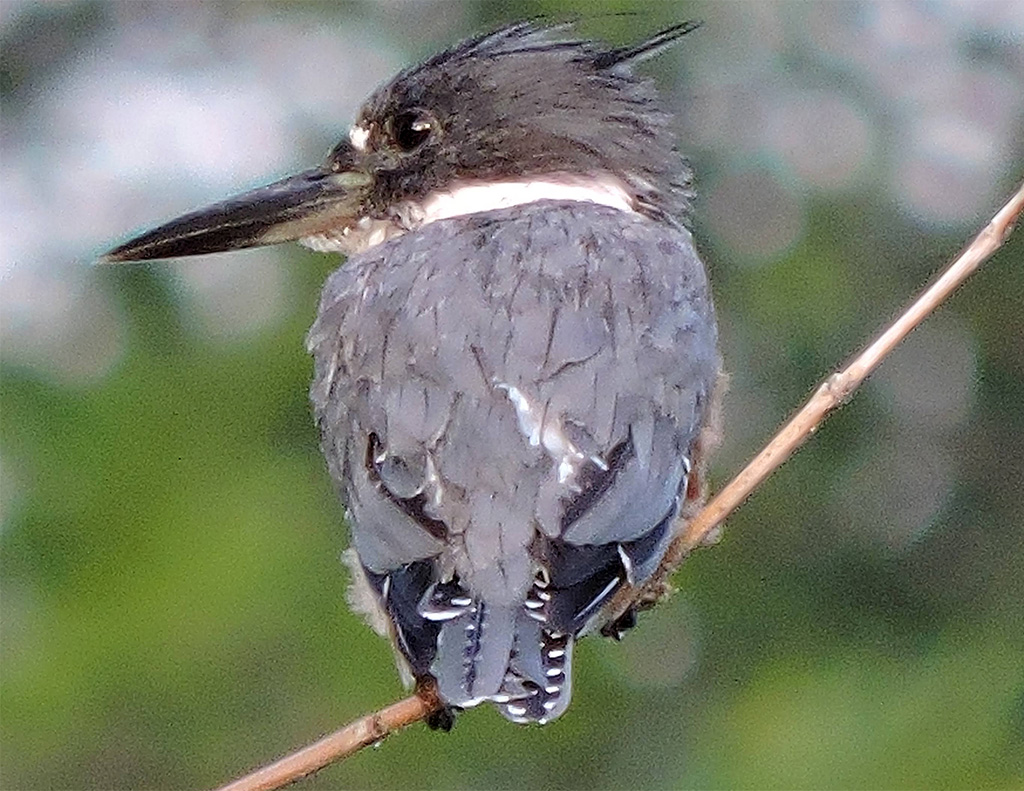 A kingfisher at Alewife Reservation. Kingfishers have large heads and bills compared with the rest of their bodies. (Photo: Ann Schlesinger) 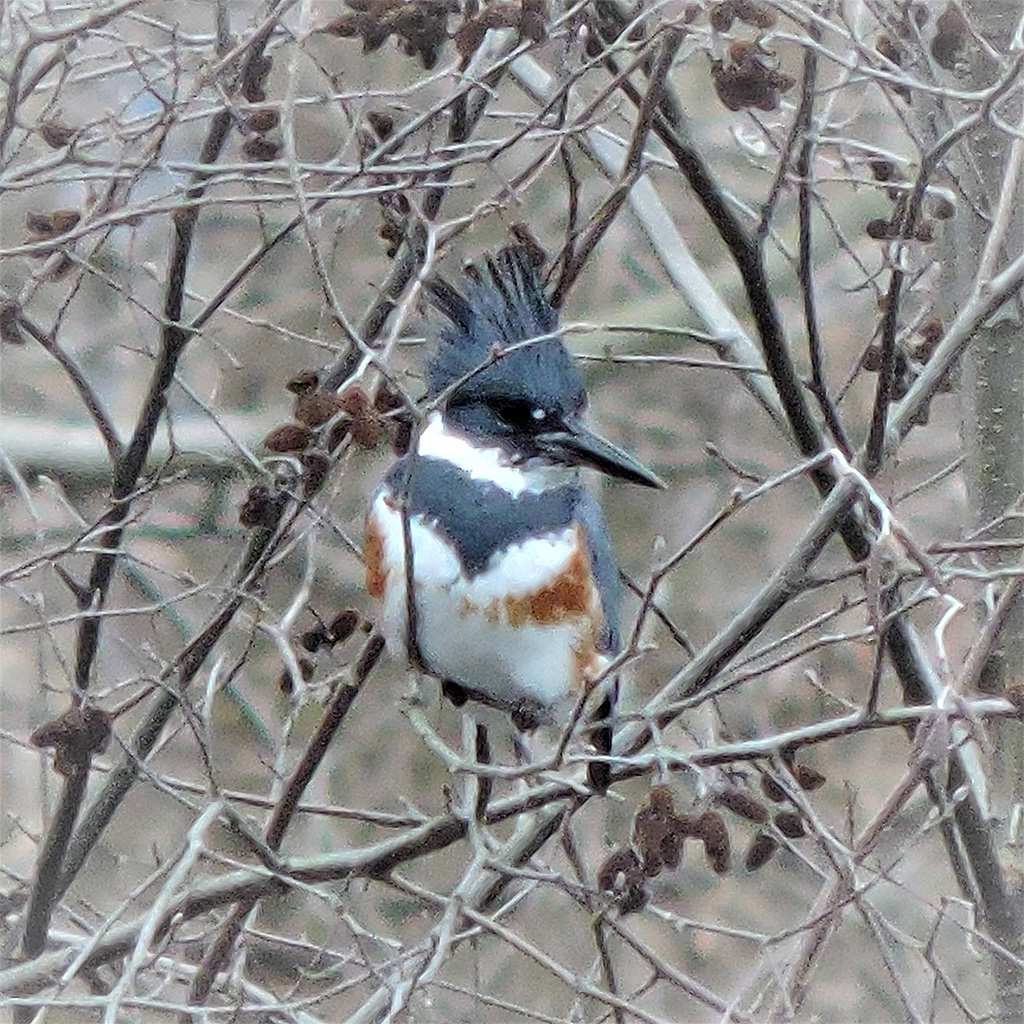 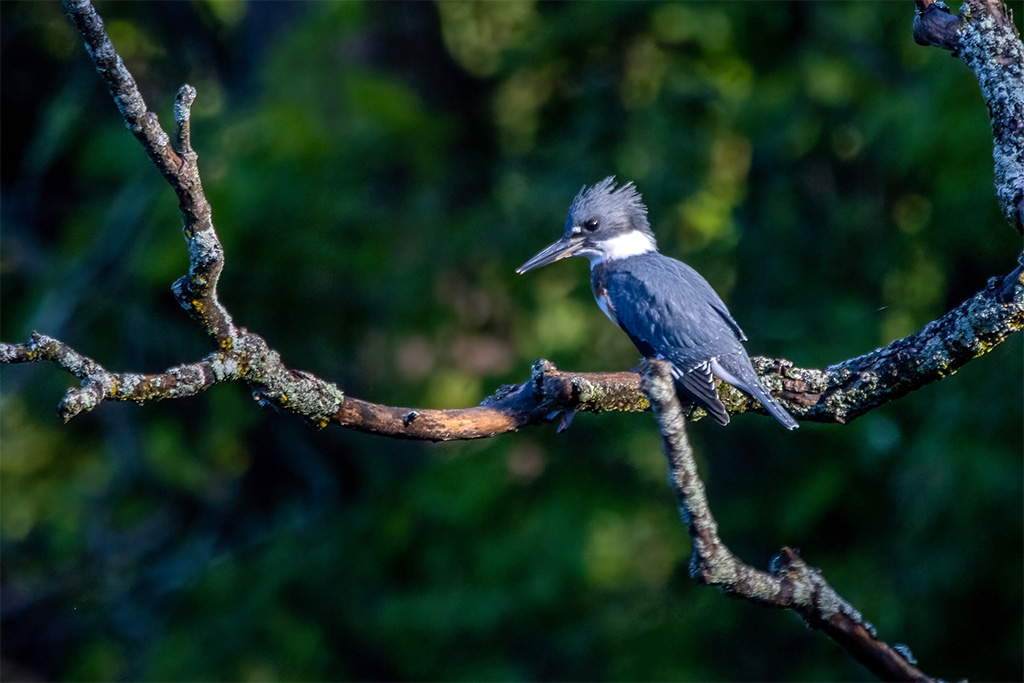