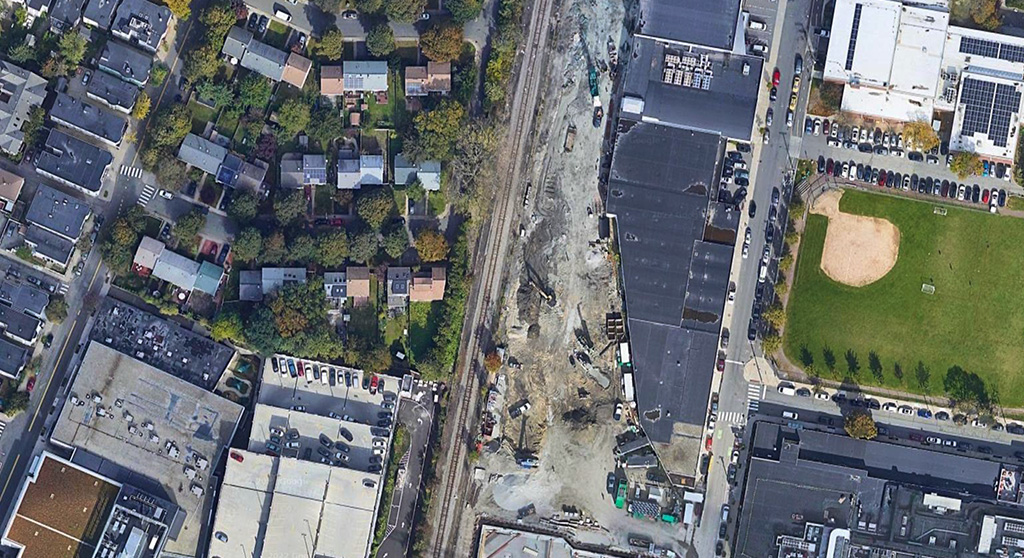 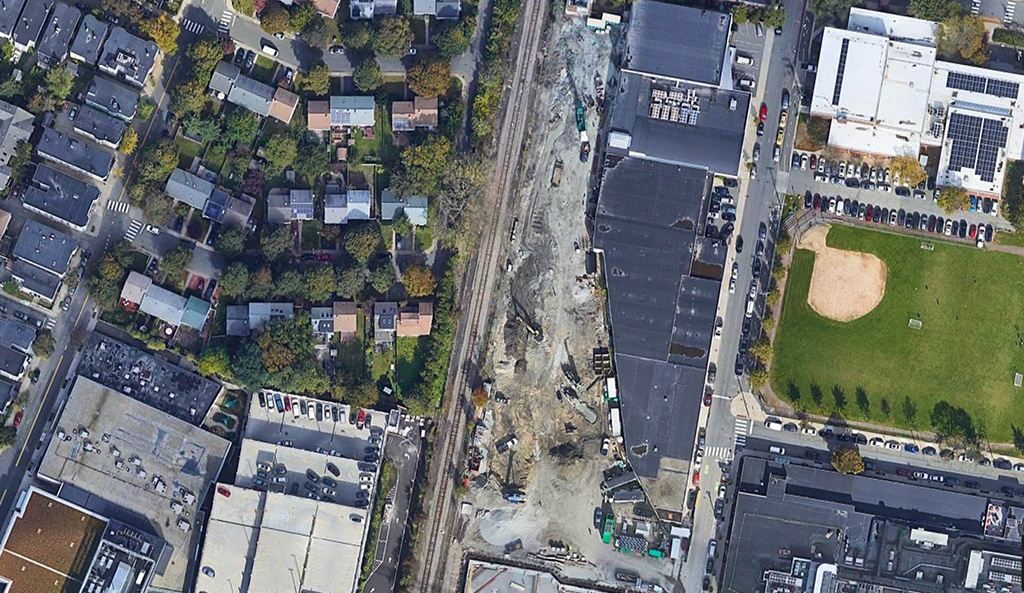 Eversource is proposing a new high-voltage line in a residential area when it could send it down the train tracks seen between Cardinal Medeiros Avenue, left, and Fulkerson Street. (Image: Google)

The City Council urged Eversource on Monday to place a high-voltage electrical line away from homes.

The company’s preferred route would run along Hampshire and Columbia streets, intersecting Windsor Place to cross MBTA commuter rail tracks toward a Somerville substation, though it has an alternative route along rail tracks running parallel to and between Cardinal Medeiros Avenue and Fulkerson Street. In a statement after the meeting, the power company said it was still evaluating routes and “working diligently to be good neighbors” as it worked to meet current and future needs of customers in Cambridge, Somerville, Allston and Brighton.

Many community members have expressed concern at the prospect of heavy construction through the heavily populated and traveled streets of the preferred route.

Eversource is not obligated to take residents’ concerns into account when finalizing the decision. But councillor Burhan Azeem, who wrote a policy order urging that the train-tracks route be used, said Eversource’s preference makes no sense to him.

“It’s particularly confusing to me why they’ve chosen to do this when they have an existing alternative route that goes through Grand Junction that they themselves have proposed,” Azeem said. “There was originally fear of having interference with the MBTA, but as part of the I-90 reconstruction, those tracks will be closed. And the alternative is to go on a populated street where there will be tons of reconstruction and lots of families will be impacted.”.

During public comment, four of 13 speakers spoke about Eversource – all in favor of the alternative route. Caleb Neelon shared concerns about construction disrupting old-growth trees; Catherine Rich shared a story of how construction on narrow Columbia Street shook her house and kept her and her family up an entire night; Vi Nguyen worried her children would be subject to construction debris and contract asthma; Serenus Hua cited “a few thousand bike commuters” that would be affected by construction on Hampshire.

Numerous other neighbors have come forward with concerns, councillor Quinton Zondervan said. “It’s clear that the alternative route would be much less intrusive to the Wellington-Harrington neighborhoods,” he said. “I understand that Eversource [is] not subject to our decisions on the matter, but I hope that they are listening and that they will reconsider, because it is really important.”

It may be helpful to speak with Eversource directly at a committee hearing, Zondervan said, but there’s no meeting scheduled.

Chris McKinnon, an Eversource spokesperson, said after the meeting that the company continue to evaluate “all of the proposed routes and have been incorporating public feedback received into viable solutions that best balance the goals of the community and those of the program.”

“We appreciate the thoughtful conversation and remain committed to working with our community partners as we build a more resilient electric system to safely and reliably serve our customers while meeting growing demand for electricity. We are still in the very early stages of regulatory review and if the program is approved, the EFSB will ultimately select the route that they feel achieves the proper balance of environmental concerns, goals of the community, and costs to our customers, while safely and reliably meeting local energy needs,” McKinnon said for Eversource.

The company announced plans in 2019 for an electrical substation on residential Fulkerson Street, but ended up placing it on Binney Street in Kendall Square after intervention from the Cambridge Redevelopment Authority, city councillors and the developer Boston Properties.

A final resident speaking on Eversource, East Cambridge resident Heather Hoffman, noted how quickly after the deal to avoid a Fulkerson Street substation the city was back to addressing Eversource and its power needs.

“I hope that the City Council and city administration have caught on to the fact that we needed to have done something about where Eversource was going to be routing new facilities long before Fulkerson Street became a crisis and this became a crisis,” Hoffman said. “We’re making it so that everybody has to electrify. If we don’t do the planning ahead of time, and figure out how this works in the real world, we’re just going to have another series of crises.”