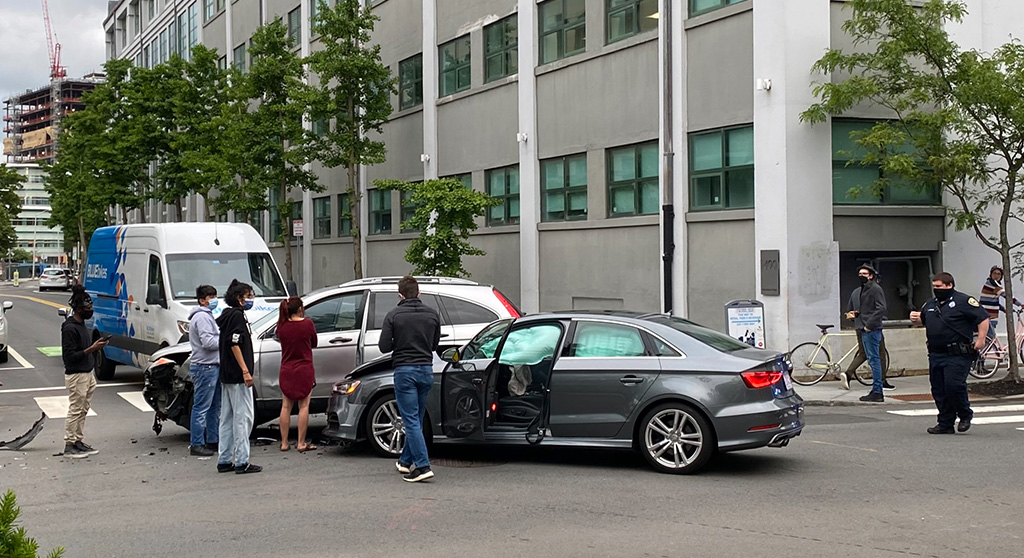 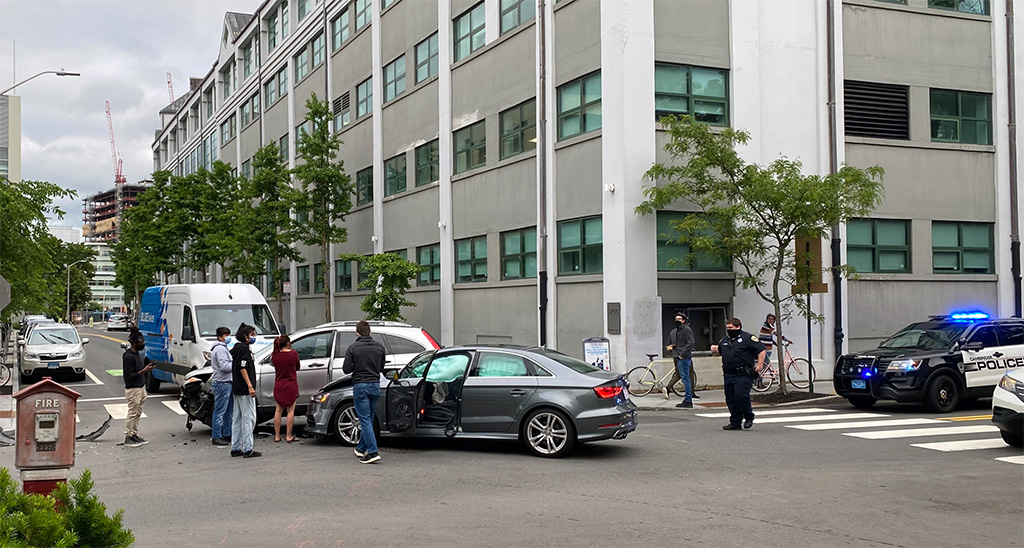 A crash May 31, 2021, is only one of many over the years at Cardinal Medeiros Avenue and Binney and Bristol streets. (Photo: Quinton Zondervan)

A car crash that left two drivers injured July 15 at Cardinal Medeiros Avenue and Binney and Bristol streets has city councillors pleading again for safety measures – the second time in two years at an intersection long known as dangerous.

Councillor Quinton Zondervan has lived at the corner of Cardinal Medeiros and Bristol in Wellington-Harrington for 18 years, and has had cause to fear the intersection since a 2014 crash that ended with a car slamming into the front wall of his home.

“To get a sense of how severe this crash was, you have to understand that this car hit the farthest corner of the house from the intersection. That means the car had to travel an additional 30 or 40 feet after it collided with the other car,” Zondervan said Monday during a council meeting. “Luckily, nobody was home that day, but the psychological damage is considerable because I do not feel safe from traffic violence sitting in my own house – that’s how vulnerable we are. I’m ‘protected’ by a wooden fence and a paper and wooden wall from this car potentially entering my living room.”

His Monday policy order asks that the city manager and Traffic, Parking and Transportation Department take immediate action to improve safety conditions there. It is cosponsored by Mayor Sumbul Siddiqui and councillors Burhan Azeem, Dennis Carlone and Patricia Nolan. 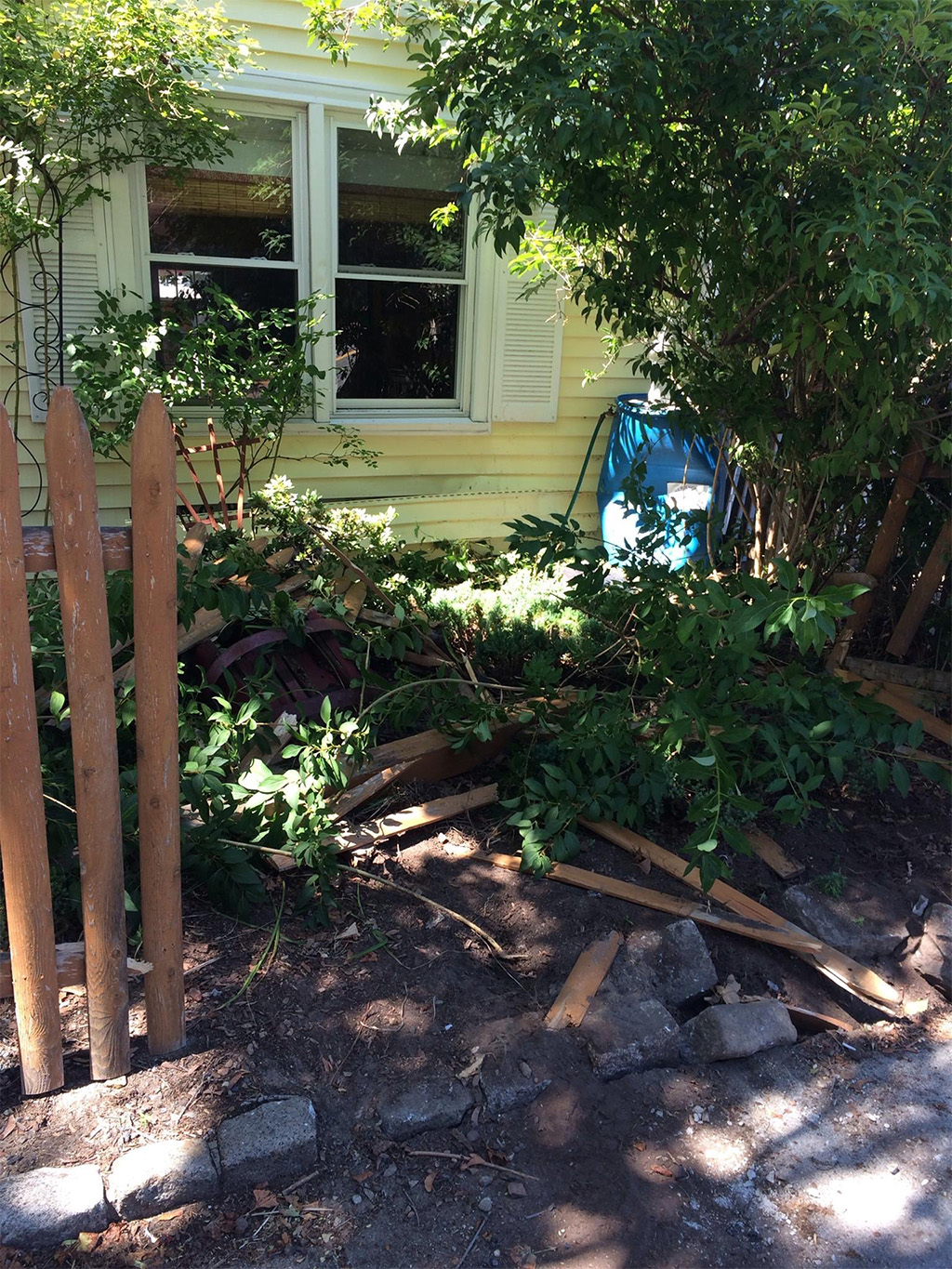 A crash Aug. 19, 2014, sent a car through the fence at a Cardinal Medeiros Avenue home and into its exterior wall below a living room window. (Photo: Quinton Zondervan)

According to police department crash data, there have been 38 recorded incidents at the intersection since 2015, not including the near-misses that residents say occur almost every day. The intersection has poor visibility, while a straight section of Cardinal Medeiros enables speeding, Zondervan said. It was a danger neighbors warned about even as his family arrived in 2004.

Carlone referred to Cardinal Medeiros as a “raceway.”

A restaurant at the intersection was denied patio seating on the street “because it was not deemed safe,” Zondervan said. “If the traffic department knows that it is a safety risk to people sitting there, why is nothing done about it? If we keep rolling the dice like this, eventually somebody is going to get seriously hurt or killed.”

Luis Mejias, who lives two blocks from the intersection, said the July 15 crash added to his concerns about the area. He hoped the order would get action “before someone is killed.”

“I asked an eyewitness what happened at the crash because I couldn’t quite figure it out,” Mejias said. “The impact of the crash was so severe that the car that ran the stop sign was facing almost 180 degrees from where it came, and the car that hit it was probably going too fast to cause it to spin around like that.”

The July 15 crash was personal to Azeem too – not just because he crosses the intersection daily to get to work in Kendall Square, but because it was a friend of his who was injured and his car totaled. He called the collision “horrifying.”

“We were so scared about losing him,” Azeem said. The intersection “is so incredibly dangerous. And it’s something that the city has known for so long.”

The order suggests fixes such as installing a push-button crosswalk on Cardinal Medeiros with flashing lights; a sensor-triggered set of flashing lights to alert drivers to cross traffic; automated speed detection signs; and full-intersection traffic controls, such as lights or four-way stop signs.

The council passed an order last June also requesting that the city manager and staff take immediate action and implement longer-term changes as soon as possible. The 2021 order by Zondervan with Carlone, Nolan, and then councillor Jivan Sobrinho-Wheeler was adopted unanimously; the language in each are essentially identical.

“What I don’t understand is why, after repeated complaints about the danger of this particular intersection, literally nothing has been done to improve it,” Zondervan continued. “Nothing, in over two decades. We submitted a policy order a year ago and we got no response.”

Every time tires are heard squealing, “which happens every single day and happened twice this morning,” Zondervan said, “we are anticipating a crash and somebody getting hurt.”