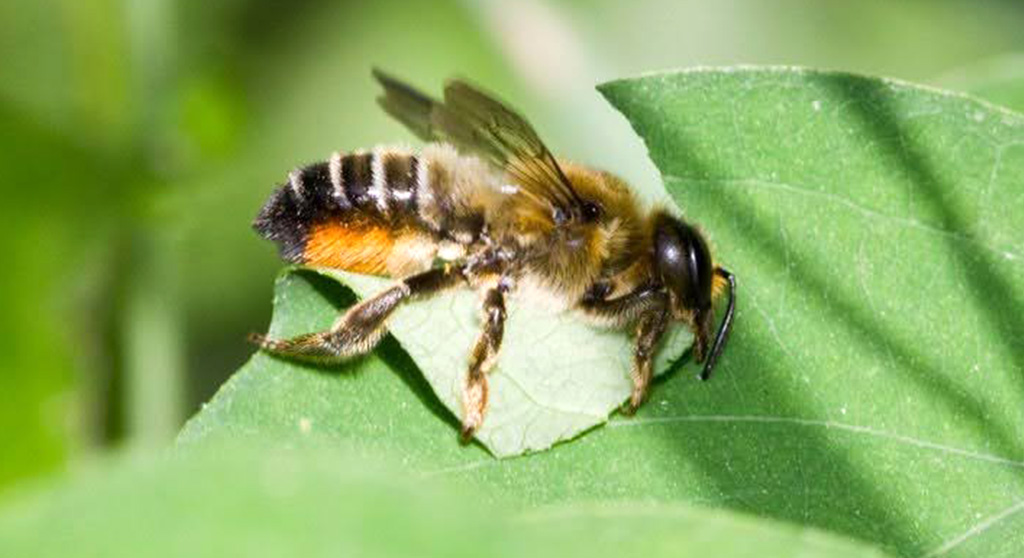 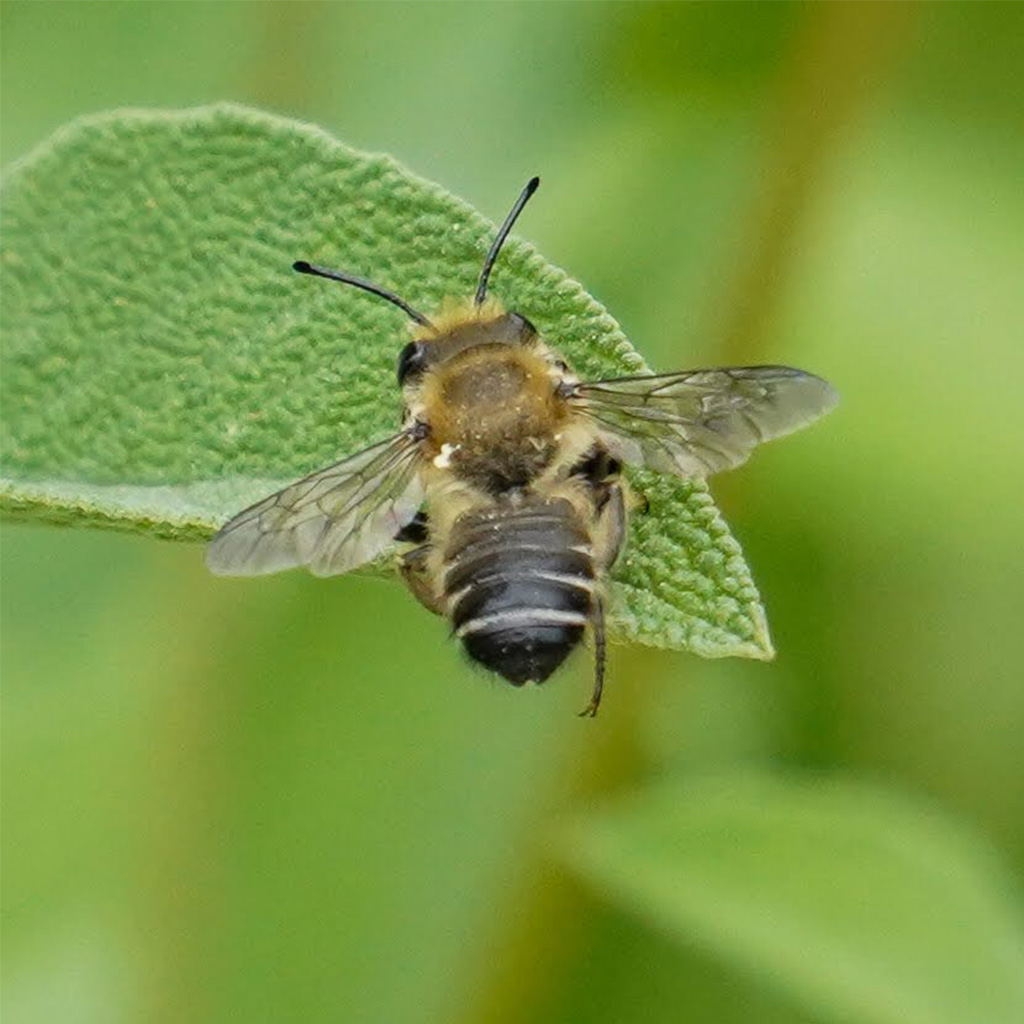 If you see a bee about the size of a honeybee but it is black instead of golden yellow, you might be spying a leafcutter bee (family Megachilidae). These are insect architects who use leaves to build long nests in which their offspring develop. There are about 131 species of leafcutter bees in North America.

Unlike most other bees, which carry pollen on their rear legs, leafcutters carry pollen on the undersides of their abdomens – you’ll see a belly covered in yellow pollen. Leafcutters are unusual in another way, too: They have a larger head than most bees because they have more-developed muscles used for chewing through tough leaves. The female leafcutter even has four teeth to help with this task! 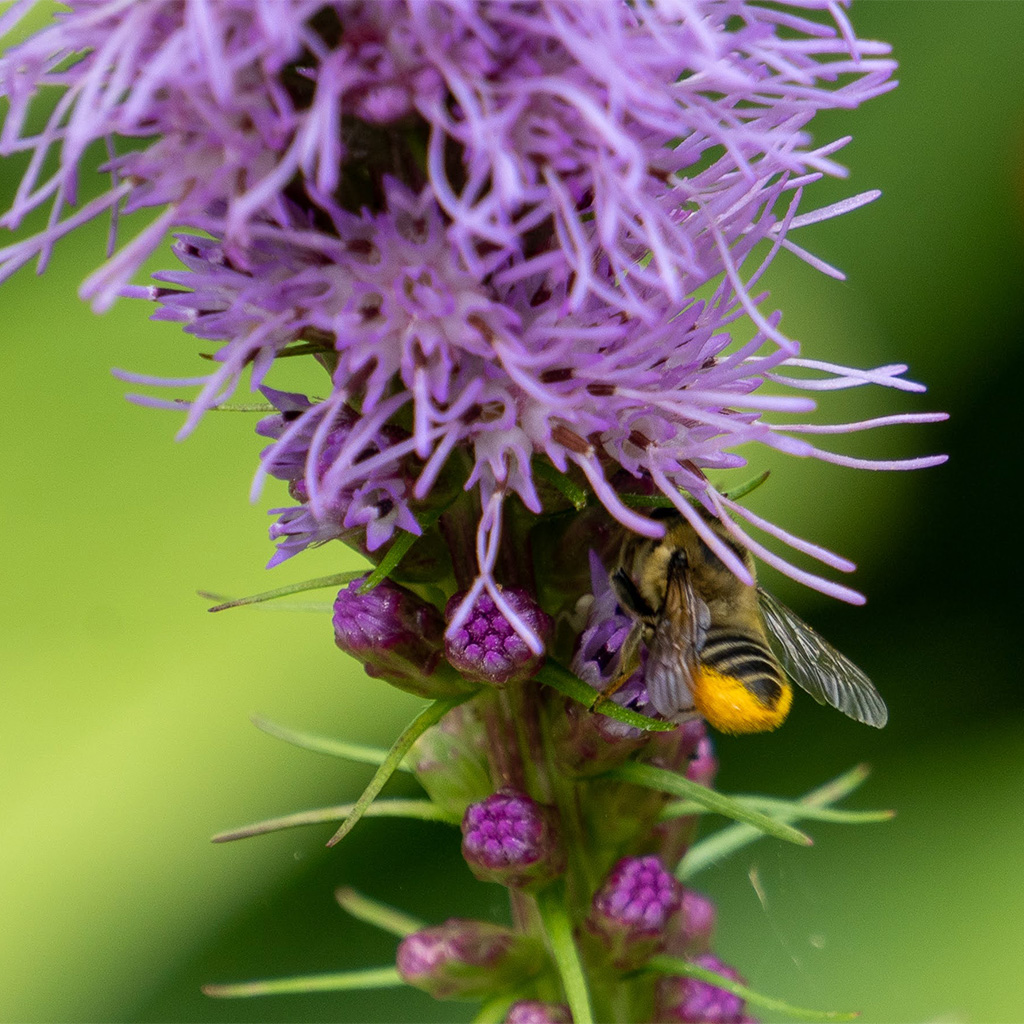 Leafcutter bees collect pollen on the underside of their bodies. (Photo: Jeanine Farley)

Leafcutters are buzz pollinators, vibrating their bodies to make flowers release pollen from anthers (the male part of the plant). Some grains land on the bee’s hairs, and the bee transfers them to the female pistil of other plants, enabling pollination in many wildflowers, fruits and vegetables; commercial growers use them to pollinate blueberries, onions, carrots and alfalfa. Because the pollen is carried underneath the bees’ bodies, it falls off easily. 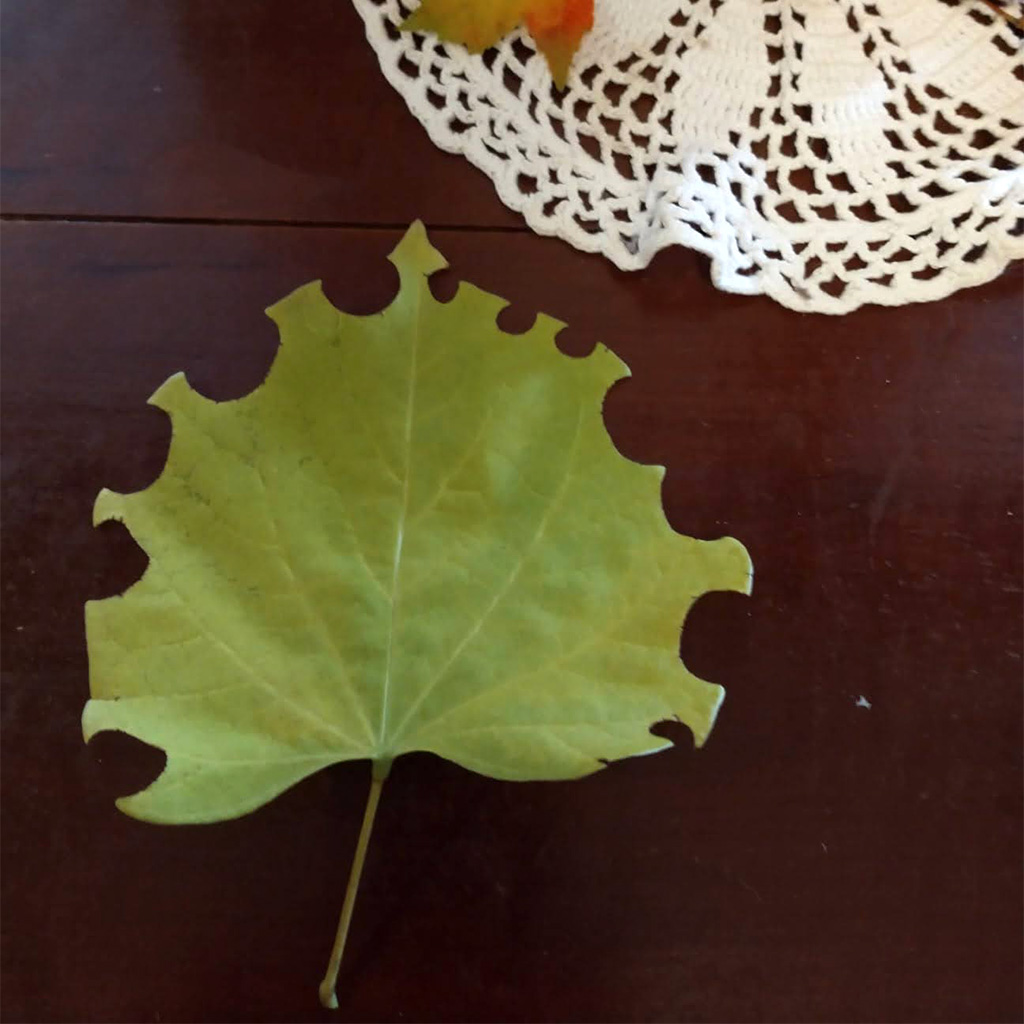 One alfalfa leafcutter bee can do the work of 20 honeybees, which are not buzz pollinators. About 150 leafcutters can provide the same pollination results as 3,000 honeybees, according to the U.S. Department of Agriculture.

Leafcutters are solitary bees that chew their way out of their nests in the spring. Males emerge first and start to patrol for females to mate with. The female lives for about two months, during which she might lay 35 to 40 eggs in several nests. 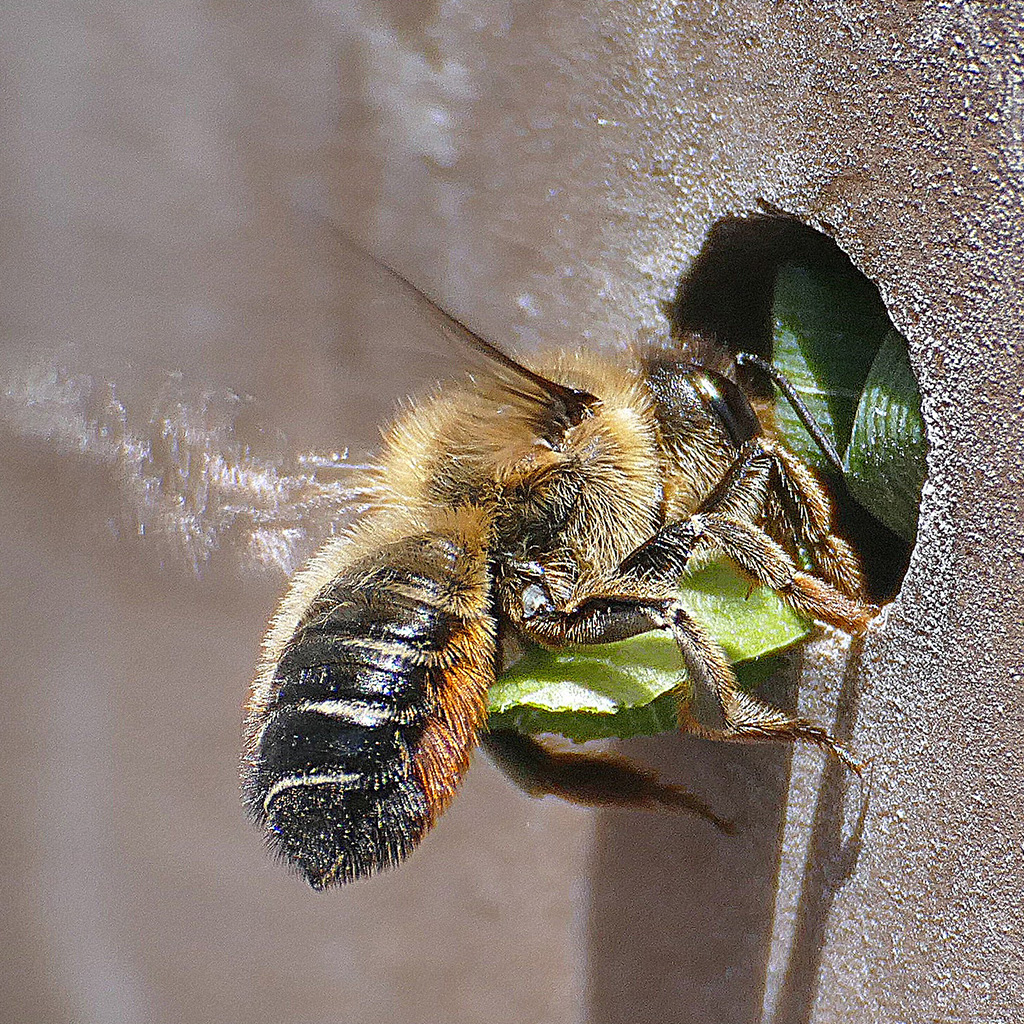 A leafcutter bee is about the size of a honeybee but is black and fuzzy rather than golden. (Photo: Jeanine Farley)

Each mated female looks for a tubular cavity in which to build. She might find such a cavity in rotting wood or a hollow stem, a concrete wall, a snail shell or a hole in the ground. On average, the tunnel is about the same diameter as a pencil.

The female chews off a circle from a thin, smooth leaf. She carries it to her nest tunnel and uses it and more like it to build a cell. When the cell is complete, she collects pollen and nectar, often from a variety of plants, that she mixes with saliva to make a pollen ball for her offspring to eat. She lays one egg in a cell, then closes it off with a round leaf door. She repeats this cell-building process until she has a long row of cells about 4 to 8 inches long – with an egg and food in each. 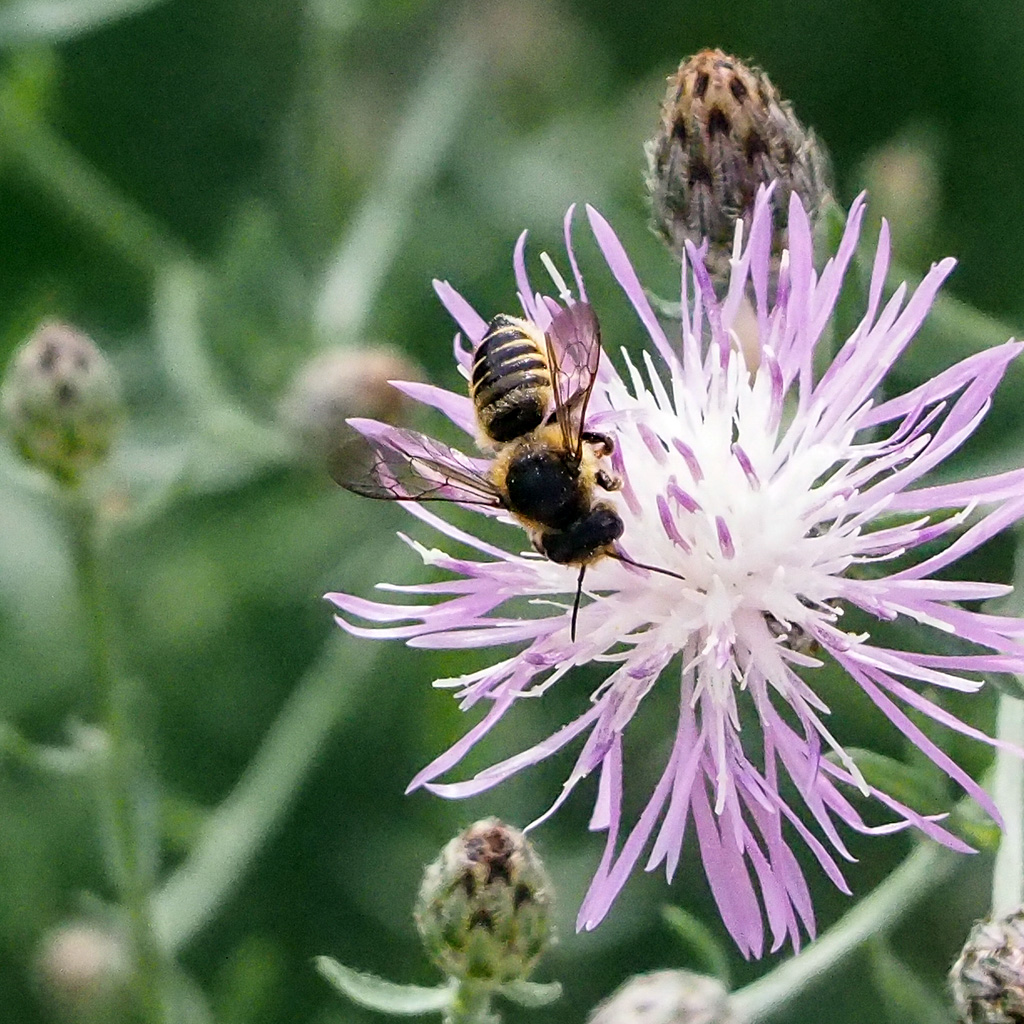 A broad-handed leafcutter bee in Cambridge in 2020. (Photo: Jeanine Farley)

Because male leafcutters emerge first, the female lays male eggs near tunnel entrances and female eggs at the rear.

When the eggs hatch, the larvae feed on the pollen in the cells. They develop into pupae that grow and develop. In most species, at the end of the season, new adult bees overwinter in the nest tunnel until they chew their way out in the spring or early summer. Then the cycle begins anew. 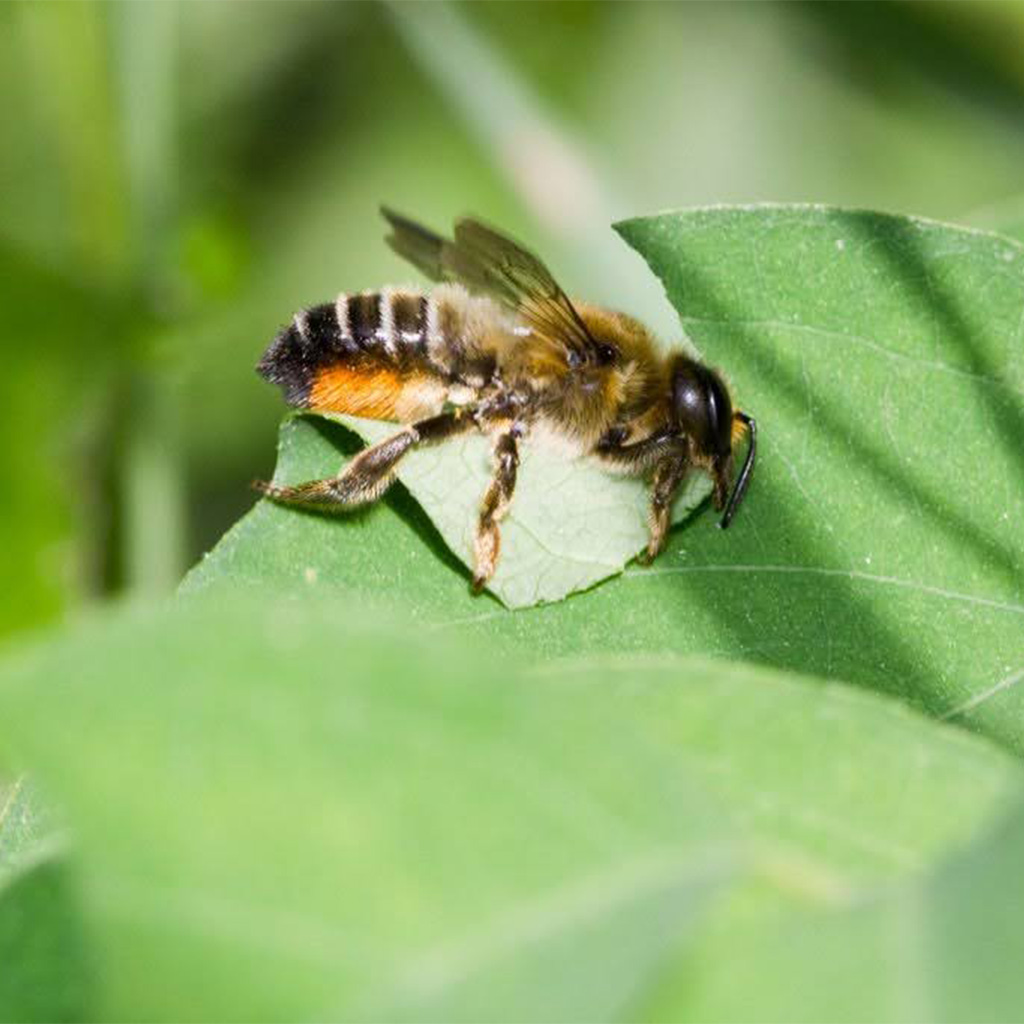 The antimicrobial properties of leaves may bestow protection to leafcutter bee eggs and larvae. (Photo: Bernhard Plank via Wikimedia Commons)

Leafcutters are not aggressive, even when you approach their nests, and sting only when handled. They don’t have much venom, so their sting is generally mild, similar to a mosquito bite (unless you are allergic, which is another matter entirely). And though they chew those circular sections from plant leaves, they take only what they need to build a nest. The plant is rarely damaged. 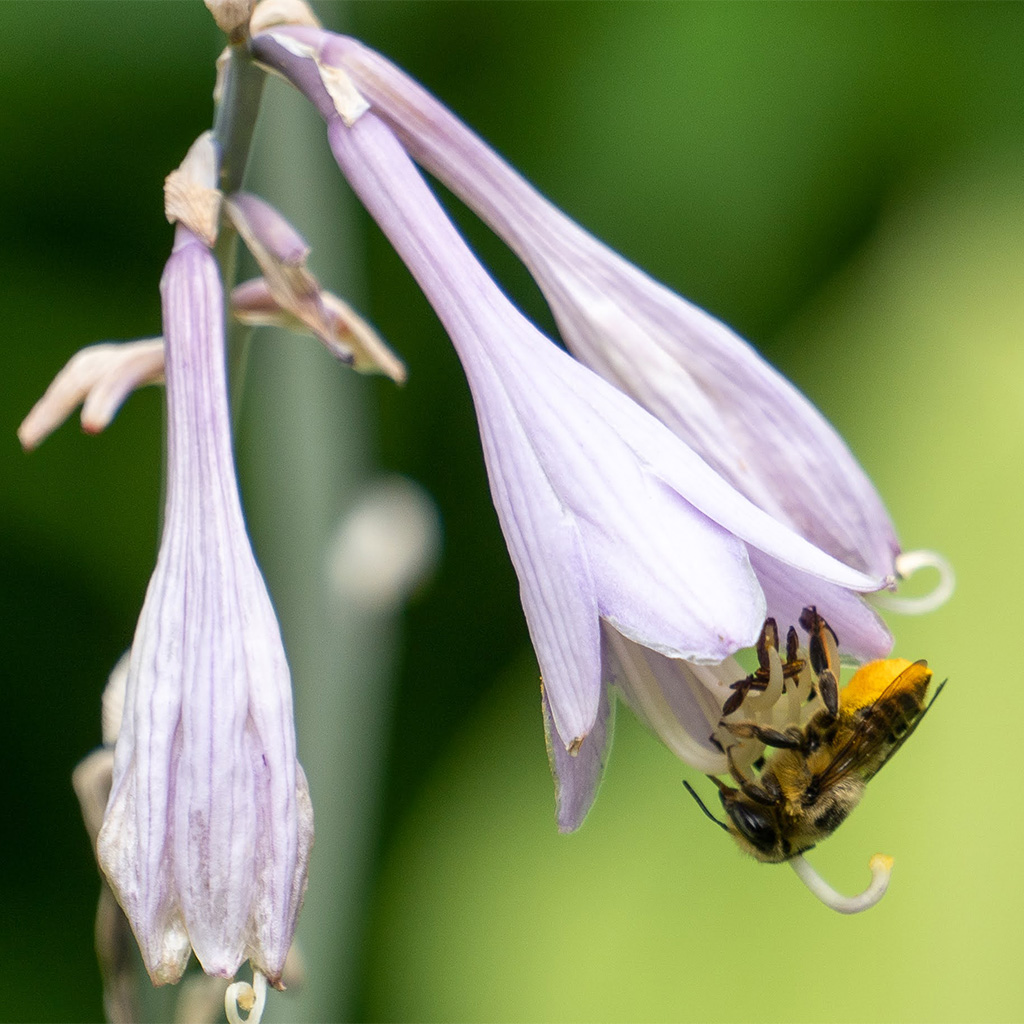 Yellow pollen collects on the underside of this leafcutter bee. (Photo: Jeanine Farley)

These bees have not been well-documented or studied, but up to 47 percent of native leafcutter species are thought to be at risk of extinction – a higher percentage than any other insect group that has been assessed.

To encourage leafcutter bees in your yard, leave some thick-stemmed plants with hollow openings, or drill some holes up to 1 centimeter in diameter in a log. Or make a leafcutter bee hotel. 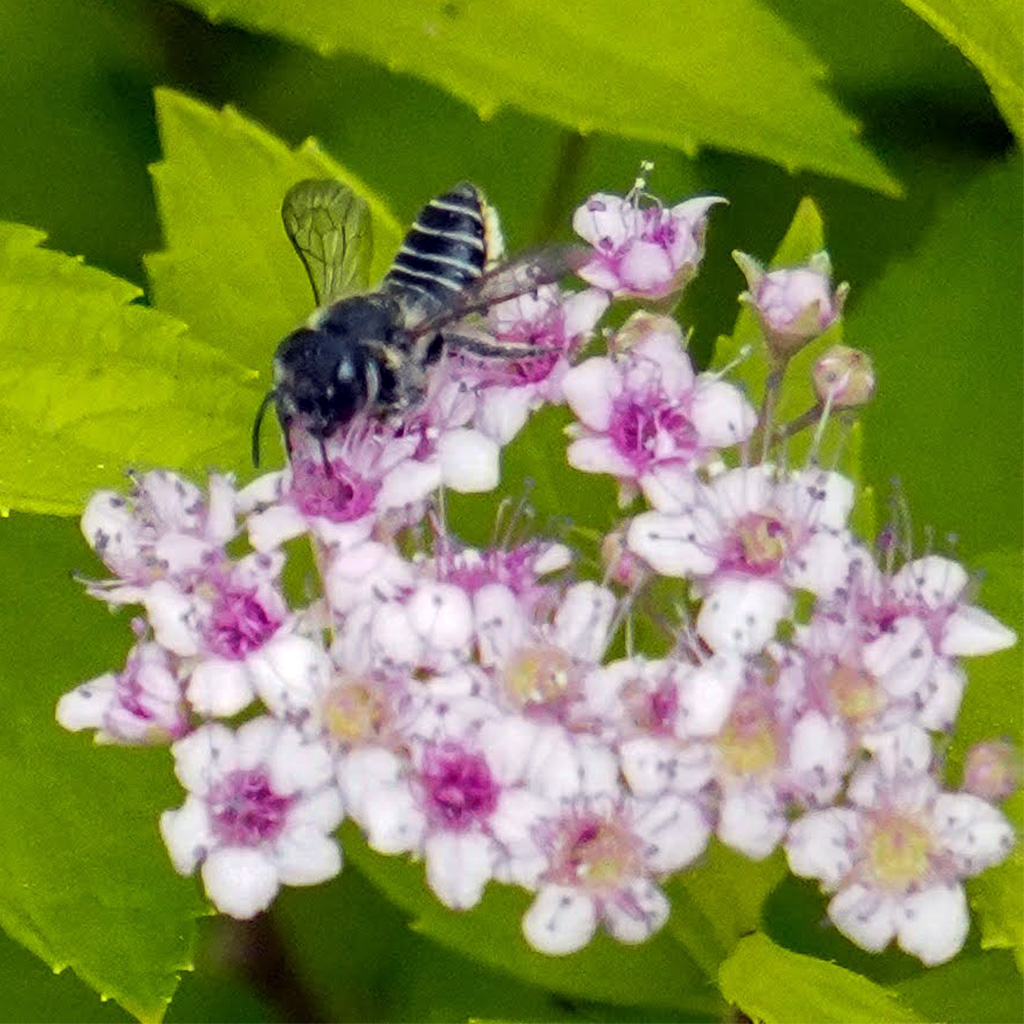