In quest to build multifamily housing citywide, there’s still debate on the scope of study needed 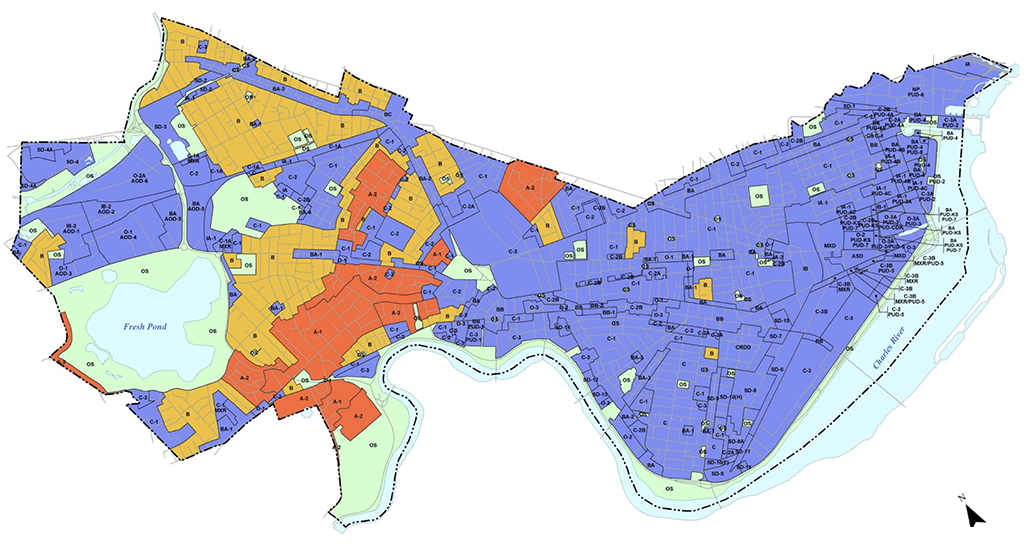 In quest to build multifamily housing citywide, there’s still debate on the scope of study needed

In this Community Development Department zoning map, the red districts allow only single-family homes, and the orange allow single-family and two-family homes and townhouses. The purple areas allow multifamily housing.

Multifamily housing – three or more units on a single property – is allowed in most parts of Cambridge, but members of the City Council’s Housing Committee think it should be allowed everywhere. Councillors, Planning Board members and Cambridge Community Development staff disagree on how to do it.

Most areas restricting multifamily housing are in the west side of the city, around Harvard Square and to its north in “A” districts that allow only single-family homes and “B” districts allowing also townhouses and two-family housing.

According to a Community Development Department presentation that included findings from the Planning Board, its members had a preferred approach of changing standards in current districts to avoid a “complete” rezoning and doing it incrementally – while prioritizing allowing more types of homes and more units. Rules regarding setbacks and parking “will need more study and discussion,” according to the board summary, and more non-zoning strategies are needed to address affordability, including subsidies.

Councillor Dennis Carlone, an architect and urban designer, said in an interview after the meeting that he is for an approach that focuses instead on “A” districts and “B” districts where multifamily housing is not allowed. If all 50 districts in Cambridge were in play, three months to a year would be needed for a study, he estimated.

A citywide approach is unrealistic, he said, and “I don’t want to set up Community Development and the Planning Board to fail.”

More housing should be developed on the Massachusetts Avenue corridor between Harvard and Porter squares, he said, and housing proportions in business districts should also be considered.

Additional rules about density and the number of buildings allowed on a property would need to be reconsidered even if a multifamily restriction is removed, according to the CDD presentation. Department head Iram Farooq and planner Jeff Robertson sought “focus” from city councillors as the hearing wound down. “If we do [citywide] analysis, it does push out recommendations,” Farooq said of the kind of broad approach suggested by the vice mayor.

Despite councillor E. Denise Simmons starting the hearing with a call to “move this process forward toward some concrete next steps” and Mallon’s sense of urgency, it ended with staff asked to consider a general question: How do we allow multifamily housing citywide, and more of it? The scope of study still didn’t seem determined as chair Burhan Azeem gaveled the meeting to an end, and he noted that some topics could be returned to at “our follow-up Housing Committee hearing.” (A policy order from Azeem and Simmons to be heard at Monday’s meeting of the City Council asks the city manager to direct Community Development to work with them “on all necessary preparations for the next meeting in the discussion.”)

Allan Sadun of A Better Cambridge, a housing advocacy organization, spoke during the meeting’s public comment section to “make sure we don’t get so lost in the weeds that we forget why this topic is so important.”

“We’re discussing building more multifamily housing citywide not because of a policy order, or because we don’t like the way certain lines look on a map,” Sadun said, “but because we’re in a housing crisis.”

He recently spoke to a person whose rent is going up 40 percent, he said.

Planning Board members also had concerns that new market-rate housing will be costly, increase demand for residential on-street parking and lower the architectural character of the city.

The board’s “zoning principles” include not having any districts limited to one- or two-family homes; allowing additional housing units; and conserving open space, trees and architectural character while considering the impacts of new measures on housing cost. Members also wanted to “limit the overburdening of on-street parking.”

Bill Boehm, a resident and architect who has volunteered with A Better Cambridge, thinks the Planning Board is out of touch.

“This board is non-representative of our city and out of step with the contemporary housing situation,” he said. “Their regressive, if not obstructionist, views will not get us where we need to be.”