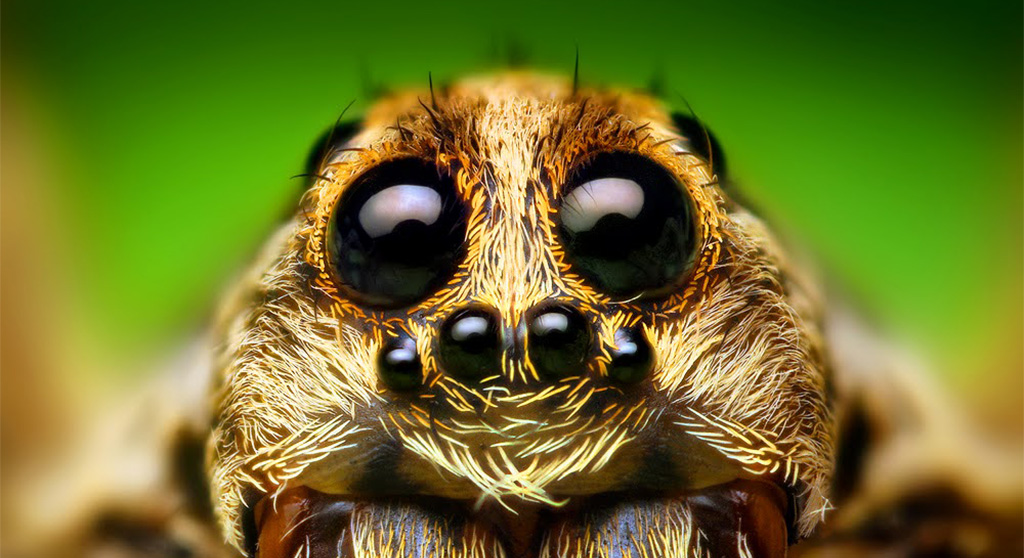 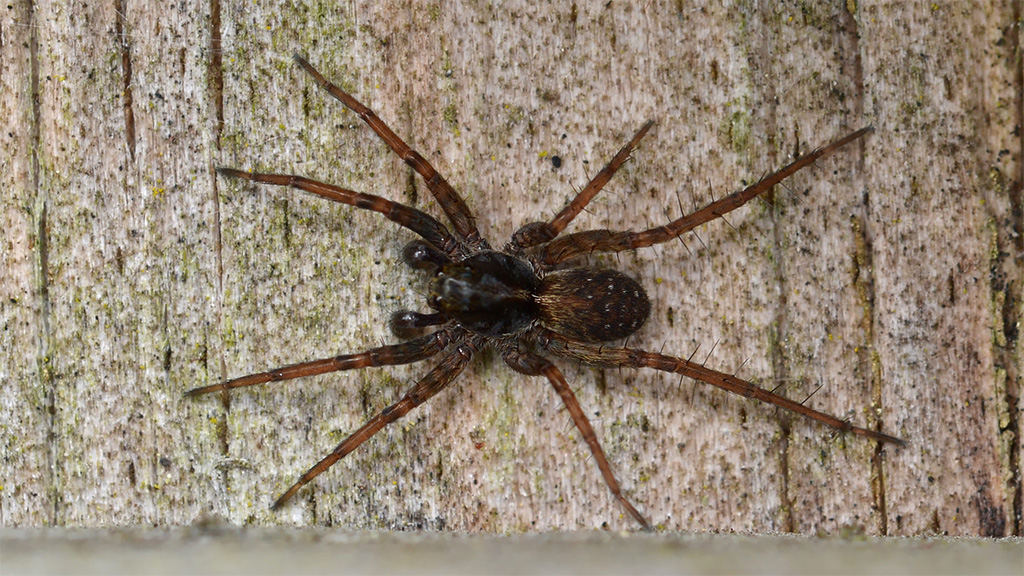 Although most wolf spiders are nocturnal, they can sometimes be seen basking in the sun to keep warm. (Photo: Ryan Hodnett via Wikimedia Commons)

Found around the world including here in Cambridge, wolf spiders are one of the most common species of spiders. Unlike many others, they do not spin webs. They live on the ground or hide under rocks, logs, leaves or plants. You might see one in your yard, garage, shed or basement. These locations are good hunting grounds for these spiders and hunting is what they do. One will lie in wait until prey happens by, then pounce like a wolf. Unlike wolves, however, wolf spiders do not hunt in packs. (A scary thought, especially as they can range from a quarter-inch to more than 1.5 inches in body size!) Most are nocturnal and therefore hunt at night.

Wolf spiders have amazing vision – and who wouldn’t with three rows of eight eyes! The bottom row has four eyes. Two very large eyes in the middle row set wolf spiders apart from other species. On top are two medium-sized eyes, farther back on the head. You might be able to spot the large eyes at night if you shine a flashlight along the ground – these spiders have tissues in their eyes that reflect light. 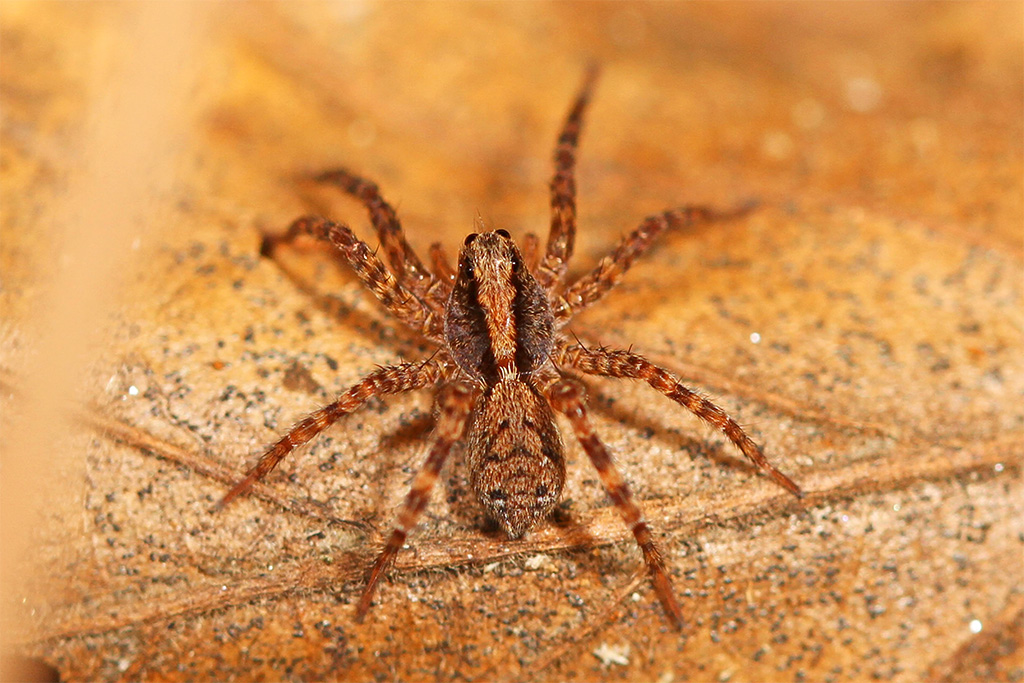 Most wolf spiders live and hunt alone; they move about in search of prey and do not have a permanent home. (Photo: Judy Gallagher via Wikimedia Commons)

Wolf spiders have spines on their slender legs to help sense prey vibrations and odors. They move fast: up to 2 feet per second to catch prey such as crickets, cockroaches, mealworms, beetles and smaller wolf spiders. They are useful predators of household and garden pests.

Male wolf spiders follow silk and use the hairs on their legs to detect pheromones to find females. During courtship, wolf spiders wave their legs or make sounds – that humans cannot hear – by vibrating body parts against each other or a nearby surface. They often thump their abdomen on the ground. 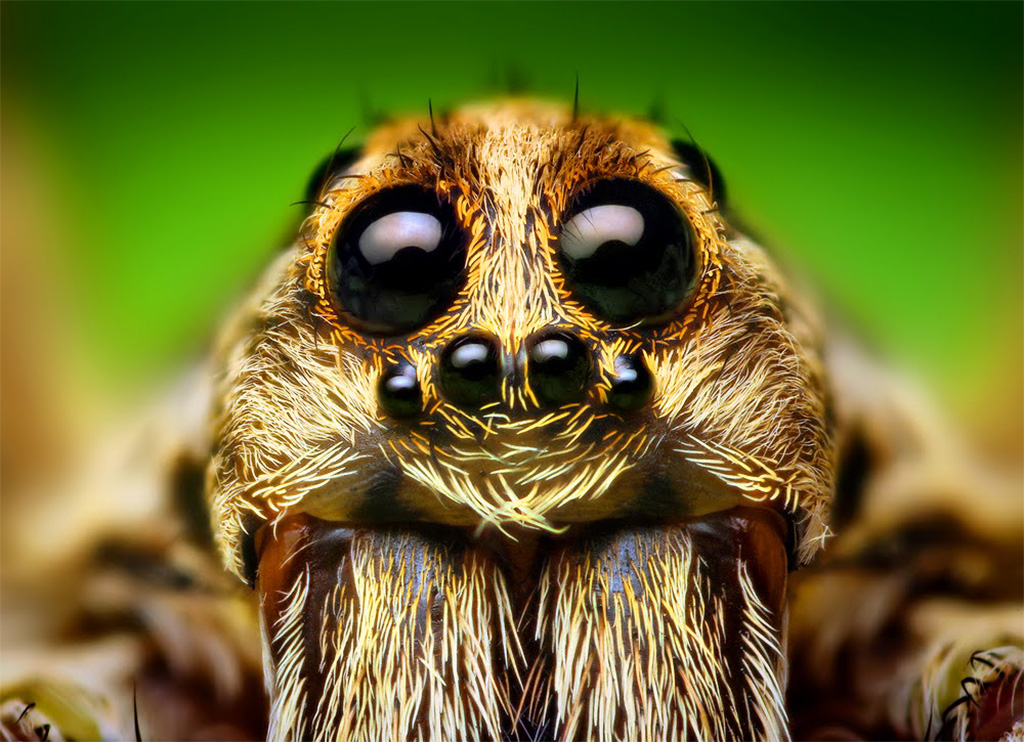 Wolf spiders have eight eyes: A bottom row of four, a middle row with two large ones and an upper row with two angled ones. (Photo: Thomas Shahan via Wikimedia Commons)

Although wolf spiders might seem heartless, the female is a devoted mother. In May or June, she builds an egg sac by making a disc of silk with her spinnerets (the silk-spinning organs). She places this disc on the ground and lays about 48 eggs in the center, then spins another disc on top and connects the two to form a sac.

She carries this egg sac under her abdomen into the summer as she hunts, often raising her abdomen to avoid damaging it. She might move the sac into or out of the sunlight to control the temperature of the developing eggs. When the babies are mature, the female tears open the sac with her jaws to allow the youngsters to emerge. The spiderlings climb up onto the mother’s back, sometimes stacked in several layers, for a week or two, until they complete their development and are large enough to hunt for themselves. 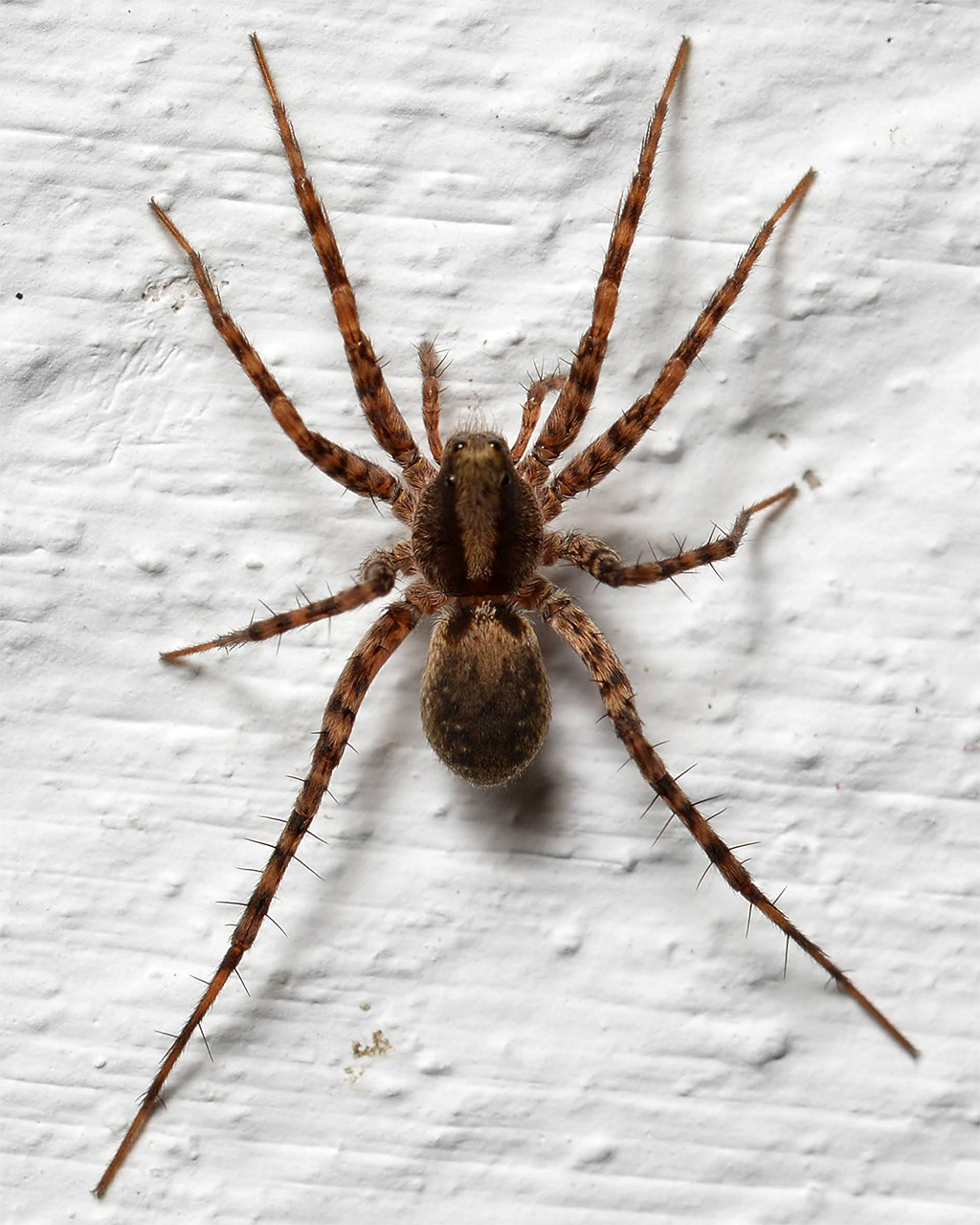 Thin-legged wolf spiders have hairs or spikes on their legs that protrude to help them sense vibrations and odors. (Photo: Ryan Hodnett via Wikimedia Commons)

These littlest may spread to new territories by ballooning, or releasing fine strands that are caught in thermal updrafts and carry them away. The spiders have no control over where they land – they may land inches or miles away. These young spiders feed and overwinter in suspended animation until spring, when they begin hunting again. They reach adulthood that summer.

Wolf spiders are solitary and reclusive, preferring to remain out of sight to hunt. They do not stalk prey, but instead wait patiently for it to appear, then they dash rapidly after it. They use vibrations as well as sight to hunt. A person unaware of a stationary, camouflaged wolf spider, may be startled when it suddenly scurries after an insect in their basement when they are trying to do laundry or retrieve snow shovels. 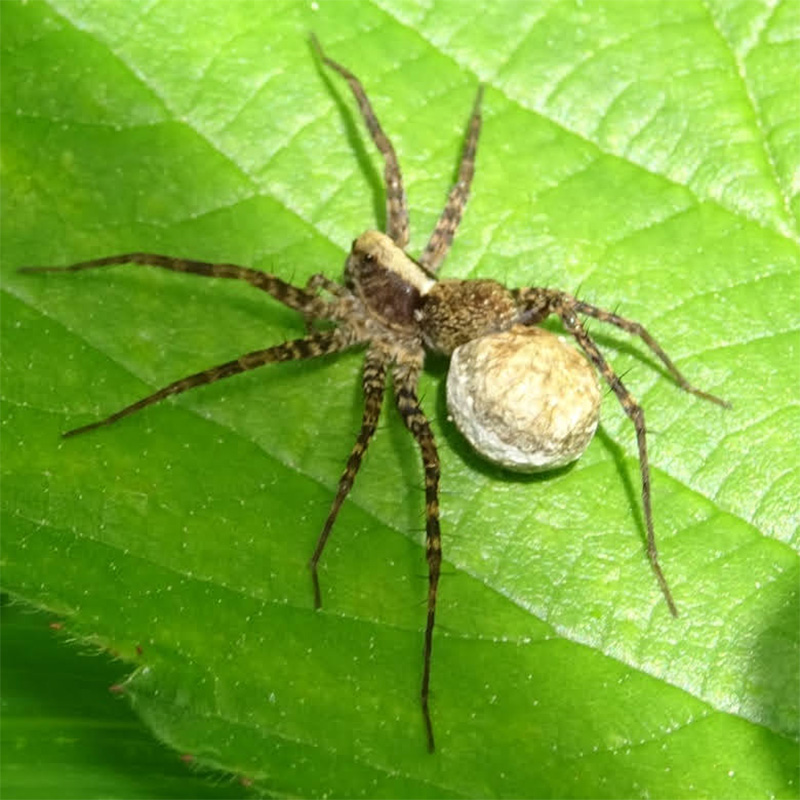 A wolf spider spotted in June carries an egg sac under her abdomen. (Photo: Juplauris via Wikimedia Commons)

Wolf spiders bite small prey immediately. They enclose larger prey in their legs and bite and eat it. Wolf spiders bite humans only as a last resort, when they feel that they cannot escape. A bite will cause you swelling and itchiness at the site for a few days, but the venom is not poisonous.

In the winter, most wolf spiders hibernate in a warm place, so you might find that you have an eight-legged visitor in your shed. Although these wolf spiders may look scary, they are just trying to survive, and since they keep insect pests at bay, it’s probably best to leave them alone so they can patrol the area once the weather warms in spring.