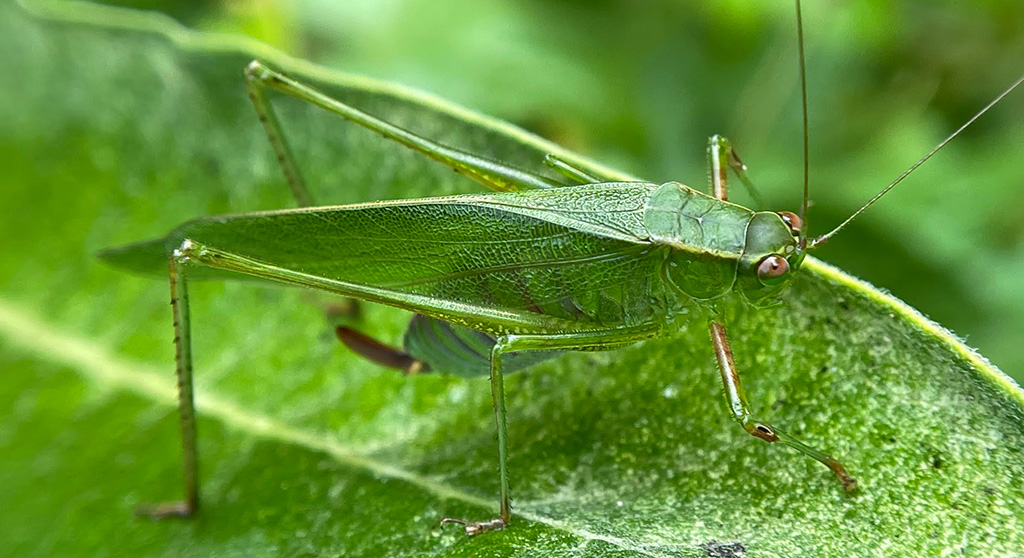 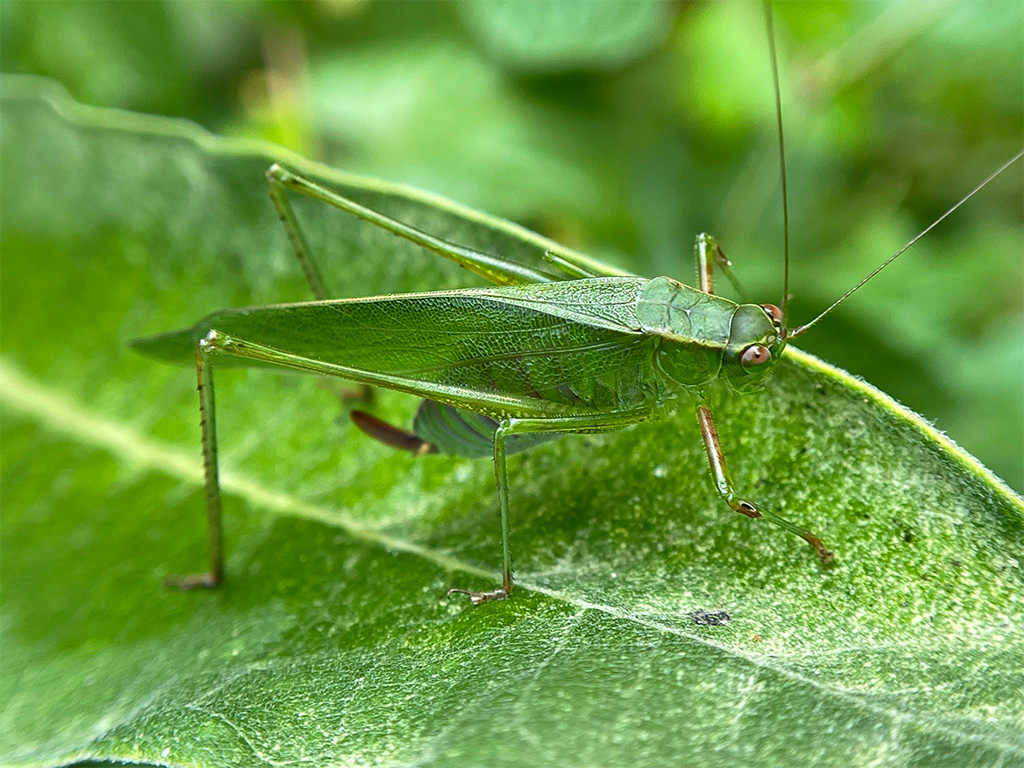 A fork-tailed bush katydid. Katydids fold their wings over their body, forming a shape similar to the roof on a house. (Photo: Joe MacIndewar)

Katydids are green insects camouflaged to look like leaves and often found at the tops of trees. It is not surprising, then, that katydids are more often heard than seen.

Their name originated here, as the common true katydid is native to eastern North America; it is said that the loud night choruses of katydids frightened early Pilgrims, who had never heard such rasping sounds. 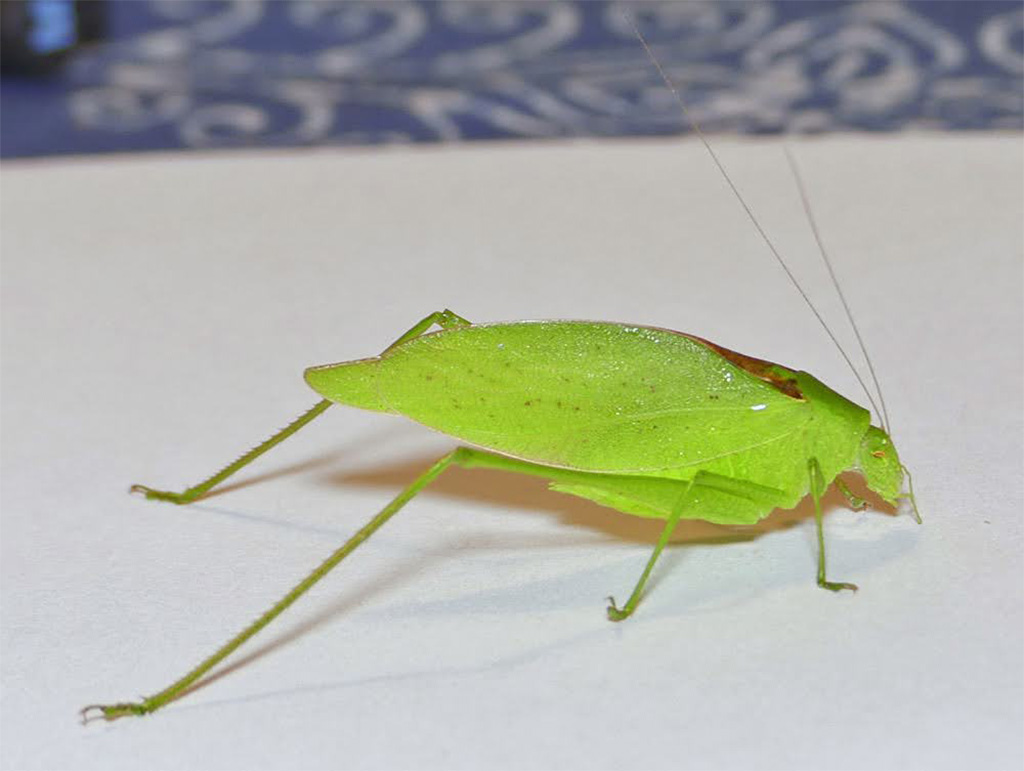 Katydids, such as this round-headed one, have thin antennae that are as long or longer than their body. (Photo: Norm Levey)

Those large forewings you see on katydids cannot help them fly, but when rubbed together make a loud, unmistakable ch-ch sound that are used to sing from dusk into the night. Though in some groups the sexes form duets, males are usually responsible for these songs – they call to attract females. In Massachusetts, this usually begins in early August. Females select healthier males, judging their fitness by the sound of their call (the louder the better).

Katydids produce sounds by rubbing the hard edge of one wing against ridges on the other. Think of the process as dragging your finger across the teeth of a comb. Each species of katydid produces its own songs. In our area, the common true katydid sings songs made up of two, three, or four pulses (often compared to the sounds ka-ty or ka-ty-did or ka-ty-did-n’t). 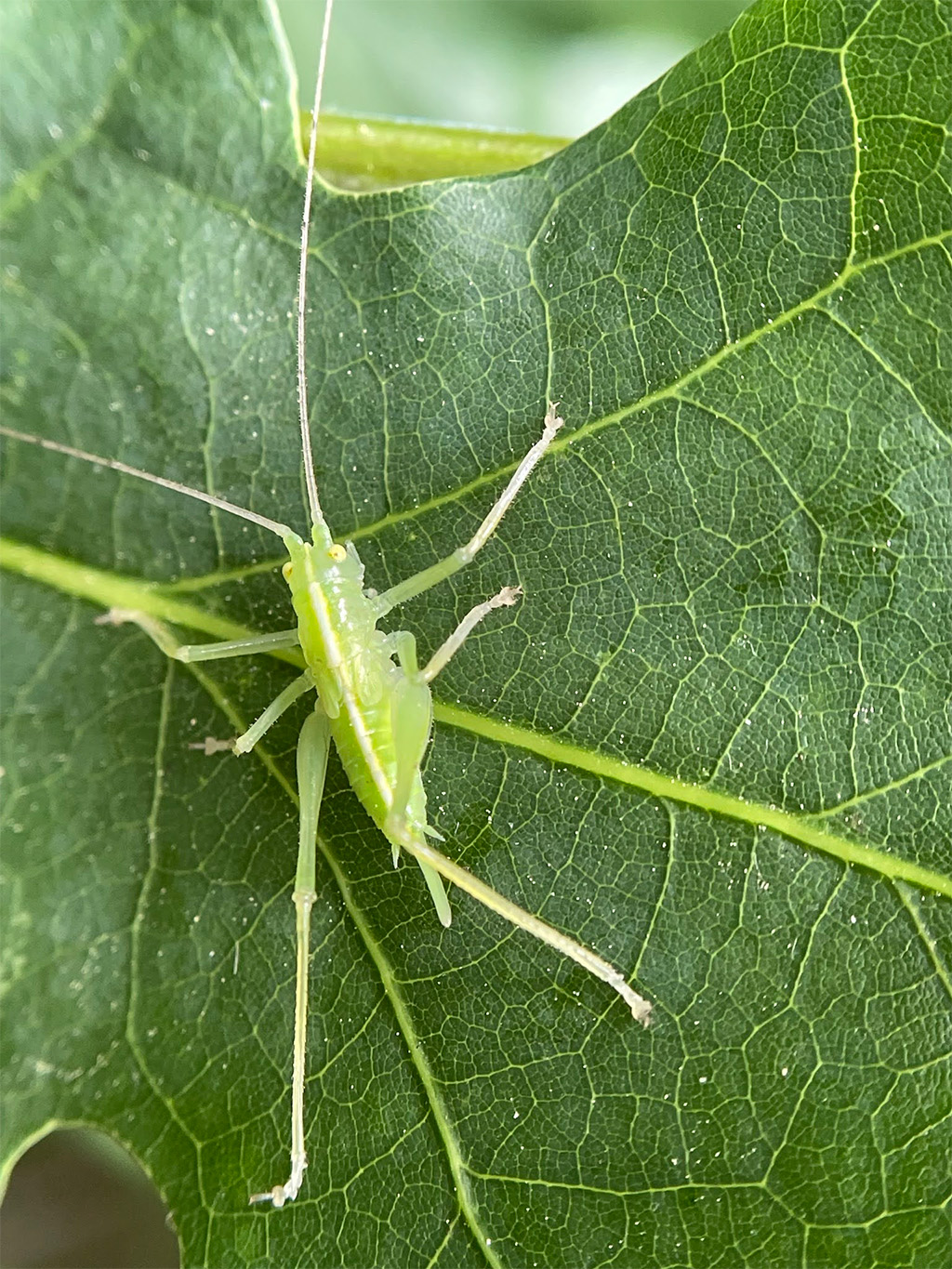 A drumming katydid. Although katydids are related to grasshoppers, they are more closely related to crickets. (Photo: Joe MacIndewar)

As temperatures fall in the autumn, katydid songs become slower and usually end by October; if you are lucky enough to hear them at night, enjoy what is left of this year’s serenade.

A Tufts physics professor, Amos Dolbear, published an article in 1897 called “The Cricket as a Thermometer,” in which he reported: “The rate of chirp seems to be entirely determined by the temperature and this to such a degree that one may easily compute the temperature when the number of chirps per minute is known.” He wrote a formula to express this relationship. Since chirping rates vary by species, he later developed a formula for the common true katydid, too:

T = 60+[(N–19)/3], where N is the number of katydid chirps per minute and T is the temperature in degrees Fahrenheit.

Dolbear wasn’t the first to notice the relationship between cricket chirps and temperature. Sixteen years before Dolbear published his formula, a woman named Margarette W. Brooks of Salem published a letter to the editor called “Influence of temperature on the chirp of the cricket” in Popular Science Monthly. She wrote:

Recently, a writer in the Salem Gazette … gives the following rule for estimating the temperature of the air by the number of chirps made by the crickets per minute: “Take seventy-two as the number of strokes per minute at 60-degree temperature, and for every four strokes more add 1 degree, and for every four strokes less deduct the same.” … I determined to … find out if this were an invariable rule. I tried it … every night that the crickets chirped, from September 30th to October 17th.

Her published data show a similar relationship to the one Dolbear later noticed. 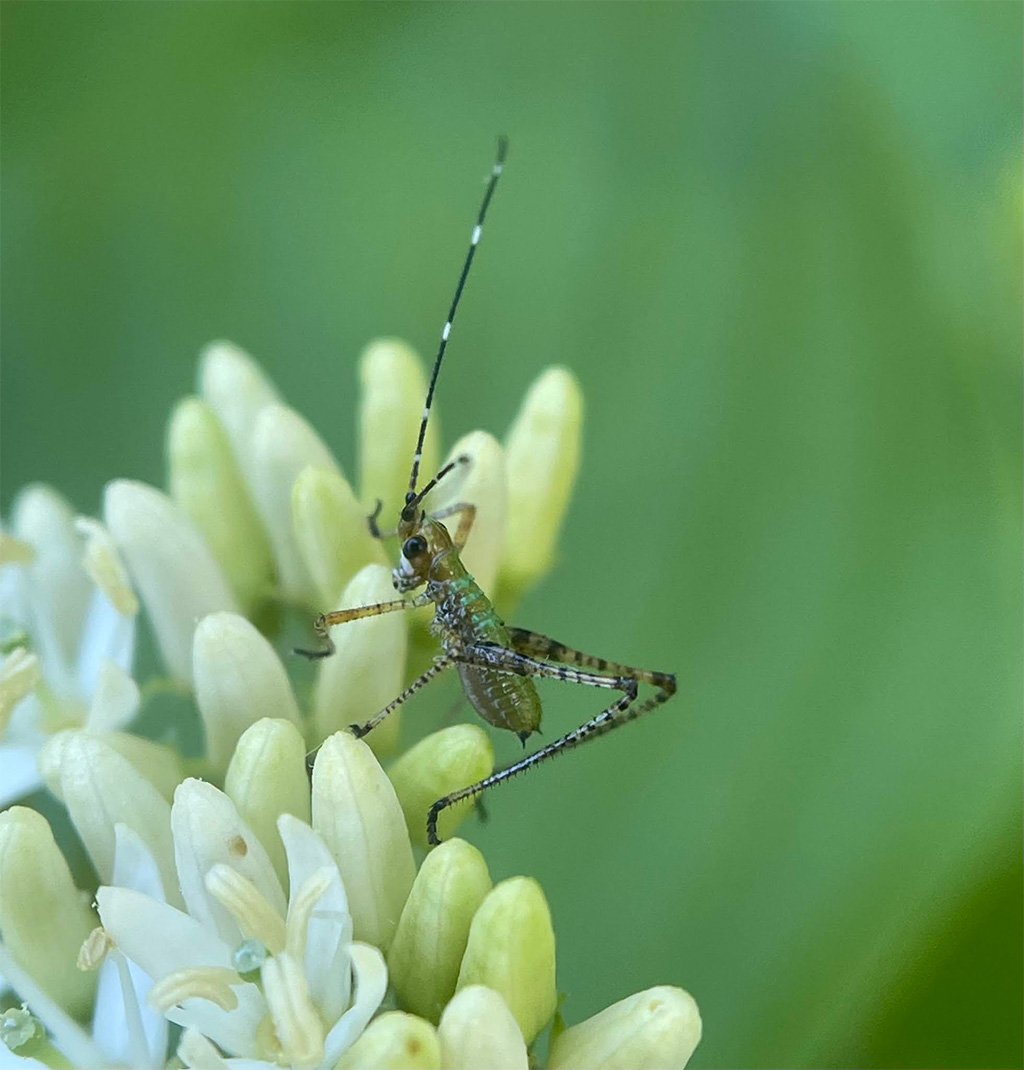 A Scudder’s bush katydid nymph. The hind legs are longer than its others, making katydids good jumpers. (Photo: Joe MacIndewar)

While common true katydids usually perch high up, during breeding season they might drop to the ground looking for a mate.

When the insects mate, the male passes to the female a sperm packet, called the spermatophore. Males increase their chance of being chosen by a female if they provide additional protein – a nuptial food gift attached to their sperm packet. The female eats it to help her eggs develop. Males that produce large food gifts mate only one or two times in their short life, because it takes up to 40 percent of their body weight to produce one gift. Males that produce smaller gifts can mate two or three times per night, but they are less likely to be chosen by females. 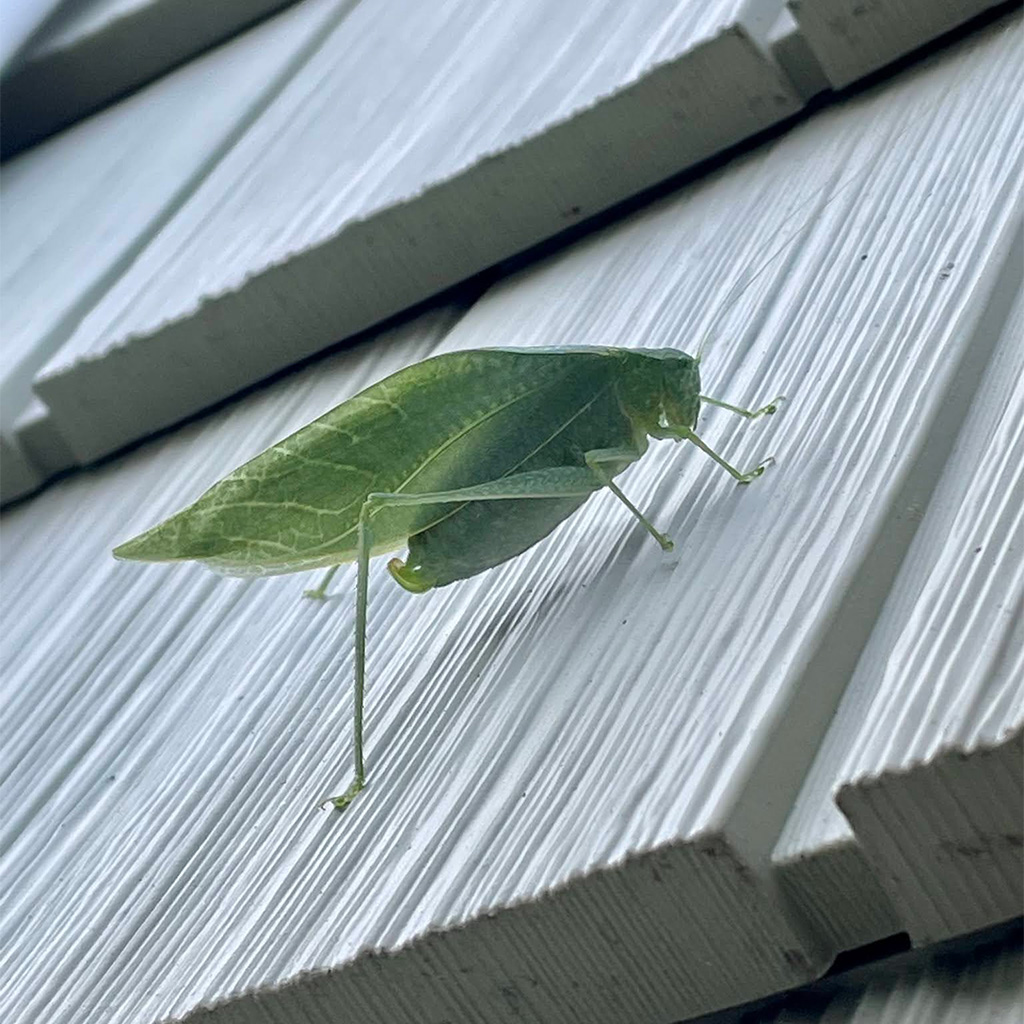 A greater anglewing katydid is camouflaged to blend in with leaves. (Photo: Joe MacIndewar)

In late summer or fall, female katydids lay eggs in crevices in tree bark, in soil, or in plant stems. The eggs overwinter, which is a good thing, because the adult katydids die off. The eggs are all that is left to continue the species.

Katydid nymphs hatch from the eggs in spring. These nymphs eat foliage but rarely cause significant plant damage. Many species climb into the tree canopy, where they feed on leaves until they are adults. The nymphs look like small, wingless adults. Katydids go through five molts, shedding their exoskeleton each time as they grow. Their wings gradually appear, finishing when they are complete adults. Adults do not grow anymore. 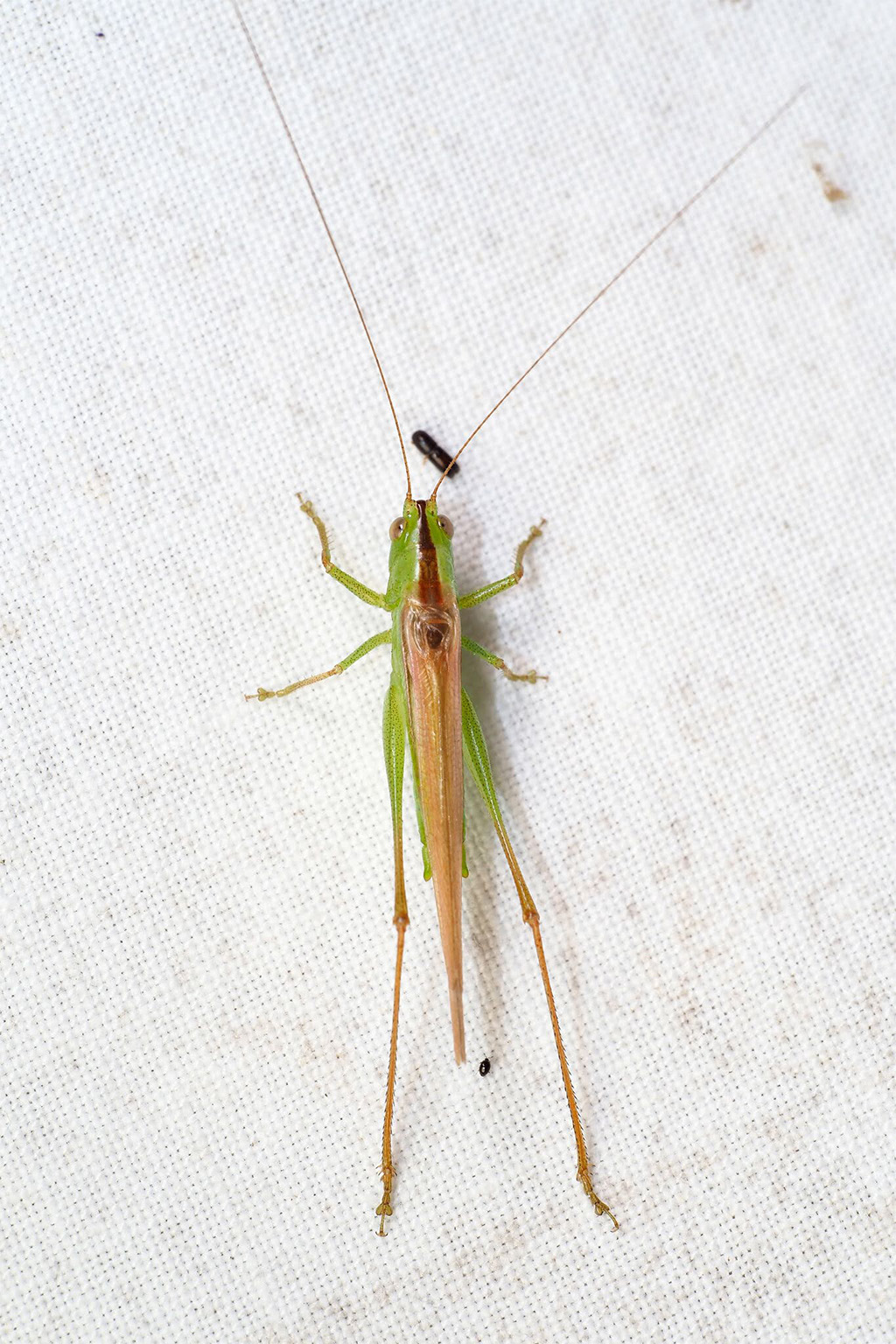 Most katydids are nocturnal, so they use their antennae, which are covered with sensory receptors, to find their way around. Adult katydids are one-half to 4 inches long, depending on the species. Many species are leaf-shaped and rest during the day in a posture that mimics a leaf. This helps them blend in and avoid predators.

There are more 8,000 species of katydids in the world, many in the tropics, but not as many in North America. Katydids do not bite if you handle them, but they might squawk. When disturbed on a branch, they might leap and flutter to the ground – most katydid species are not good fliers – walk to a nearby tree and climb back up. 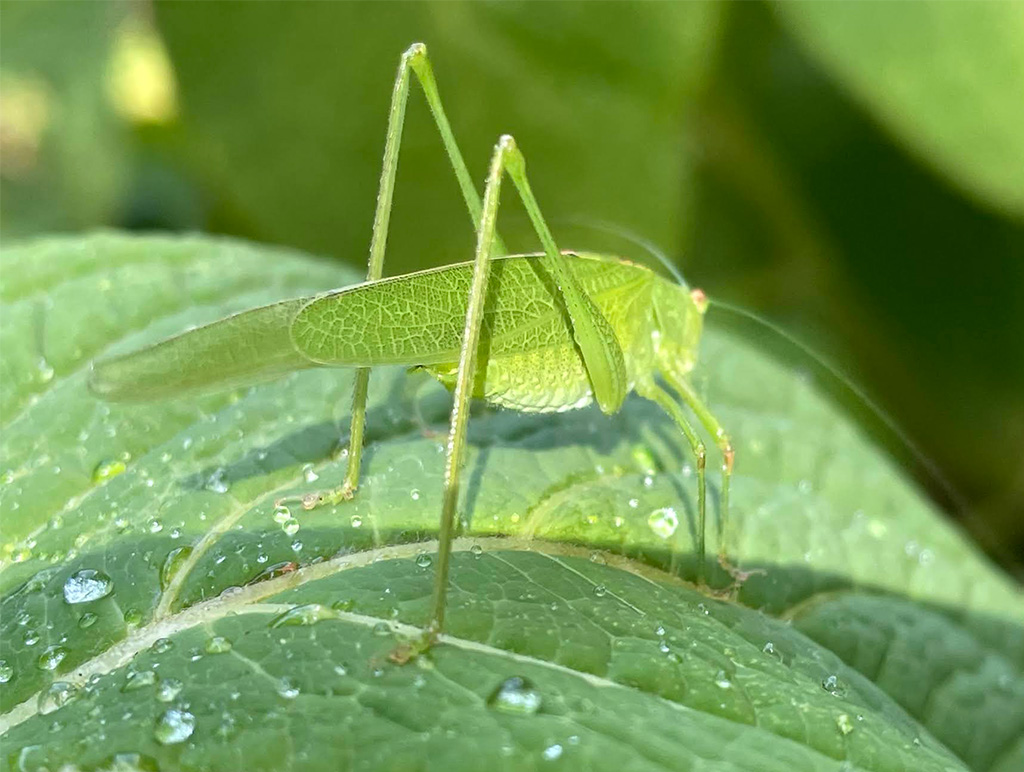 A Mediterranean katydid. Katydids have hearing organs much like human ears – but on their forelegs. (Photo: Joe MacIndewar)

Katydids are an important food for many animals, including birds, bats, rodents, tree frogs, spiders and praying mantids. Katydids are not endangered, although some have become rare because they need a specific habitat or food plants. Wherever there are leafy plants, however, there are likely to be a few katydid species around. Even if you do not see them, you might be able to hear them at night in late summer if you listen. 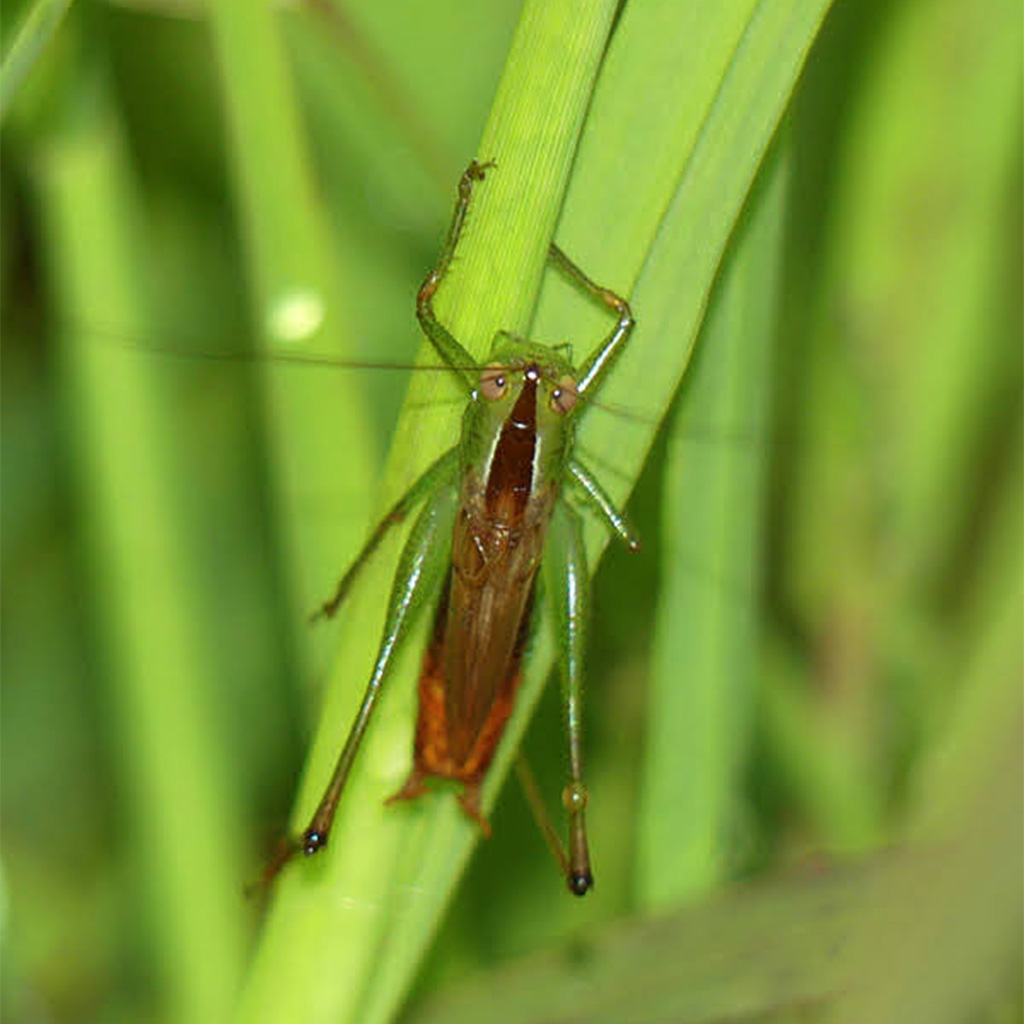 A short-winged bush katydid. You can tell a katydid from a grasshopper because katydids have long antennae; on grasshoppers, they’re short. (Photo: Norm Levey)