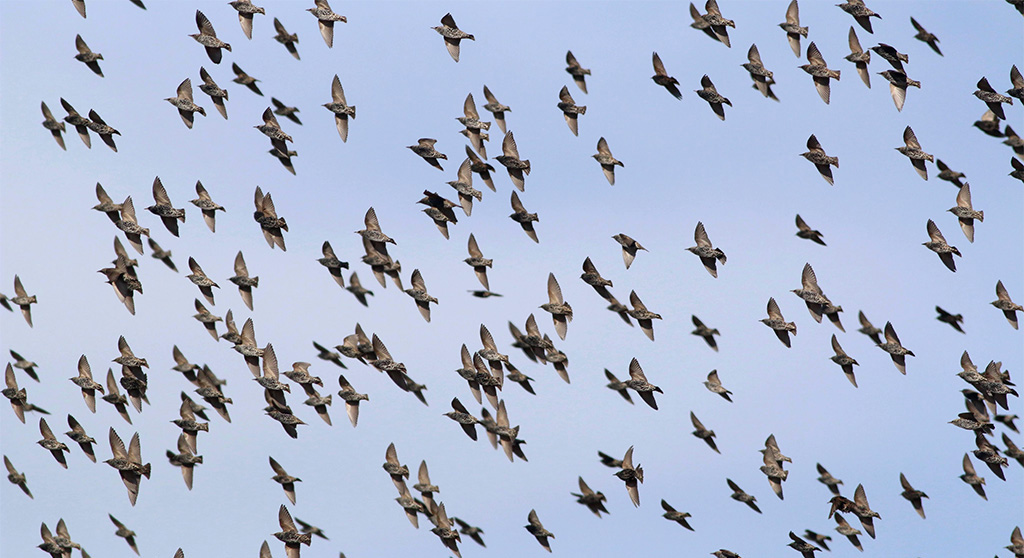 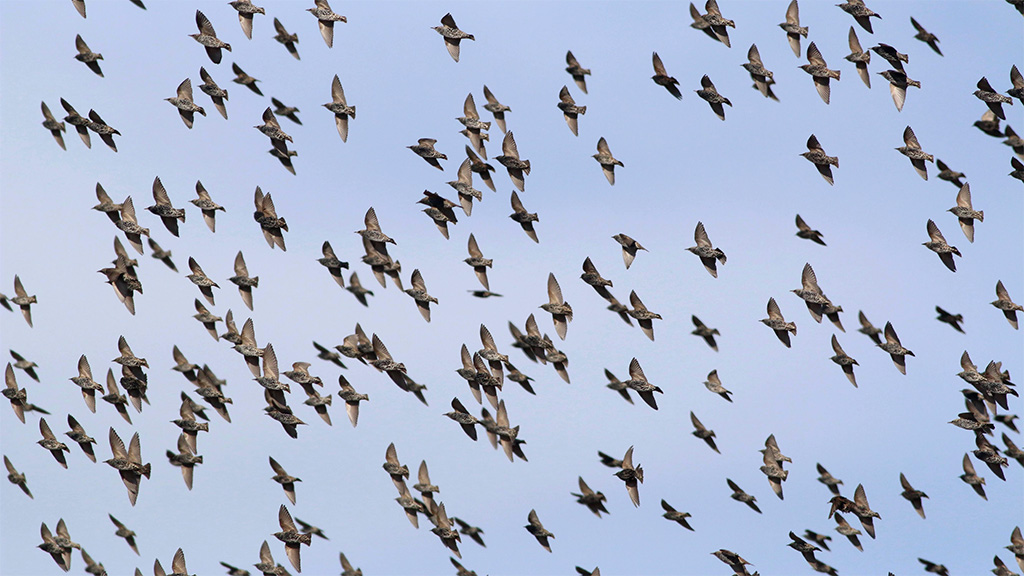 A large flock of starlings is called a murmuration. (Photo: Brian Rusnica)

You may have read that on Oct. 5, a Delta flight from Boston to Fort Lauderdale, Florida, hit some birds on takeoff and was forced to return to Logan. No passengers were hurt, and the plane landed normally and taxied back to the gate. Mechanics inspected the plane and the flight was rescheduled for 3 p.m. that same day.

Because airports today know how to manage bird populations, events such as this are extremely rare; when they do occur, the risk is minimized because the number of birds near airports is low and aircraft are built to withstand bird impacts or ingestion into their engines. 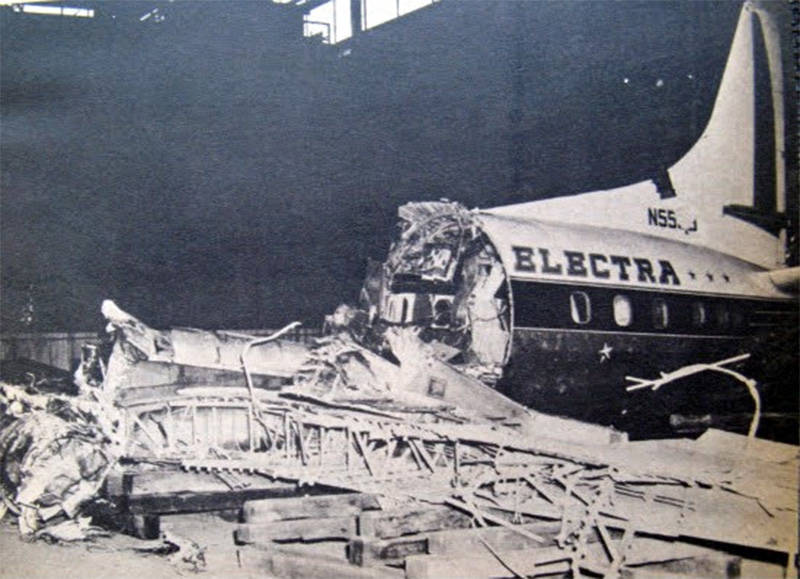 In 1960, a flock of starlings caused Eastern Airlines Flight 375 to crash into Winthrop Bay. (Photo: Civil Aeronautics Board)

But 62 years ago, on Oct. 4, 1960, the most deadly bird air strike in U.S. history occurred right here at Logan Airport. A flock of approximately 20,000 starlings flew in front of an Eastern Airlines Lockheed L-188 Electra turbo-prop airplane within seconds of takeoff. Dozens of the starlings were ingested into three of the four engines as the plane took off from Runway 9. Two engines lost power. A third flamed out. Flight 375 rolled over and crashed into Winthrop Bay. Sixty-two of the 72 people on board died.

“My friends were all on the beach at the base of Woodside Park that late afternoon. We stood still and watched the big Electra drop out of the sky, right in front of us. It made a huge steam splash as it hit very close to the No. 2 red buoy of the Cottage Park Club. We ran out on the flats to help,” one eyewitness said. 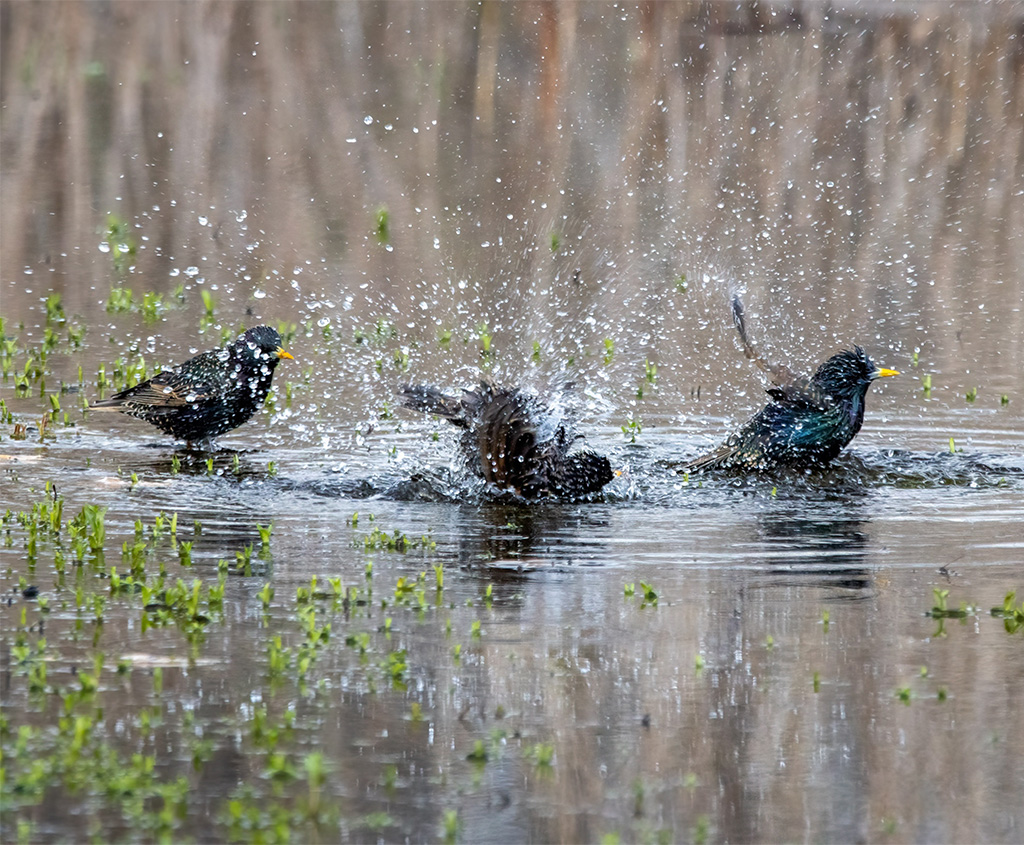 The survivors were all in the airplane’s rear section, which broke off from the rest of the fuselage. The seats and the seat belts broke, too, allowing these 10 people – nine with serious injuries – to surface and be rescued by boats. The rest of the plane was destroyed and broke apart on impact. More people probably would have survived the crash if it were not for the poorly designed seats, which detached from the airplane floor mounts and tipped in the bay to float upside down, causing the strapped-in occupants to drown. According to The Boston Globe, “only two seats in the entire plane remained attached to the floor. All the rest were ripped away.”

The Civil Aeronautics Board conducted a review of the incident and concluded:

A few seconds after becoming airborne, the aircraft struck a flock of starlings. A number of these birds were ingested in engines Nos. 1, 2 and 4. Engine No. 1 was shut down and its propeller was feathered [the pilot turned the fan blades to eliminate drag]. Nos. 2 and 4 experienced a substantial momentary loss of power. This abrupt and intermittent loss and recovery of power resulted in the aircraft yawing to the left and decelerating to the stall speed … the left wing dropped, the nose pitched up and the aircraft rolled left into a spin and fell almost vertically into the water.

After the crash, investigators found the remains of approximately 75 starlings scattered on the left side of Runway 9. They also found starling remains and feathers in three engines of the plane. Investigators later conducted tests, which involved firing living starlings into the spinning blades of Electra engines; the investigators ascertained that indeed starlings could have caused the plane to crash:

The Civil Aeronautics Board also used a flight simulator to recreate what occurred during the brief flight. More than 60 pilots tried to fly and land the plane under these conditions. All failed. 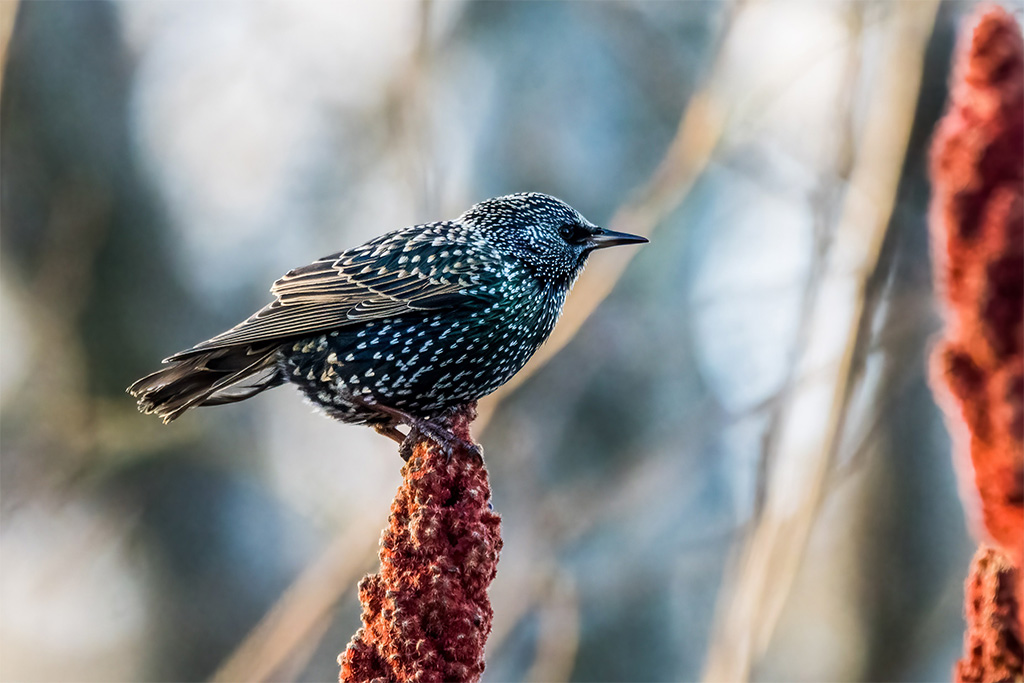 A starling in its winter plumage alights in Huron Village. (Photo: Richard George)

The good news is that officials learned a great deal from this accident, and U.S. airports today have wildlife hazard management programs in place to ensure that incidents like this do not occur again. Part of that work is to reduce flocks of birds such as starlings near airports by having airport wildlife management crews remove food and water sources, as well as nesting sites. Also because of this accident, regulators developed minimum ingestion standards for propellor planes and later for modern jet airplanes. Today, rather than using living birds, engineers test jet engines using gelatin blocks that mimic bird density. 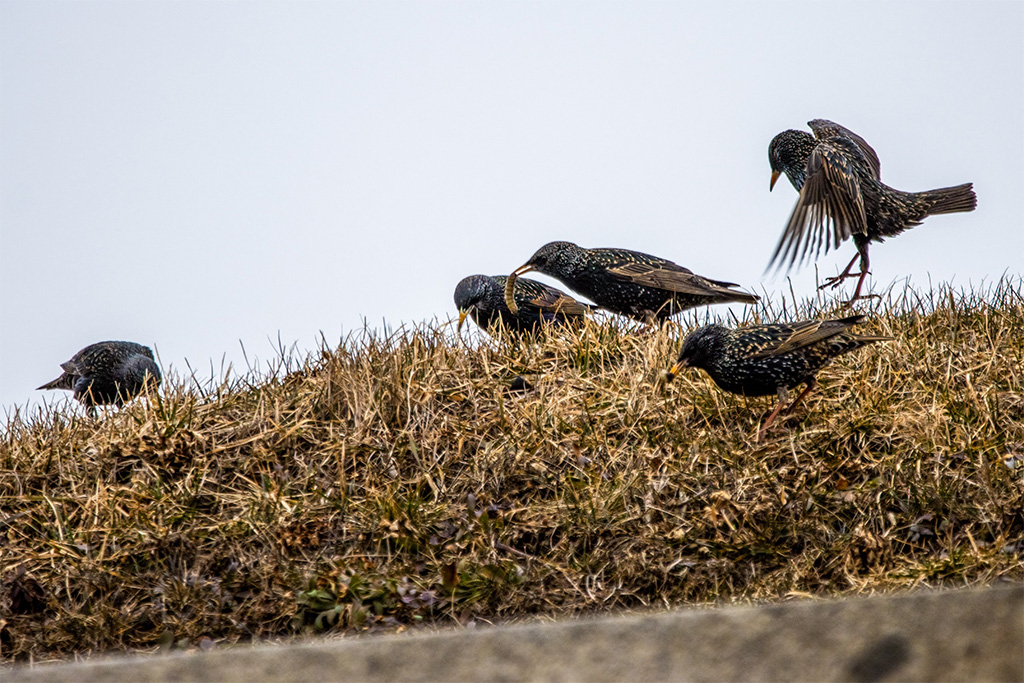 Flocks of starlings forage in fields or lawns, poking their bill into the ground to search for insects. Starlings also eat fruit and grains, seeds and garbage. (Photo: Richard George)

Bird strikes have been occurring as long as there have been airplanes. In 1905, Orville Wright hit a red-winged blackbird while flying above a Dayton, Ohio cornfield. In 2019 there were about 17,228 wildlife strikes, 97.5 percent of which were birds, at 753 U.S. airports. If my calculations are correct, this means there were on average about 47 bird strikes per day. Most of these incidents were not serious, of course. In 2012, a plane carrying Joseph Biden struck some birds near Santa Barbara, California. The passengers onboard, including Biden, were not even aware anything had happened.

Mourning doves have a mortality rate to cry over, but survive better than passenger pigeon cousins