Cambridge Republicans are sitting this one out 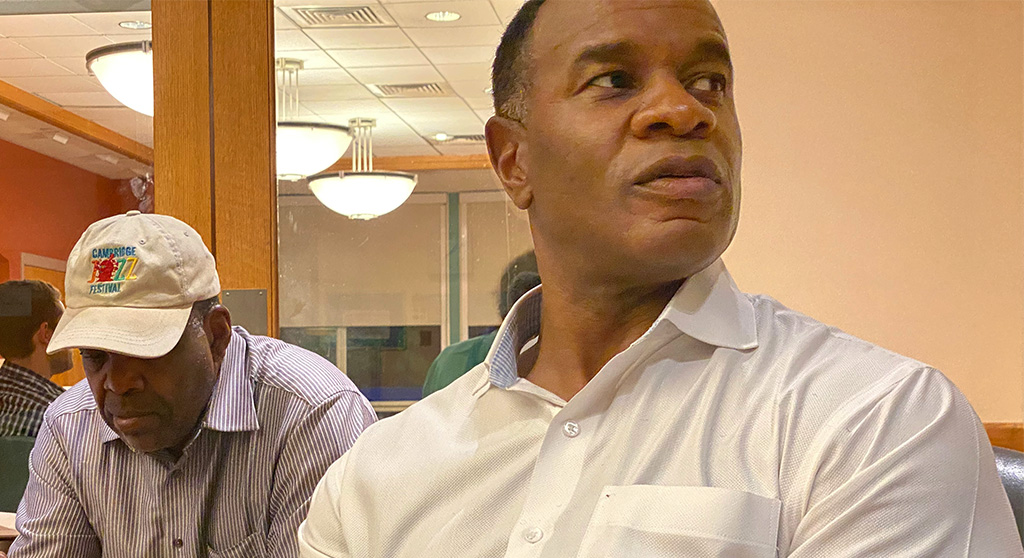 Cambridge Republicans are sitting this one out

Local party membership numbers are small, and Trumpism divides them
By Molly Farrar 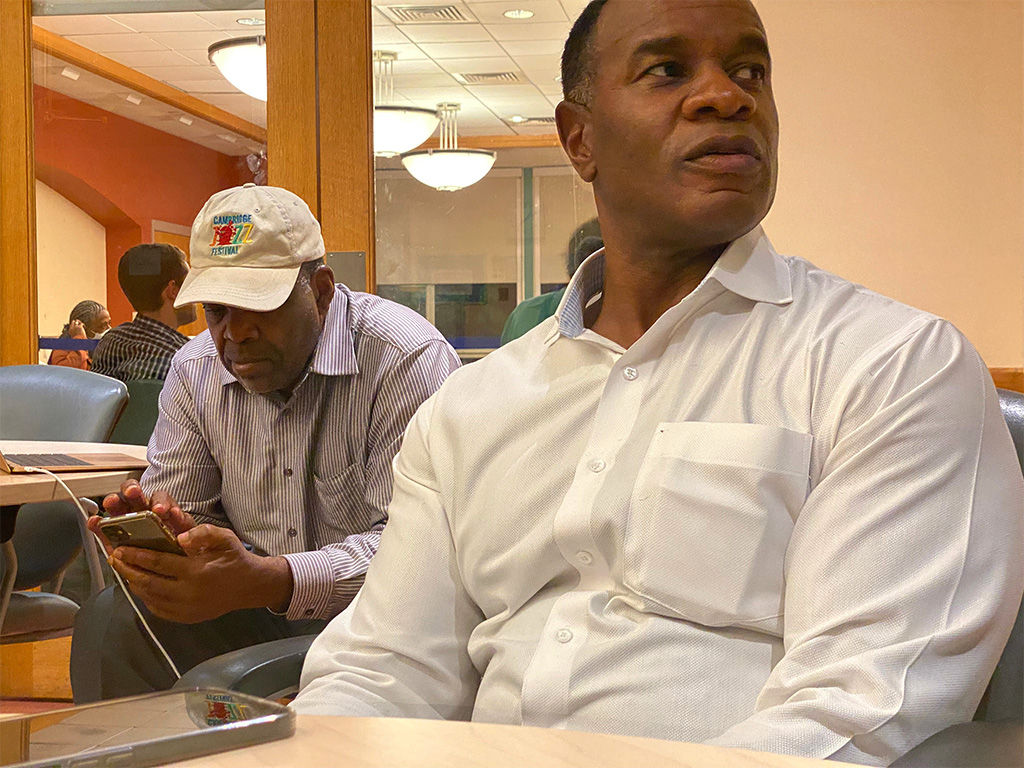 At the state Republican Nominating Convention in May, where the choice of candidate for governor may have marked the end of Massachusetts centrism, there were 19 delegates representing Brookline. Eleven represented Newton. There were none from Cambridge.

Cambridge Republicans say no one wants to be identified with the party in Cambridge, and if they are, they want no affiliation with the state party.

Donald Trump split Republicans locally and at the state level when he ran for and won the presidency in 2016, said Ethridge King, chair of the Cambridge City Republican Committee for the past six years, in an August interview. Gov. Charlie Baker was divisive too – driving a wedge between Trump Republicans and those upset with the national message of the party.

The CCRC is “on an island of our own here in Cambridge,” King said.

The convention’s choice in May to replace Baker, who leaves office in January, was Geoff Diehl, a Trump-backed former state representative running on opposition to vaccine mandates and a state ballot question on taxing high earnings called the Fair Share Amendment. 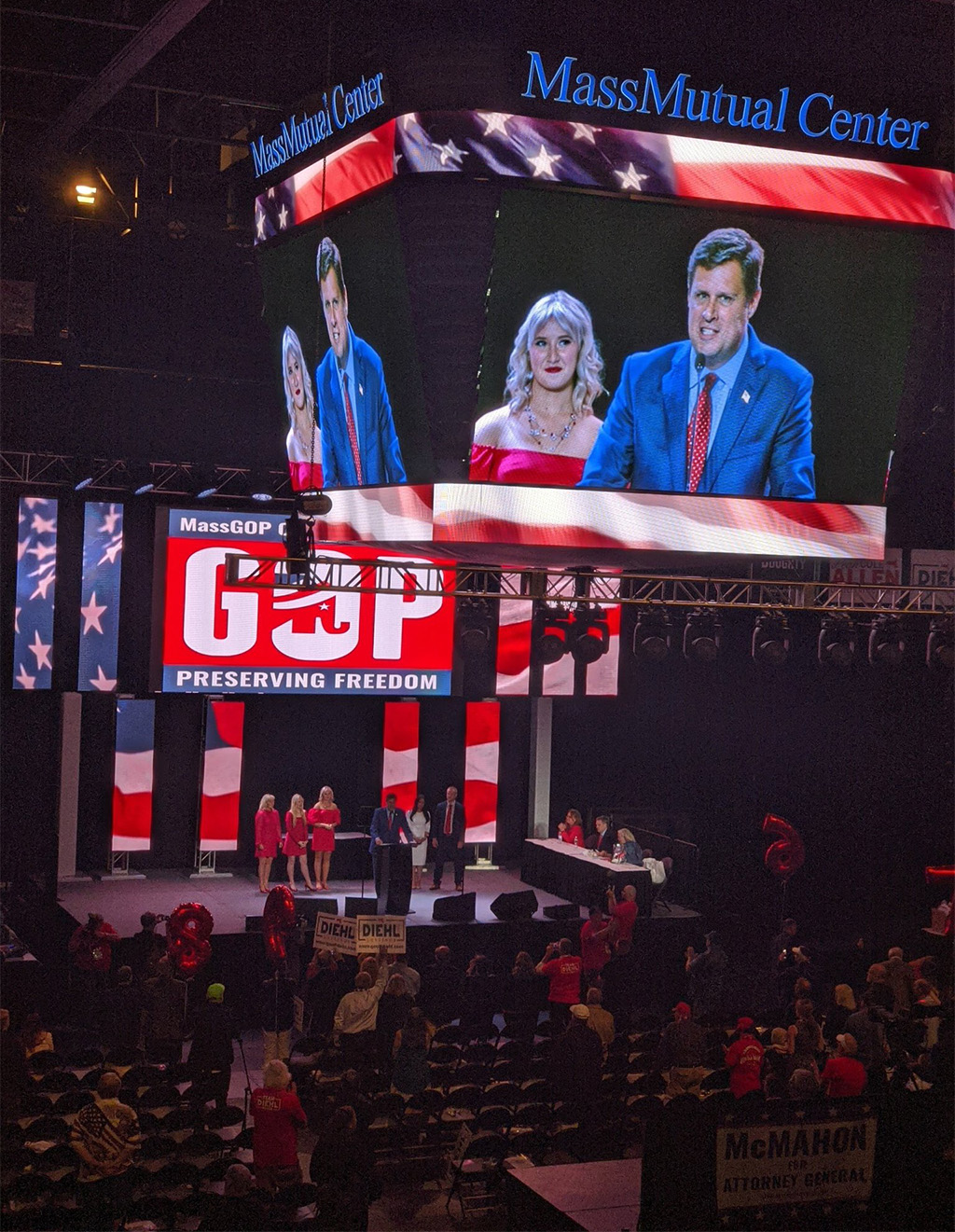 No Cambridge or Somerville delegates attended the Massachusetts Republican Nominating Convention, held May 21, at which Geoff Diehl was the favorite to run for governor. (Photo: MassGOP via Twitter)

Diehl beat Chris Doughty, a Baker-style moderate and businessman, by a 71-29 margin, according to a MassGOP press release – dooming the minority Republican state to a loss this month, political analysts say.

King believed he understood the lack of Republican convention delegates from Cambridge – or from Somerville, and the lackluster showing from all of Boston – interested in casting votes in that decision.

“It felt like the Republicans did not have a chance to regain the governor’s office, and that might have suppressed some of the enthusiasm,” King said.

It’s been years since the CCRC has been vocal as a group in advocating for local fiscal conservatism, or any type of advocacy; when active, the committee mostly organizes for local candidates, including for the City Council and School Committee, King said. It has managed to put forth candidates for four-year terms on the Election Commission board, which is made up of two Democrats and two Republicans, including King himself.

King was unsure of his organization’s membership numbers, guessing it was in the mid- to high 40s – but down from a high of only as many as 50 people, having lost participants over the past 15 years to redistricting and the usual churn of residents resulting from high real estate costs. 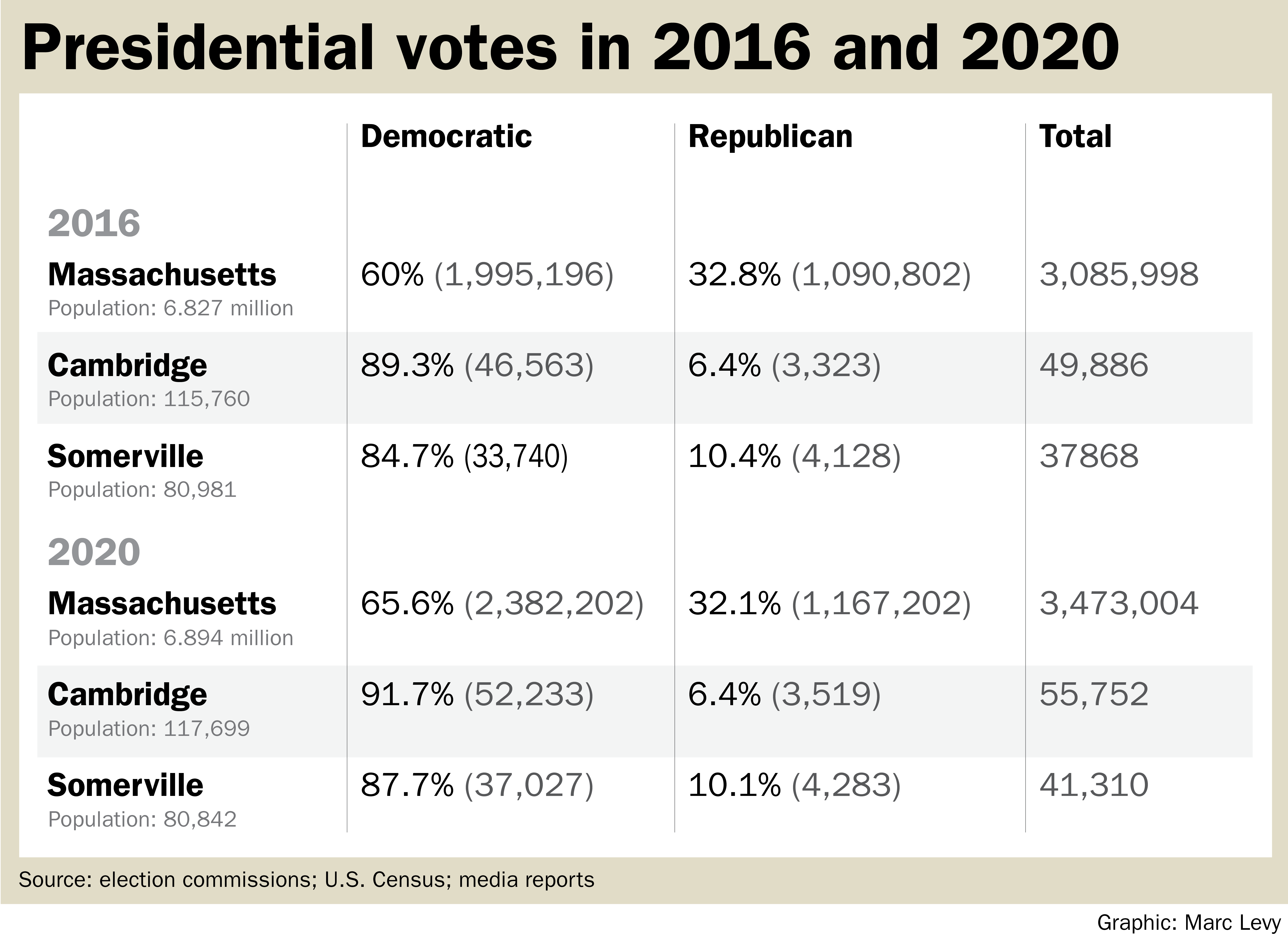 Peter Wilson, listed by MassGOP as the city’s Ward 9 Republican city chair, said the CCRC was hurt by the deaths of former leaders Henry Irving and Peter Sheinfeld in 2016. “We had a pretty active party,” Wilson said. The two deaths in quick succession “kind of took the wind out of our sails.”

Then came the election of Trump, dividing an already small pool of voters. “I don’t know if it was 50-50, but a lot of people were stalwart supporters of the president and the other half – let’s say half – wasn’t supportive. It really put a wet blanket on our activities over the last few years,” King said. “I never took a survey, but we lost members, or participation, because of the president. It’s tough. If you supported the president, you may not think the [local] party was doing enough … and if you don’t support him, you may think the party shouldn’t be supporting him. It’s just a difficult situation.”

The percentage of Cambridge voters for Trump from 2016 to 2020 was the same – 6.4 percent – while growing in numbers to 3,519 residents during his reelection run from 3,323 when he first won office; the city’s population as a whole rose in that time too. Numbers for Trump statewide and in neighboring Somerville saw small drops. Statewide, even as population rose, votes for Trump dropped to 32.1 percent of voters from 32.8 percent statewide. In Somerville, where census figures show a small drop in population, Trump’s vote fell to 10.1 percent from 10.4 percent. 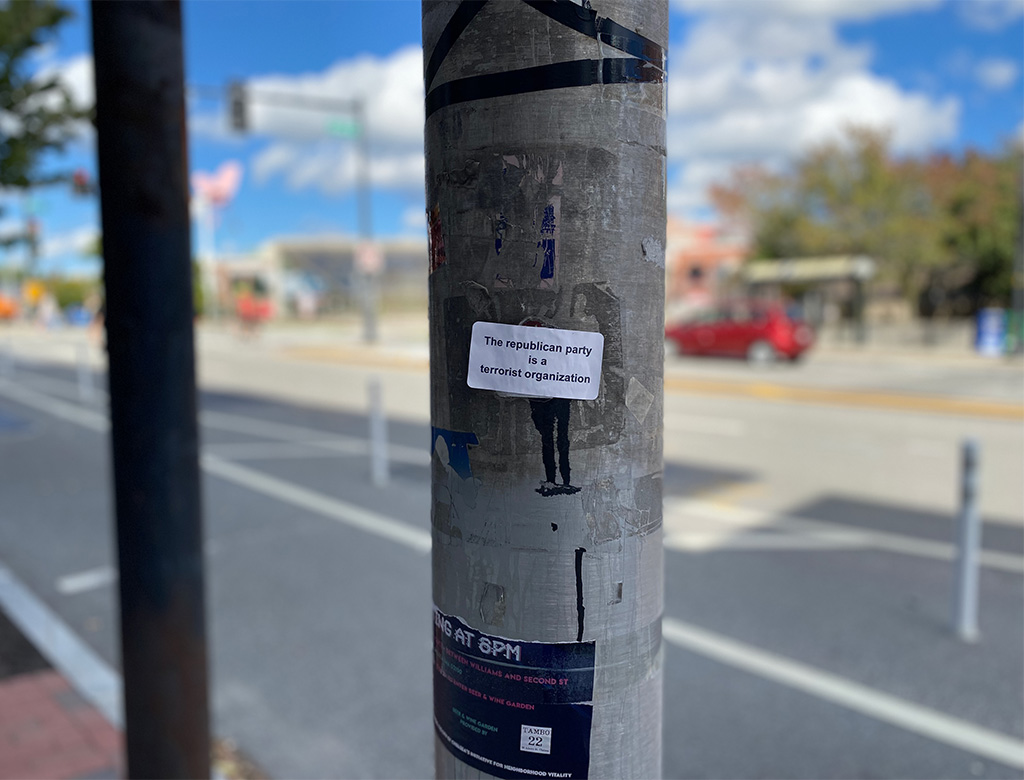 Democratic votes in Cambridge, meanwhile, grew even more overwhelming: In 2020, there were 52,233 votes for Joe Biden, or 91.7 percent of the electorate, up from the 46,563 voters and 89.3 percent who went for Hillary Clinton. It’s a city where, walking down Massachusetts Avenue, a conservative might glance over at a utility pole and see a sticker saying “The Republican party is a terrorist organization.”

Wilson, who spends half of the year in Canada, said it’s hard to activate Republicans in an “overwhelmingly Democratic-dominated city” such as Cambridge.

That affects even leadership of the committee. Wilson, who said he was active as secretary only from 2012 to 2016, is still listed on the local party website as working in that position. Mark Denko and Terwilliger are listed as vice chair and treasurer, respectively, but the website gives no contact information for them. Wilson said he wasn’t immediately sure how to contact them, either. 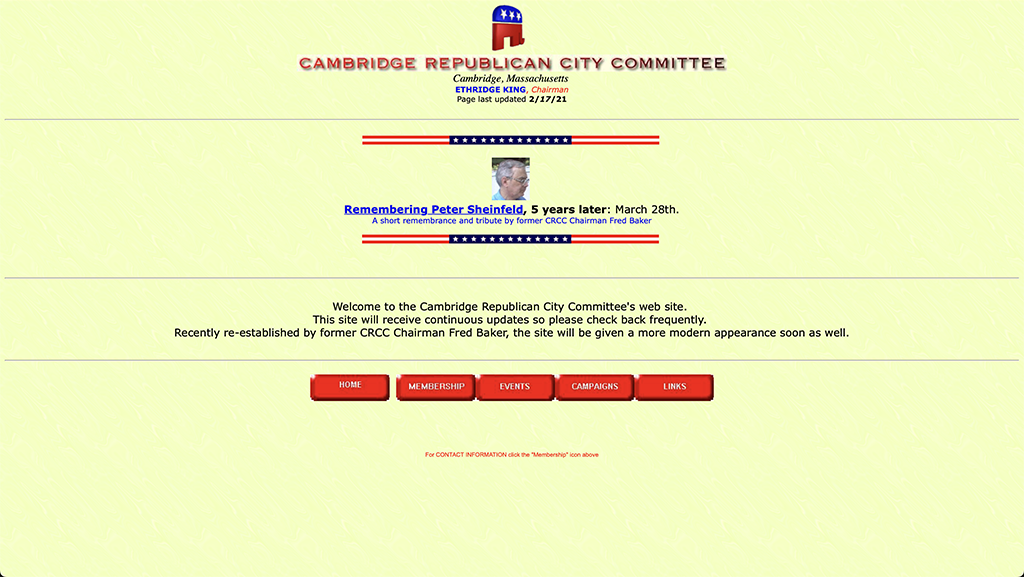 The website has other issues. It was last updated Feb. 17, 2021, nearly a month after Biden’s inauguration as president, yet still links visitors to the office of “President Trump” – leading to a 404 error on the White House website. A Pew poll in June suggests 70 percent of Republicans nationwide believe the lie that Trump is still president, or should be; but King said the site’s link to “President Trump” is not a political statement by a party going through “challenging times,” with no recent events or basic organization. When asked in August, he didn’t seem aware the link was there.

“That is definitely something that needs to be updated,” King said. “That’s on my to-do list for after the November election – to really give the committee my full attention and update the website.”

Wilson said his bowing out in 2016, the year Trump took office, wasn’t because of his personal political beliefs. He “commends” anyone working to continue the CCRC at a time local Republicans generally think it’s “better to keep quiet.”

“It’s important to have both parties represented, but I don’t think anyone expects Republicans to become a majority in Cambridge. So it’s difficult to motivate people who probably feel they can have more influence [donating] in a statewide or national election,” he said. “You’re not spending your money in Cambridge.”

King talked of his goals for the CCRC, which mostly needed rudimentary organization, such as updating the website and actually organizing for candidates at the local level.

“A lot of people equate the term Republican with all of what’s going on on a national level, and that’s not true and it’s not fair, to be honest,” King said. “We just want to be relevant and be effective in efforts, not just run candidates to say no to everything.”

The committee focuses on the local level “because when we get into the nonsense about guns, abortions and gay marriage and all that stuff, that has no impact on local policies and activities. I’m kind of not motivated by those issues, to be quite honest,” King said. “We just have to not get caught up in these hot-button national issues. I want to reach out to our registered Republicans and try to encourage them to join the party. We have to open the big umbrella again.”