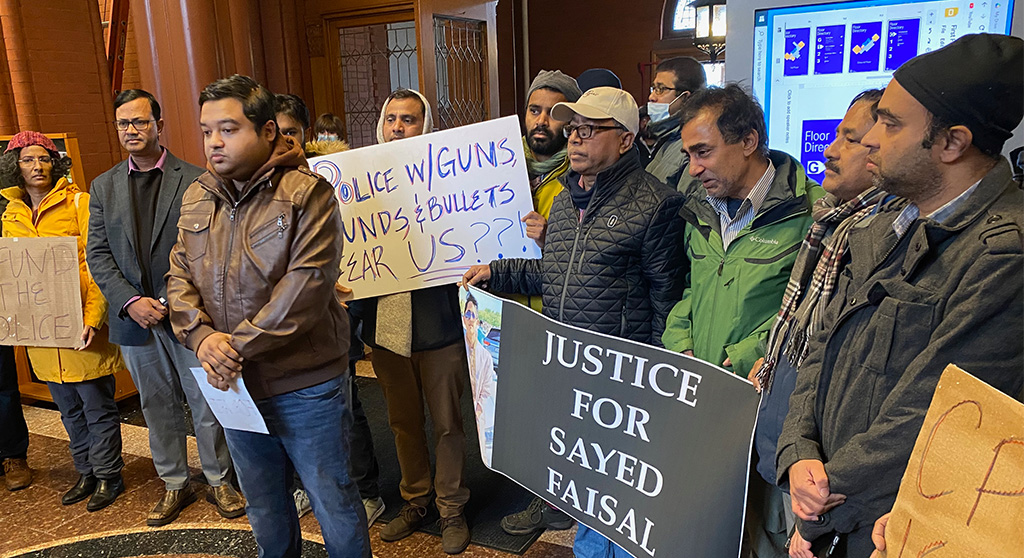 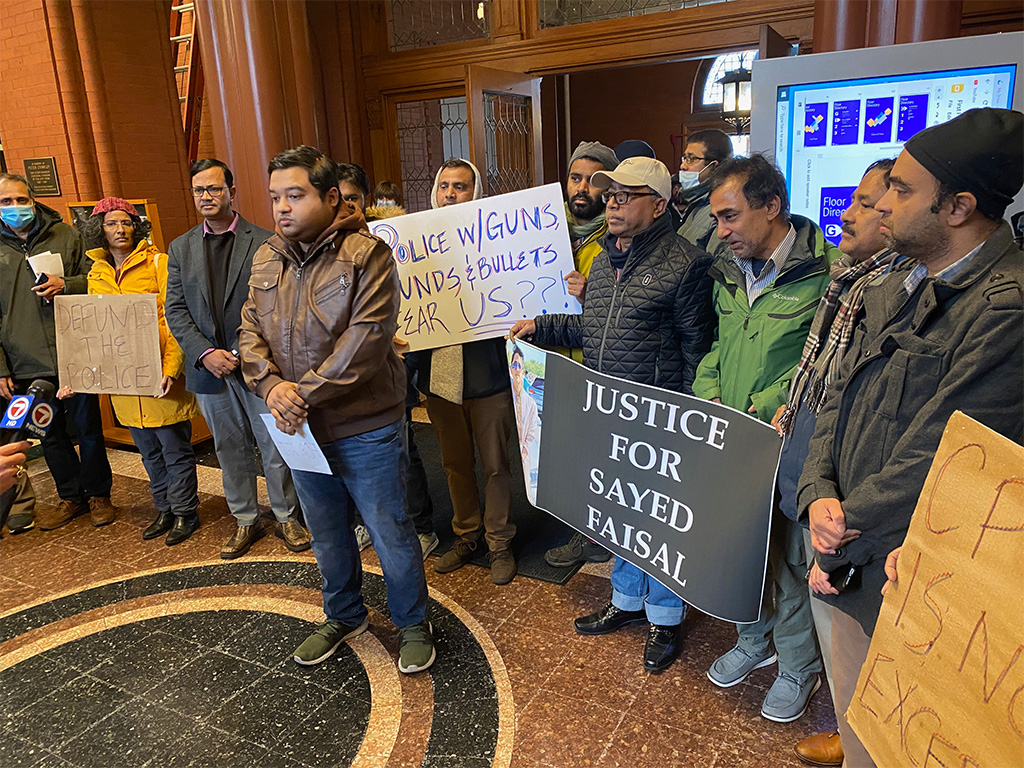 Members of the Bangladeshi community protest at Cambridge City Hall on Thursday include family of Sayed Faisal. (Photo: Marc Levy)

Support has grown for protests over the death of Sayed Faisal, who was shot by a Cambridge police officer Wednesday after moving toward police while holding a large knife, police and Middlesex District Attorney Marian Ryan said. Faisal had been cutting himself with the knife and broken glass while running from officers near his home in Cambridgeport.

The day afterward, shocked, angry and grieving members of the Bangladesh community held a demonstration at Cambridge City Hall to demand justice and accountability. A second City Hall protest is planned for at 3 p.m. Monday, and The Black Response Cambridge, formed by black residents to advocate for defunding the Cambridge police department, has issued a call to the broader community to show up.

“We wholeheartedly support and endorse this event. We encourage everyone to stand as a unified community at City Hall,” Black Response Cambridge said in an email to supporters Friday. Supporters have also organized a crowdfunding campaign for Faisal’s family that had raised $24,475 as of Saturday.

Faisal, 20, a Bengali, came to the United States with his family in 2015, graduated from Somerville High School and was taking a gap year after attending the University of Massachusetts, Boston, from the fall of 2020 to the spring of 2022, studying computer engineering, according to the university, friends and others who knew him. Some said he recently had mental health issues, while others said they saw no signs of psychological problems.

The Black Response message said police “murdered” Faisal, stronger language than some people used at the Thursday protest organized by the Bangladesh Association of New England. The Black Response Cambridge also urged people not to call 911, which may summon police, to deal with someone in psychological distress. “The police should not be involved in crisis response. If you see someone in crisis, please do not call the police; call 988, or [other] resources,” the organization said in the email, with an accompanying list.

The 988 number was recently established as a national suicide and crisis hotline; counselors reached through it may notify 911 if someone is in “imminent danger” of suicide. The other numbers listed by Black Response were Cambridge Heart, formed to provide a non-police response option for people in crisis but which is not yet responding to crisis calls; BlackLine, peer support mainly for black, indigenous and other people of color to report abuse and mistreatment; the Wildflower Alliance, a peer support hotline for people with psychiatric diagnoses, addiction or trauma that operates only from 7 to 9 p.m. Monday to Thursday and 7 to 10 p.m. Friday to Sunday; Trans Lifeline, peer support for transgender people that promises not to refer to 911; and The Network/La Red Hotline, which provides help to lesbian, gay, bisexual, queer and/or transgender people and people in other nontraditional sexual arrangements who are being abused.

In Faisal’s case, a neighbor called 911 around 1:15 p.m. Wednesday when he or she saw the young man jump through a first-floor window in his apartment house at 625 Putnam Ave., shattering it, and cut at his wrists with broken glass, according to police. Faisal was carrying a machete, the neighbor said, and began cutting himself with that, too. The large knife was later identified as a kukri, a curved blade of 10 to 12 inches.

The Black Response Cambridge was asked which of the alternatives it listed in its message would have been appropriate to call in the case of Faisal’s actions. No one immediately answered. This story will be updated when there is an answer.

Faisal’s death – the first police-involved killing since 2002 – has also revived the issue of police body cameras. Police said that when they finally caught up to the young man,  they tried to disable Faisal with a foam-tipped projectile known as a “sponge” round, but it failed to stop him, so an officer shot him. Speakers at the Thursday protest said body camera footage could have assured the community that the police account was true.

In a weekly email Saturday, city councillor and social worker Marc McGovern pointed out that the city’s former and current police commissioners favor body cameras, the police union supports it and he and other city councillors have favored it. “Unfortunately, despite agreement, the city has not allocated funds for body cameras, thus there is  no body camera footage. I will continue to advocate for these funds to be made available,” McGovern said.

Councillor Quinton Zondervan, who previously said body cameras could violate privacy, said in an email Friday that privacy issues with police body cameras “would be addressed” by the city’s technology surveillance ordinance. “I do have concerns about police use of body cameras, but it is more nuanced than simply a privacy issue,” Zondervan said. “In any case, we will be having that conversation again soon, I’m sure.”

Holding community meetings to address issues around the shooting have been raised by city officials, but no dates and times have been announced. The first item on the agenda of Monday’s meeting of the City Council is an update on the situation from City Manager Yi-An Huang and other staff.

This post was updated Jan. 8, 2022, to reflect a change in time for a Monday demonstration and to say that Sayed Faisal was “moving toward” police.