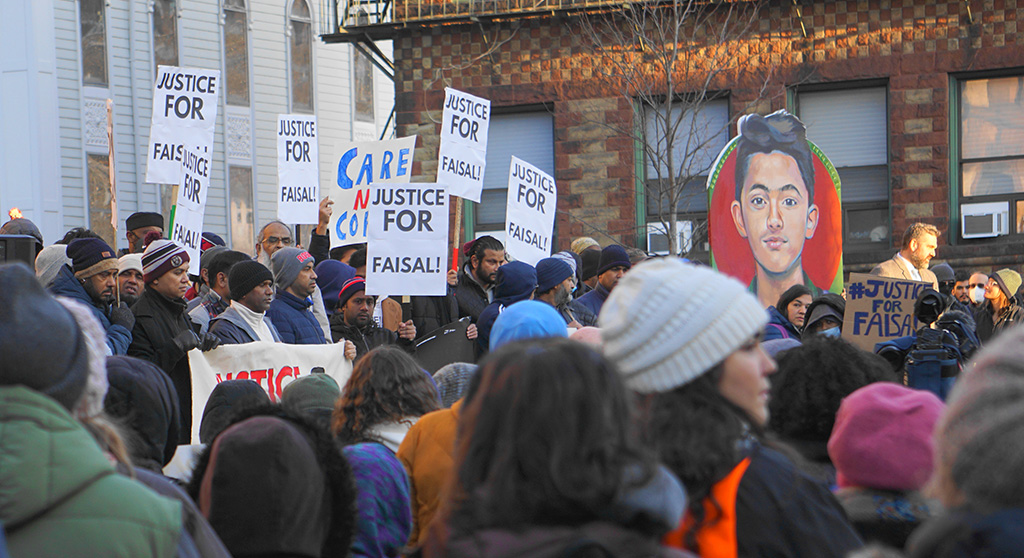 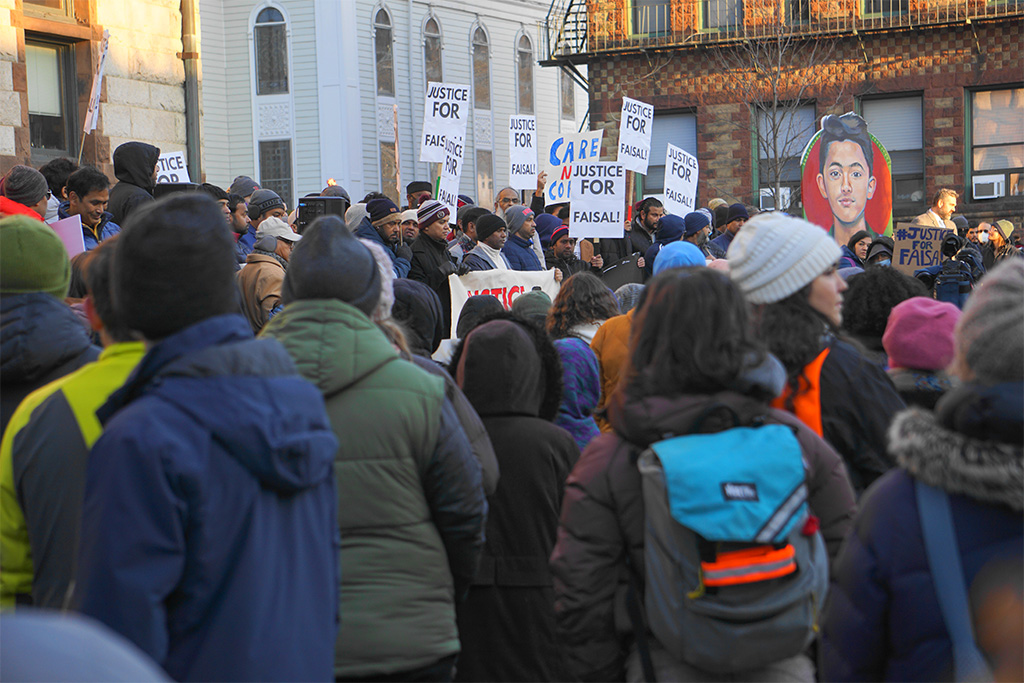 A depiction of Sayed Faisal, 20, appears over the heads of a crowd gathered Monday at Cambridge City Hall to protest his killing. (Photo: Tom Meek)

About 400 people turned out for a demonstration Monday to protest the police killing on Wednesday of Sayed Faisal, a 20-year-old Bangladeshi immigrant who was apparently suffering a psychiatric crisis. The protesters, meeting in front of Cambridge City Hall where a large “Black Lives Matter” banner hangs across the upper floors, repeated demands for an explanation and for “justice for Faisal.”

But neither is likely to come soon, an attorney said.

“Nothing fast is going to happen here,” Barbara J. Dougan, legal director of the Council on American-Islamic Relations’ Massachusetts chapter, told a suddenly silent crowd. The council is supporting Faisal’s family and working with the Bangladesh Association of New England, which organized the first protest Thursday and the Monday demonstration. The first event drew between 50 and 80 people.

Police said a neighbor called 911 on Wednesday after seeing Faisal crash through the first-floor window of his family’s apartment at 625 Putnam Ave., Cambridgeport, carrying a “machete.” The knife was later identified as a kukri, a curved blade from 10 to 12 inches long. The caller said Faisal was cutting his wrists with broken glass and the knife. 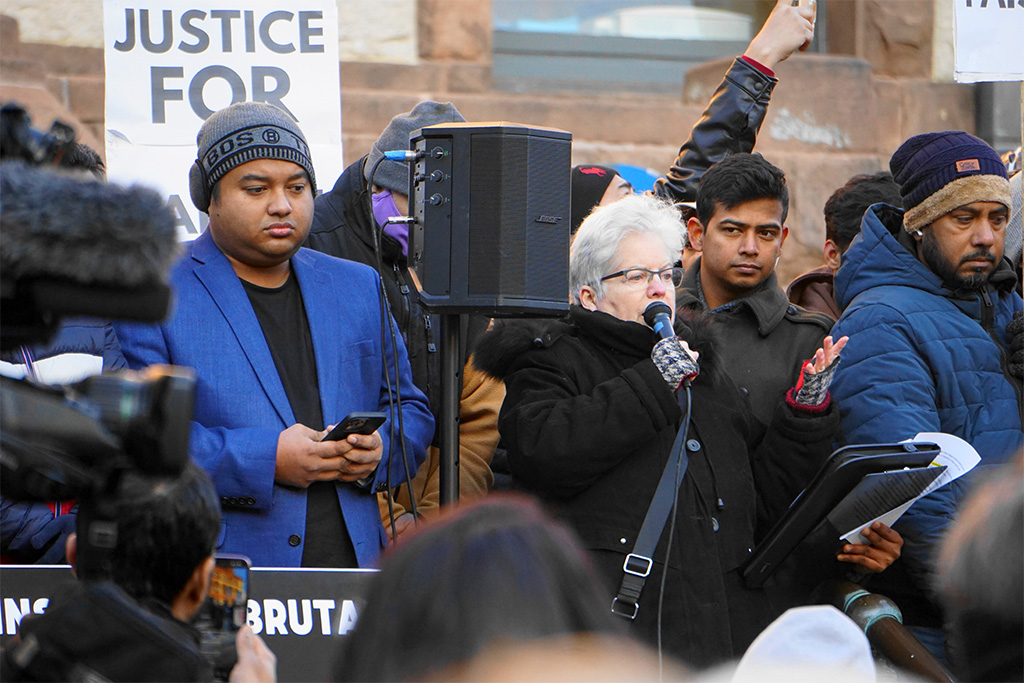 When police arrived, Faisal reportedly fled, running through the neighborhood while continuing to injure himself. He ended up on Chestnut Street off Sidney Street, where according to police accounts he was cornered in a backyard and shot with a “less-than-lethal” foam-tipped projectile after refusing to drop the knife. The projectile, called a “sponge” round, had no effect and be continued to move toward officers with the knife, police said. Police shot him and he died at Massachusetts General Hospital.

Describing the “legal process that will be unfolding” in response to Faisal’s death, Dougan outlined a long slog, starting with an investigation by Middlesex district attorney Marian Ryan. Then a judge will hold an inquest to determine whether “there is probable cause for a charge of criminal negligence against the officer” who shot Faisal, she said. The district attorney will turn over her findings to the judge, but the judge will conduct an independent investigation and can ask for evidence from other sources, Dougan said.

After the judge makes a finding, the district attorney decides whether to bring charges; the judge has no power to order charges, Dougan said. 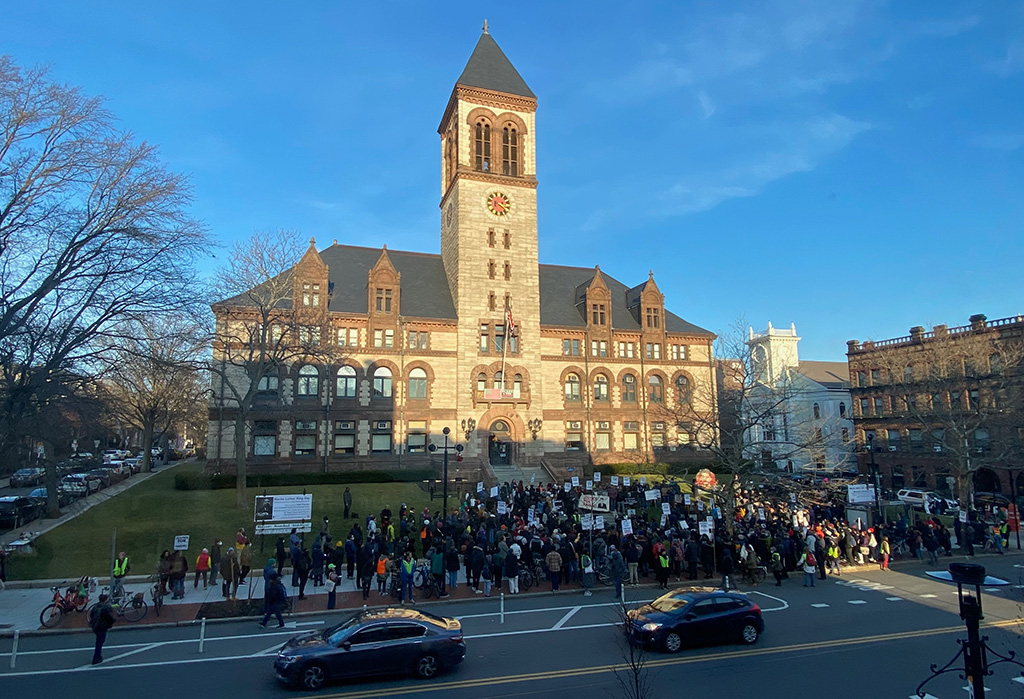 Dougan said the inquest may not be held until next year. Cases stemming from January 2022 are just now being scheduled, she said. Many in the crowd shouted “Shame!” She responded, “Shame on who?” When a protester faulted the city, Dougan said: “Cambridge city is not involved in scheduling inquests.”

She asked demonstrators to remain engaged while the process goes on for months, to support the family’s participation in the inquest – they can’t attend unless the judge agrees – and to urge the district attorney’s office to take a “neutral stance” at the inquest, not siding with the police.

Cries of grief, calls for change 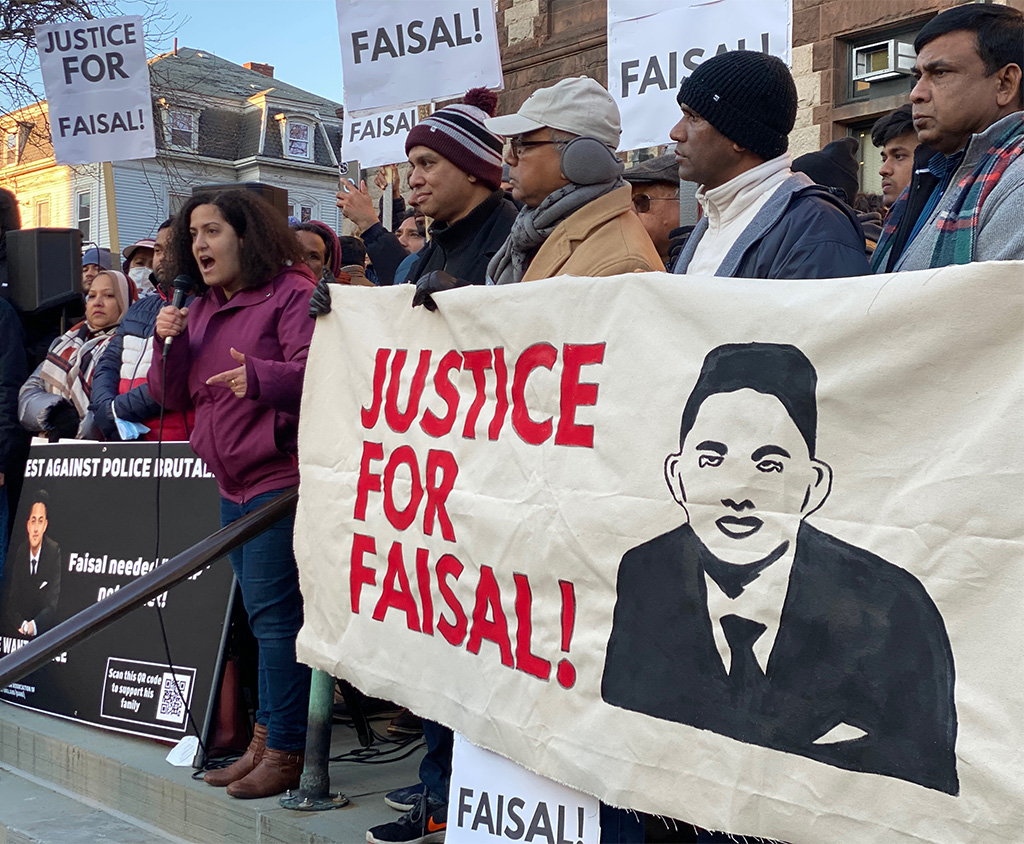 As at the first demonstration, many speakers expressed their grief. “Faisal’s family came here to the U.S., like many of us, as immigrants and to fulfill the American dream,” said Tanvir Murad, general secretary of the Bangladesh Association of New England. “The whole dream was focused on Faisal, because he was the only child of his parents.” When the police shot him, “they not only killed Faisal, they killed his parents. They have no hope left.”

Other speakers, though, addressed changes in Cambridge’s policing system, issues that have lingered for several years. As most of the Cambridge City Council and state Rep. Mike Connolly looked on from a grassy spot, Fatema Ahmad, executive director of the Muslim Justice League, said: “There are so many elected officials here today. And some of them already tried to talk to me about the politics in Cambridge. If you don’t already know who I am, if I have not already harassed you, please be ready. We are not here for your bullshit, we are not here for your promises and your lies.”

Although there is broad support for equipping Cambridge police with body cameras, including approval from most councillors, the current and previous police commissioners, and the police union, the city administration has not acted. Without video “how can [police] prove” that they acted as they said, one speaker asked.

Apparently there is one surveillance video showing Faisal from the back, running down Chestnut Street shirtless, seemingly holding a large knife across his throat. The video was broadcast by WCVB-TV, which did not say where it got the video. Meghan Kelly, spokesperson for the District Attorney’s Office, declined to answer when asked whether investigators have that video or any other film. 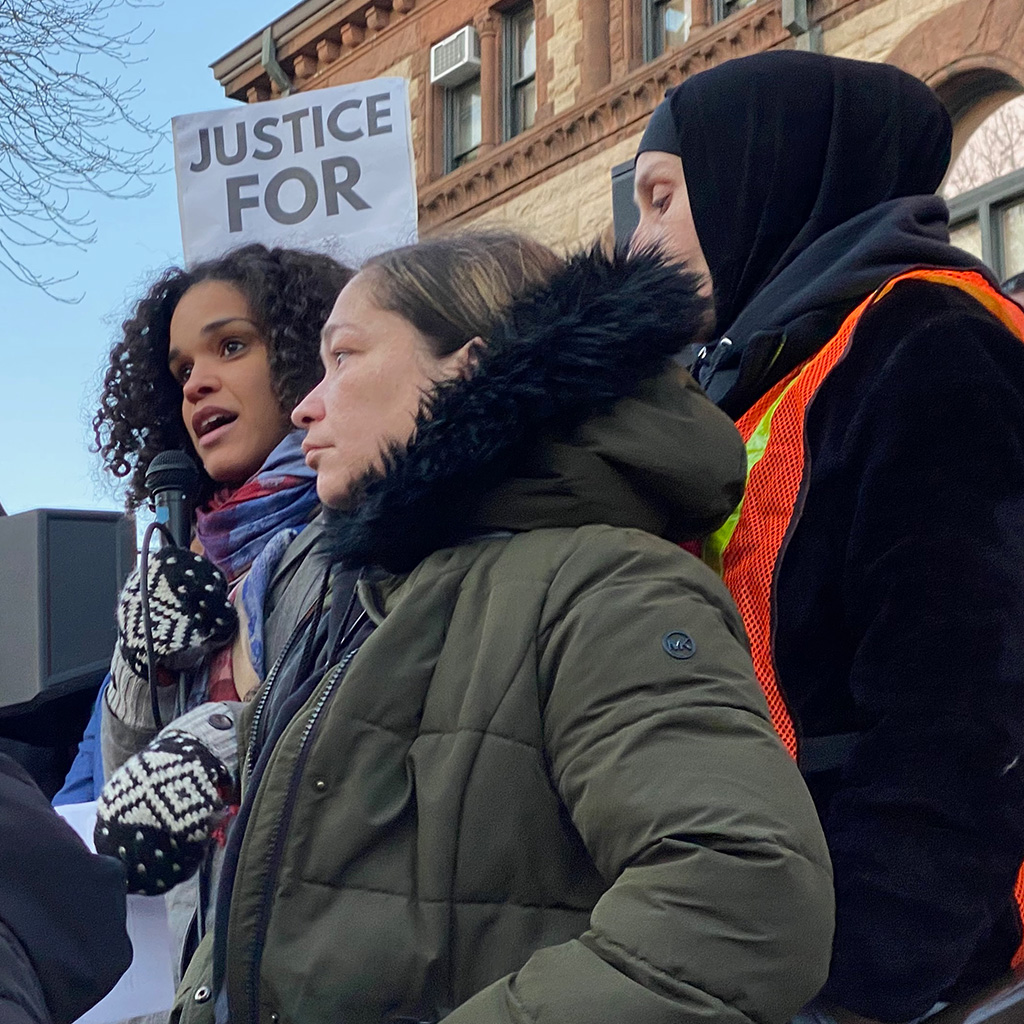 As for another stalled systemic change, when a group of residents formed the Holistic Emergency Alternative Response Team and sought to provide non-police responses to mental health crisis calls, the council instead supported a new city agency called the Community Safety Department.

The department has a budget but won’t be operating until next month or March, emergency services director Christina Giaccobe told members of the council’s Public Safety Committee in December. Two members of the task force that came up with the Community Safety Department proposal, Samuel Gebru and Loren Crowe, wrote an open letter Monday to the council and city manager asking why the city hadn’t acted to create and fund the department, apparently unaware of what has been done. Meanwhile, Heart has been trying to work out a contract with the new department.

“We believe that if members of our community are in distress or experiencing crisis as Faisal was, they should be met with patience and compassion, not with guns,” Dara Bayer, co-director of Heart, told protesters. “We need other options outside of the police.”

Heart is not now answering emergency calls, though, and not involved with Faisal’s situation.

Many organizations providing unarmed response do not go to calls involving violence.

Dougan, the attorney, and other speakers asked those at the rally to stay involved and support making systemic changes. “Yesterday, we knocked on hundreds of doors across Cambridge, on Rindge Avenue and the towers, in Cambridgeport in the neighborhood where [Faisal] was, at Harvard, at MIT,” said a speaker who identified himself as Suhail, a Muslim immigrant and an organizer in the Party of Socialism and Liberation. “And we’re not going to stop until we cover every corner of this city and beyond. And this is where we need all of you. Because we can win this with you, but we can’t win this without you. This is just a start of the fight. This is just the beginning.”