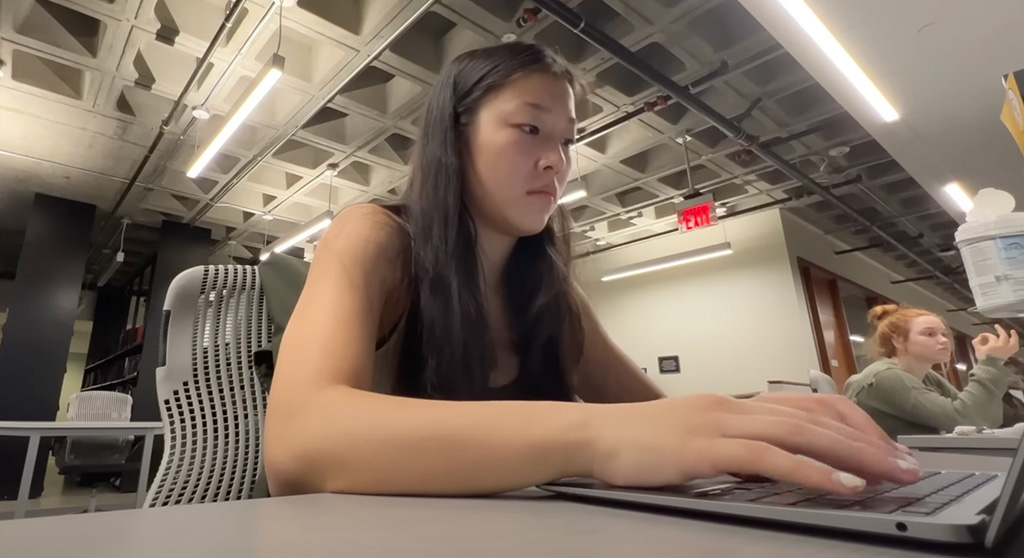 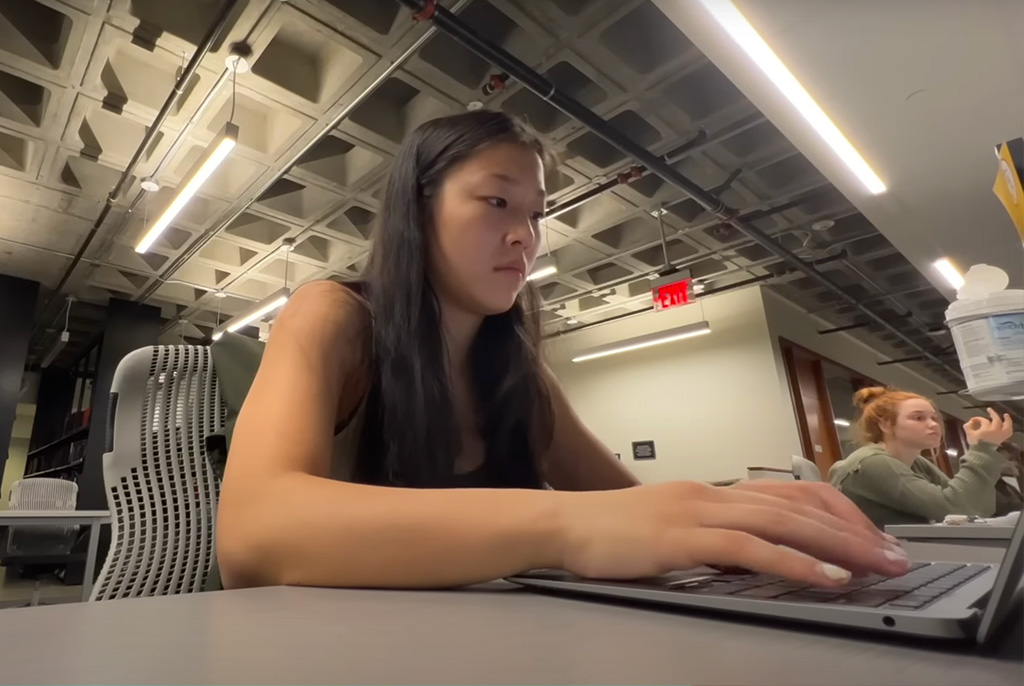 Julia Bedell in a May video, one of a series following her progress as a student at Brown University in Rhode Island. (Image: Julia Bedell via YouTube)

Harvard first-year student Isabela Gonzalez-Lawand posted her first “What I Eat in a Day at Harvard” video to TikTok in August. Using a combination of video clips and voiceovers, Gonzalez-Lawand narrated her experience eating at Annenberg Hall, Harvard’s first-year dining hall.

“This looks like Hogwarts,” a commenter said on one of Gonzalez-Lawand’s videos.

The TikTok account blew up nearly overnight. With each new “What I Eat in a Day” video she posted, a flood of likes, comments and followers arrived.

Today, her account @izgoes2college has nearly 90,000 followers. In her most viral video to date, a “What I Eat in a Day” with more than 4.7 million views, Gonzalez-Lawand eats a bagel with cream cheese, hash browns and fruit for breakfast, fries and buffalo chicken tenders for lunch and crackers, grapes, ice cream and an apple for dinner. (The entree that night was mussels, but Isabela doesn’t like ﬁsh).

“I was expecting steak and lobster at Harvard.”

Curly-haired, poised and smiley over Zoom, Gonzalez-Lawand was one of just 1,954 students accepted to the Harvard Class of 2026. When we spoke, she hadn’t yet picked a major, but she was interested in pursuing a career in journalism or communications.

Just as elite colleges grow more selective, social media lets a new generation of college content creators offer a tantalizing glimpse of life behind the curtain. Desperate to navigate an increasingly unpredictable college admissions process, high school students from across the country are turning to student-made videos such as Gonzalez-Lawand’s “What I Eat in a Day” series to help conceive of daily life on these seemingly impenetrable college campuses and comprehend the opaque world of elite college admissions.

Brown University sophomore and Youtube content creator Julia Bedell began posting videos to her current YouTube channel when she was still in high school. When she was recruited to join Brown’s Division 1 gymnastics team, she continued to document her busy daily routine through vlogs and routine videos. In spite of her jam-packed schedule, Bedell’s videos are not only aesthetically pleasing, but funny, warm and honest: Now in her second year of school studying business and economics, Bedell frequently shares snapshots of her life as a student-athlete with videos such as “A Productive College Day in my Life (First day of classes edition)” and “Get Ready with Me for my First Ever College Gymnastics Meet!” According to Bedell, whose channel has more than 279,000 subscribers, the videos where she mentions Brown explicitly tend to attract a different type of audience than her typical content.

“I am so privileged to be able to go to such an amazing school here,” Bedell said. “I think just because it is very very prestigious, a lot of people are really interested in seeing what this specific type of lifestyle is like.”

Like many other students in the Classes of 2025 and 2026, University of Pennsylvania first-year Ella Nevo was unable to attend many college tours in person due to travel and gathering restrictions at the height of the pandemic. College of William and Mary first-year Molly Christel had a similar experience. Both turned to “Day in the Life” vlogs to get a better sense of student life at the schools they considered applying to.

Unlike videos, tours and other admissions materials created by a university, student-created videos such as Bedell’s and Gonzalez-Lawand’s offer a uniquely candid look at daily life. “Even when I could go to in-person tours, it could be hard to tell how authentic and genuine the tour guides were, so the college videos gave me another perspective,” Nevo said.

According to a 2020 white paper, 58 percent of students researching colleges turned to social media to do so; just as many prospective students report turning to current students for practical tips about what to expect when they arrive on campus. “I liked to see what it was actually like at schools, assuming I got in,” Christel said.

Many of Bedell’s videos, such as “My College Dorm Essentials” and “Move into Brown University with Me” address this head on. Bedell said current first-year students will oftentimes approach her on campus, thanking her for her advice videos and vlogs.

“I think being an athlete here, that adds an extra layer to it,” Bedell said. “People are just really interested to see what this specific lifestyle looks like.”

In addition to behind-the-scenes details, some applicants crave advice for the college application process itself. How did the students they’re watching manage to “get in” in the first place?

The comment sections on Gonzalez-Lawand’s videos are littered with questions related to the college admissions process.

“Question. My daughter is a junior in HS. What are some good SAT/ACT prep courses? I know there are a lot.”

“Did you ever play sports, if so what sports did you play?” “What was your SAT score?”

“Could you share how you wrote your admissions essay?”

Harvard’s first-year class has remained stable at about 1,650 students since the 1960s, while the number of applicants seeking to ﬁll these spots has skyrocketed and only continues to climb: Between the 2021 and 2022 admissions cycles alone, Harvard saw an 8.2 percent increase in applications, according to figures published by the school. This most recent spike can likely be attributed in part to Harvard’s 2021 adoption of a “test optional” policy, which allows students to forgo sending SAT and ACT scores with their applications.

This increase in applicant volume continues to drive down admission rates. Between 1990 and 2010, Harvard’s acceptance rate fell to just 9.3 percent from 14.3 percent. By 2020, it had dropped to 5.2 percent. Last year, the acceptance rate for regular decision applicants, which excludes those who applied using an early action process, was just 2.3 percent.

“People are almost trying to figure out what the formula is to get into an Ivy League school,” Gonzalez-Lawand said. When admissions rates are this vanishingly small, however, simply having the right grades, test scores and extracurriculars isn’t enough to guarantee admission. According to a recent fact check tweeted by the University, Harvard issued only around 2,000 acceptance letters last year, but got 8,000 applications from students with perfect GPAs and 4,000 from students ranked first in their high school class.

With quantifiable measures of academic success no longer enough to stand out in a ﬁeld of thousands of other qualified applicants, students are instead trying to decipher the intangible qualities that make some applicants more successful than others. Every accepted Harvard student naturally stood out in a different way, though, making it nearly impossible to pinpoint the specific qualities most appealing to admissions officers, let alone replicate them.

Just take a subset of Harvard’s own viral content creators. Sophomore Abigail Mack (@a_vmack) first went viral for reading sections of her accepted common application essay on TikTok in 2021. Junior Ada Cruz (@adaacruz) also regularly posts vlogs and admissions advice videos of her own. While there are some similarities among these three popular posters (Gonzalez-Lawand and Mack were high school valedictorians), Mack’s admissions essay focused on her experience losing her mother to cancer, while Cruz’s discussed her identity as the child of an immigrant.

This growing inability to predict admissions outcomes has students and parents alike desperately searching for answers – oftentimes leading them straight to comment sections of Gonzalez-Lawand’s videos.

While Gonzalez-Lawand offers some practical tips, she can extrapolate only from her specific admissions experience. These creators have become the de facto experts of the colleges they attend – but that doesn’t mean that the advice they’re able to supply is applicable to every viewer, or that they’re even equipped to answer every question they get.

“I have a lot of international students who have questions, but I don’t know anything about that process,” Gonzalez-Lawand said. Even when it comes to her own application process, she can’t always offer the concrete formula viewers demand.

“You have so many parents who want to send their kids to college, especially when we’re talking about the first-gen population,” said Gonzalez-Lawand, herself a first generation, low-income college student. “They come to you and then ask these questions, but you don’t really have an answer.”

Rather than making it easier to crack the admissions code, the ability to access college-related content constantly via social media has simply made it easier for some students and parents to hyper-fixate on a process largely determined by factors outside of their control.

“I watched so many videos that I was constantly thinking about college,” said Christel, who went through the college application and decision process last year. While she often found college-related content to be practical and helpful, she now believes that immersing herself ultimately contributed to her stress levels, rather than alleviating them.

That didn’t make doing so any less tempting.

“I watched a lot of Ivy League reaction videos of people getting in,” said Gonzalez-Lawand, reflecting upon her own college process. In this popular video format, high school seniors videotape themselves opening admissions decisions from the various colleges they applied to.

Some of these videos are absolutely brutal – it’s not uncommon for a student to wade through rejection after rejection. But, they also capture moments of pure bliss, of students surrounded by friends and family, crying happy tears as they open acceptance letters from some of the most prestigious universities in the country.

“For me, when something is so romanticized in your head, you kind of continue to do that online,” said Gonzalez-Lawand, who dreamed of going to Harvard when she was younger. For high school students steeped in the stressful world of college admissions, watching someone else experience the relief and validation they so desperately crave can be a useful source of motivation.

When you want something badly enough, it can be diﬃcult to look away.

These student-created videos can also help set realistic expectations. For instance, as a Latina and Arab student, Gonzalez-Lawand hopes that her content will help other students from marginalized communities see that there can be a place for them at Harvard, despite historically catering to white and wealthy students. She also wants to be honest about the difficulties they may encounter attending a PWI, or predominately white institution, such as Harvard.

“When you get here and you realize it’s a lot harder than you originally anticipated, it can be a letdown,” Gonzalez-Lawand said. “You have to be okay with taking up space.”

Gonzalez-Lawand found that when she was going through the college selection process, she saw very few videos from students of color. This lack of representation left her feeling unprepared to navigate finding community as a person of color on Harvard’s campus.

“I think a lot of people who make college content don’t really talk about how diﬃcult it is to be a college student, especially when we’re talking about being a college student in a non-POC space,” she said.

“Just personally, I’m not gonna go out of my way to record myself on a day when I’m not feeling my best or just really struggling,” said Bedell, who instead tries to find a balance – offering her viewers a transparent look at college life while maintaining certain boundaries about what she shares online. “It’s not always going to be sunshine and rainbows every single day.”

In spite of these challenges, Bedell and Gonzalez-Lawand are united in a goal: to make the content they longed for when they were going through the college process.

“I want people to see that there’s somebody who looks like them on this campus,” Gonzalez-Lawand said. “To see people holding on to that little piece of hope that I give them I think is super rewarding. It also shows that representation matters so much.”

“It’s very helpful to have someone to look up to,” Bedell said. “What I’m trying to do is be the person that I wish I had when I was in their position.”