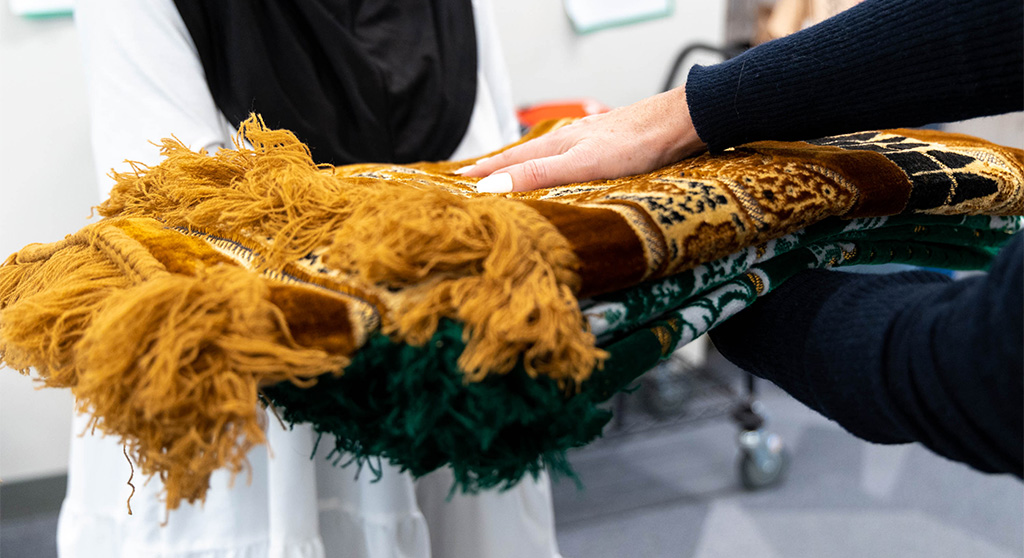 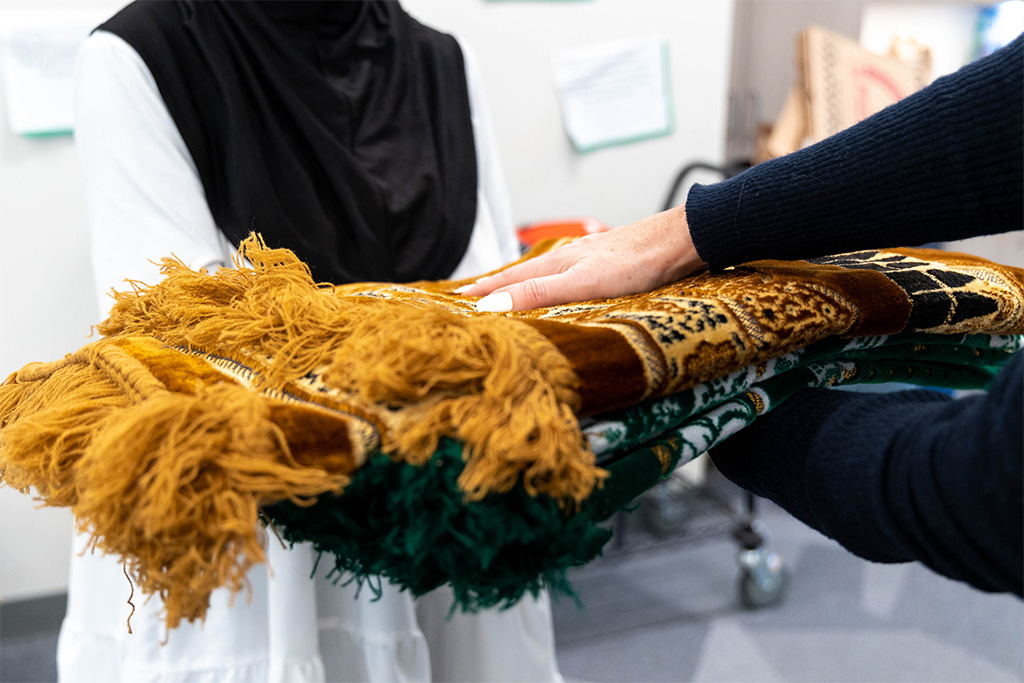 A prayer rug is readied for placement at Cambridge Street Upper School in a ceremony Monday. (Photo: Cambridge Public Schools)

Cambridge Public Schools highlighted the creation of sacred spaces in all of its schools on Monday, making the district the first in New England to establish such spaces for students and staff members who observe spiritual or religious practices needing regular prayer, officials said.

“Prayer is an obligation for Muslims,” said Zakkiyya Witherspoon, co-founder of the Muslim Community of Cambridge Public Schools. “To have a space to pray is very important so that we don’t have to sneak around and pray in closets and behind bookcases. It normalizes the activity.”

Many school districts allow daily prayer during the Muslim holiday of Ramadan, “but as equity and inclusivity are cherished values and a throughline in all of our work, our prayer spaces are accessible throughout the year,” the school district said in a press release.

The creation of sacred spaces was the biggest action taken around the area of faith in the district since January 2010, when the School Committee voted to include an Eid holiday for Muslim students in public schools. The step gave students a day off to celebrate the holiday, as Christian or Jewish students get long had to observe their own religious holidays and celebrations.

The MCCPS began as an advocacy group in 2021 and evolved into a district employee resource group in the fall. The group advocates for the Muslim community, Witherspoon said, because some Muslims may not feel comfortable advocating for themselves in the workplace or at school.

The group was asked by some district staff members and parents to work with CPS to create spaces across all district schools where Muslim employees and students could pray.

Manuel J. Fernandez, Cambridge Street Upper School principal for eight years and the district’s chief equity officer and head of the Office of Equity, Inclusion and Belonging since July 2021, led the district’s team to provide the spaces.

Fernandez said that the district began discussing them in the fall of 2022 at the request of the MCCPS, and that he and his team met with principals, visited all the proposed spaces and worked to make the spaces attractive and welcoming. This included buying prayer rugs selected by the employee resource group.

Planning moved swiftly, and the formal sacred spaces were announced to the school community in early December.

Cambridge Street Upper School has had a sacred space since 2017 where Muslim students could pray, but it was not prominent or formalized, Fernandez said.

CSUS students were early adopters who began using the current sacred space last spring: Muslim students fasted and prayed during Ramadan, and Christian students reflected during Lent, Witherspoon said. Students who practice different religions are all welcome to use the spaces, which are kept image- and object-free, aside from the rugs. to show respect for all faiths.

At the upper school, the sacred space is a section of a large community room set apart by a large divider that provides privacy for those at prayer. If the room is in use, there is an alternate space in the school where students can observe their religious traditions.

Students may request up to two prayer slips per day from the main office to give to teachers before leaving to pray. They can adapt the times they pray to minimize missing class time, said Ilwaad Muhumed, a student at the upper school.

“Because praying to me is very important, it’s very nice to have this space to do that,” Muhumed said. “Last year I had to bring my own prayer mat, but now the school provides the rugs for us.”

This post’s initial version was updated Jan. 23, 2023, to correct that there was no ceremony Monday with officials gathered to introduce the sacred spaces. It was updated Jan. 24, 2023, with new material throughout by the author.