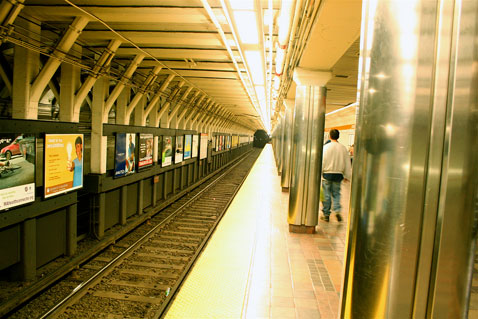 Police said a woman with Cambridge and Somerville addresses was involved in an assault Monday at the Downtown Crossing T station in Boston. (Photo: Bart Everts)

An attack on a disabled man Monday at the T’s Downtown Crossing stop led to the arrest and arraignment of Karen Akiba, 22, of Cambridge — who also lists a Somerville address — and Watertown resident Byron Lashus, 32, the Suffolk County District Attorney’s Office said Tuesday.

Transit Police arrested the two same day along with a third suspect, said Jake Wark, the office’s press secretary. In Boston Municipal Court, Akiba and Lashus were arraigned on charges of assault and battery with a dangerous weapon (in this case, a shod foot) and assault and battery on a disabled person — a man being treated for schizoaffective disorder.

Boston Municipal Court Judge Patricia Bernstein imposed $2,000 cash bail for Akiba, while Lashus walked without bail when attorney Robert Solomon said he was helping in the investigation. Bernstein ordered the suspect to have no contact with the victim or any witnesses. It was unclear whether there will be an arraignment for the third suspect Tuesday, Wark said.

The victim said an argument he was having with Akiba was taken as a cue for a beating by the men she was, according to The Cambridge Chronicle, which quotes Transit Police Superintendent-in Chief Joseph O’Connor as saying “there is no logical reason why the victim in this case was assaulted.”

Akiba was represented by attorney Paul Mishkin. A LinkedIn account for a Cambridge resident in her name says she graduated from Cambridge Rindge & Latin School and, in March 2007, began work as a cashier and merchandise associate at Dearborn Academy, a state-approved special education day school in Arlington. She ended her time there as a kitchen assistant in June 2008, the page says, and has been attending professional development classes at Cambridge Works and the city’s Department of Public Works, including landscaping and other work at the city-owned Fresh Pond Golf Course.

Update: A third arrest was made of Maryanne Hamilton, 29, of Jamaica Plain, according to The Boston Globe, which said the victim suffered cuts and “swelling to his facial and torso areas.’’ From the Globe:

Joseph O’Connor, MBTA Transit Police superintendent-in-chief, said the victim injected himself into an ongoing conversation among the group, telling them that they should not use the word “hate.’’

“It was nothing to rise to the level of the person being assaulted,’’ O’Connor said Tuesday of the victim’s comments. “It was really small talk that was occurring on the platform … There was no reason for them to attack him. He lacks the capacity to really engage them in a real conversation.’’

O’Connor added that the victim’s disability restricts his ability to communicate with people. Conley’s office said the victim is being treated for a schizoaffective disorder.